Menu
Log in
Register
Navigation
Install the app
More options
Contact us
Close Menu
You are using an out of date browser. It may not display this or other websites correctly.
You should upgrade or use an alternative browser.
Resource icon

Overview Discussion
I have two Pygmy Goats that are 1 year old almost exactly. They have lived in my backyard their whole life, except the occasional trip into the house to snoop around or shelter from a Hurricane (I'm in North Florida).

This winter it has been crazy cold in North Florida and I struggled with how I would keep them warm or if I even needed to do anything extra besides put out new dry hay/straw for them in their house. I put a heating lamp close by one night and then decided I better take it down after doing some research that it may be worse for them to have the extra heat and start relying on it (although it didn't give off much heat anyways).

One day I noticed that Festus was losing weight and seemed so much smaller than Fern kind of out of no where. I didn't notice much difference in his behavior or anything but just that he was smaller. The temp for a few days dropped very low at night (low 20s) and then would get higher into the 60s sometimes during the day. They both seemed fine, then one day, last Friday, I came home for lunch and saw Festus lying on his side. I ran to them and he was hollering and seemed to be in pain. Clearly I was very upset and worried that he was dying. I called my vet, wrapped him in a towel and my dad drove us to the vet about 25 min away. He bellowed the whole way there and I cried the whole way there. The vet took his temperature and it wouldn't read on the digital thermometer, he was hypothermic. She said she wasn't sure what was going on but she would do everything she could to save him, but still couldn't promise me that he would pull through. I went home and took Fern's temperature and it was normal (I still let him sleep inside in a crate every night since last Friday anyways ). There was clearly an underlying issue with Festus that caused him to be affected by the weather so much more than Fern.

The vet kept me updated on his progress all weekend, and on Monday she called and told me that she would like to keep him one more day. He had temporarily gone blind on Friday and started seeing again on Saturday, I guess due to his body shutting down from low temperature. His temperature was regulated, but he still couldn't stand up on his own. They could stand him up by Monday and he would stand on his own, but for some reason was having a hard time getting his front two legs to lift himself up. He was eating and drinking like crazy and pooping and peeing. They had given him an IV to warm him, and 5 days of antibiotics along with parasite treatment and a vitamin B boost.

We picked him up on Tuesday and he was about the same. His appetite was great and I thought that it was a great sign! I got small adult diapers for him and let him wander around the house. I was so worried about him so the first night I wrapped him in towels and snuggled him on the couch where we both slept until about 5AM and I put him in his kennel with a heat lamp on him (still inside). He seemed to be doing so much better and by Wednesday if he would fall (I have hard wood floors and he slips on them regularly) he was able to lift himself back up. Wednesday night I needed some sleep so I thought he would be fine in his kennel after some snuggles on the couch.

I woke up at 5 AM to him hollering and ran to the kitchen to him on his side again, but this time not as severe. Mind you, he was inside my house set to 72 degrees, in a kennel with 2 big towels under him and a puppy pad and a heat lamp and Fern was in a kennel next to him (happy as a lark). I raced to get some homemade heating pads (socks filled with rice that I warm in the microwave) and wrapped him in a blanket and snuggled him with the warmers. My thermometer stopped working of course when I needed it most to see how severe his temp was. I used my hair dryer and even gave him a little honey, which even while he wasn't feeling good he would have knocked me over to get to it. It took about 45 min for him to get warm feeling again and we both fell asleep for a little bit after that. I talked to the vet once it was a decent hour and she said I did all the right things and I got his temp back to 101.5 which was normal she said (between 101 and 103). I kept him in my room which has a large carpet rug and kept towels around and his hay, water and minerals close by. He seems to be getting back to normal although he seems to be weaker again. His temp that night was 102.5 the highest it had been since he was home. He slept with me again last night of course, and today he still seems weak and doesn't walk around all that much. I checked his temp and it was 100.8 this morning.. lower still. He is back with some heating pads and blankets, but I am so worried that his body won't go back to normal and regulate his temperature. I will be home with him all weekend to make sure he gets the best care.

Has anyone had similar experience with their goats or other animals with hypothermia? Is it likely that he makes a full recovery? Does it usually take a week or more for them to get back to a somewhat normal state? Is there anything I can do or not do to help him start having a normal temperature on his own until the weather warms up? 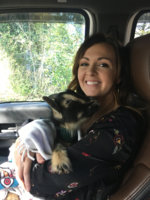