Menu
Log in
Register
Navigation
Install the app
More options
Contact us
Close Menu
You are using an out of date browser. It may not display this or other websites correctly.
You should upgrade or use an alternative browser.
Resource icon 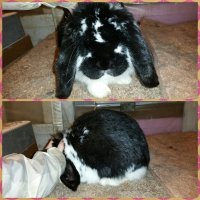 ​
The French Lop Rabbit Breed is a native of France developed in the 19th century by Mr. Cordonnier, a book binder. In 1853, Mr. Cordonnier started by breeding English Lops with some of the larger French breeds of the era, the Normand (also known as the Picard) and the Rouennais which is now extinct. This breed was originally developed as a meat producer not a show rabbit. Though it existed in France for many years, the French Lop was not recognized and given a standard until March 25, 1922.

It is thought that the French Lop was imported to American sometime during the early part of the 20th century because it was one of the first breeds recognized by the National Pet Stock Association (now known as the ARBA). The early standards were much the same as the English Lop, but with shorter ears.

Though shorter in body length, the French Lop has a shape similar to the Flemish Giant. When sitting erect, the ears of this breed should hang at least 1 1/2 inches below the jaw line. The ideal coat length for this rabbit is 1 1/4 inches with colors and markings conforming to the Lop Color Guide:
• The Agouti group in chestnut, chinchilla, lynx, or opal coloring 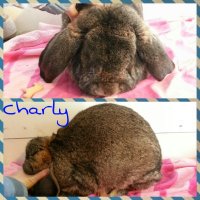 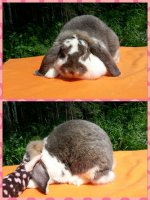 • The Self Shaded group, which consists of frosted pearl, sable, sable point, seal, smoke pearl, or tortoise (in blue, black, chocolate, or lilac) 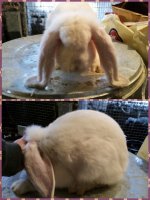 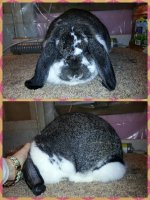 • The Wide Band group, which includes the colors cream, fawn, orange, or red 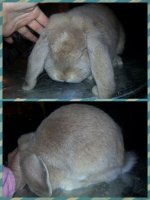 • The Self group which is Black, blue and other colors without ticking 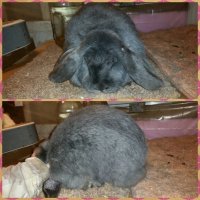 Senior Bucks 8 months and older should weigh 10 1/2 pounds or more. Senior Does should weigh 11 pounds or more. Intermediate Bucks 6 to 8 months old should not be over 11 1/2 pounds and Intermediate Does should not be over 12 pounds. Junior Bucks and Does under 6 months old have a minimum weight of 5 1/4 pounds and maximum weight of 10 1/2 pounds.

French lop rabbits can be characterized by their rather oversize shape and
their endearing personality. These pets thrive on attention and they are the result of a cross breeding between the Normandy Giant, the Flemish Giant and the English lop.
These rabbits are very popular in rabbit shows. In the United States, they are commonly referred to as “king of the fancy”. These rabbits make extraordinary pets because of their kind nature. These rabbits love to play and be cuddled, which makes them perfect for young kids.
French lops can be recognized by their rather large bone structure. Even though the French lop’s ears are not as long as its English cousin’s, they are still big enough to make them stand out. Their coat is usually longer than on most rabbits and they develop what are often called dust ruffles or trousers
around their bottom.
French lops can be found in all kinds of solid colors, but also broken patterns as well. It is recommended that you do not breed your French lop until it reaches 9 months of age. But it’s very important that the female French lop has her first litter before she reaches her first year.
After the first year, the doe’s pelvic bones begin to merge which could make natural birth more difficult. Female French lops tend to have big litters that can range between 5 to 12 kits, so make sure that you are prepared for that. Since French lops tend to be larger than most, they are rather sedentary and
don’t require too much activity. They are social pets and they make wonderful family pets when bred right. It is always recommended that you pair your French lop with a partner for company.
Like most rabbits, the French lop’s diet is mainly composed of hay and pellets. You can also give your rabbit commercially manufactured treats made especially for them. French lops enjoy veggies such as romaine lettuce, basil and coriander. However, you should never feed your pet gas inducing foods such as cauliflower and broccoli, that could be fatal t them.
All in all, French lop rabbit’s make great family pets and they usually require less care than other breeds of lop eared rabbits. If you want to learn more about French lop rabbits, you should attend a rabbit show near you and ask breeders for advice. This way, you’ll know what your pet needs to grow happy and healthy.


Diet when owning a Giant breed is also extremely important.

You should always pick a feed and stick with it. The constant change is hard on their guts. If your rabbits are doing well on something don't switch because something is cheaper. If you are going to switch, switch because it is a better feed or because you can't get the other one anymore.

Fiberis an extremely important factor. Anything below 18 is really too low. Rabbits can do fine on lower but for the larger breeds many think they do better on the higher. Fat is also important. A minimum of 2.5- 3 is better.
Proteinis another extremely important piece of the nutrition puzzle. A giant breed such as the French Lop should be on an 18% protein blend. In some areas this can be hard to find in a quality feed but for their development and overall health of your giant breed rabbit.

I personally struggled with finding a feed that worked best for my rabbits. It was a nightmare for a while. My two French lops started losing weight and there was nothing I could do to fix it. They were eating fine, getting treats and exercise and still, dropping weight and deteriorating. I found out that they needed a feed with 18% protein in it and most feeds only contain 15-16%. I was feeding a feed with 15% and it just wasn't enough even with treats and fresh veggies daily. Once I started learning more about it from experienced breeders they turned a major corner and started gaining their weight back and becoming my healthy and happy rabbits they were before. Most people are unaware that not all feed is equal for each breed. Their size, activity level and portions all determine which feed to choose for your rabbit. The issue is how do you know what your breed needs? If you are buying from a breeder, they should inform you what to look for in a feed for that specific breed as well as send you a small bag of feed to help transition your new rabbit over to what ever feed you decide to put him on.