HI All,
I introduced myself yesterday in the welcome thread and mentioned that I ended up on your site bc of the baby Geep I have. To give some back ground on me, I grew up raising horses pigs and cows- but never sheep or goats. In researching any information I can to successfully raise the little Geep, I found your message board.

So how did I end up with a Geep? The short version is this, I was visiting family during Christmas. I stayed at an inlaws family members home and helped take care of their barnyard animals (the owner was out of state). One morning we went out to feed and found 2 little babies near the only sheep in the pasture. (Their goats were all inside, a female sheep and billy goat were alone in adjoining pasture). The momma sheep showed no interest in the babies and due to the cold weather, them being premature and barely breathing, we intervened. The female did not make it more than an hour- she was maybe 2 lbs. The male is who survived and the owners had no interest in bottle feeding a weakling. Told me to take him if I wanted to try and save him. And here I am a month later...(btw, the owners seemed confused that their sheep was even pregnant).
Here are some pics of Sammy..His coat does look more goat like but its all super curly wool underneath, especially around his neck. He was about 5 lbs at birth and is now 13 lbs at day 33. 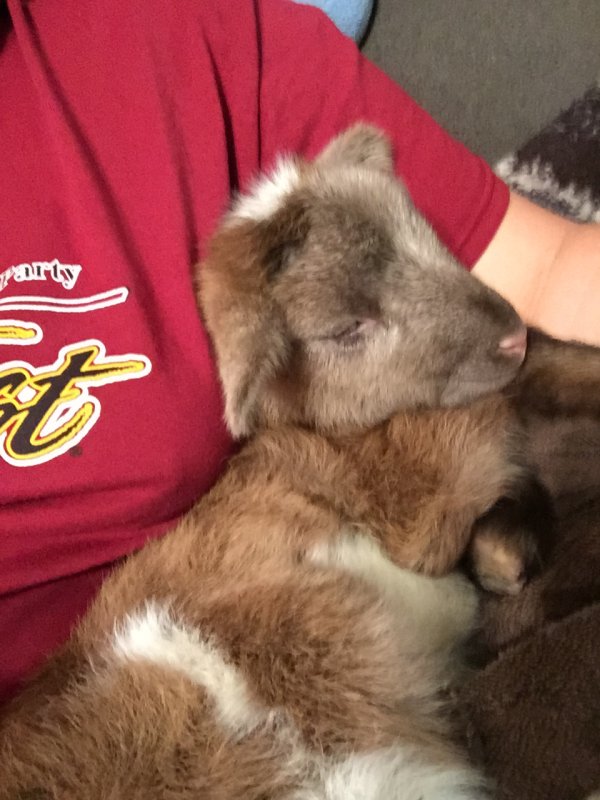 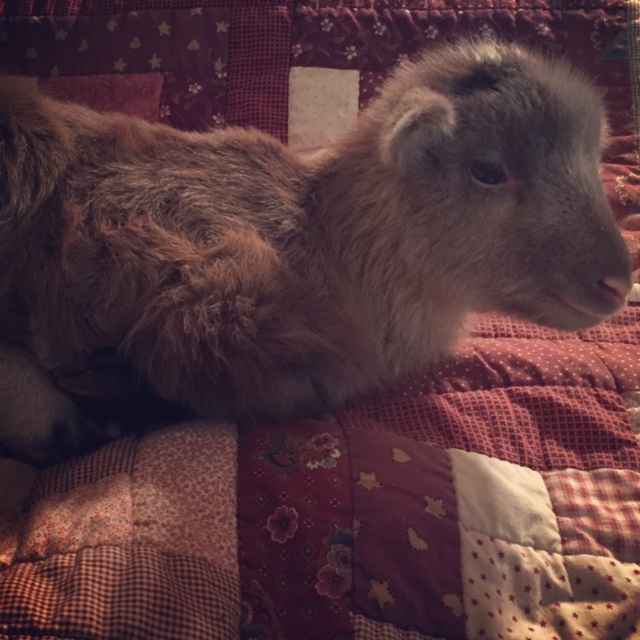 Here is the female who did not survive. 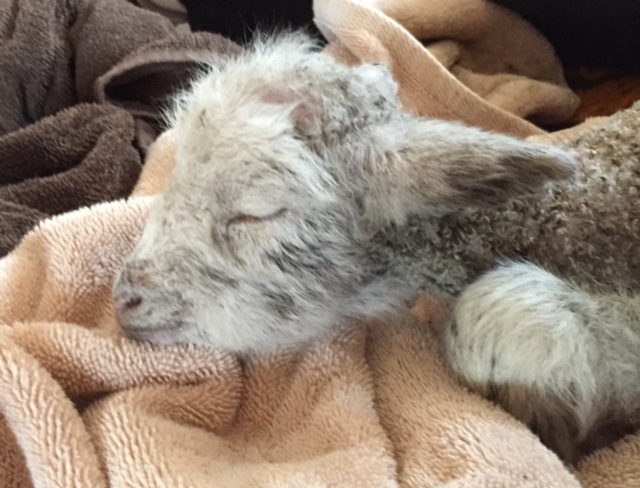 as you can see, she has more of a goat face, and wool on her body. 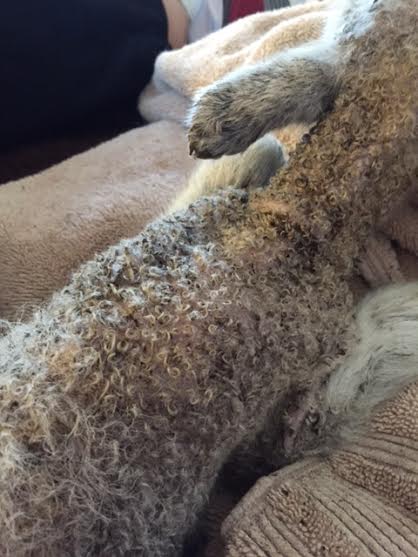 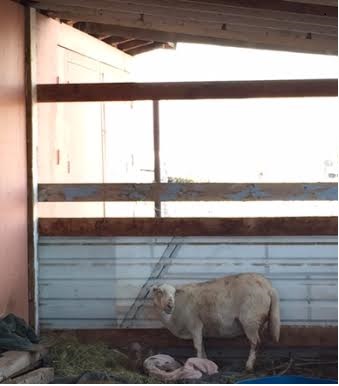 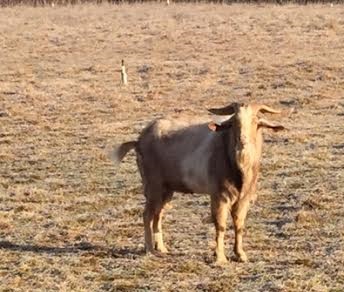 I have no idea the breed of either the dad goat or mom sheep. I have been in contact with UC Davis Vet school and trying to coordinate getting blood draws and sending to the school for genetics testing.

Also, while i do have the acreage and barn to house Sammy, I need to get some pasture mates for him. Not sure if sheep or goats would be best, or what breed of either to get. So any suggestions in that area would be greatly appreciated.

The other topic I'd be interested in feeback is food. Right now he is on lamb formula. I have read up on the copper issue w/ Sheep, so erring on the side of caution with food. He has access to grass hay right now, and an iodized salt block- he sometimes nibbles on one or the other.

There was a story of a geep born in England last year.

I put the link to the item on the forum somewhere.

You sure his momma wasn't with a ram five months prior to being penned with the goat? It sounds like you don't own them, so therefore, anything's possible. His momma is a hair sheep (looks Katahdin), which would explain the hair coat on the ram and the hairs interspersed on the ewe with the wooly coat. It will be interesting to hear the results from the genetic testing.

SheepGirl said:
You sure his momma wasn't with a ram five months prior to being penned with the goat? It sounds like you don't own them, so therefore, anything's possible. His momma is a hair sheep (looks Katahdin), which would explain the hair coat on the ram and the hairs interspersed on the ewe with the wooly coat. It will be interesting to hear the results from the genetic testing.
Click to expand...

Hey being totally honest, yeah- Who knows what was going on 5 months prior. Which is exactly why I want to get the testing done. I'm totally new to the sheep and goat world, so if it turns out we are wrong, hey it is what it is. Until then, Here is what I know.

My Sister in law is Ukrainian, her mom speaks Russian only- and I haven't known them long or very well. I know she is what would be considered an old school type farmer. She has a pretty decent set up w about 10 goats (who were in a barn, 1 baby about a week old and 2 more prego). In her pasture outside, she had the sheep and the billy goat. ( w a 3 sided roofed enclosure) I was there when she was out of country, so a lot of what she said was relayed via translation.
I got the jist that she didn't seem to realize the sheep was pregnant. and kept yelling at my sister in law about us letting her goats out (bc she thought those were the only animals prego)/ When we finally were able to explain it was her sheep that had the babies, and wanted nothing to do with them., she said she didnt' have time for a weakling or to bottle feed- and if I wanted to try and save its life- go for it.
My vet, who has nearly 30 years livestock vet experience, seemed to take one look at him and have no problem saying he was a hybrid.
I can only go on what I know at this point. I have to assume he is a hybrid. Doing every thing I can to make sure he grows healthy.
So any help on this board is greatly appreciated. Especially someone who has experience with both sheep and goats-
Thanks again everyone

From what i have read (because the thought has crossed my mind to try for a geep, admittedly), if he is indeed a geep, it would be strongly advised to band him EARLY. Not because you dont want him to breed, but because buckrams (?) Are notoriously insatiable and become a bother trying to breed ANYTHING and everything constantly.

If this is indeed a geep, which it may not be considering the curly coat is not anything you would expect from a katahdin mother or a goat, you have a beautiful little bugger to have as a pet! Chimeras interest me from a nature and evolution perspective. Id be willong to bet she was exposed to either a wool or dorper ram 5 months ago, based on that curly hair alone. Buck looks to be boer x.

Either way, welcome to the forum and congratulations on your lovely addition. Hope to hear more from you!

Any one have advice on whether I should get another sheep or goats as his pasture mates? Lets say it turns out he is just a sheep, he would be ok with couple goats yes?

I will preface this by saying I am biased toward sheep

Whether he turns out to be a geep or not, he's cute! As to what to get for companions for him, what are your goals for your sheep/goats? Do you want wool, meat or milk? Will you have them on pasture or brushy areas? How good are (or will be) your fences?

Personally, I'd get sheep

norseofcourse said:
I will preface this by saying I am biased toward sheep

Whether he turns out to be a geep or not, he's cute! As to what to get for companions for him, what are your goals for your sheep/goats? Do you want wool, meat or milk? Will you have them on pasture or brushy areas? How good are (or will be) your fences?

Thanks! I love that face of his! Since this was an unexpected addition, they would really just be pets. (I'd like to just get 1-2 more) I've searched around rescue sites, as I have some good connections in that arena. It's sad how many goats and sheep are neglected or abandoned.(which gives concern for transmitting disease) I do have good friends who can help me with the shearing, so that won't be an issue. From what I've been reading, sounds like males are ok to be around each other?
I have 5 acres, but its currently fenced for horses/cows. I have about a 4-6 weeks that I can keep him in the house. I plan on fencing about a 1/2 acre first and connect that to the small barn I have. I've been reading a lot on the fencing, so I have a good idea of how that needs to be.
I'm concerned though about the plants around here. I just bought this place last fall, and it was a repo- so the pasture was basically left to rot. Its rocky, so I can't just til it up. I am not sure what the frozen/snowed over plant life is out there. some of it may be sage brush ( I live in Northeastern Washington state) I've read a lot on what plants can kill goat or sheep. Thinking maybe I need to figure a way to dry lot and just feed grass hay til I can fix up and actual pasture next spring. Suggestions? I'm open to any and all feedback.
and thanks again every one for being so helpful!
You must log in or register to reply here.
Share:
Reddit Pinterest Tumblr WhatsApp Email Link