Bruce said:
And just where does Dad plan to sleep? I think the boys room is well packed already and I doubt you need another body in your bedroom.
Click to expand...

Bruce said:
And just where does Dad plan to sleep? I think the boys room is well packed already and I doubt you need another body in your bedroom.
Click to expand...

He has to sleep in Spouse's TV room/ office.

Either on the ground, or camping cot.

The horror means that we have extra cleaning.

Alaskan said:
The horror means that we have extra cleaning.
Click to expand...

I know the feeling! When my step sister and her DH came for an overnight 2 years ago we cleaned. But I warned her ahead of time to imagine a house full of clutter and to expect it to be worse than that.

Arrow pointing to my garden fence. 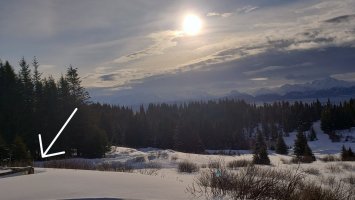 Two more from this morning

From the south door. 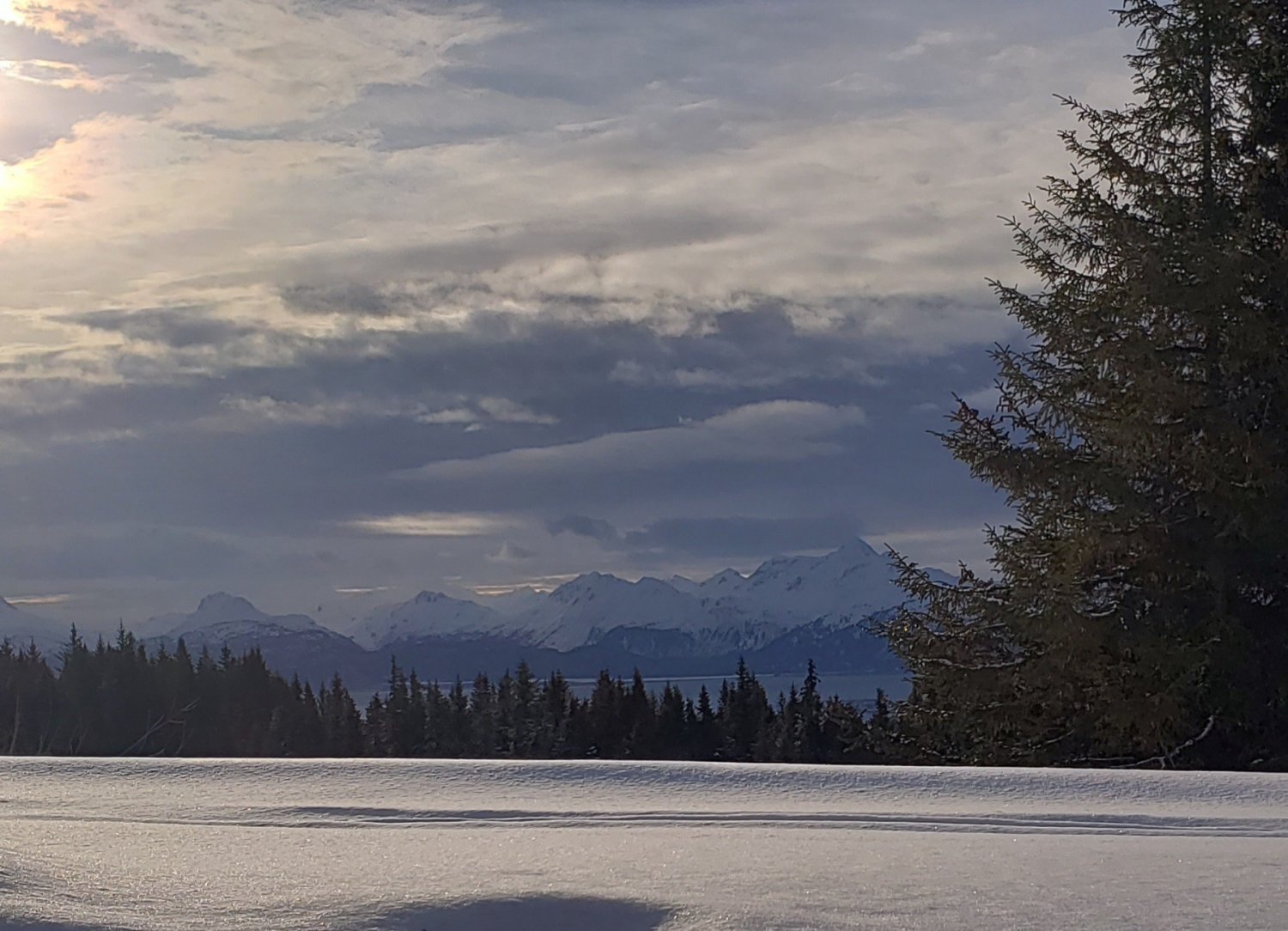 It is beautiful there. I am getting too old to want to deal with such deep snow. When I first moved to Va (early 1980's) we had 2 snowstorms back to back in 3 days, over 30 + inches....secondary (back) roads were closed for several days. I road the horse from the house out to the big pole barn out back to do chores because I could barely walk the first 2 days. Luckily she loved the snow and would come to call and I had ridden her from a young age with just a halter.... and I was ALOT more supple and thinner back then.
Then we had another winter of snow and it snowed every weekend from the weekend before Christmas for the next 10 weeks.... never saw bare ground until mid March.... and we would take the 2 wd tractor with a roll of hay, down the road with me in the bale bed 4wd truck with 2 rolls of hay on it so that we could feed 3 rolls out to the cows.... you couldn't get down the roads with a truck..... It was a job but we still had fun in some ways. Not surre I am up to it anymore. Maybe if the knees get fixed and I don't hurt.....

I do prefer the snow to the cold rain we get many times; snow is easier on the cows.

farmerjan said:
I do prefer the snow to the cold rain we get many times; snow is easier on the cows.
Click to expand...

That is very true! I only worried about the horses in nasty wet sleating mess. They were great in cold.

Up here we have never had much, just a few horses, then a few goats.... so in summer they were in pasture, but in winter they would be in the little barn paddock. So, as long as you could crawl your way to the barn, you just had to toss the hay down from the loft.

With the horses once a week I would toss out hose (I think it was 3 hoses, connected, each a hundred feet long) from the second story window. Kid would grab it, coil it up... then start to trudge to the barn... get it into the trough and holler.

I would turn the tap it was screwed into on hot....

Goats don't drink as much... couldn’t use the huge horse trough.... so kids just hauled those big 6 gallon water jugs.

Our 4-wheelers can't make it from the house to the barn .... too much snow.

Snow is getting all soft and threatening to turn the world into a solid ice sheet.

. Love these pictures thanks for posting them, made my evening.

I was almost an Alaskan, notice I said "I" because my wife wasn't having nothing to do with that.
Click to expand...

So here are some more moose photos (from years past, not today) 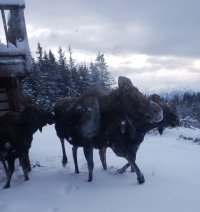 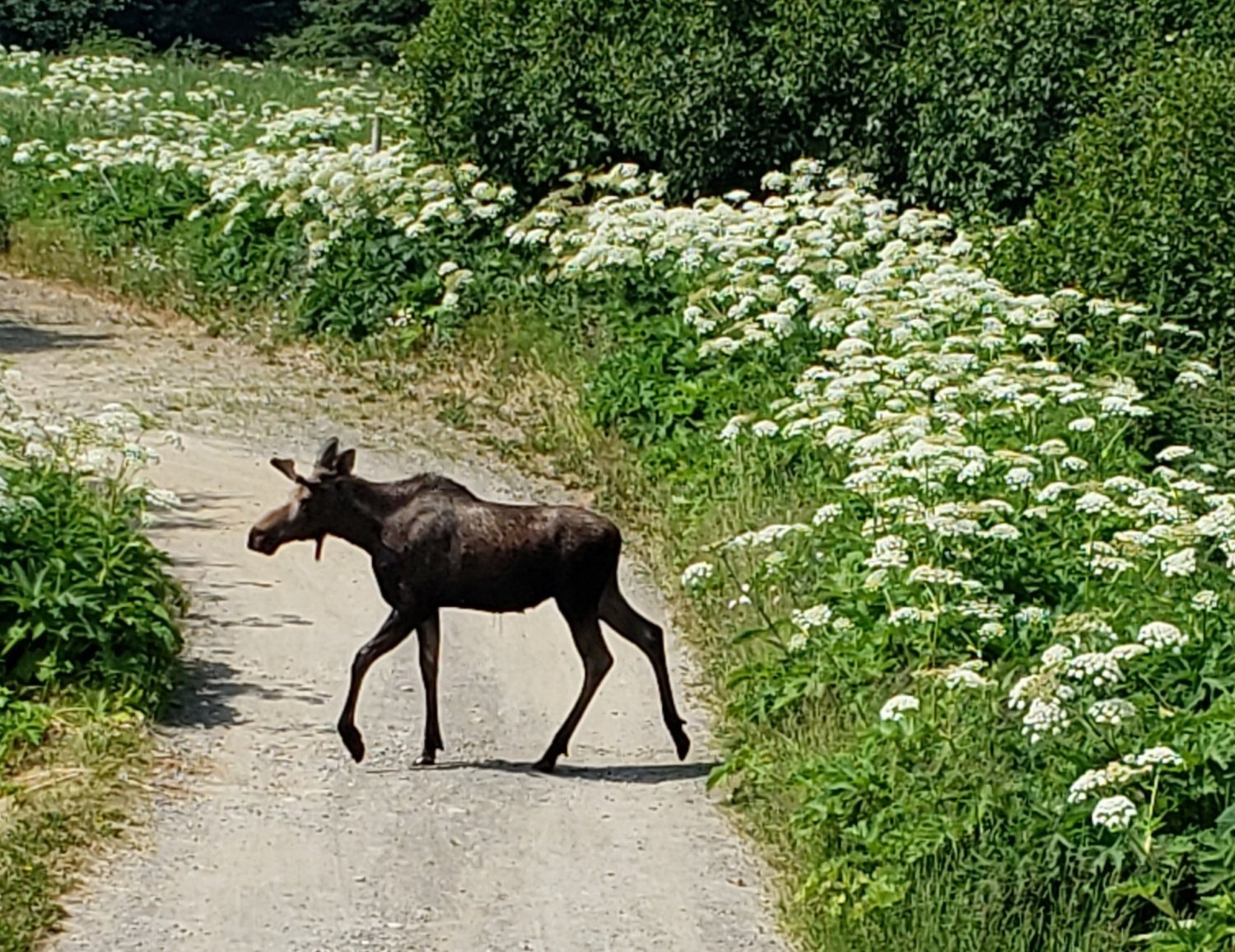 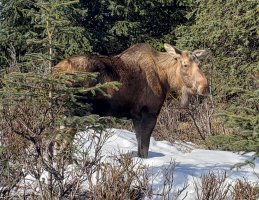 Alaskan said:
Two more from this morning
Click to expand...