First cup of coffee. Haven’t found coffee mugs, but a plastic go cup will do. Had to unpack 4 boxes to find it. Woke up every 2 hours, got up at 4.

Remember when we come back that we will have the truck so can help bring any leftover stuff. As you unpack, you can take empty boxes back and refill them!

First Sunrise on the front porch on a foggy morning. 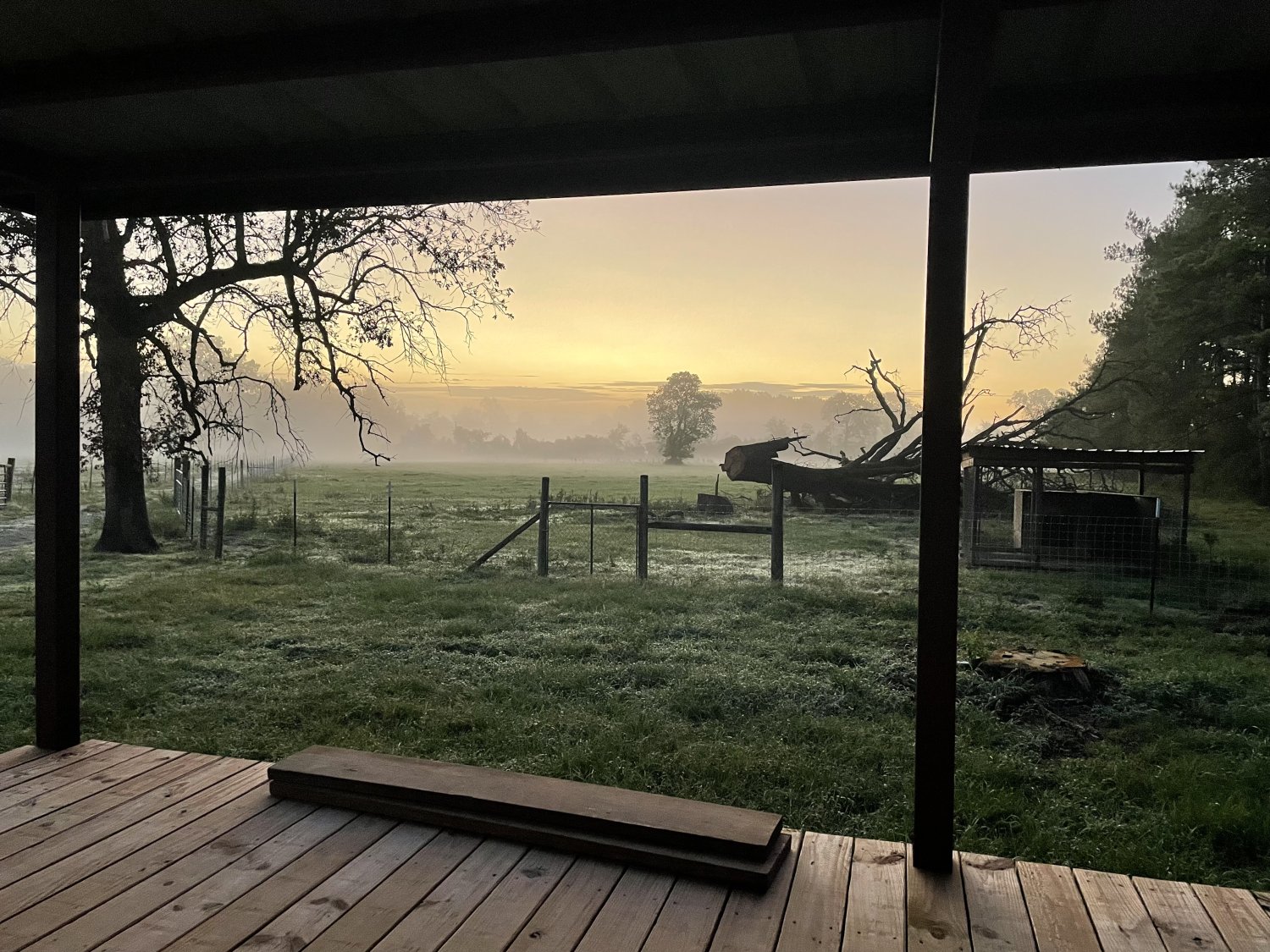 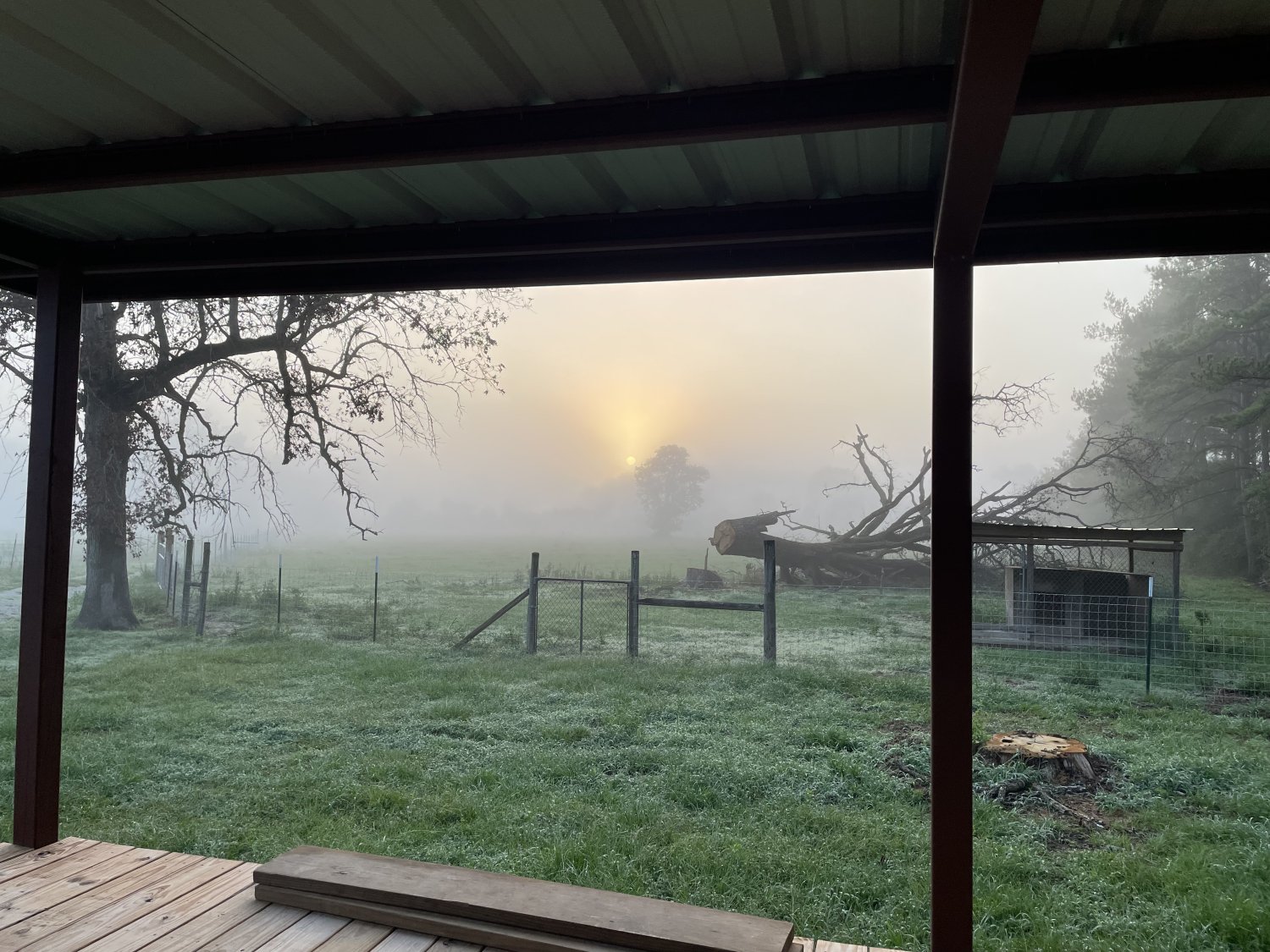 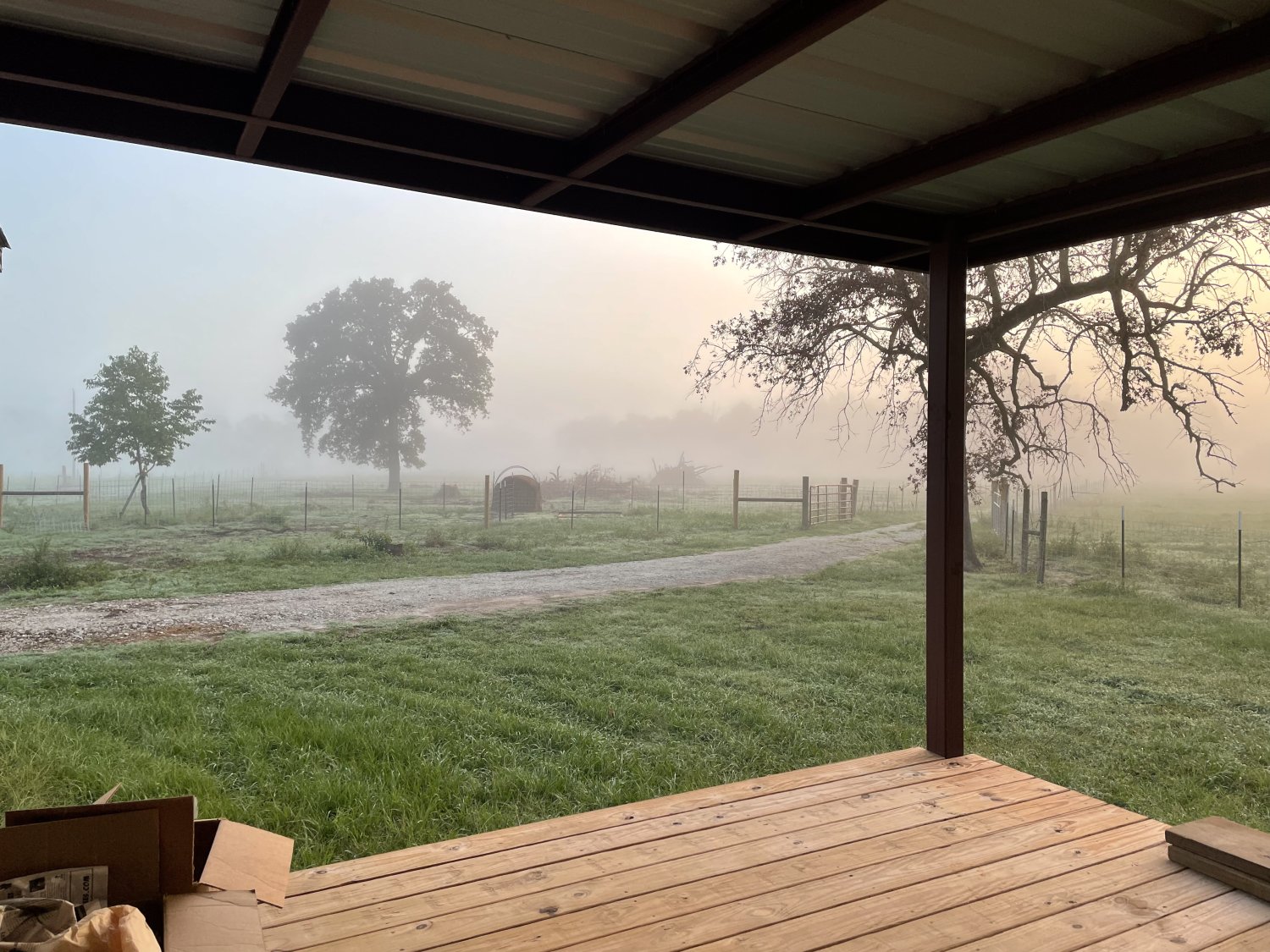 Son and I moved sheep. First we loaded the young ewes. That was fun! Not! Son backed up trailer to their pen. We opened trailer gate, opened their gate and filled the gap with half a hog panel. They scattered like quail. We wound up trapping them in the cow panel square where the round bale goes. Then son picked them up, one by one and carried them to the trailer. I opened the middle gate and he set them down and gave them a little push.

I wanted to put Ringo with that big beautiful brown ewe, Number One, so we loaded them in the back half of the trailer.

How to load Ringo……. Put pan of feed in trailer, shake can, pour feed in pan. Now Ringo’s mind is off romancing Number One, it is riveted on the feed pan. Ringo hopped right up in the trailer. We used half hog panels to squeeze Number One until she had nowhere else to go but in the trailer. I lifted one foot, hmmm….. what’s Ringo eating? And she got in the trailer.

We loaded 2 of those Quonset type huts on son’s trailer, I put Carson in the back seat of my truck and off we went.

We put huts in the ewes pen first, then unloaded Ringo and Number One in their pen. Backed up to ewes pen and unloaded the young girls.

We were dripping sweat, needed a cold drink or 2 or 3 and to sit down inside and cool off.

I hated to, but closed Carson up in a small chain link kennel. Then we went back for the big ewes.

Son backed up trailer, I opened the gate between the pens and they ran through. A couple jumped in the trailer, looked around and jumped back out. I got the secret weapon——FEED!!!! I went in the side gate with a pan, poured feed, called SHEEP! SHEEP! SHEEP! And rattled the can. I backed out the side gate and all but 2 ewes ran in to gobble up the feed. I shut the middle gate. We squeezed those two until they hopped in with me pushing just a little. I opened the middle gate and slid out a tiny crack in the back gate.


Son turned truck around, headed out and backed his truck and trailer up to load the other Quonset style hut. I snapped leashes on Sentry and Sheba, two VERY WORRIED DOGS! They had watched all the proceedings and were upset, concerned and probably thinking they were going to be left behind. I opened the back door to my truck and Sentry jumped in. Sheba thought about it, I coaxed her and she jumped in too. Off to the farm!

When we got there, son tol

When we got there, son told me he would unload the ewes and I could take Sentry and Sheba walking to show them their new home. 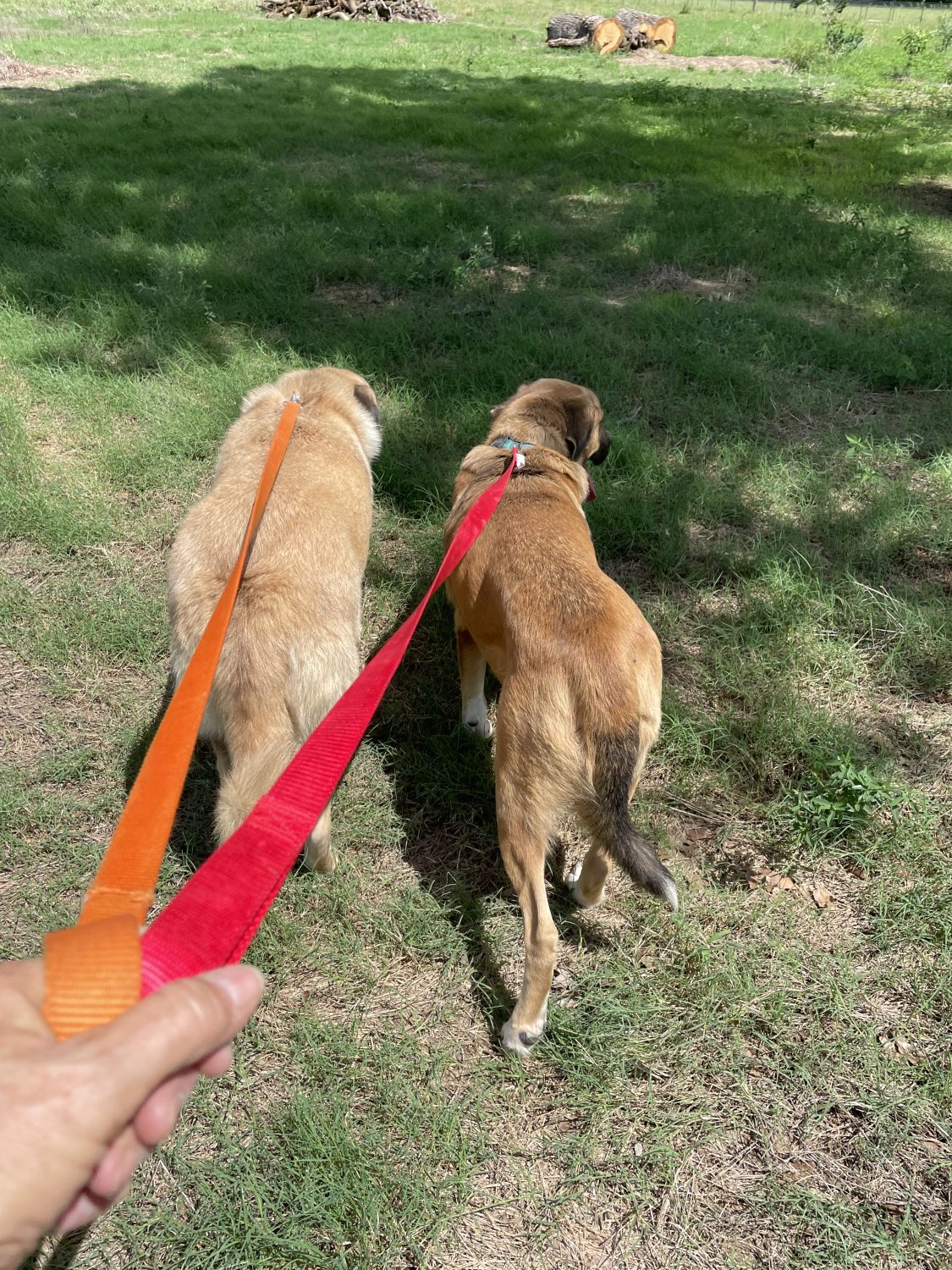 We walked the fence line, they found the pond. I think they will enjoy the pond, but right now it’s new to them. 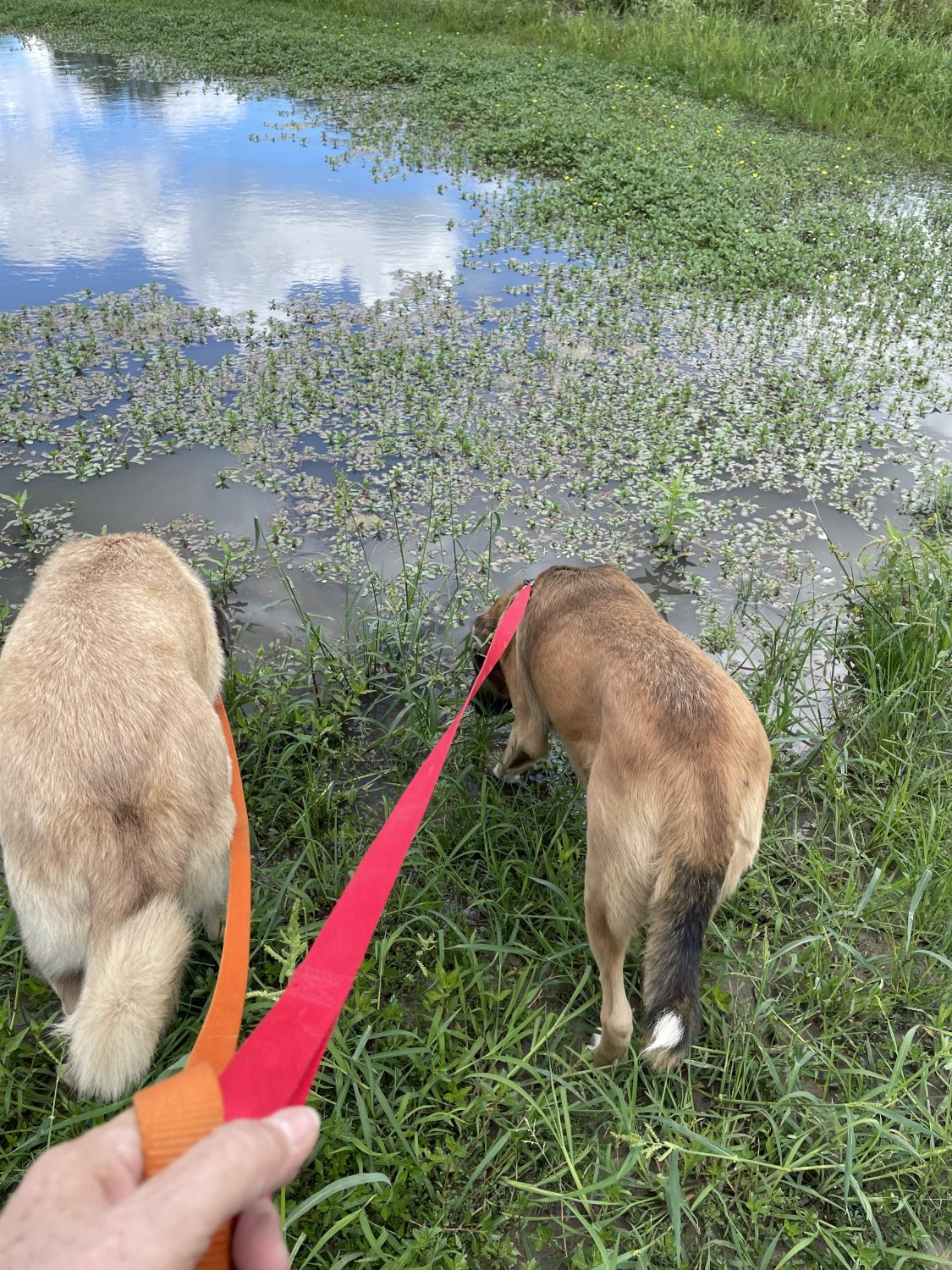 We went all the way around the pasture. They were excited, sniffing, stopping to pee, wagging tails. Then back to the sheep. I kept telling them, we are HOME! They know what HOME means. That’s what I tell them when I put them in the night pen with the sheep.

Since I couldn’t post, I went back outside and we went walking again. Another trip around the pasture, they were happy. I put them in the pen and stayed with them awhile.

I’ve walked around with Carson, I fed him in the house and let him stay in for a good while. I don’t have a yard up for him yet and there’s too many big dog holes under gates and various places. I put him in the kennel for the night.

You're there. Animals are there. Your farm happened.

. Coffee on the porch. Relax. Enjoy. Be proud.
F

Pretty picture with the fog and early morning sun. It has really greened up from that little bit of rain you got. The dogs will all relax a bit once they see you settling in. And since they were so worried...you took their sheep away.... and then got their sheep back, they ought to settle in.
So glad that you are at "mostly there... with the all important animals there... the rest will come as you are ready for it.
Will your DS be there for a bit? Through the surgery now? He can work at moving the bigger stuff... or getting the chicken coops down, or cutting up that big tree.... Or maybe planting some new trees nearer so that they will make some shade in a few years????

Baymule said:
First Sunrise on the front porch on a foggy morning.