Soooo. An update on Rose...... The vet came out to do her well check and get her rabies shot. Rose did very well. The vet confirmed the thrush which we have all but two hooves cleared of. She also thanked me for giving her proper hygiene on her hooves and grooming schedule. The vet says she has great body condition but she does want to see her gain about 150#. Come to find out, our 12 year old mare is actually 18. So I feel a little jipped in that regard. But we still love her nonetheless. She is doing better after just two in her series of corrective trims. We still have some work to do...... Overall, she is a great addition, we love her, she loves us and we still couldn't be happier.

I am glad that Rose is improving under your care. She certainly sounds like a sweetheart. Do your homework and find her a suitable friend, to give you another horse to ride.

Oh yes. We will be going into the next purchase quite a bit more carefully. And it will be MY vet doing the presale check. Just not sure what kind of personality to look for as a mate for her. A gelding? Another mare? What's your experiences?

In herd dynamics there is a lead mare. The lead mare bosses the whole herd. If you got a dominant mare, she could beat up on Rose, who sounds pretty laid back. A gelding might be a better choice.

I hope Rose has been doing well since you got her- she's a good looking mare! Still any talk of finding her a pasture mate?

HomesteaderWife said:
I hope Rose has been doing well since you got her- she's a good looking mare! Still any talk of finding her a pasture mate?

I quite forgot to update this thread. For that I do apologize.

Rose, as it turns out, IS the lead mare. We now have five horses. Nature Boy was the first addition after Rose and the two became fast friends. It was late when we finally arrived home with him, so into the stall he went. Rose spent the whole night on the other side of the stall door with their heads touching. It was by far the sweetest thing I had seen. NB is a quarter horse gelding. He is huge with a nice straight topline and high withers. He is the biggest goof and a selfie addict. Nature Boy will stand in place for as long as you will love on him and groom him. At the start he was a bit shy but he warmed up to us and now craves the attention. He is truly an in your pocket horse.

A week later we got Tilley. Rose took to bossing her around and to this day Tilley still is the bottom mare on the totem pole. For a while it was just the three of them. Tilley claimed our four year old and he claimed her. She is a mutt of a horse. We believe she is predominantly Missouri Fox Trotter with TWH and Saddlebred bloodlines. Beautiful as can be and sweeter than honey. She hates a bit but does very well with a bitless setup. She is learning to neck rein as she was trained to hard rein. 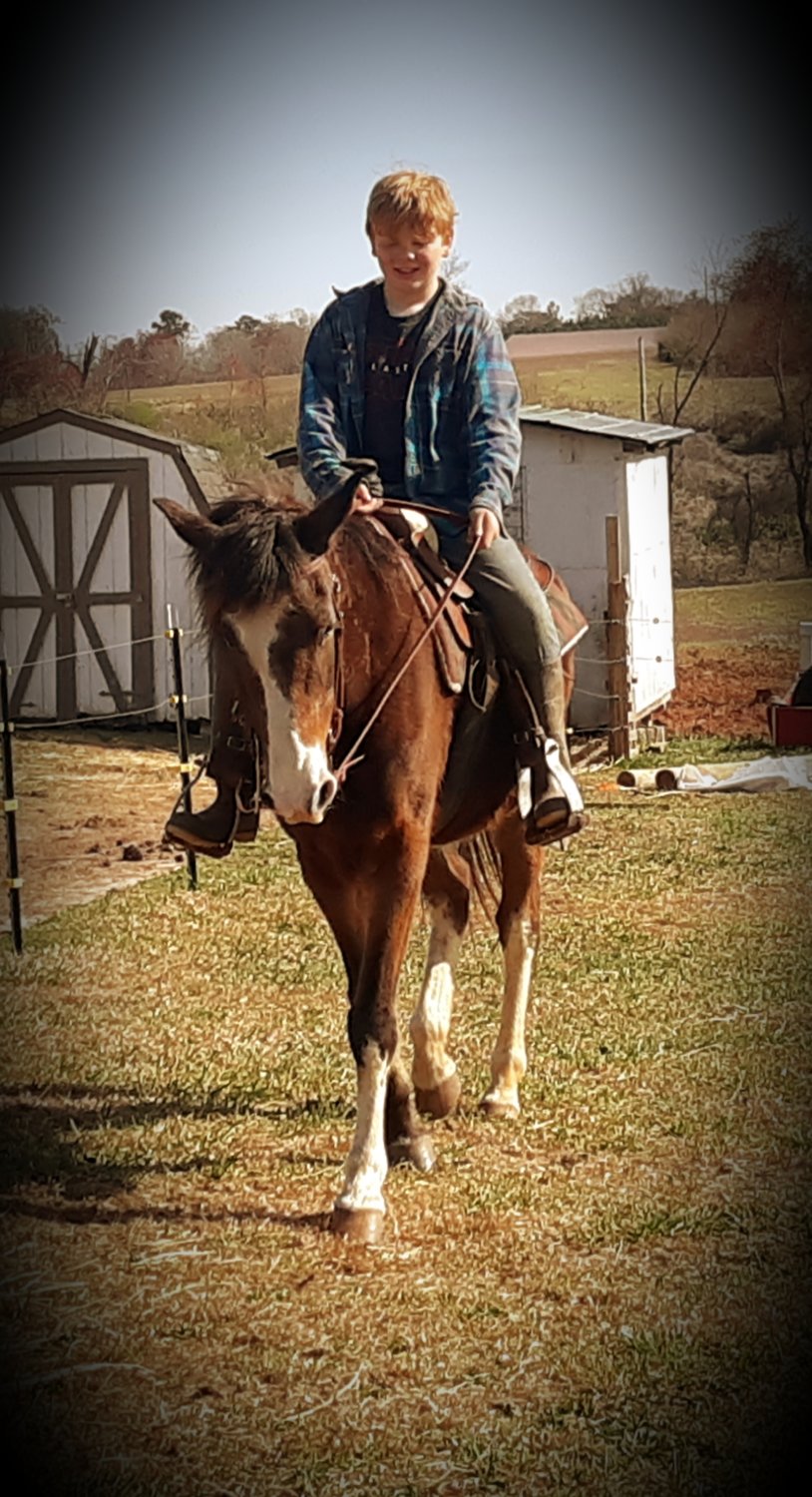 About a month and a half ago, we went and picked up Allie and Sully. They are both Tennessee Walking horses. (So I've been told).

Allie and Rose have become fast friends. She is not mean or bossy towards Tilley. She is the youngest of our herd and loves to trot about next to our oldest son. She came with old shoes on her front hooves but we have since removed and trimmed her up really nice. She has filled out almost completely and has fast become one of the family. 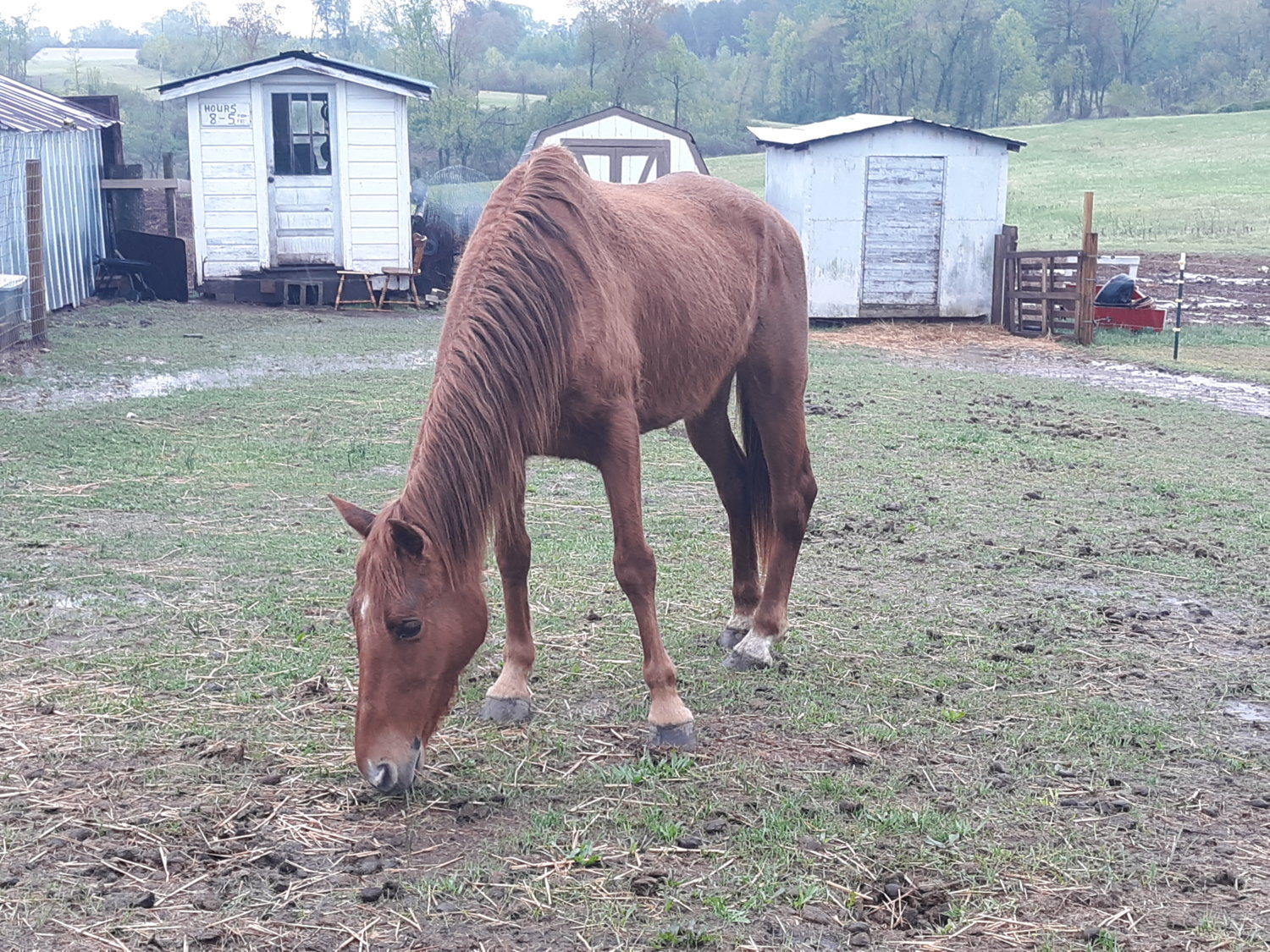 Sully. Poor ol Sully. He has a will to survive. His rescue story is the saddest of our four new rescue horses. When he went into QT (quarantine), he was so emaciated that you could fit your fingers between his ribs. As you see below, he has come such a long way. He still has a long way to go, but he is definitely on the mend. He was very wary of the other horses and of us. But with Nature Boys gentle friendship and our loving care, he has blossomed into a confident and sweet natured boy (gelding). He sees me coming out to the pasture and walks right up to me for love. 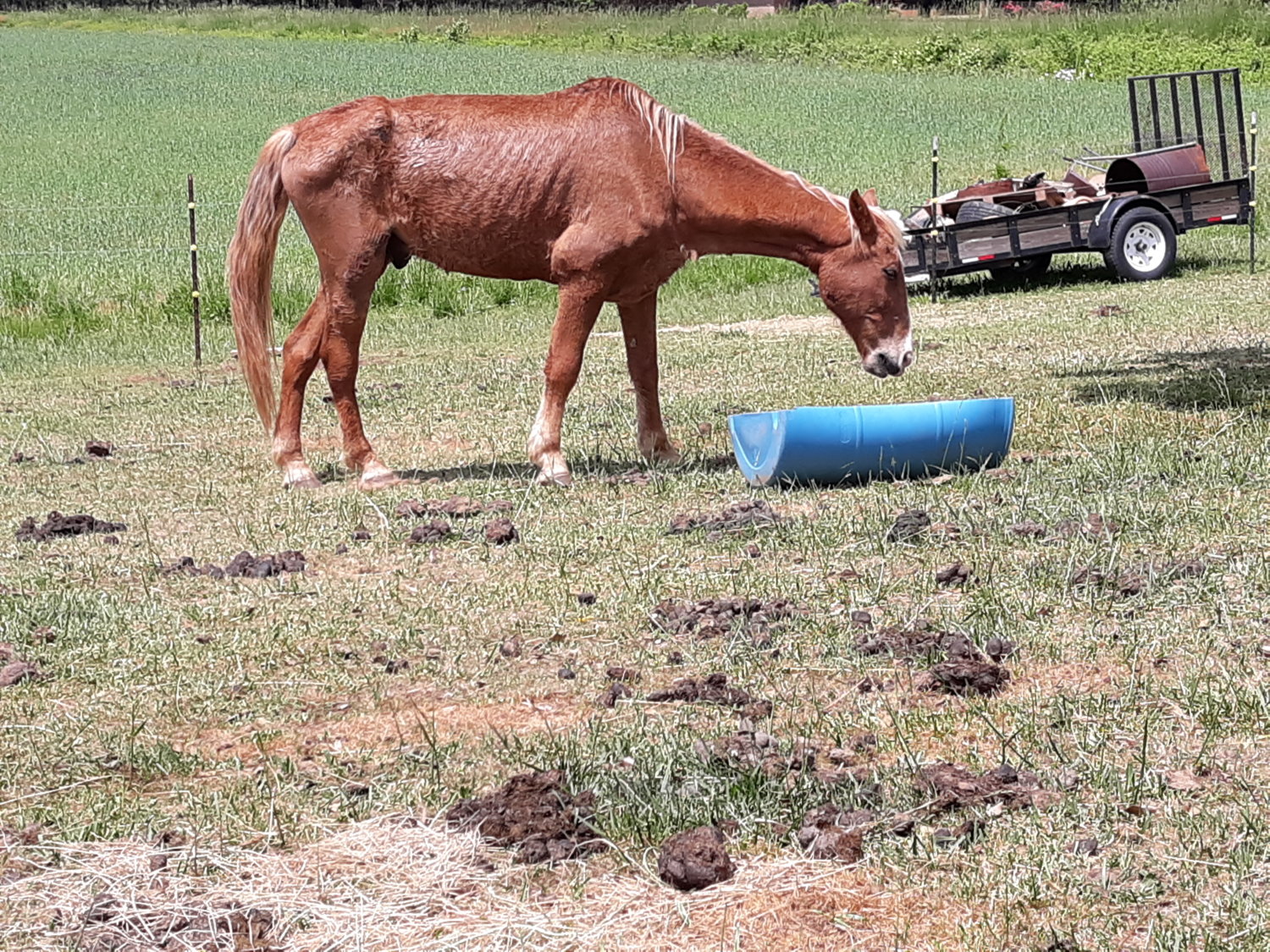 I apologize for the repetitive pictures. My phone was being wonky on the uploads. 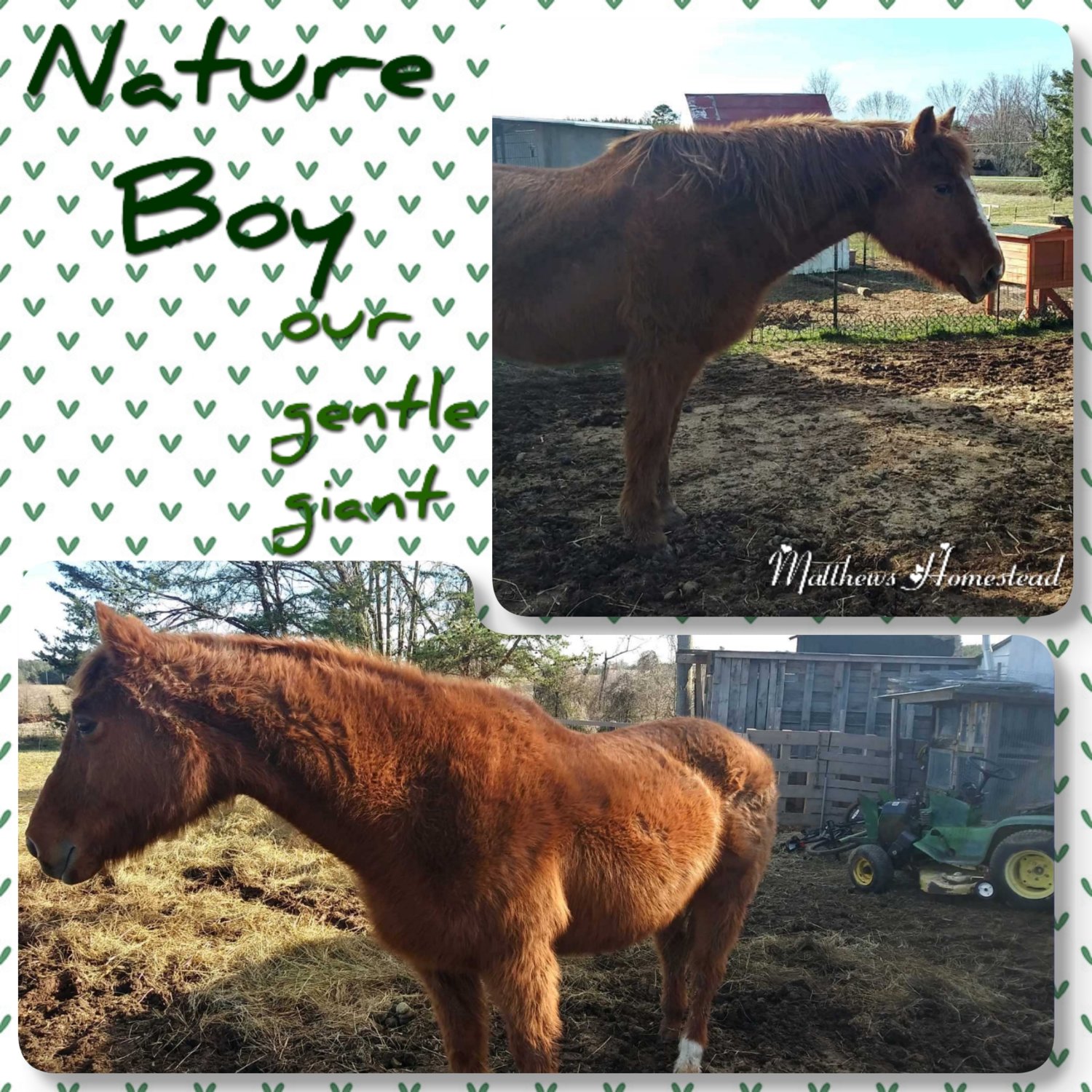 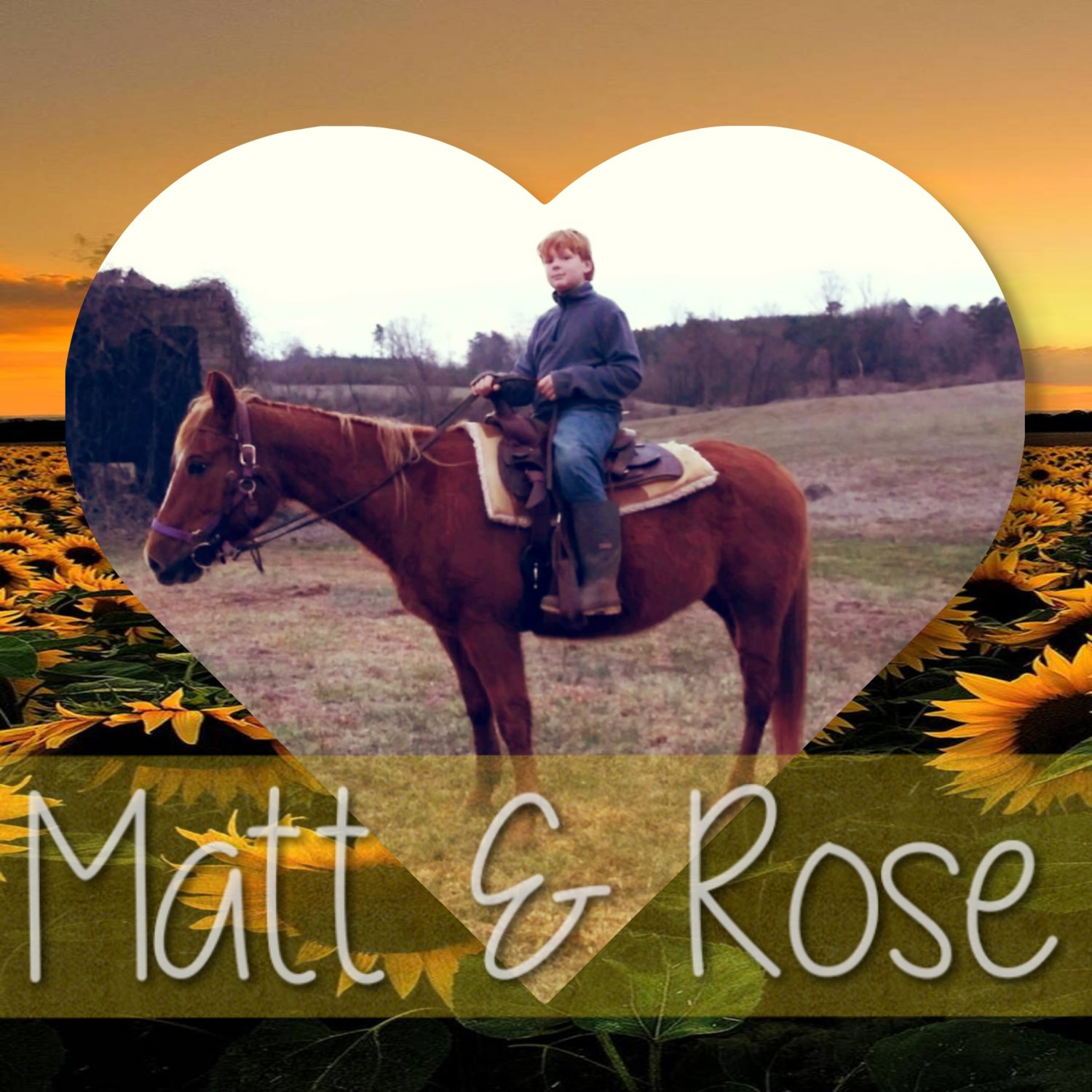 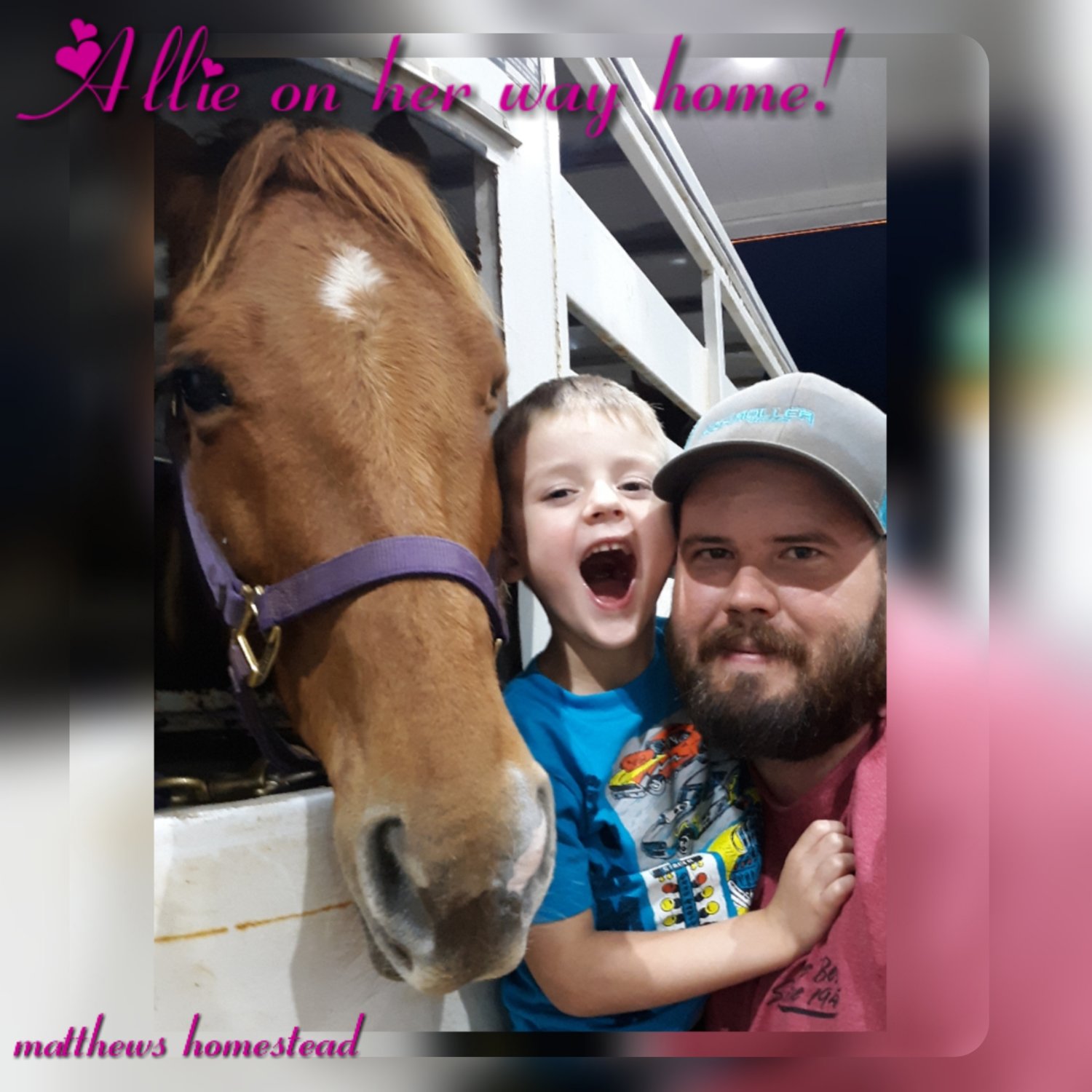 It takes awhile to put weight back on such a skinny horse. A lot will come on pretty fast, then will slow down, it may take a year to get Sully slick and shiny.

Baymule said:
It takes awhile to put weight back on such a skinny horse. A lot will come on pretty fast, then will slow down, it may take a year to get Sully slick and shiny.
Click to expand...

He has all the time he needs. He is going to be beautiful. He already is, but just so much more once he is healthy. We are loving him and his sweet gentle nature.
You must log in or register to reply here.
Share:
Reddit Pinterest Tumblr WhatsApp Email Link