My neighbour just stopped by for eggs and said that he was looking for an exceptional coyote killer dog...he just saw 6 of them this morning and our dogs have been going nuts! My two Pyrs are locked in the sheep pen, so the sheep are safe but I am nervous about my rabbits and 3 goat kids in the pen a few hundred feet away.

Anyways he has 5 dogs including a GP but they can't seem to catch and kill those pests and he has 350 goat herd in kidding season. I can see why he wants the coyotoes taken care of. He was looking for a Russian Wolfhound but nothing remotely in our area and it seems most are mostly show not working lines.

Any suggestions, need something with some speed as I think the regular dogs (Pyr, Shepherd, cattle dogs are getting out run)?

woodsie said:
My neighbour just stopped by for eggs and said that he was looking for an exceptional coyote killer dog...he just saw 6 of them this morning and our dogs have been going nuts! My two Pyrs are locked in the sheep pen, so the sheep are safe but I am nervous about my rabbits and 3 goat kids in the pen a few hundred feet away.

Anyways he has 5 dogs including a GP but they can't seem to catch and kill those pests and he has 350 goat herd in kidding season. I can see why he wants the coyotoes taken care of. He was looking for a Russian Wolfhound but nothing remotely in our area and it seems most are mostly show not working lines.

Any suggestions, need something with some speed as I think the regular dogs (Pyr, Shepherd, cattle dogs are getting out run)?
Click to expand...

I'd go with Australian Cattle Dog 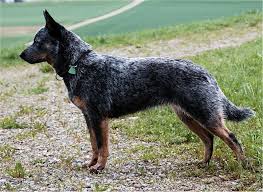 (Not my pic)
They are very fiesty, willing to kill anything (Though ours leave the chickens, pigeons, geese, ducks, and goats alone. But not the pig or ferrets. They HATE them. XD They wouldn't KILL them but the girl hates the 2 of them, since they aren't scared of her.. lol) ours will go after moose, they are very fast, and extremely intellegient and loyal dogs. Personally for coyotes I'd trust ours. We have a male whose strong (though not very agile), and could go after a small wolf - large coyote, and our female is very growly-I'm-the-boss-likeness and would def. be able to kill a coyote, and let alone catch it.

ETA ;;
They also are good herding dogs, and usually weigh (girls) 30lbs, and males anywhere from 30lbs - 60 lbs. (60lbs if fat, ours is fat but he's stocky and sturdy). So they're somewhat small but good dogs and almost all you can find is working dogs.

Lost in the flock

Our saint Bernard's have gotten within a couple of feet of catching the coyotes.
Our guys don't work by killing though. They are mainly chasers...not to say they wouldn't if they did catch them.


What about the Irish wolfhounds?....I know theyre on my wish list at leas

I don't personally have one but I hear the Turkish Kangals protect their livestock by actually hunting down and eliminating the threat.

A German Shepherd Dog is excellent at speed and small prey such as a coyote but then what... 5 dogs already... what dogs other than the GP does he have?
B

One thing to remember is that any large dog can kill a single coyote if they can catch them. However when that one coyote gets to do a running fight with a dog ( slow down or stops with short snaps then runs again ) and when they reach the pack ... dead dog as they are torn to peices from all sides. Some examples: One neigbor 3 down from ours ( raises mini horses ) has 7 Australian cattle dogs and he looses one now and then to coyote packs whenever one of them starts to chase after one. Never to be seen again. I lost 2 90 & 95 lbs.Boxers this way. My accross the street neighbor lost his 100+ lb male Rottie 3 years ago to a pack. All that he found was his head and hide. Another neihbor next to the accross the street one had an attack trained male Dobbie to a pack. Another neigbor a mile away had a Rhodiesian Ridgeback killed by a pack. etc. .

If all those dogs he has aren't killing coyotes I think his best bet is to use a gun liberally or hire a pest extermination service/someone who likes hunting coyotes with their own dogs. A lot of the dogs I've seen bred to take on coyotes would not be safe with groups of other dogs unless the owner has a lot of dog skills and would be a lot of trouble to house when not hunting.

If they're really serious about taking on these coyotes on their own something like a bully lurcher (a pit bull/greyhound cross usually) has the speed to take them down and the strength to keep them down. The ones I've seen usually work alongside larger bullies like dogos to help kill the yote when they catch up before any dog gets too hurt. It's a dangerous hunt for single dogs and I've seen a lot of dogs seriously wounded or killed by coyotes.

I'm with Bossroo... it's not a single coyote you have to worry about, it's the pack... they didn't call Wiley C. Coyote for nothin'.

A single coyote is often sent by the pack as a decoy to lure dogs to chase them to where the pack is waiting... In our area we get a lot of coy-dogs - unspayed females being lured into the pack and bred producing these nasty half-breeds. Males neutered or unneutered don't fare so well

Our Newfoundland almost got lured into this trap one night when a pack of coyotes came running through our property close to the barns... the single coyote came out of the bush and climbed up to stand on the manure pile, our Newf set up chase, and we could see the pack waiting among the trees... I've never been so happy that a dog knew recall so well!

A neighbours dog wasn't so lucky... didn't find much of him left

We have many coyote hunters in these parts... they put ads up on Kijiji frequently asking farmers for their dead stock to be used as bait.

Well thanks for the suggestions...my husband agreed with the gun idea. I think he wanted a dog fast enough to get catch one until the other 5 could get there. I don't think he ever intended to send them in alone. I'll have to ask him why he doesn't just shoot but it might be because we are in city limits and it is difficult to see them as they are coming up from the river in brush and bushes in the dark. They are doing the "Im hurt lure too" but no one has fallen for the trap. I think he is animal addict too on a LARGE scale, he just has figured a way to make a decent living at it...weed control herds....he may just want an excuse to get another dog. (They are living in a travel trailer and not a big one, and when we left after having a tea 3 of his big dogs jumped into the trailer!

He has one AMAZINGLY understanding wife!).

He has an amazing young female Pyr but she pretty much is glued to the goats, I'm sure the only reason he hasn't lost some already.

I am pretty sure my Samson GP could catch them as he has a super long and lean gait and he's super fast....and my female would be close behind. Not sure if I really want to volunteer them as I would feel awful if they did get hurt taking on a pack, we know there is at least 6. I guess they would work with his other dogs too so that would bring the total to 7 dogs. (His dogs are German Shep, a REALLLY old GP, young GP, Blue heeler, and another heeler cross). Still feel uneasy about the sending my dogs in although I am sure they would be thrilled to get the chance to get the yotes that are taunting them everynight.

I'll suggest the gun idea and see what he says. I think it may be he is actually living on City land doing weed control and may not want to do anything to jeopardize his arrangement.

woodsie- with the history of your escape artists I would not recommend this. Your dogs should remain with your animals. I am always in favor of helping out another but... this IMO could cause more issues with your own dogs.
You must log in or register to reply here.
Share:
Reddit Pinterest Tumblr WhatsApp Email Share Link