bethh Life on the Funny Farm

As most things I do, this journal will be similar. Oftentimes, I do things a$$ backwards. We’ve been farming for about 2 years and I’ve been on this site as long but now I‘m just getting around to making a journal. I’ll try and keep it up to date.

We bought our little piece of paradise in 2017. About 3 weeks later, our kids and grandkids gave me the absolutely cutest silkie chicks that you’ve ever seen- 4 adorable bundles of white ‘fluff’. 6 months later, I’d find out these cutie pies were all roosters. In the meantime, we had added 4 buff Orpington pullets and 2 barred rocks, Lucy and Ethel. Lucy of course ended up being a rooster, but the name stuck. We lost a BO to a hawk.

This upsetting incident brought our next step. Our first LGD, Gracie. She is my sweetheart, but did she ever come with challenges. She was 6 months when we got her. She had been with chickens and goats her entire life, all that I had learned was important. Never thought to wonder how important would it be to know if she had any human interaction. Whenever a problem occurs with Gracie, I remind my DH that he brought the leash. LOL. Our issues resolved with the hawks with Gracie in charge. She quickly acclimated to life with PEOPLE and animals.

You can‘t have chickens and an LGD and not start thinking of what else we need to add to the farm. I began dreaming over Nigerian Dwarf goats. I read and looked and dreamed. I found a crazy goat lady near by and let her know we wanted a couple of does when her spring babies were born. We ended up with the cutest pair of does who started out living in a dog crate in our kitchen.

The more I learned about LGDs the more I realized Gracie needed support. I began looking for a second lgd. I found a farm not too far away and we bought Chewy. He was a bundle of fur and problems. Very early on, I found out he had a congenital heart defect. It was very severe. He would have to be on heart meds his entire life. When we found out the severity of the defect, we didn’t realize his life would be so short. We had to put him down at only 10months due to congestive heart failure. He was a very sweet boy. We were all devastated. I decided that I needed to wait awhile before looking for another LGD.

Gracie disagreed. It broke my heart when I would look at her and see that she was depressed. We talked about it and decided it was time to search again. I was very scared about getting another dog with issues. I found someone who had puppies and talked to her in length. We drove about 3 hours. I sat on the ground in the pen and held this little guy trying to see if I could tell if his heartbeat seemed normal. Of course, I couldn‘t. We drove directly to the vet had his heart checked. All seemed normal, I allowed myself to then to breath. Gracie accepted this new little guy without any issues. We named him Fitz. From the beginning with Fitz, I began to realize that Chewy struggled from almost the beginning. It wasn‘t evident until I had another GP to compare him to. Fitz settled right into the routine here on the Funny Farm.

My initial plan when getting the goats was to add a couple of boys so that we could breed the girls. I started searching for a couple of bucks. I fell in love with a little black and white blue eyed buck. I spoke with the owner and we made plans to drive to Tennessee to get a couple of bucks. The one I had picked out from pictures and the other once we got there. It’s a couple hour drive to Tennessee from our home and I spent that time looking at ads of other goats. Jokingly, I asked my DH if he wanted an already bred girl also. He’s like why not. We got to the farm and I asked if she happened to have any pregnant does that she was selling. We found a cute white buck who was ‘polled‘ who reminded dh of a silly video he’d seen. We had our boys. Now off to the girl pen. I spied a chocolate doe that was precious. We picked her also. We packed 3 goats into a dog crate in the back of the Infiniti and headed home. I again was looking at ads and found someone with a rooster. Minor detour, now we have 3 goats and a rooster. The cage the rooster was in wasn’t secure and he escaped. Instant rooster name, Houdini. We weighed our options and decided to pray they he’d stay settled in the back and not cause a ruckus.

We finally arrived home. Drove to the back to unload all our animals. DH got everyone out and decided to let our girls meet their newest companions. Well, for Dixie and Cash, it was love at first sight or should I say lust. They immediately hooked up. I was stunned. Our girls had never appeared to be in heat before. They didn’t realize I had a plan. Then it was time to get the goats in their respective areas. It was like a three ring circus. Time passed and I realized that our ‘polled’ buck wasn‘t actually polled. His brother was the polled one. Our ‘bred’ doe wasn‘t pregnant after all. It took forever to get our registration paperwork.

From our initial chickens, I always wanted silkies. I found a breeder in Alabama who would sell me a trio. We happened to have a conference in Alabama so we made our plans to take a detour on the way home. We planned to buy a trio and a dozen hatching eggs. Surprisingly, we kept to the plan. Those babies hatched and we have 9 silkie teenagers. We will keep some and then I hope to be able to sell some once they are older and sexable. Time will tell. One of our silkie hens went broody and I gave her some eggs. Everybody hatched. Right now she has 4 silkie babies. I’m going to keep 2 of them for the time being and someone is buying the other two tomorrow. Well, that is just the short version of the last couple of years.

Now I have a place to talk about everyday life here on the Funny Farm. I’ll post some pics so you can meet everyone. Well, probably not everyone but enough that you get the idea. 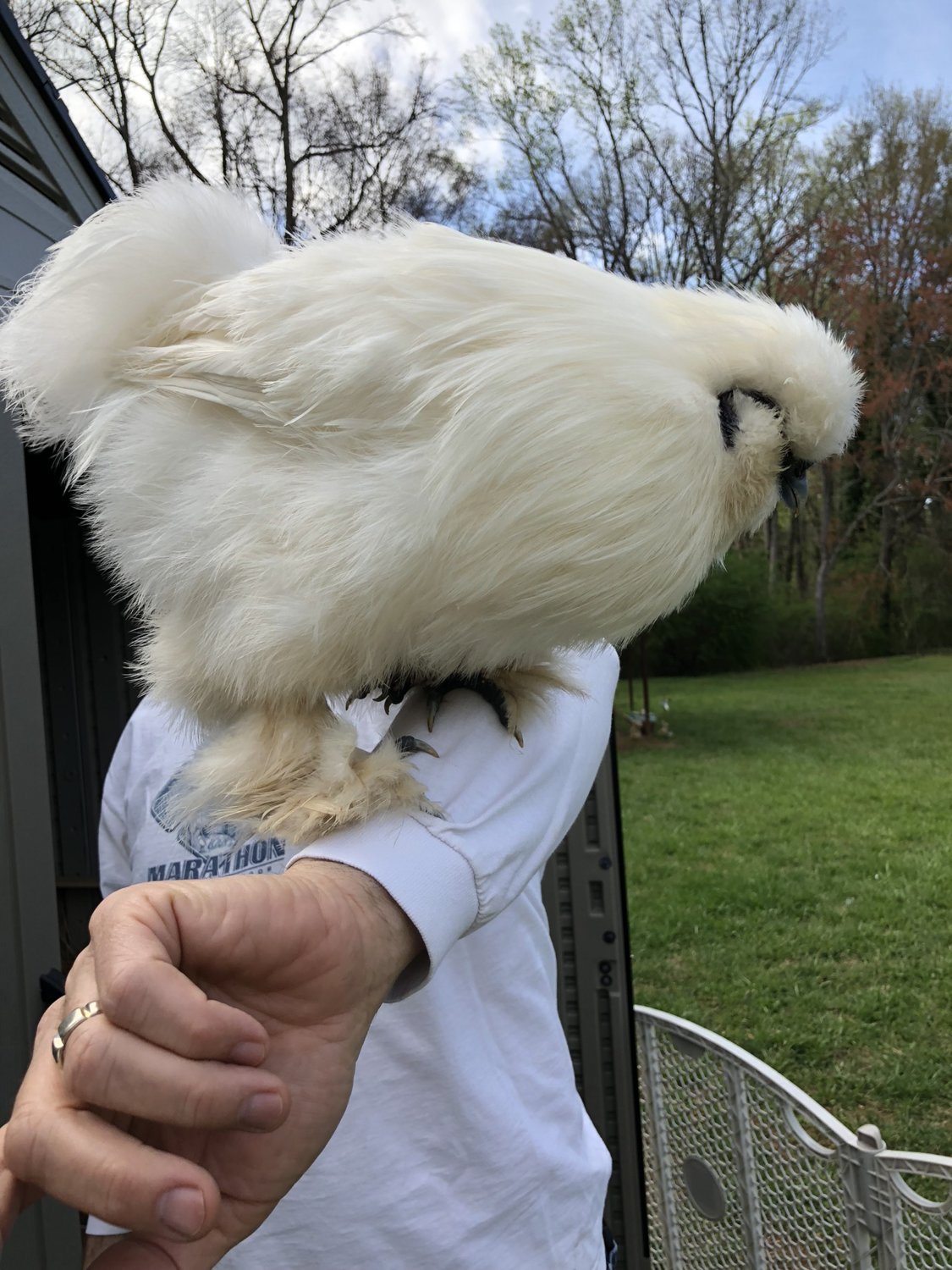 Gracie and the 2 year old above. Herb, dh, and Elvis, one of our first chickens. 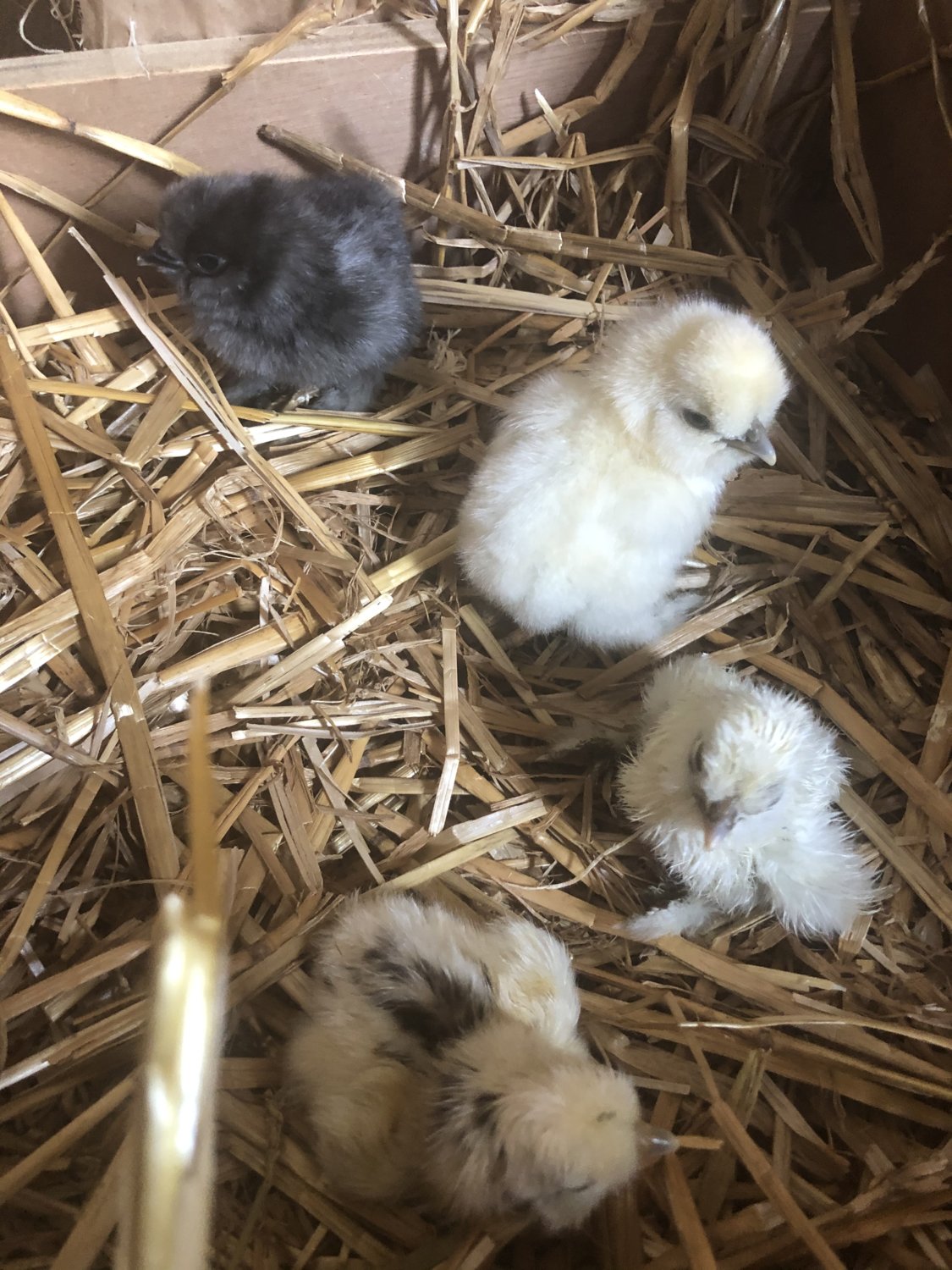 Newly hatched silkie chicks, selling the 2 yellows, keeping the one with the chipmunk stripe and the black one, at least for now. the teenagers, can’t wait to see how they grow out. looked pretty, but it was a poor hatch, still learning 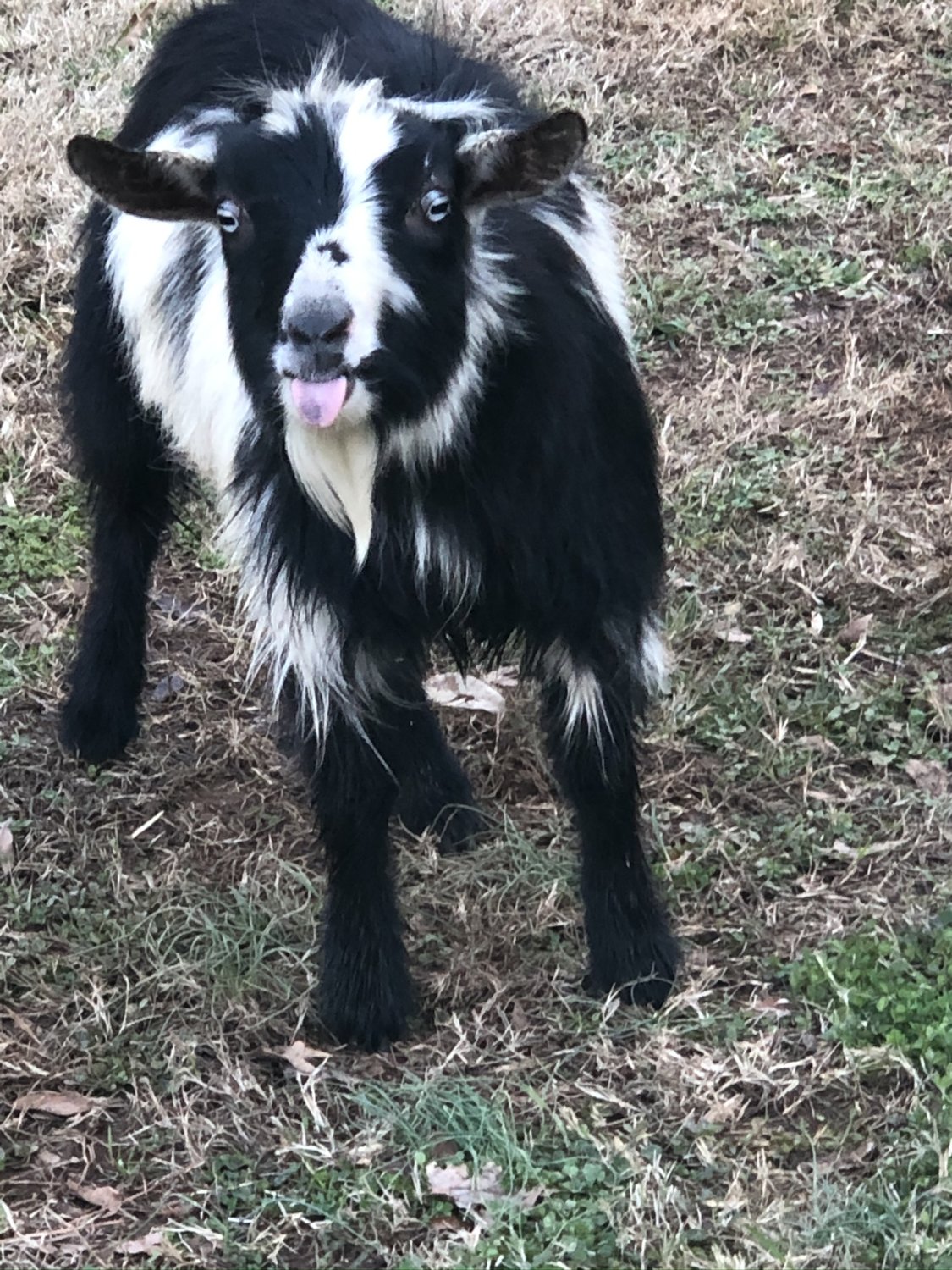 Cash, one of our bucks. Can’t wait to see what kind of babies he’ll throw. 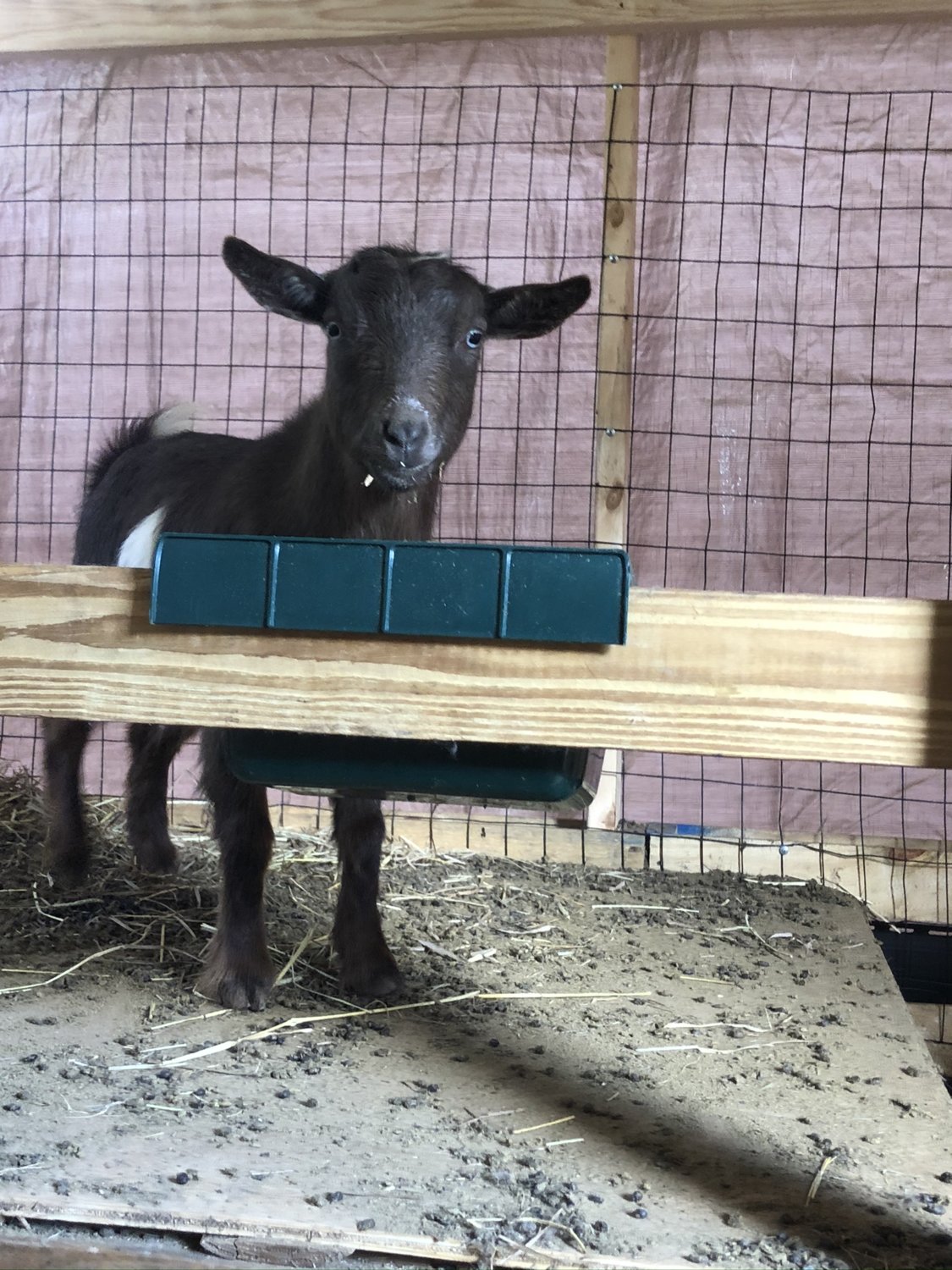 Dolly, our skittish doe. Hope she will settle in. 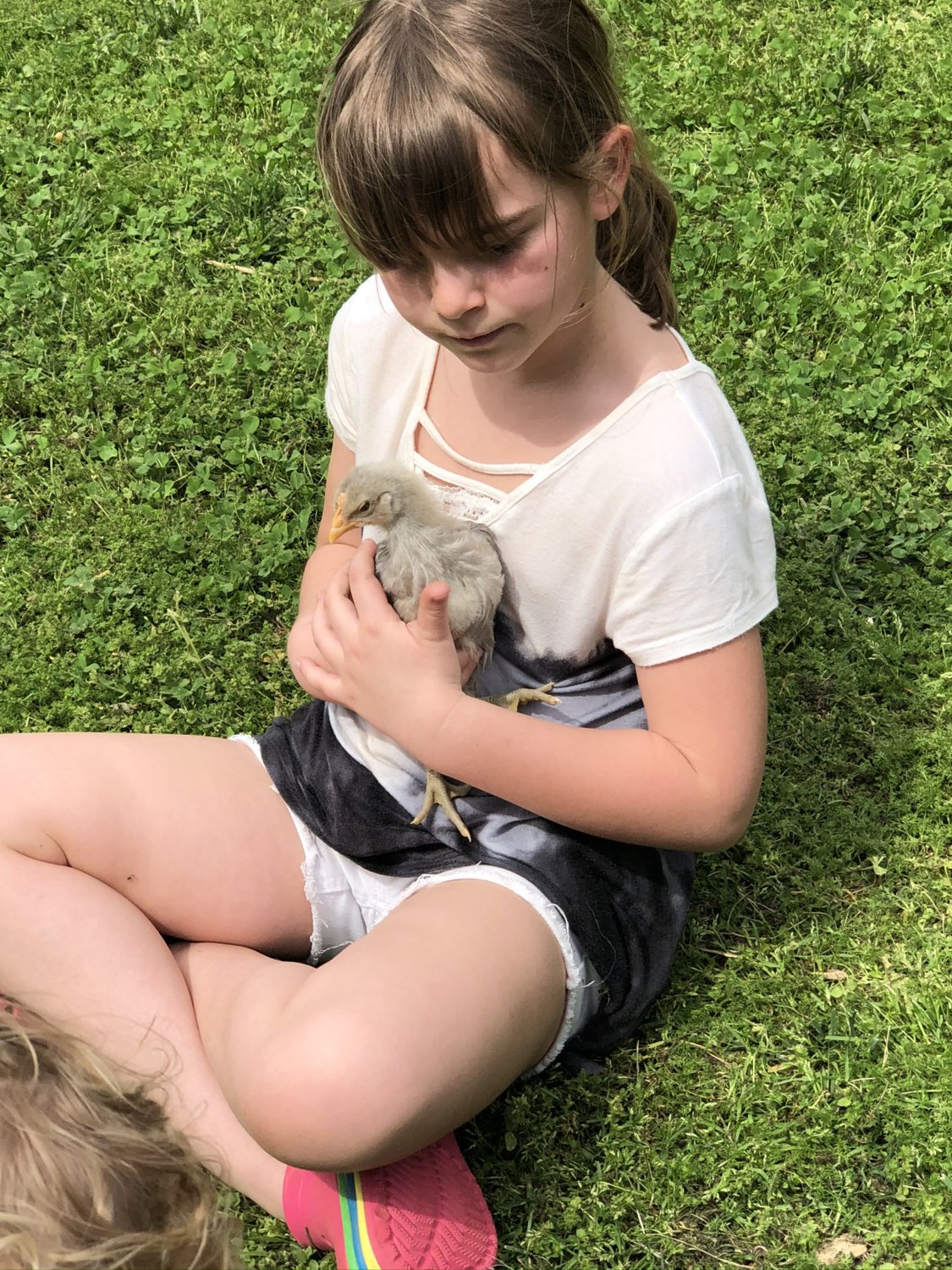 Fitz loves the kids and their toys. 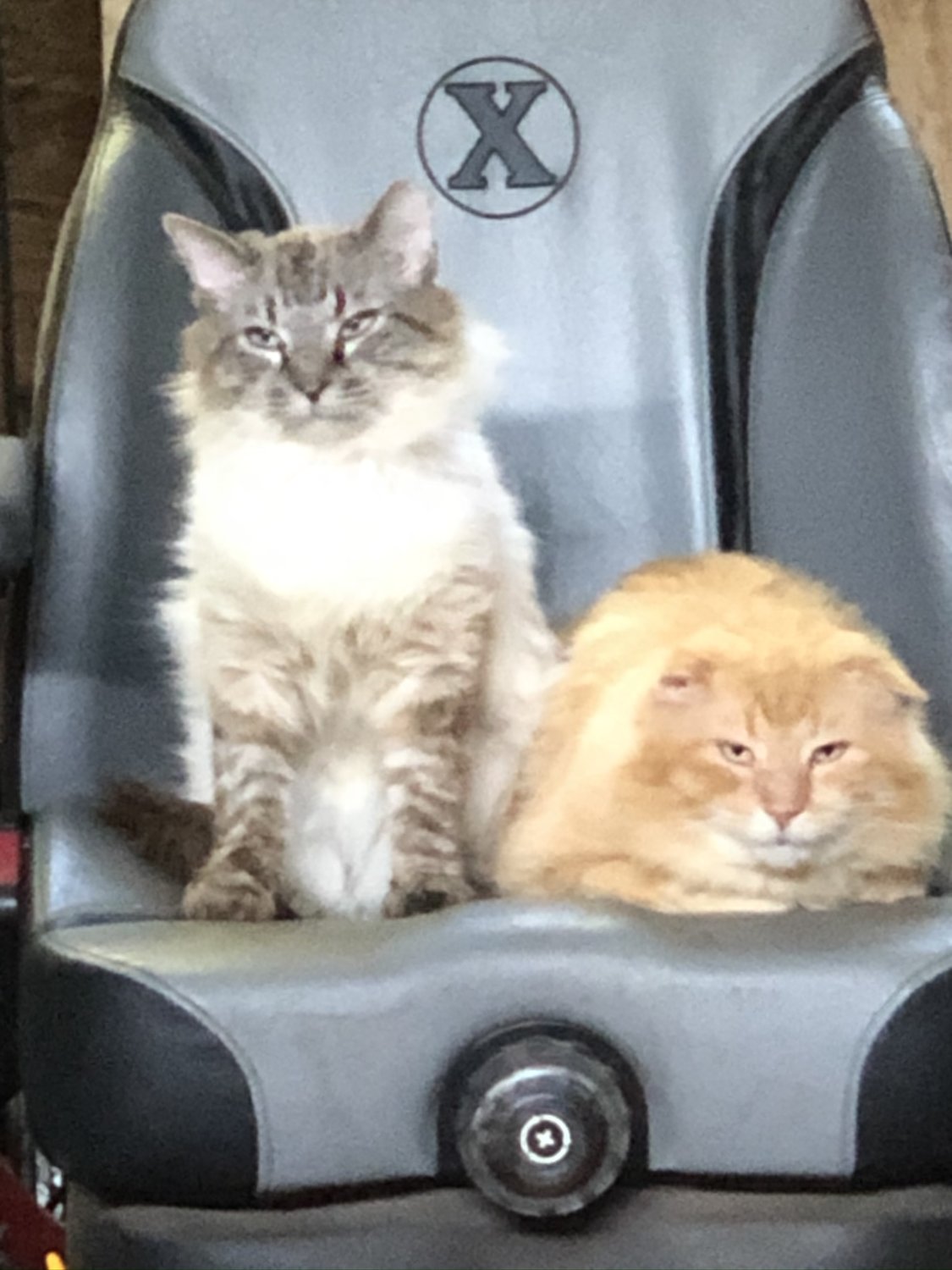 the barn cats Lucifer and O’Malley, reigning from the zero turn Willie our other buck. I’ll post more another time. Hope y’all enjoy the insight into our life on our Funny Farm.

Kids belong on a farm! Chickens and goat and dogs and kids-the human kind! What fun!

I'm glad you have started a journal. I am now following along.

I'm glad you have started a journal. I am now following along.

Thanks @Senile_Texas_Aggie, I wish I’d started it sooner. But better late than never. I love the life we’re creating on our little ‘farm’.

Baymule said:
Kids belong on a farm! Chickens and goat and dogs and kids-the human kind! What fun!
Click to expand...

All my favorite things. I’m with my grandson, I’d love to add a cow but heavens, I think we’d get run out of town. Need a little more property also. Not to mention, my sil might stop helping out when we travel. Who knows what the future holds. Just blessed that we’re here.

The rain stopped so I need to get out and take care of everyone this morning. But before doing that thought I’d post this pic. We have to go out of town overnight to finish cleaning out my mil‘s house. Our daughter is going to manage the chores this evening and in the morning with the help of her 5 year old. She came over last night for a crash course. Had to get her suited up otherwise Fitz would leave his mark of slobber. (He reminds me of Hooch from the old Tom Hanks movie, Turner and Hooch. If I had realized we were purchasing a slobber machine, we would have named him Hooch.). This is her son Harrison with his favorite chicken, Fiskars. 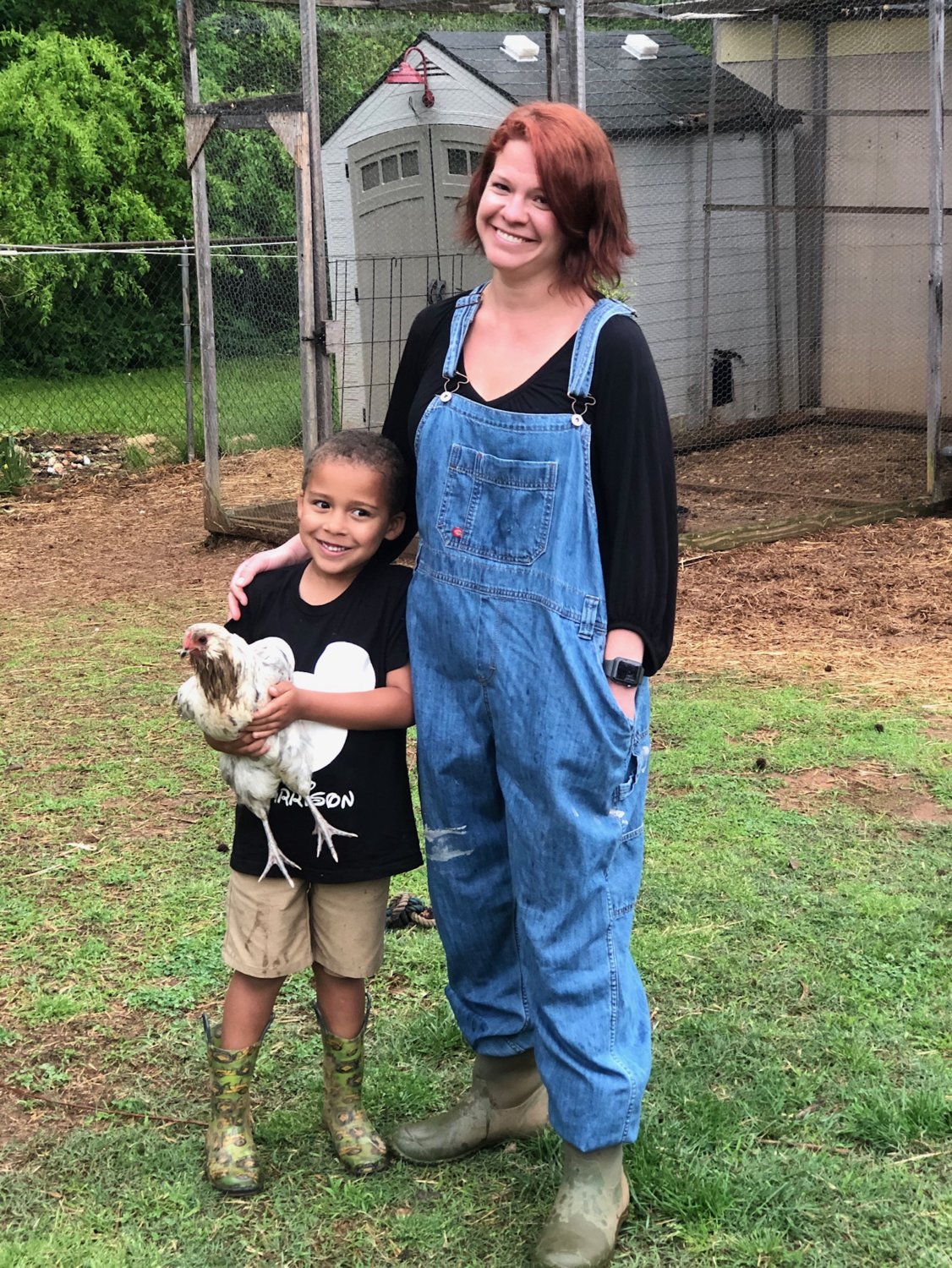 I love that picture. You should frame it and hang it on the wall! How precious.

bethh said:
All my favorite things. I’m with my grandson, I’d love to add a cow but heavens, I think we’d get run out of town. Need a little more property also. Not to mention, my sil might stop helping out when we travel. Who knows what the future holds. Just blessed that we’re here.
Click to expand...

In my experience a good farm sitter is hard to find lol. We have a couple that we use, mostly family, but it’s conundrum because if they are familiar with farming and animals they most likely have their own to take care of. We like to travel also so I try and keep my numbers manageable for that very reason. It’s hard

GardnerHomestead said:
In my experience a good farm sitter is hard to find lol. We have a couple that we use, mostly family, but it’s conundrum because if they are familiar with farming and animals they most likely have their own to take care of. We like to travel also so I try and keep my numbers manageable for that very reason. It’s hard

So very hard to find someone. Where I live, we are the odd balls. No one really close by that has farm animals. I used to work in a vet office and one of my co-workers would come take care of the animals but our critters have increased. I always paid her generously so that she would keep it up. My sil offered and I’ve taken him up on. He is a fantastic guy. His son is the one in the pic above with our daughter. I’ll see if I can post a short video our daughter sent of our grandson with Fiskars.
You must log in or register to reply here.
Share:
Reddit Pinterest Tumblr WhatsApp Email Share Link