Baymule said:
You are enjoying your tractor so much. I like reading about your tractor adventures.
Click to expand...

This morning I had the brilliant thought that there is no reason the reducer has to swivel, in fact that serves no purpose with a quick connect fitting screwed to it and is just a potential (and real on that one) fail area. So I went out to the mower to again remove the reducer to go back to Avance Auto. Now I know what that loud clunk was that I heard yesterday, the entire male fitting was sheared off (or pulled out of??) the end of the hose, only the crimp band remained. I guess I didn't have the hoses up as well as I thought though the other was still safely where I put it.

The saga continues. I Googled and found a truck repair place that makes hydraulic hoses. I went there, he cut the end of the hose to see what kind it was (would be needed regardless) and found that he didn't have a male threaded fitting that would work with the Gates connector nor did he have an adapter that would work with the hose fitting he did have. He sent me to the CAT repair place. They can only work with CAT hoses, they have a special crimper that they have to enter the hose part number and the machine applies the proper force in the proper places. They sent me to another truck repair place. He likely had that fitting but he won't crimp fittings on "used" hose even though this one had never been used under pressure, liability if it fails (seems like he would have the same liability issues with a hose he makes himself). He could make a new hose but doesn't have and likely can't get the 13mm banjo connector but could do something with a 90° if he had one that matched the banjo bolt thread (I hadn't brought that part) for about $60.

I'm sure the shift feature will be worth it, eventually

Got a reply from the WoodMaxx sales guy. He has "decided" that the crimps on the hoses failed, no fault of mine and is going to send 2 new ones (though I only need the one). I guess sometimes being nice DOES pay off. I was very patient with the quick hitch fiasco (as he called it) unlike some others.
Last edited: Jul 15, 2019

I would like to know what your impressions are of the flail mower after a couple of uses. I somehow got the impression that flail mowers were rather fragile, almost like a sickle mower, but then I saw a YouTube video (I think on GP outdoors) where the flail mower was used to cut tougher stuff than grass.

Will do. But to start - Flail mowers can uses "knives" or "hammers". The sales guy listened to what I was going to hack away at and said to get the knives. In theory they will chop down things up to 1" thick. The hammers are heavier so have more mass to put into whatever they hit. Since I'm not planning to intentionally hack at anything even 1", I took his advice. I think you can beat up somewhat larger stuff with the hammers but not as big as you can with a brush hog.

Sadly, there is more non grass than grass in my "used to be a hay field" fields. I would guess that the thicker "woodier" stuff is about the thickness of my little finger and the mower had no issues chopping that up. It bogged a little when I got into really dense stuff that was like thick bladed grass, I just slowed down and no problem. I'll take a couple of pictures of what I have left to cut and what is on the ground post mowing. It is chopped up pretty well but not super short pieces. I think they would be shorter if the pre cut stuff wasn't so tall.

I don't know if a flail is fragile or not. There are a lot of knives/hammers, especially if one gets a finish mower. If you lose one, it needs to be replaced and from what I read on TractorByNet, the attachment is machine specific, some use clevis and cotter pins, some use bolts and nuts. A sickle bar mower would be nice for cutting under trees, Al's is a 6'. I know he's had to weld it near the pivot point a couple of times but the machine is old so that might not be a specific weak point though it is where the most stress is on the machine. The problem I have with them is that they are meant to cut near ground level leaving the entire upper part lying flat on the ground, sometimes thick stemmed stuff is pushed over under the just cut stuff and not cut at all, creating a mat that keeps anything from growing up through it. That is OK if you are cutting hay and are going to rake and bale it but that isn't the case here. Since we've had the place, the stuff being cut and dropped is 3'-4' high by the time it gets mowed.

I really dislike having to "chew" grass 3-4 times to get it broken down enough that I didn't have to "wear it" each time I turned into the wind.....

Maybe you need a bagger!

Some mowing pictures
Some of the thicker stemmed stuff 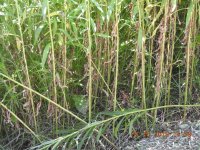 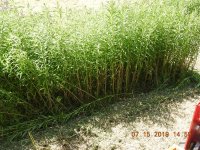 Going to cut this 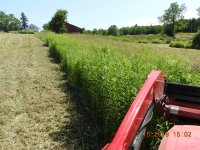 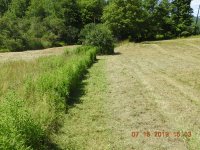 This turned out to not be as nauseating as I feared

I left patches of these flowers, the bees seem to like them. Are they possibly Bee Balm? 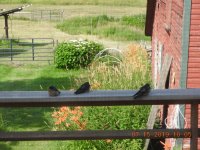 That mower is doing a good job. It is leaving a smooth cut without a bunch of clumps.

I agree...looks like it did quite the job for ya....now ya can enjoy even more parts of your place there....I'm still thinking about putting up a "shootin gallery" for the BB gun, here....can't play golf...don't care about being in an ocean....and I'm not fishing with gators, either....cause I sure as heck can't run....

Bruce said:
I left patches of these flowers, the bees seem to like them. Are they possibly Bee Balm?
Click to expand...

Bruce said:
Who is the resident flower expert here??
Click to expand...

We have a friend in South Carolina who is. I can copy your picture and ask him what it is if you want.