Can you put something over the sink to prevent the cat fur from going into the sink when the cat is brushed? Thinking like a large cutting board or a piece of plywood? Would give the cat something additional to stand on as well.

I suppose we could, not a bad idea. It wasn't a problem with the old sink. Now to find his brush, it has gone missing.

You could even just put a towel over the sink.

I thought you were going to say the hair got in there because that’s where the cat likes to sleep! We had a cat once who loved to curl up inside the bathroom sink.

That could be fun, especially if he steps on the booby trap

He fell in the bathtub once when he was little. Didn't seem to care for that though he will occasionally roll around in the shower when the floor is dry.

Been working on some firewood collection. My sister-in-law and I found this tree about 110' from the NW corner of the field while snowshoeing last winter. The still standing part is 20' high and 22" at the base. 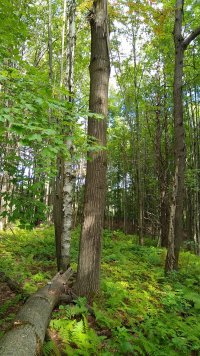 I have no idea what happened but the rest of the tree just splintered off. It is another 45ish feet to where the larger branches get small 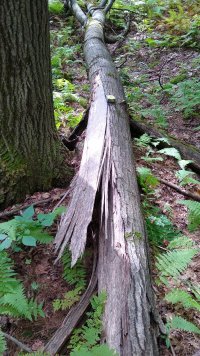 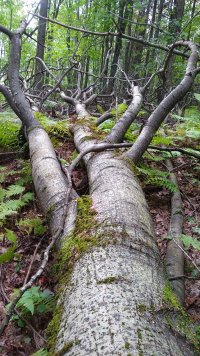 I would not want to cut down a tree that big! It would for sure get hung up in other trees because that is how my logging always goes. But nature made it easy. Other than running out of gas in the Echo Timberwolf a few inches shy of dropping the standing part and having to finish with the little Stihl MS180, it was pretty easy.
Last edited: Sep 20, 2021

Wow, Mr. @Bruce! That looks like it will supply you with firewood all winter!

Are there many people in your area that burn wood for heat? If there are, do you think that you could become a firewood provider for them? Or are there many people who have woods on their properties that have dead standing trees that they would like taken down and would give you the wood? I keep thinking about how you burn firewood and you are so good at it. It seems a shame that you can't turn that into a profitable business. Then you could buy the Wallenstein winch and put it to good and profitable use.

Too much work!!!! I have never yet cut enough for one winter's need which is 4 cords. I did figure out last year that I really have no idea how much tree it takes to make a cord. While this tree is big I'm sure it isn't close to 4 cords. Maybe 1, 1.5? I've got my wood for this year, 2.5 cords of it came from Al down the road.
M

It's a huge amount of work! Even if another fells the trees for you. Cutting, splitting, stacking...whoa! I had a wood stove when I built. Switched out to propane!! Oh, I have a central system beyond the propane stove but, use little. Mostly I live in downstairs of my 2 story house. So central heat and AC can be costly for double size space I need. So I heat and cool only downstairs...shutting top off, unless I have visitors to use.

DD uses wood for days she's home, in her house. I help her get wood and stack. She has a splitter. Still a lot of work. She's mentioned a propane FP insert.

Is your propane cheap? The people that bought our old house had been living in a rental with an oil hot air furnace and a propane insert. She said they hardly ever used the insert because it cost so much to run.

So here she is wearing her Lumberjack sash and pulley 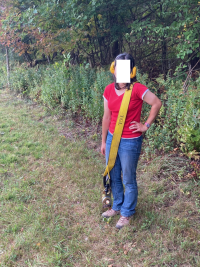 STA - I guess you can sing "I'm a Lumberjack" now because she has no problem dressing up in women's clothes. She isn't prone to hanging out in bars though.

Here I've got the last big piece and some small stuff. 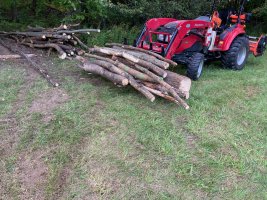 I've bribed her to help me in the morning after breakfast (the bribe) to get the rest of the "small" pieces. A grapple would be quite helpful with that.

Almost as amazing as DD2 actually offering to help is this flock of turkeys. DD2 spotted them as we pulled the last big piece (the bottom of the broken off upper part) out to the field. Clearly they are quite distressed at our noise and presence 100' away. I guess they know hunting season doesn't start until October? 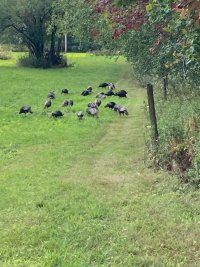