I am not sure how to explain cover crops any better. If you google it, wikipedia gives a good over all definition. A cover crop is grown for 2 purposes.... to cover the ground so there is little or no erosion, and to enrich the soil while it prevents erosion, A cover crop, "covers" the bare ground. It is planted after a different crop is harvested. Hay is not technically considered a cover crop even though it is a crop that covers the ground. But you can call it that in some different situations.
There are several sites that you can go to, to learn more about cover crops. Understand that they are usually planted to cover the bare soil, they are to improve the soil because they are often used as a green manure crop that is plowed under or they are killed and left on top of the soil to provide a "mulch" for another emerging crop and they will break down to improve the soil in that way. They can be harvested also and the stems or stalks can be plowed under as a "fertilizer" in the way of adding organic matter to the soil. They are normally only on the ground for a short time, half a year. The purpose is to bridge the time between the crop you are growing, like corn or soybeans, from the time they are harvested, until the ground is replanted the following year to the desired "cash crop".
They are used to help put back into the soil some of what the "primary crop" takes out of the soil. They will add needed organic matter in some way which makes the soil more able to provide nutrition for the primary crop being grown. They are basically a "growing" form of fertilizer and soil improver.

@Bruce ..more good points..as always!! So, last night we talked about alll of this, and my need for a barn. We agreed..to do another semi trailer...ugh. But, it really does work very well, and the little changes I’d like..we can improve. It’s much much cheaper than a big barn. As for the hay, he said he does want to do much this year..we are going to mainly buy it. Just plant a bit to tr6 it out and get our soil ready. He thinks our soil will take quite awhile. It’s a lot of clay..plus it was Timothy hay, that has a lot of ragweed in some spots. It hasn’t been dealt with for years. So, this year is, I guess the prep work. As for the corn...he doesn’t want a combine after all!! Whoosh!! He wants to plant enough, this year, as a trial run...for the animals...but, none of them can really eat it...pigs...lol...we can sell a bit..but he’s worried it won’t be good enough to sell, so we can’t plant it where anyone would see it. Ugh! So, this rear Is basically to get the soil ready fenxt year
, if decide to try haying exp the next maybe... I

Bruce said:
That young man has a great grasp on how the financials work on the farm.
Click to expand...

Sorry about typos in last two posts...it’s been nuts around here and most days I don’t get on here until around midnight..ugh. But @Bruce ...I think we are just going to get soil right...try a bit of hay...and plant some corn. The corn will be a test drive, until we see how that goes too. We are also thinking of moving our main garden, due to it turning out to be wetter than we realized, despite many trenches, etc. but Chris is a grower, so I leave that up to him and follow his lead. We could use that garden for pumpkins, they are more hardy. Ok, so in other HUGE news...our mini pig, Petuna had piglets last night!! Up til around 3? We have 8 perfectly healthy...and one that is really struggling. But, she made it through the night. She can’t suckle, only has one eye open and not much hair...plus she’s tiny. So, we’re gonna do whatever we can for her...

Cover crop, based on my understanding, is green fertilizer, among other things. Anytime things are fallow (not actively growing something), they can be used to help set up the soil for next season. From what I understand, some die off, others are tilled in. Some may be both...what do I know. Some may have burned them based on where I was living. Cover crops add organic matter to the ground. They also prevent erosion because any time you've got bare ground, that's a multiple front problem. They can also be used to smother out or prevent weeds.

BUT this is all from listening to people talk while growing up in Iowa, so it should be fact checked. And sometimes those people were other children...sooo...you know.

Think fertilizer, erosion control, weeds, wind in regards to cover crop, if you want to. But again, I got it second hand fromfarm kids.

Here is a video of PA Farms planting a cover crop of rye and radishes last November:

Here is a video of PA Farms planting a cover crop of rye and radishes last November:

Awesome!! Thank you so much!! @rachels.haven ..it is verrry windy here...like..some our stems break after we plant from in the green house..it’s a trick balancing act. So, that’s great to know about a wind factor. We definitely are not sheep this year. Now with 4 bred mini pigs...one delivered last night..goat breeding..new crops...55 chickens now...were up to our ears with work!! But, I got this lady’s number for down the road. Very nice. Was going to give us a package deal. My kind of lady!!

@rachels.haven , @B&B Happy goats , @frustratedearthmother , @Jesusfreak101 ...all goat people!!! Busty has been making much less milk since I changed up the grain mix to less rich feed, for better digestion, and avoid bloat. I went with as close to the mix as @rachels.haven suggested. She likes it just fine...eating a lot, poop is much better looking..but her milk has dropped to maybe half?? I don’t measure, so.... but, now coming up in April I have to vendors who want dairy stuff. How can I get her milk back up without hurting her? I don’t think she’s letting the kids nurse, every time I see, she kicks them off. They dooo try to scramble up if she jumps on the stand before I get them locked in the stall for the milking. So, do I force wean? At this point, also, Busty and Stormy, my two original goats, are bullying the kid to Honey. A sugar sleeps under the milk stand. I hate this! I try to stop it when I’m there.but, you know how tha5 is....My smallest kid, Roxy, can kinda fit through the cattle fencing...she did last week, but know she stays in. I’m worried that if I keep my moms in the barn, the kids..Roxy, will get out when I’m not there? We don’t have budget to put up new fencing immediately? Also, there’s the issue with Sugars actua age. The guy that owned the farm we got the does from , wasn’t living there the past 8 mths. He didnt know a thing about her. The people there...were no help. There was no kidding stall..the6 guessed at gopher age, that she was about a month. Well, she’s wayyyy bigger than my kids. And she’s an ND. Her hooves, when we bought her were grown, all around, like, a circle...the walls were up around. I figured it was due to the peopl3 who were caring for the farm just didn’t understand goat care. I had Honeys vet records, she was good to go. Now, because she is..often trying to fornicate with her mom..Chris thinks she is almost ready to breed. I said no way..maybe late summer. I looked at her teeth..very clean..separated. Looked at Busty’s..because I don’t want he4 to b3 old..I love her soooo dear. They have some brown.....she didn’t let me get a good look..I need to use the syrup she loves for a better look. But she limps about every other day..on the other hoove. I continue to clean them out...trim a tad...what ever. Chris just thinks she’s getting old. But she avoids the mud..which it everywhere right now...very deep. Not good for goats...I have them on highe4 ground, but the6 still have to go through it, and boy do I h that! I laid hay down today...hopefully it will help..sometimes it does, sometimes, not so much. So, if I separate the kids...then put them all back..will the bullying of Sugar be even worse? I love that little goat..her mom doesn’t even stick up for her much, she cares more about the feed.

Anyways..the min8 pig adventur last night was much different than kidding!! Took forever!! And no sac...well, a thin thing, but.they weren’t really, wet.and didn’t have to suck out the goo, all of that... There was a traffic jam..of course. Had to reach in...wayyyyy in. Tiny cavity. barely could fit. Felt a tiny round thing..but no pigs. We though5 we were done with only four on the ground. Chris went back out in an hour and she was having more. at the very end..after placenta, she had..this little, skeleton...in a sack. The V’s told me it’s called a mummy. Sure was one! So sad. She said the6 cause the traffic jam ever6 time and you can lose the whoke litter. So, it turned out good that I went in and felt around because it jogged them around! We also have one, not developed. We are trying to help her, against the advice of the V’s. I’ve been down this road with my poor duck Little Lou...and had to put him down. But Chris thinks this girl has a chance so we’re giving it the go and gusto that we can!! But, it doesn’t look good. I’m focusing on the 9 healthy ones..sooo darned cute!! 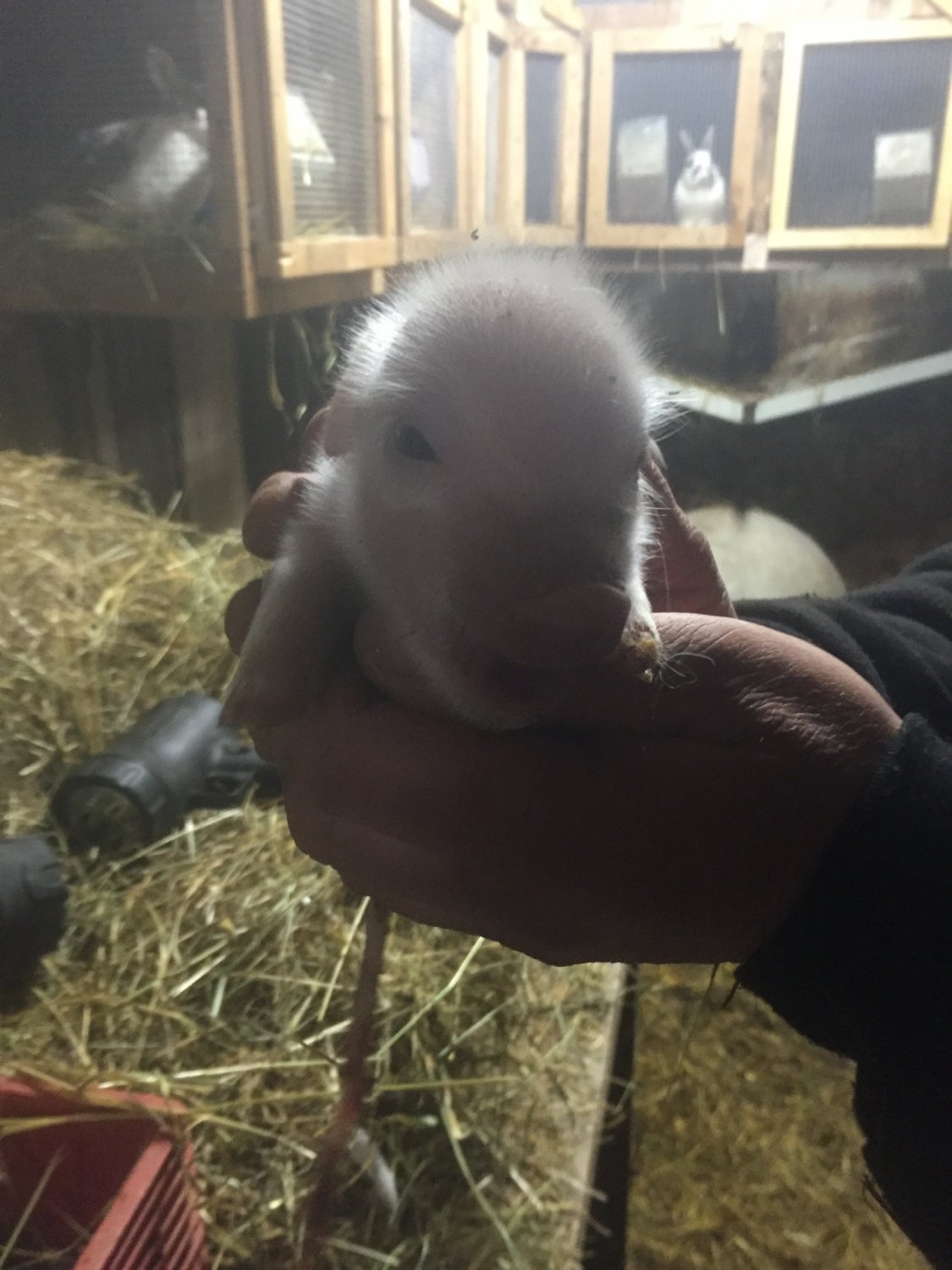 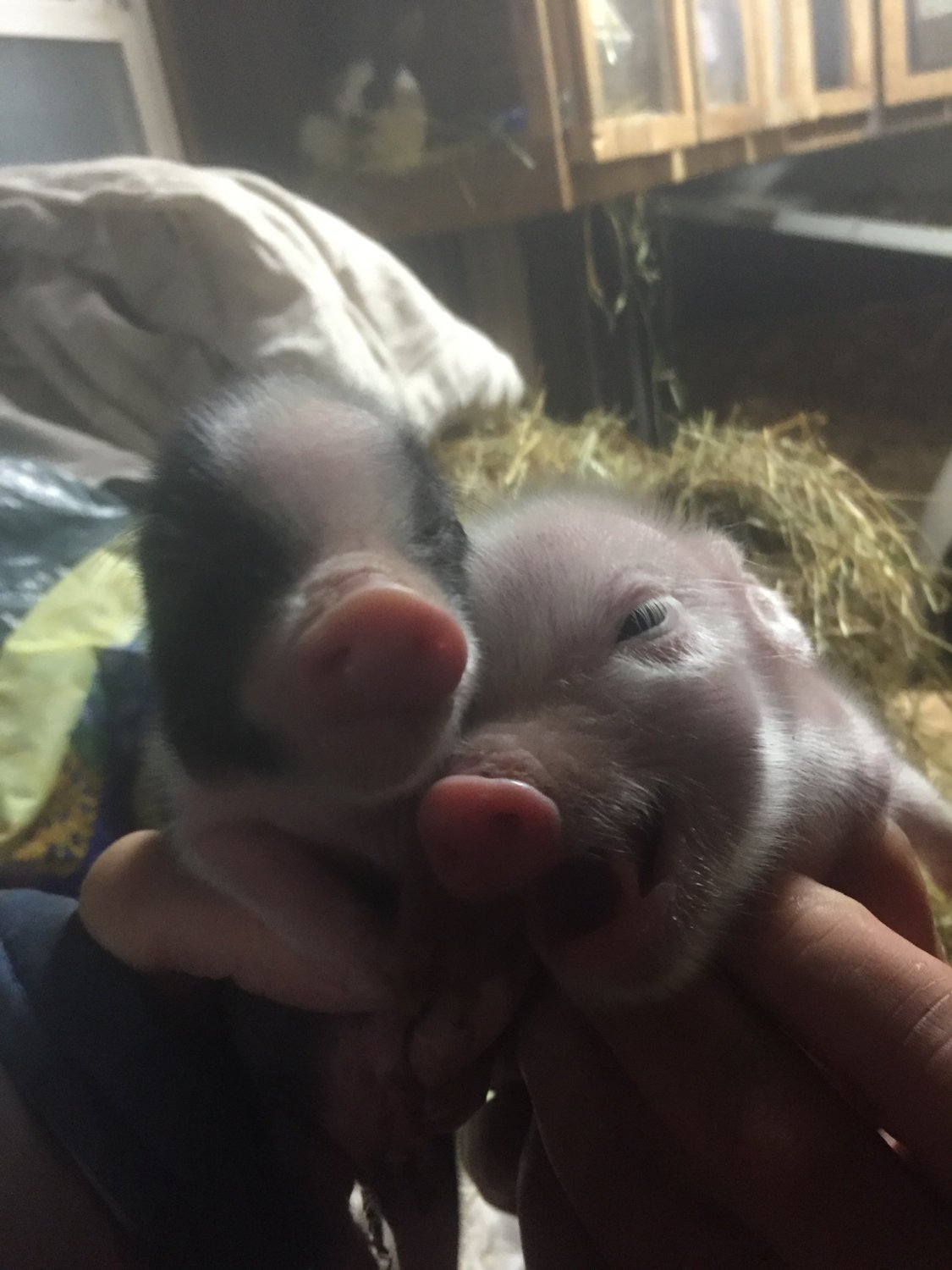 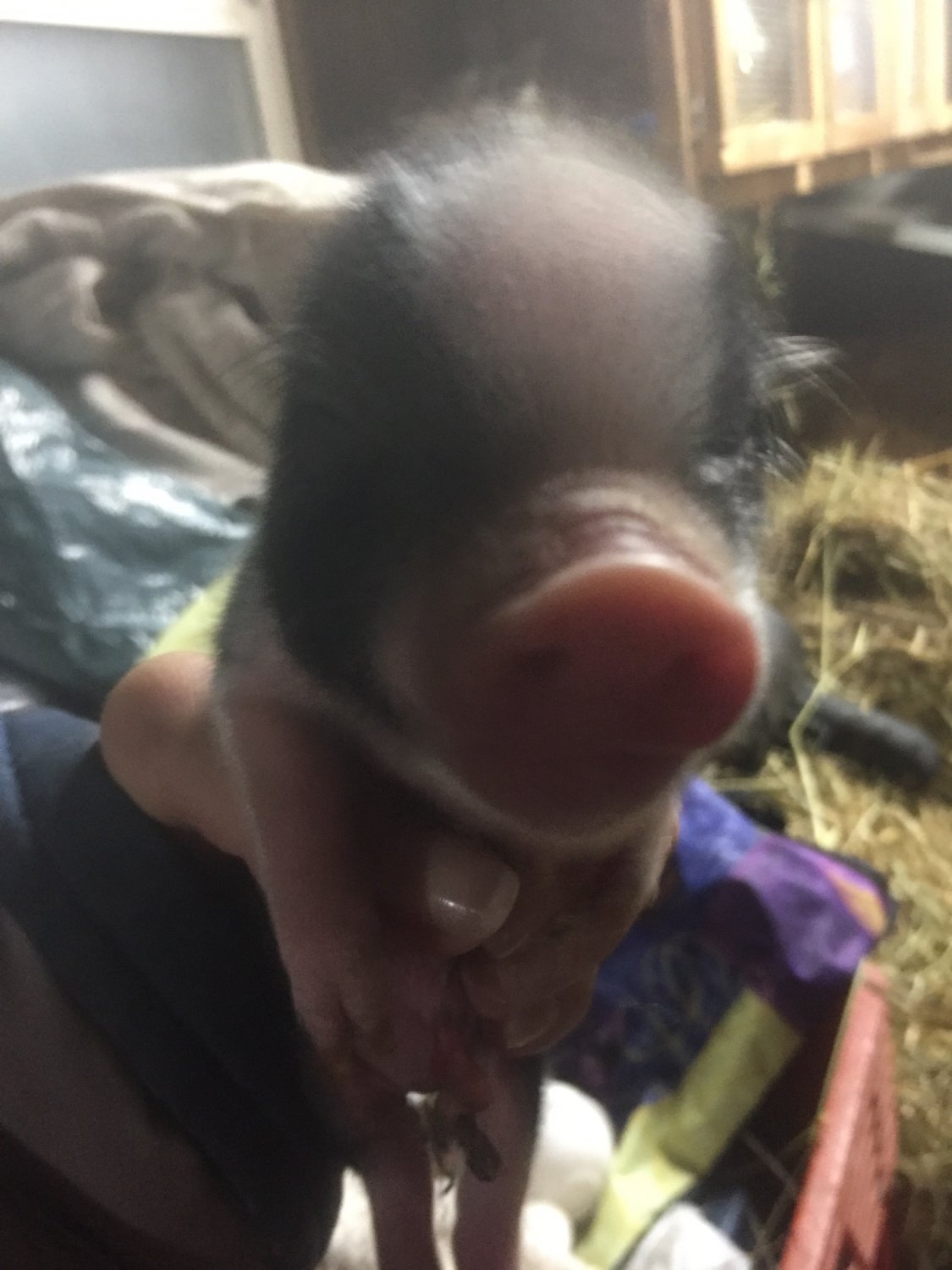 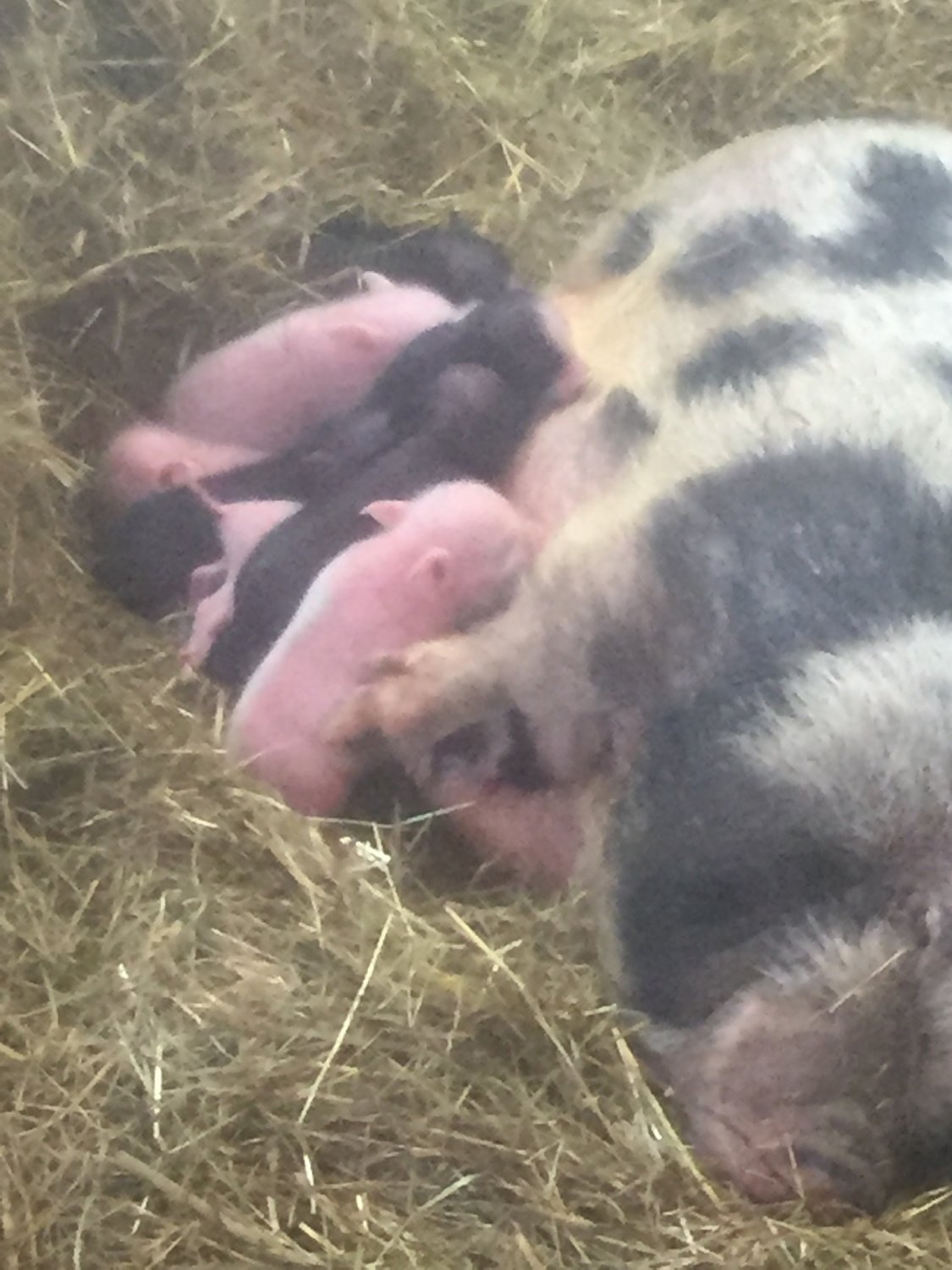 Ducky, your baby pigs are adorable !
I can't give you any advice on the feeding of your goats as I am completely confused on what you are trying to accomplish.....are you raising the goats as pets or are you trying to meet obligations that you have promised for cheese?