Can anyone tell me more about alpacas behavioral habits? (4-H project)

I am currently in 4-H and i am setting some goals and objectives this year. One them is to learn more about alpacas behavioral habits, like cushing, likes and dislikes, etc.
If anyone can tell me more on this topic please let me know, i would really appreciate it!

Have you seen Kuzco, from The Emperor's New Groove?
Yeah, that. All of that.

They don't even touch or lick their newborn babies!
They don't like touching, they don't really spit at people, unlike llamas.
They love water and being hosed. They can be chatty or super creeping and quiet. They don't do anything they don't have to. Very easy to handle and work with. They prefer cloudy days, as the squint in full sun all the time.

Oh, they will crawl under fencing...Limbo champs!
Mine didn't jump any height fence.

They hate mud! A puddle in their way will stress them out and they'll start squeaking/humming and pacing and then do a pathetic hop over it.

They're highly curious, but since they lothe anything touching their noses, they're kinda spazy and twitchy meeting new animals. 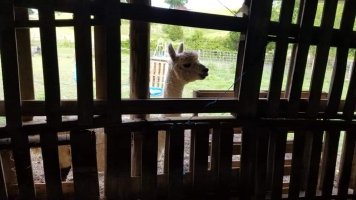 Cushing is just laying down.

Cushing is lying down, legs tucked under, head up.

I have 2 gelded boys given to me as adults by neighbors moving to Florida. Everything I post is what I know from owning these boys.

Alpacas are SUPPOSED to like carrots and apples as treats .... mine don't. About the only "treat" they seem to like is the all stock sweet feed mixed in with their maintenance pellets.

They "allow" their nails to be cut but aren't happy about it, they don't ever want to be touched.

One (Teddy) will put up with being sheared but isn't happy about it. The other one (Laddie) fights the entire time, he is a workout. I made a stand 18" off the ground to make it easier for me. Typically they are stretched out on the ground but that seems stressful to me. I understand why professional shearers do it, a really good one can get the animal done in 10-15 minutes. It takes us over an hour to do Teddy. I bought electric shears but these boys love rolling in the dirt and the cutter gets dull before half of one side is done. I've been using hand shears and large kitchen scissors. Good thing we don't care what they look like!

Laddie will spit at Teddy ... and us when we are trying to get him haltered for shearing or nail trimming (we've managed to miss being hit). A towel over their face makes it hard for them to aim. By the way, alpacas do not spit saliva like one might assume, they spit from the contents of the first chamber of their stomach. STINKY!!!

Mine REALLY don't like first cut hay, they think of it as stall bedding, not food. Not sure how they stayed alive the first few years before I started getting second cut.

They don't mind standing out in snow or rain but will hang in the barn or the shadows on the north side in the summer, ever after being sheared. They really are not designed for heat. I've never tried hosing them down. They will wade in the farm pond behind the barn in the summer, to cool off I suppose though there's nothing feeding the pond other than rain so I don't imagine it is all that cool.

A neighbor across the road has 3 horses and 2 alpacas. Like @secuono said, limbo champ. Their black one just ducks under the wide tape. I don't know if they have the electricity on but I doubt it would get through the thick fiber anyway. For him the grass IS always greener on the other side since there are no grazing animals on the neighboring properties. No fences either but he's never wandered far nor into the road. If I approach him he will calmly walk back to the fence and duck under into his pasture.

Neither of mine ever attempted to get out of the falling apart 3'-4' high chicken wire fence that was here when we bought the place. They could have easily done so. It enclosed about 1/2 acre. I've replaced it with 4' knotted 2x4 wire fencing on 5' posts with hot wire at 4.5' (to keep predators from getting my chickens) and increased the area to 1 acre.

They are curious, want to know what you are doing. Don't look at them though, it makes them nervous. Even though they are 150 pounds and look pretty big, they are prey animals and as such are wary of "predators" sizing them up.

Mine REALLY don't like cats, they will alert on a cat out in the field I can't even see without binoculars. They used to alert on the wild turkey flock and deer though they seem to have gotten over that.

Alpacas use a community poop and pee pile rather than just going wherever they are like sheep and goats. The pile "moves" as they use the edge. Mine have taken to pooping in the barn alley where they usually spend the night in the winter. They have a door that is open 24x7 so there is no excuse for this. Hopefully that will stop when spring comes around and they will go back to using an outside pile.
You must log in or register to reply here.
Share:
Reddit Pinterest Tumblr WhatsApp Email Share Link