Mini Horses said:
Wow, that's 6 buns for what they need to do a run of yarn, 1X a year. How many do you have? Add shipping, etc., that's some expensive yarn....I would guess. Well, a luxury item.

Currently, I think there's around 44 bunnies out there, although 18 of them are less than a week old and not providing fiber yet. 3 of them moved to Maui yesterday and will be helping folks over there make yarn. Hmm, so there's only 41 at the moment, then.

The Hula Bunny yarn sells at our local shop for $16 per ounce and it's roughly 120 yards per ounce, I think. I'll have to check the numbers for this run, it varies a little bit but not by much. That's expensive for yarn, but not out of the usual ballpark for a luxury yarn.

'Economy of scale' type of production doesn't work with a backyard herd. When only a little bit of something is produced, the only way to be economically viable is to produce a high end product. That's somewhere over $2K retail value of luxury yarn that came back from the mill yesterday. If it were sheep's wool, it would be about $700 - $900 and the production costs would be very similar. There is more work in getting bunny fluff, though, since there's multiple shearings and they need daily care since they're not out grazing on their own.

Even though it was commercially spun by a small mom-n-pop mill, there's still a lot more work to get it ready for the shop. The yarn back from the mill moves on to the next step in the production of yarn for the shop. 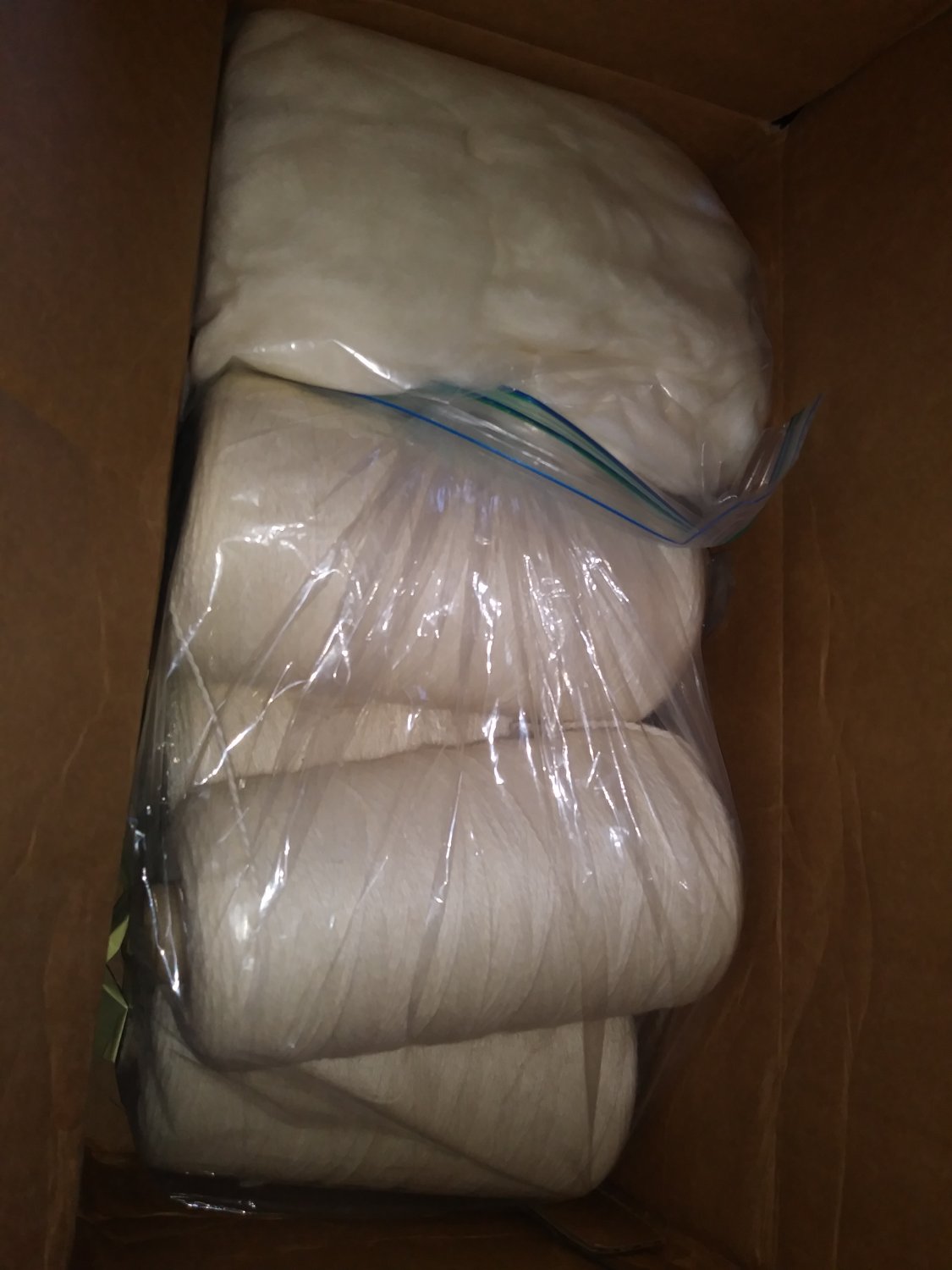 It's on cones, so I still have to skein it up into one ounce skeins to sell at the shop. And after it's skeined, I will have to add labels so that will take some more time. Then take it into the shop and set up a display of it. I've got a new rack for that and will try to get three colors of Hula Bunny yarn on the rack.

I also knit things out of it and sell those at the shop. Sold a $420 shawl yesterday, although the shop will get a 12% commission on that - which is a really low commission rate , but I also pay a base rent for my space in the shop and work four days a month there. We sell a bunch of stuff other than the yarn and knitted things so the shop is profitable without the yarn but it is a nice place to sell the yarn. If it were sold wholesale, I'd get half the retail rate or even less than that. 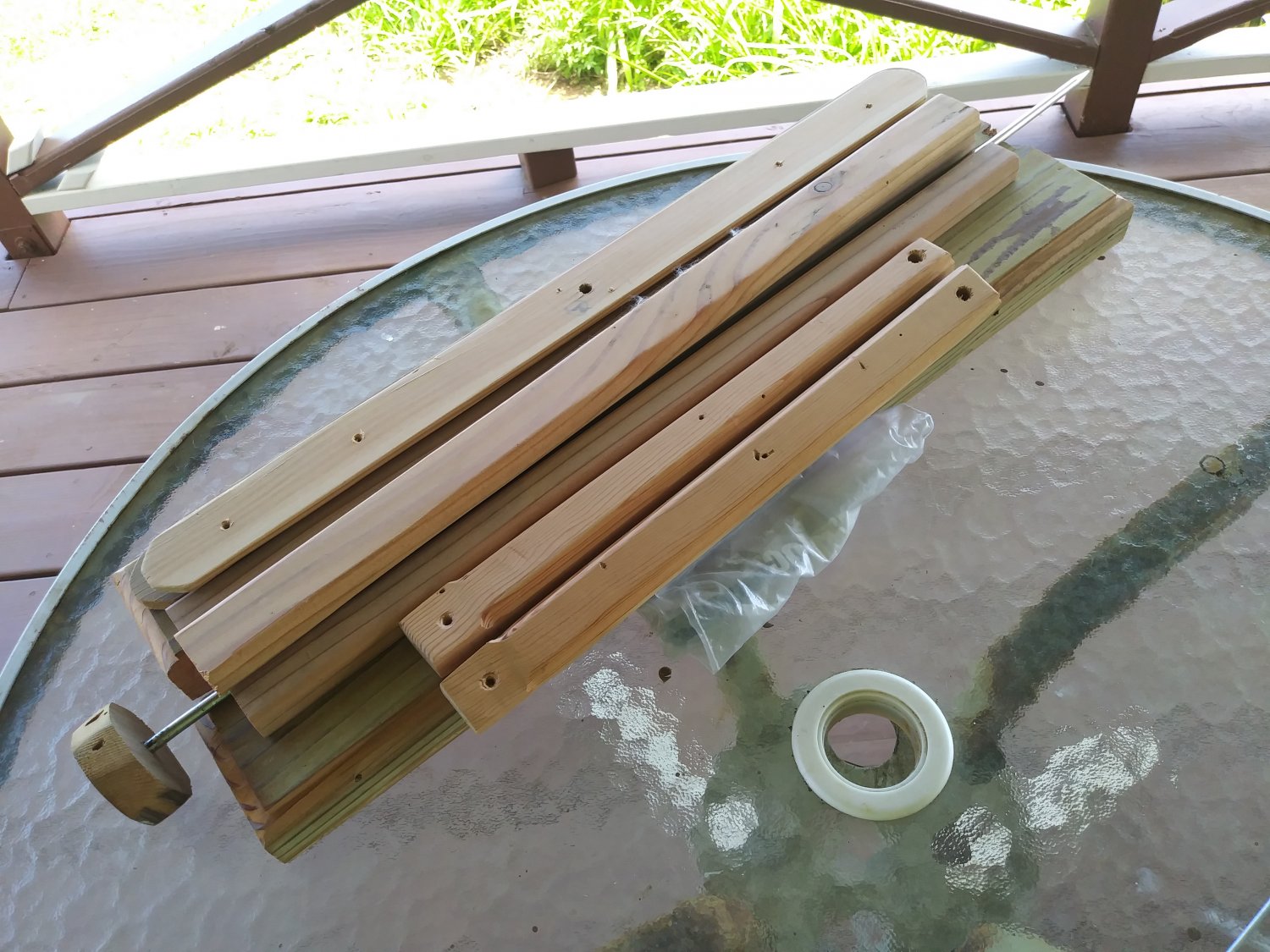 This is a 'skeiner' which takes the yarn off the cones and puts it into a skein so it can be sold. Since yarn only comes back from the mill once or twice a year, it was designed to break down into a flat pile. A lot of yarn equipment such as looms and skeiners and even knitting needles is 'just sticks'. Kinda like playing with sticks and string, really. 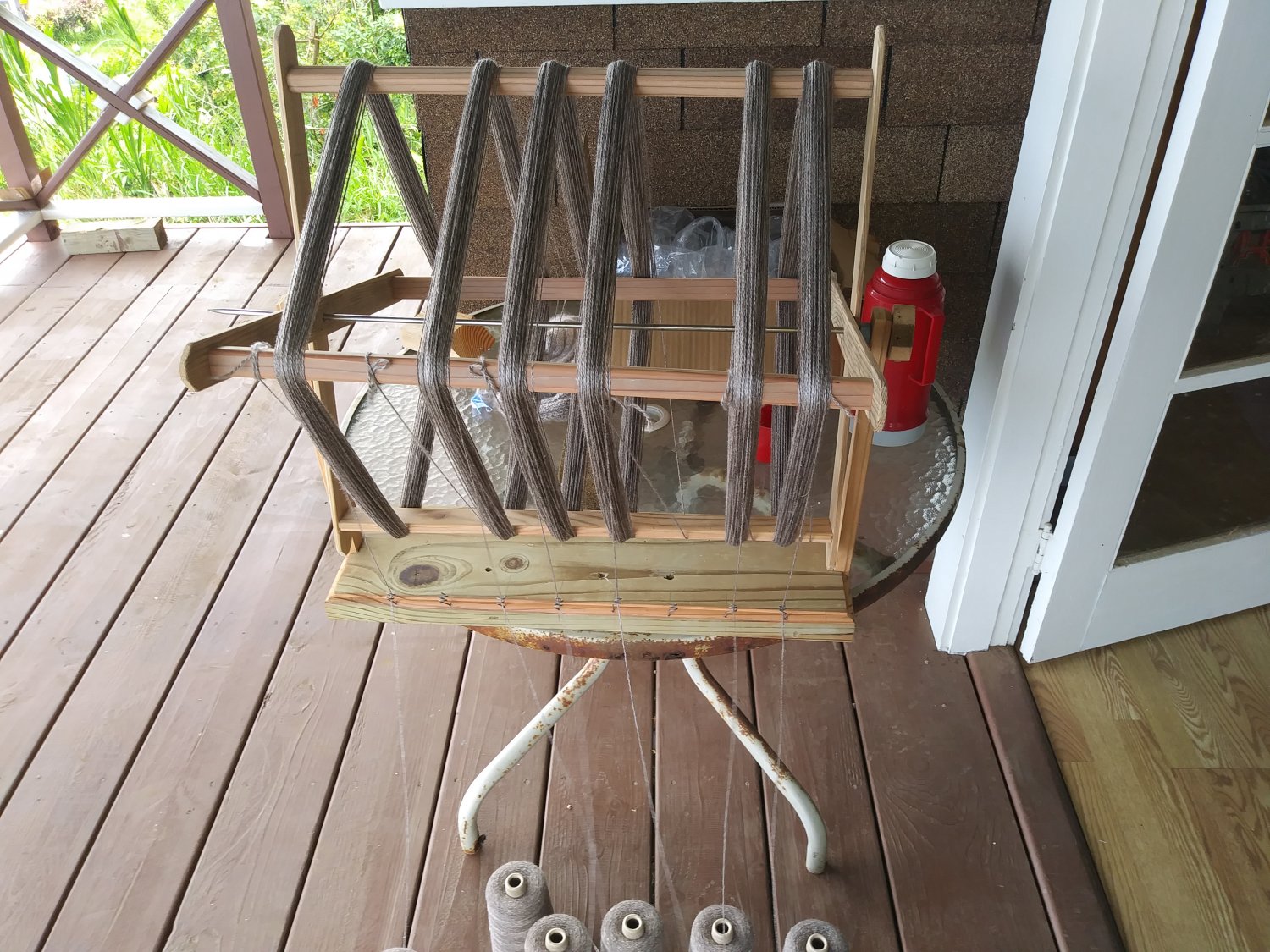 When it's assembled, it's pretty large and it would take up too much storage space. But, it twirls around and makes skeins. They're tied together in several places and then the arms of the skeiner fold together and the metal rod pulls out of the center so the skeins can be taken off and twisted together into the more traditional 'skein' you see at a yarn shop.

After it's skeined up, then it will need labels and some patterns so folks will know how to use it and some sample things knitted up to go into the shop along with the yarn. The samples are for sale, though, so sales of scarves and shawls helps the level of profit since they're 'value added' by being knit. Original patterns, hand knit and locally made so they sell occasionally. The yarn sells faster than the knit items, though. 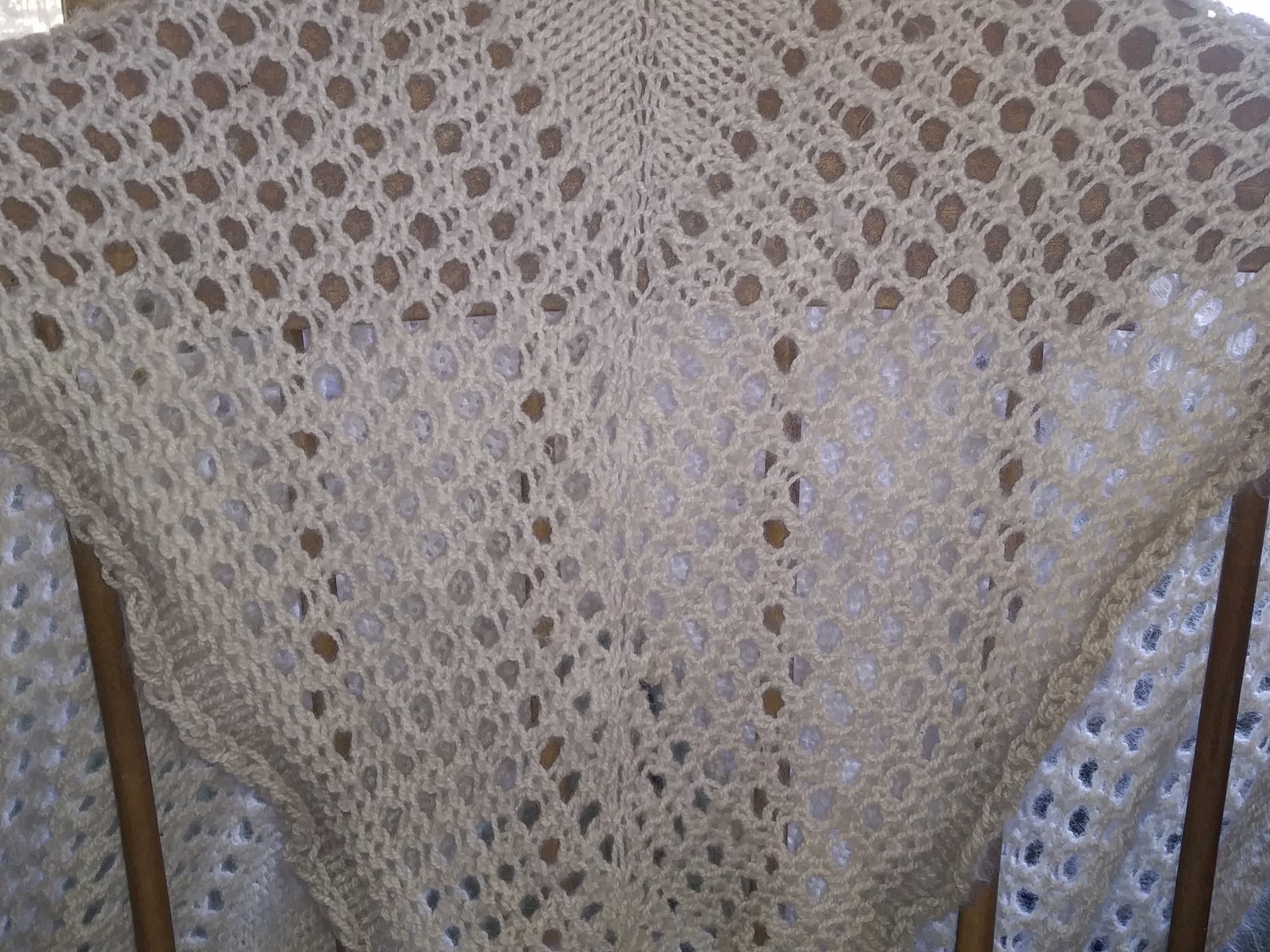 This is a somewhat typical shawl. Big needles, lots of lacy holes so it goes faster. Plus, since it's angora yarn, it's a very warm yarn so lacy is better than a tight pattern.

Guess I'll go count bunnies. Plus I'm sure some of them need hugs. Gotta keep the livestock happy, after all.

I love reading about your Hula Bunnies!

Niele da Kine said:
3 of them moved to Maui yesterday
Click to expand...

That must involve one heck of a delivery charge!!!!
F

Very interesting about the yarn and the bunnies and all that goes into it. The shawl is very pretty.... A very interesting "cottage industry".. Thank you for sharing that with us.

Baymule said:
I love reading about your Hula Bunnies!
Click to expand...

They're friendly little critters, drop by and visit with them next time you're in town. They went to the shop yesterday to visit with the people who bought the shawl. Not all of them went, just three. Vicky, Vanessa and DaffyDill. That way the people could see where all three colors of Hula Bunny yarn comes from.

Bruce said:
That must involve one heck of a delivery charge!!!!
Click to expand...

Nope, just $20 per bunny. Maui is just the next island over and only a forty five minute ride on the little propeller planes. Getting to and from the mainland are the big expensive flights.

farmerjan said:
Very interesting about the yarn and the bunnies and all that goes into it. The shawl is very pretty.... A very interesting "cottage industry".. Thank you for sharing that with us.
Click to expand...

You can cottage industry, too, if you like! The more bunnies the better! A lot of people just keep a bunny or two as a 'wooler' to make yarn. You can start small and work up?

Coffee is ready. Going to have a neighbor boy over this morning to help us clean up around here. Hauled off some trash yesterday. Neighbor Jimmy keeps a big roll off construction box, he has an AC business And told us we can use it. Pre-winter clean up today.
M

I'm working some "pre-winter" now and for next month. It will cool but not usually nasty stuff, weatherwise, for a couple months. Jan & Feb are normally or bad months.

It is a BRISK 55 this morning!! Very breezy, too. Haven't needed AC for almost 2 weeks. This morning it was only 68 in the house.... left windows open a little too much! So, I'm WIDE awake and sucking up this hot coffee -- with long sleeves & jeans to help. Needed jacket outside. Grass is just so wet -- as you walk you have rooster tails of water flying.

Gotta work today, so will change & leave shortly. Should be drier out there when I get home mid afternoon. Hope so. I prefer chores in better conditions. Don't we all?