This is what I dealt with yesterday evening. Gracie, English Shepherd and Farm Dog Extraordinaire, found this for us. This is a Cottonmouth. Sorry I couldn't get any picture of the mouth when he was striking at me....I was kinda busy keeping him off of me, lol! 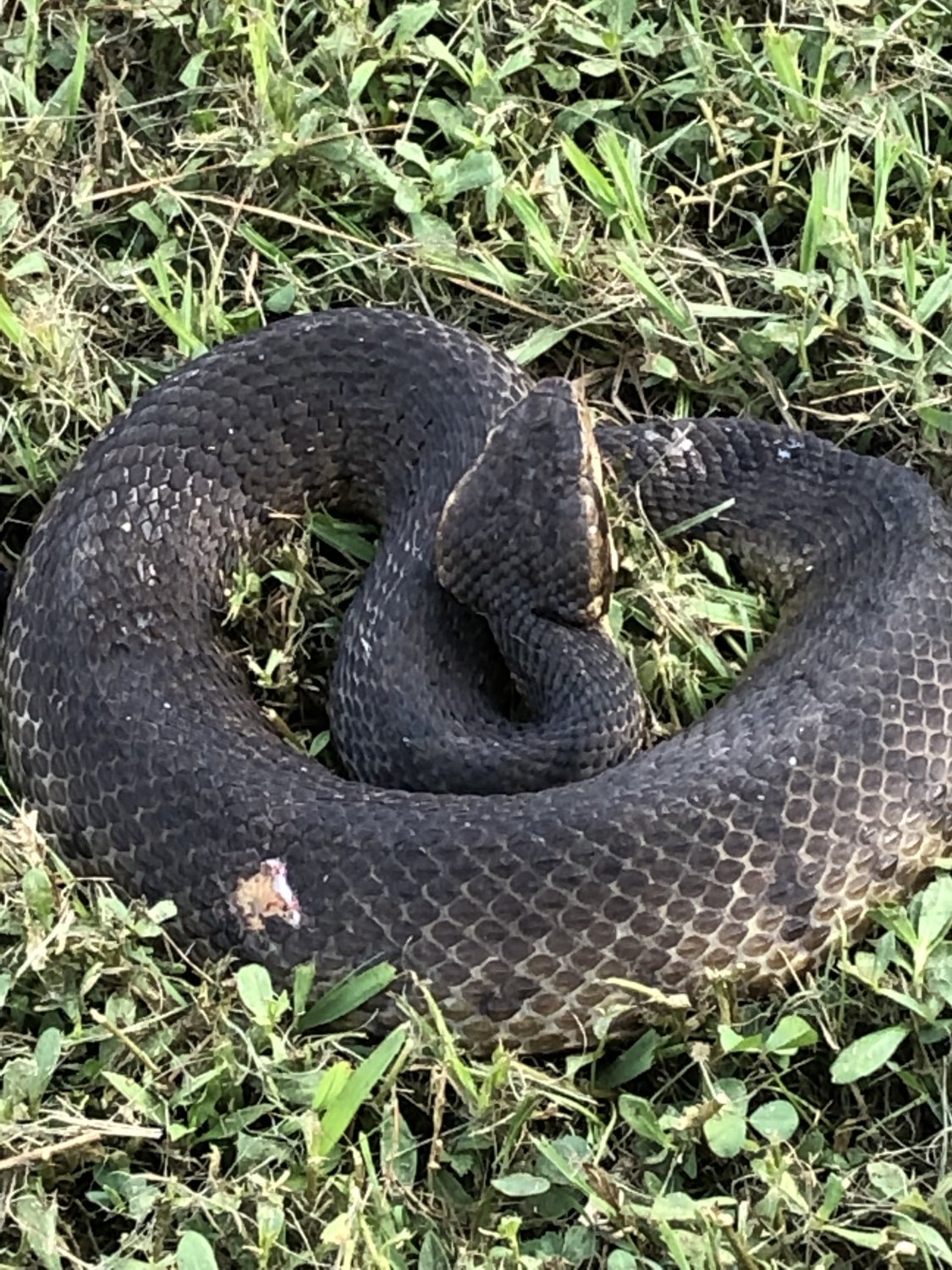 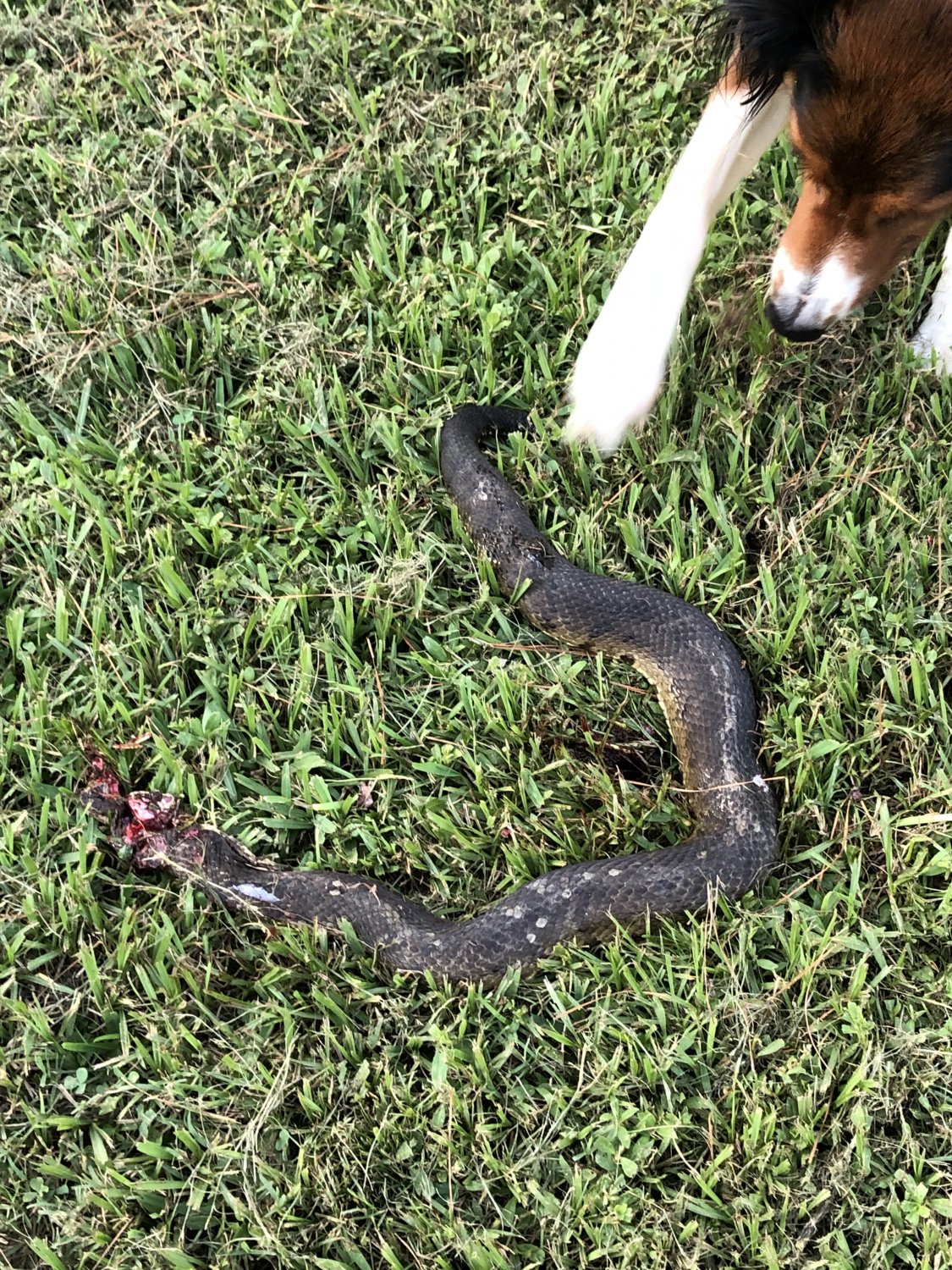 It’s POOP PARTY DAY!!!!
@Ridgetop @Devonviolet and their husbands are coming for lunch and DV is bringing fecal samples from her goats. WHOOP WHOOP!!

AmberLops said:
Be sure to take pictures
Click to expand...

Devonviolet said:
time at the kitchen table, with both mine and Bay's microscopes
Click to expand...

Only farm people would see nothing wrong with this.....

Devonviolet said:
YES!!! That is SO cool, that @Ridgetop brought each of us to a breeding harness! I got a blue crayon.

I'm looking forward to putting it on Danny Boy and getting our girls bred. This will help take the guesswork out of it all. . . Did he??? Didn't he????

RT also brought each of us a jar of homemade apricot jam, which is out of this world! As soon as we got home, I just had to open it and try it. I just LOVE apricots and I wasn't disappointed. It is delicious!

Oh and RT and her DH brought @Baymule and I and our DH's each a cool "Cabelas" baseball cap. DH put his on and left it on 'til we got home and went out to do chores. He exchanged it for his headlamp, because we got a late start and it would be dark before we got back in -- and it was.

Who knew, a Poop Party could be so much fun!!!

Glad y'all had fun! And good boy Carson for being such a good "model".
M

Well, I occasionally have senior moments -- NO anesthesia involved

So, FEM & Devonviolet, you're good!

Another type of "senior moment" -- you know, the "it's good for you" part and I prefer to forget all the other stuff about it. The French & Italians know it's good for you.

Besides, I worked all day and I deserve to relax & enjoy. Doing just that!

It's been raining off & on for last couple of hours Do not need more right now, plenty wet out there!!! This everyday thing is no fun.

Thanks for the coffee! Woke up to the smells of cooked pig wafting through my house. Dry rubbed and sat in the fridge for 12 hours yesterday and cooked low and slow for 10 hours overnight. It will turn into pulled pork later today. Yum! 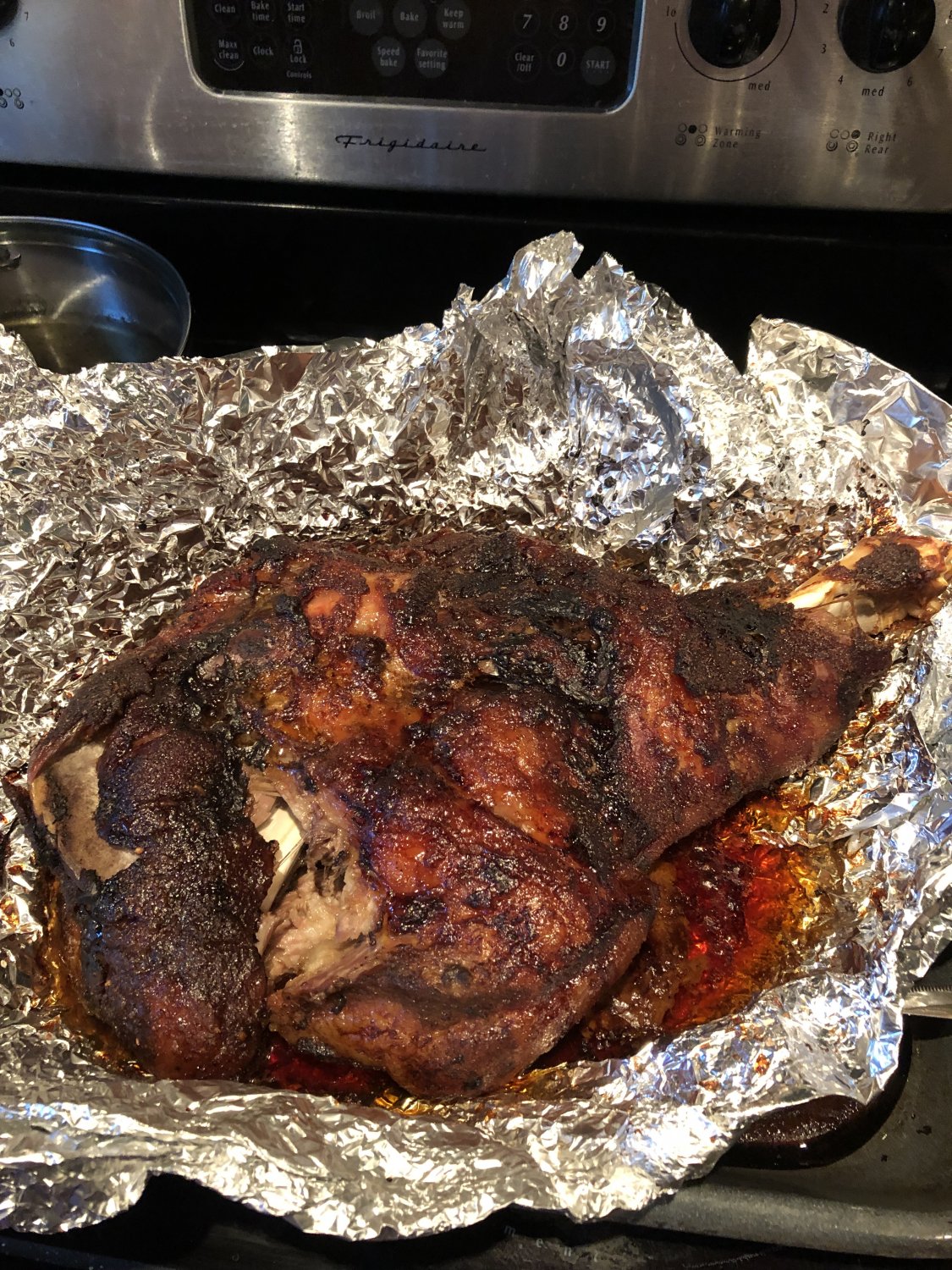 Thanks for coffee! I slept until 7AM. A storm came through around midnight, more rain! We now have 10 lambs from 6 ewes. Happy! Happy! Happy!
M

Baymule said:
I have 84 alerts. Don’t think I’ll get to them tonight.
Click to expand...

I had felt today was butcher roos day -- BUT after waiting almost 3 weeks, the mechanic could/would be able to get my truck in for the new upper control arms/ball joints. So, when I called about 7:30 he said bring at about 9:30. DD was going to meet me and bring me home. Go to start and DEAD battery..

What??? no time. Wouldn't take a jump....call DD and had her pick up a battery and bring to me as she was in town. Get here, can't get the horrid clip off that holds battery in....finally did. New batt in and off to shop, arriving 1 hr later than planned. Mechanic says "don't know if I can be done today, since you're late I started another job". I wasted NO TIME in asking why he hadn't called me AND advised him to tell the other job to wait like I had for almost 3 weeks!!! He advised he'd do best he could to get mine done. I told him he owed me that!! I needed my truck as DD was loaning hers to me and it was now having issues. I HAD to have this done.

DD took me home...in front yard I have 15 goat does grazing.

found & fixed escape hole. Called them & moved back into pasture.

Then, get a WEIRD call from my "mortgage co" saying I was short in my escrow. (NO WAY!!) A man with an extreme accent, lot of background noise, giving me info that you would think ONLY the mortgage co would know. After much repeating (so I could understand him) we get to the part where I needed to pay $868.20 to bring escrow into balance. OK, many questions from me, replies from him. It became "pay by debit card" time. I had been careful to not divulge anything and said I would need to pay this next week after payday...what's your number to call back? He gave me his "direct line". Called and he answered....acted like I had more questions. Hang up. Call mortgage co and after much transferring get a supervisor who cannot confirm this person is associated with them...

Surprise!! Advised they might have a hack going on & gave all info...then reported all to FTC for possible fraud/scam activity.

Then drive tractor to back to pull 4 large logs (tree trunks) from woods for DD; then helped her pickup and transport another pile of cut logs from further down along wood line to her cutting pile, with the tractor. By now, late day.

4:30 mechanic calls...miraculously the truck repairs are done. Have DD take me to pick up. Bill is a good amount less than originally thought. Nice. Go home. Do chores. Leave for town to return old (6 y/o) battery for core charge refund and what do you know...truck doesn't start as I go to leave town!

Thought it was the remote clicker (my theft/alarm system requires it to start engine)….new battery for that. Nope, Took it apart right there! cleaned some crap off the spot to click...still no go. Notice NO LIGHTS...hmmm, new battery. Open hood, cable to ground is loose. Back in auto store...give me something to tighten this. WHAT? Hey, I bought this AM and you did not install, so do so now! Got that cable tightening done, truck started and home. Took new wires for spark plug to coil pack -- that I bought while at auto parts shop -- so we can install, hoping that is the problem on her little truck. If not, plugs are next.

I never planned to be a mechanic but, dammit I will be if this keeps up. Ain't ever had an issue being direct with my words...that's why truck was done -- he'd planned to leave early for a car show this weekend. He could go, just not till I got my truck!!

Some days I am quite assertive. Why did I wait for that long for work? Because this mechanic is good and he is honest. Have used him off and on for many years. Just needs a little "talk" sometimes....if he thinks he can slide you to suit his own life, he may. I wouldn't slide today and he didn't get to leave early for the car show this weekend. Too bad. Drive at night.

Today has been full.

And, yes, I am having a relaxing glass of vino. I have earned it!!!

Interesting what my grow outs look like... these are from the small set of eggs from before the extra males were taken out of the flock... so interesting genetics.

The cockerel in front must be half Spitz... very cool comb. Ended up almost a buttercup comb.

The one in back with the arrow might be male... but is clearly a mutt, so it is getting butchered too. Not sure what cross though... I -think- the only fuzzy faced standard chicken I have are 1 blue Ameraucana, and maybe 3 Leghorn x Ameraucana. Anyway... way too mutt for me to keep, male or female...

Then I have 1 extra dark brown cock... but both are about equal fault wise.... couldn't decide which to get rid off...which is why I have had 2 for so long. . But it is full on Fall/almost winter... so I have to cut back as much as possible... I told the kids to just grab one of those. Luck shall choose.

I do have 1 dark brown cockerel growing up that might be better... too young yet.

I wanted to also cull a few dark brown and a few white leghorn hens... but I refuse to kill the white Leghorn hen that is my best broody...and now that her chicks are grown...I can't tell which she is!