Maybe you should also raise opossums since they also fall over stiff when scared. More meat.

That would be a SERIOUSLY weird looking animal!

Bruce said:
Maybe you should also raise opossums since they also fall over stiff when scared. More meat.
Click to expand...

Y'all are killing me!

@Devonviolet, Did you ever do anything with aquaponics?

HomeOnTheRange said:
@Devonviolet, Did you ever do anything with aquaponics?
Click to expand...

No, with our mid summer temperatures in the 100-115 degree range, we decided it was just too hot to keep the fish alive and with Winter temps down to 10-19 degrees, It seemed like an uphill battle. So, we gave up on that dream.

I just witnessed THE coolest thing!!!

On the weather report this morning, they were saying that the storm that was up in Oklahoma, might come as far south as Paris, Texas. Paris is one hour north of us. So I didn’t think much of it when I noticed the sky was getting dark. But then DH told me the winds seem to be pushing one of our apple trees over. I went out on the front porch to look at it, and this is what I saw in the torrential downpour!!! 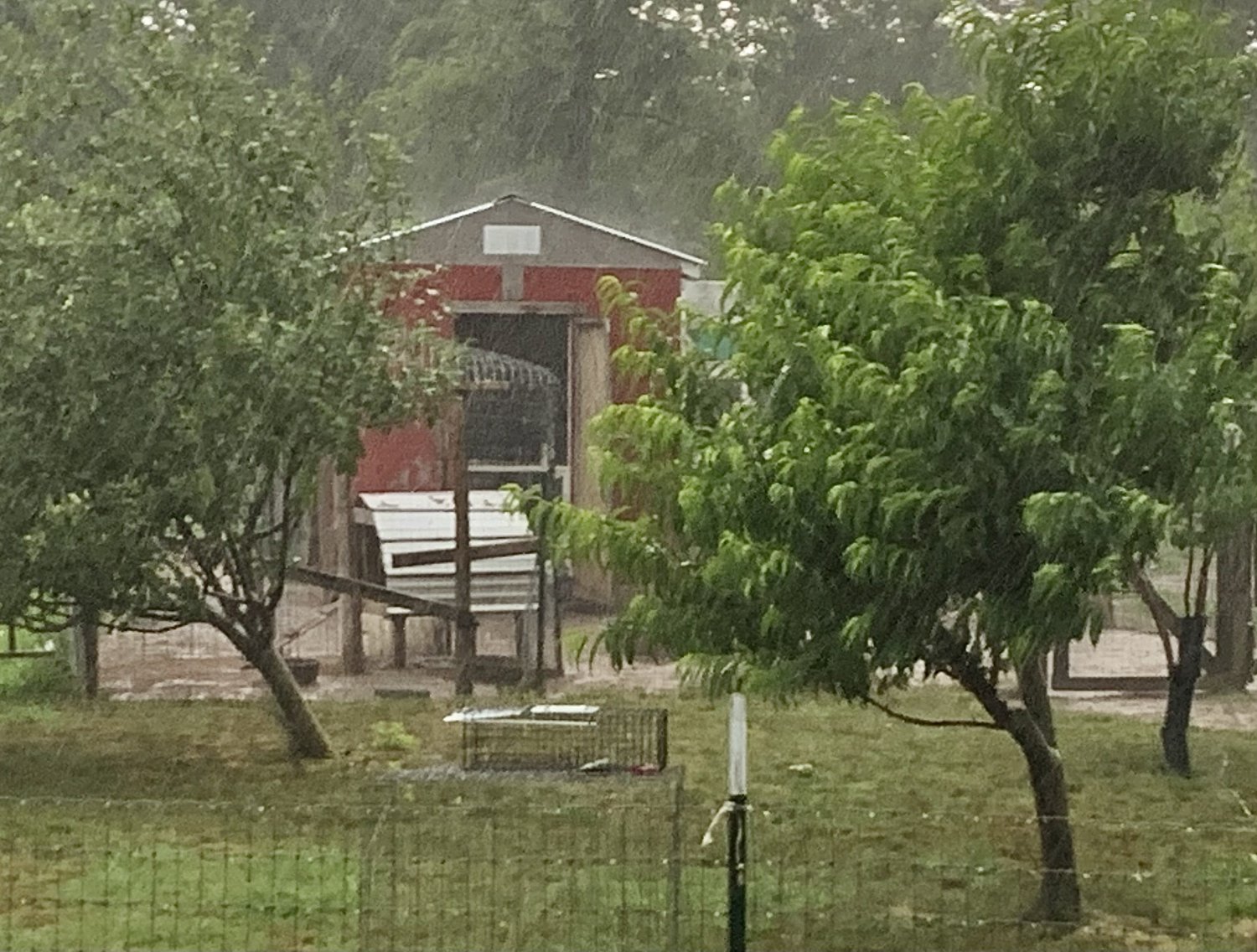 That same thing happened to an apricot tree about four years ago. The tap root broke off about 8” below the soil line. That tree didn’t survive. We will go out later and see if we can pull the tree up vertical again, but I’m not sure this Gala apple tree wiil make it either.

Anyway, when I went outside, I noticed that my one sunflower plant that is getting fairly big, seemed to be blowing over as well. So I went out and tied a rope between two T-posts, to help support it in the wind. 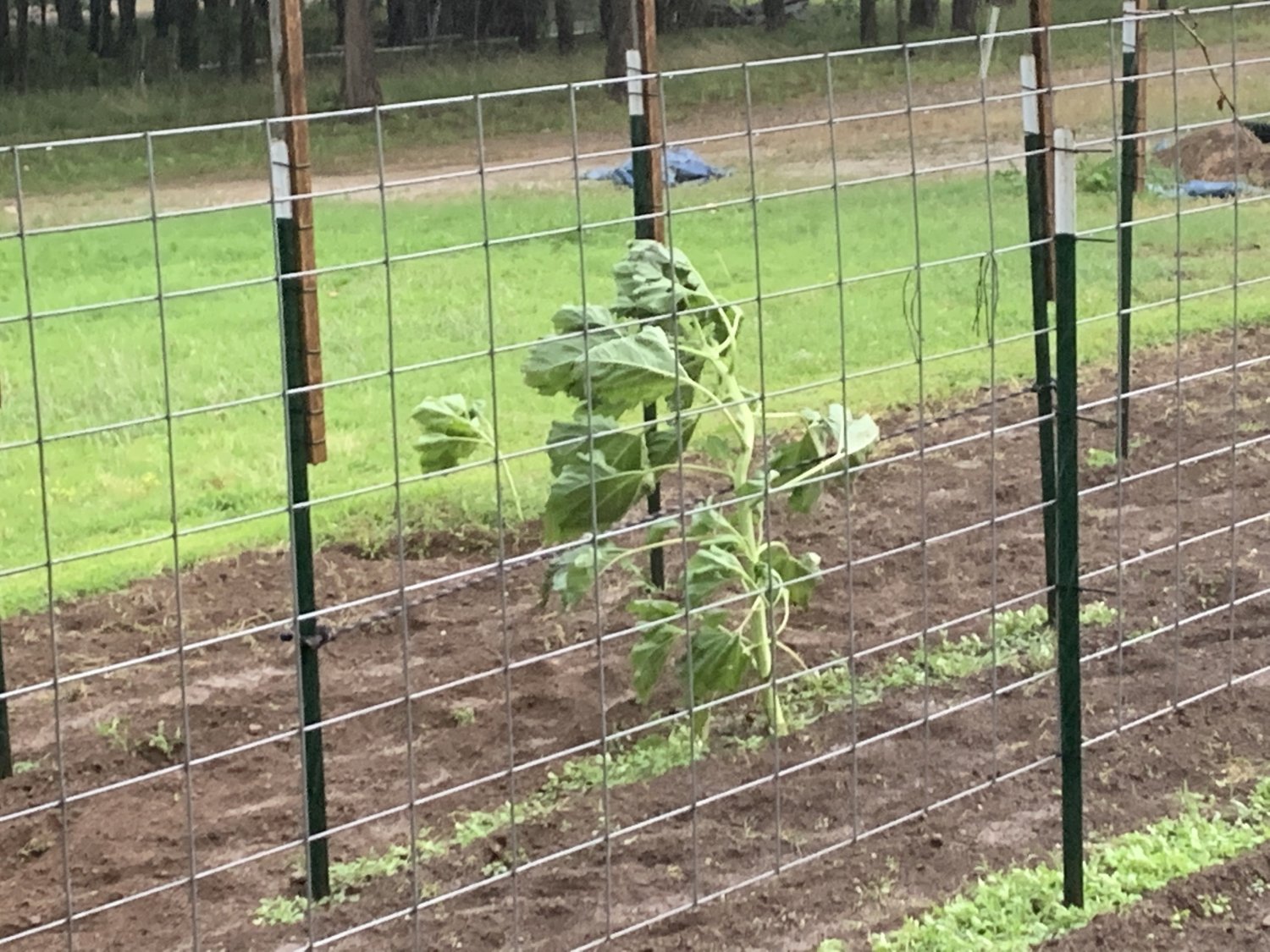 As I finished tying the rope off, I felt some HUGE raindrops, and realized that the dogs were barking like crazy. As I headed in the house I looked toward the goat yard and saw the dogs barking like crazy, herding the goats into the goat shed. They actually realize that it was a bad storm, and were protecting their goats from the storm! They stood outside the goat shed continuing to bark, until I hollered out at them, “Good dogs, good boy, good girl!”. Then they went in the goat shed and laid down. I guess they were happy that I noticed and approved, so they could relax. They are amazing LGDs!!!! I am SOOOO proud of them!!!

Wow! That’s some rain storm! Sunshine down here in Trinity county. I sure hope your apple tree is ok and y’all can straighten it back up!

Awww….. Deo and Violet are on the job! They love their goats! They were showing you what good dogs they are!
Last edited: Jun 6, 2022

Tonight - around 10:30, I heard our two amazing Maremma’s barking like crazy! Since I was already in my pajamas, I asked DH to go check on them.

It turned out there was a rat snake entwined in the fencing that goes from the goat yard into the chicken run. It was caught and couldn’t get out. That means it was headed toward the nest boxes, to eat all our eggs.

At first DH thought it was 5 or 6 feet long. But, once he managed to unwind it from the fencing, and held it up, it was at least 7 feet long! It was the biggest snake we have seen since we moved here 7-1/2 years ago.