Feeding advice, and how to tell if a pig is fat

This is one of the Juliana she pregnant but not over weight. 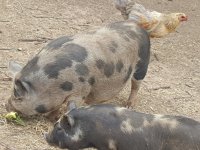 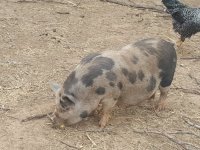 This one kunekune (orange one) young boar. Lo 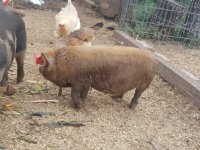 This one a younger j Juliana gilt non of theses are over weight.

Awesome pictures! Thanks, they are very helpful.

Guinea Hogs are lard hogs, so they are bred to get fat. In our experience they tend to grow pretty slowly, though this might have to do with how much we feed them. This year we have had four adults and six babies/half-grown pigs in our pasture together. All are Guinea Hog/Ossabaw mix except one, a Red Wattle (who looks gigantic, though much leaner, next to the others). For ALL of these pigs, we give one five-gallon bucket of feed per day, plus kitchen scraps several days a week. We also usually get some spent brewer's grain 1-2 days a week (we feed two five-gallon buckets at a time), and occasional buckets of farmer's market cast-off produce. Our pigs get hefty looking all around and their jowls are quite fat, but they don't have dragging bellies or an extra fold of fat in the cheek.