...and loving it! Getting back into sheep in a small way and need a place to journal about it all.

Starting again with Katahdins, my fave breed, and will keep a very small herd of one full time ram, a wether and a few ewes until I see what my pasture can support. Won't have the wether until my first lambs, so for now it will be three.

Doing all this on a very low budget, as that's the way I love to live. No fences yet but I live in a unique situation that sort of creates fencing around our meadow for now...surrounded by forest, no near neighbors and none with any livestock for over a mile. One LGD that will not likely bond with the sheep at all until we have lambs...I can see him wanting to nurture those. Right now these two old biddies I bought would rather stomp him into the ground rather than bond. They've never been worked with much by humans and never had a LGD at all..they had a llama.

So, will be working on fences, have put up a temporary penning situation until I can build a permanent sheep barn of sorts. Will likely be a pole shed situation, as we have plenty of trees on the land for use. Only three acres of grass/pasture right now and would like to just keep that much, though we have 20 acres in total here.

Have collected free enormous pallets for use in fencing....six large stacks of them. These have 3x3 and 4x4 framing and are 10-12 ft. in length. Were used to move metal sheeting. Will put these back into the woods to give the sheep plenty of browse along with their pasture...we have a lot of stuff they love to eat in those woods~honeysuckle, multiflora rose, greenbrier, saplings and evergreens of all sorts. Then we'll fence the pasture side of each paddock with regular woven wire sheep fencing with wooden posts harvested here on the land.

Hope to milk these few ewes if possible, just enough for Mom and I to use for making cheese and such. Both ewes have passable udders, nice and even, small but well placed teats...not huge udders but we'll see what the ram can add to the mix~his dam has a huge udder and regularly feeds twins and triplets with ease. Could be I'll be able to breed upwards with him.

These ewes were from a flock someone was getting out of...no longer wanted to do sheep, was switching to horses. Supposedly these sheep were from strains of Katahdins bred by a fellow in OH who worked with OU on the improvement program but eventually got out of sheep altogether.

I picked out the two most likely to succeed, though I still felt like they were a tad small for Katahdins~both short and short bodied. Both had just weaned lambs, both had twins but the elder had also nursed and weaned another bum lamb along with her twins. I liked that and felt she may come in handy, though she's already an old lady in sheep years at 7 yrs of age. The other is 3. 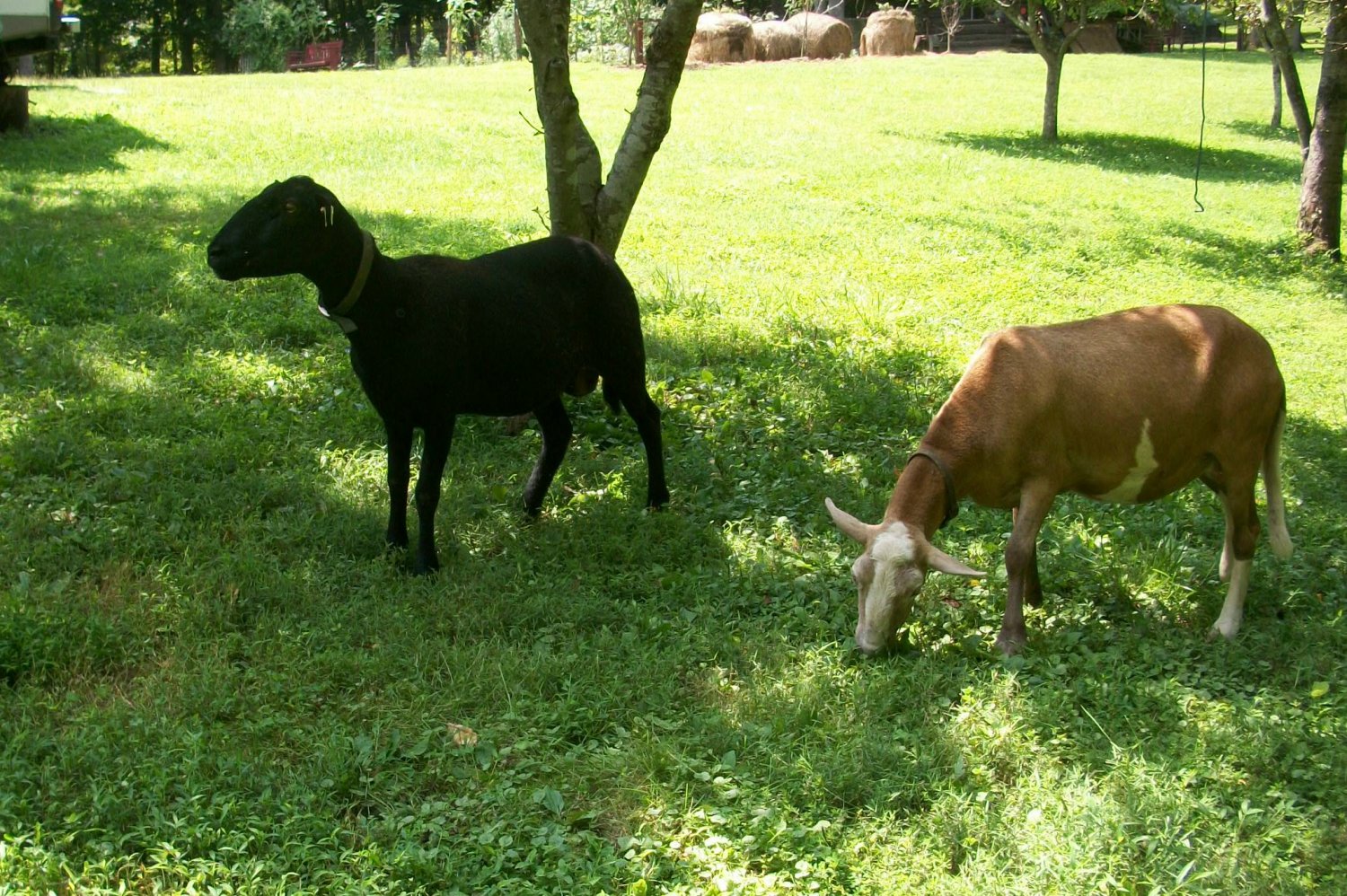 Shine, 3 yrs, is on the left and Rose, 7 yrs, is on the right. They were both about 2-2.5 conditioning upon arrival but are starting to fill out a little on good graze and browse. I should have them where I need them to be by Nov. breeding. 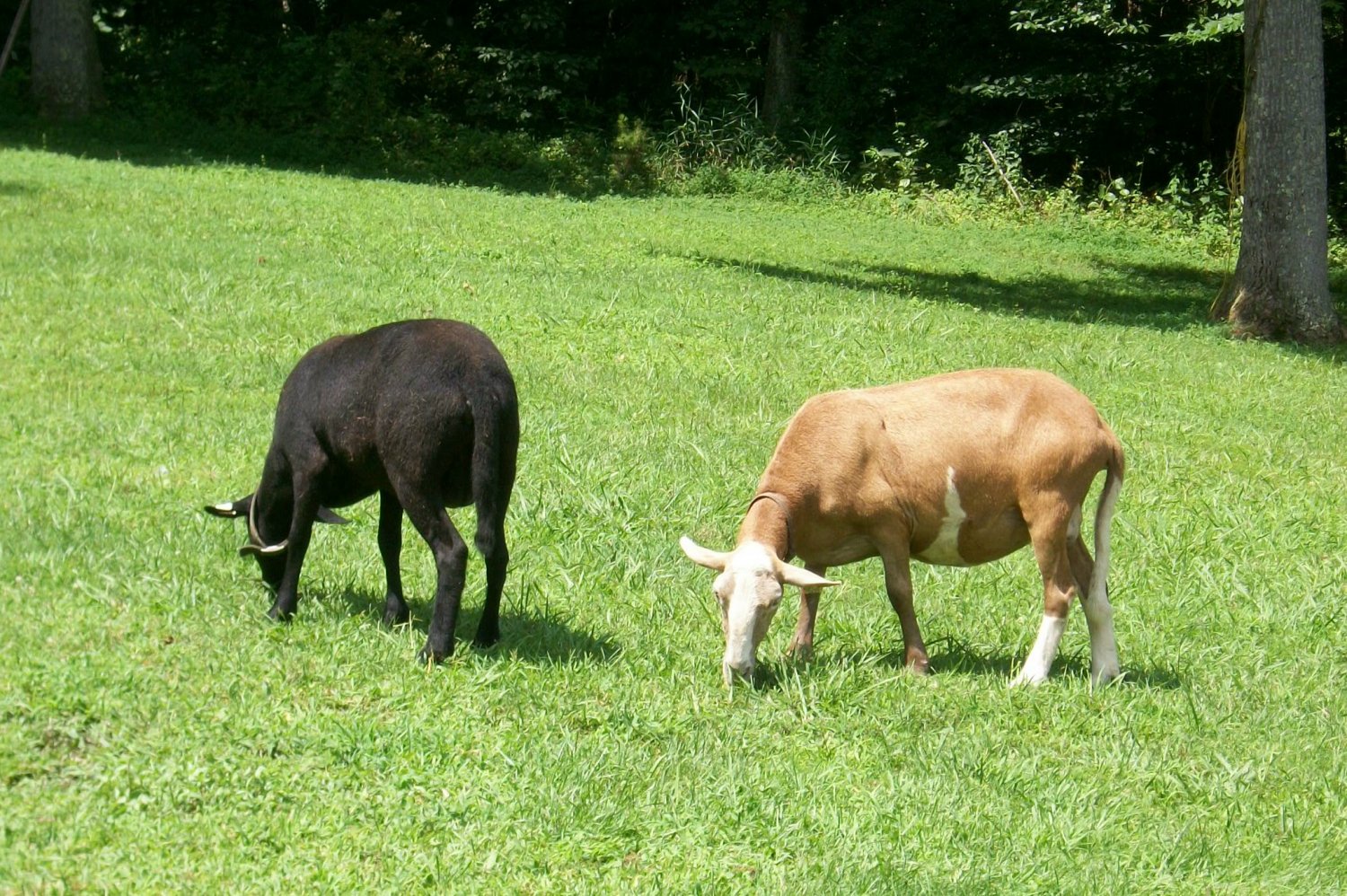 So, will try to record successes and failures here so I can learn as I go. Will only be using grains for training purposes, would really like to keep them on grass based nutrition as much as possible.

Just starting to get the feel of sheep again and remembering how much I love sheep. I hope to get to the place where I can use them for milk, meat and for keeping the meadow mowed, but also for the bond between sheep and shepherd. I really love that part of it.

My grandgirls are loving my having sheep also and I can't wait until spring when they get to experience the lambs.

So far I have square bales of first cut hay but will be getting a couple round bales of second cut here in a week or so. Will set them up on a self feeding style, using cattle panel placed tight against the hay to prevent too much waste.

Experimenting around with some nipple waterers retrofitted to insulated drink coolers so I can keep water cool and fresh in the summer but try to use an aquarium heater in them this winter as a heated waterer...don't know if that will work, but it's worth a shot. Already had the coolers on hand and the fittings are cheap. Since all water has to be carried and comes from a well, I'm interested in better watering solutions than buckets.

I grin every time I hear them "baaa!" at me...it's worth all the hassle of getting started and all just to have another reason to smile in this world.

Bonus....haven't seen a deer in the yard since they arrived. They had been chewing down all my roses and eating our apples, but no more deer problems with the sheep in the yard. Funny, huh?

I guess folks who have deer problems in their gardens just need to get a few sheep.

They look in nice condition.

Good luck with revisiting sheep.....they are lovely animals to have.

Also good luck with breeding them.

Built another gate in the sheep pens today and also situated self feeding hay stacks in both sides of the pen, one for the ram and one for the ewes. The sheep seemed to like the changes.

Will be getting the ram, delivered from MO, on Thursday night. Can't wait!!!

Both sheep got a good brushing down by little girls this weekend and each time they are handled, they seem to do better and better. Hopefully by spring, after being trained to stanchions all winter, they will be more willingly handled for milking. 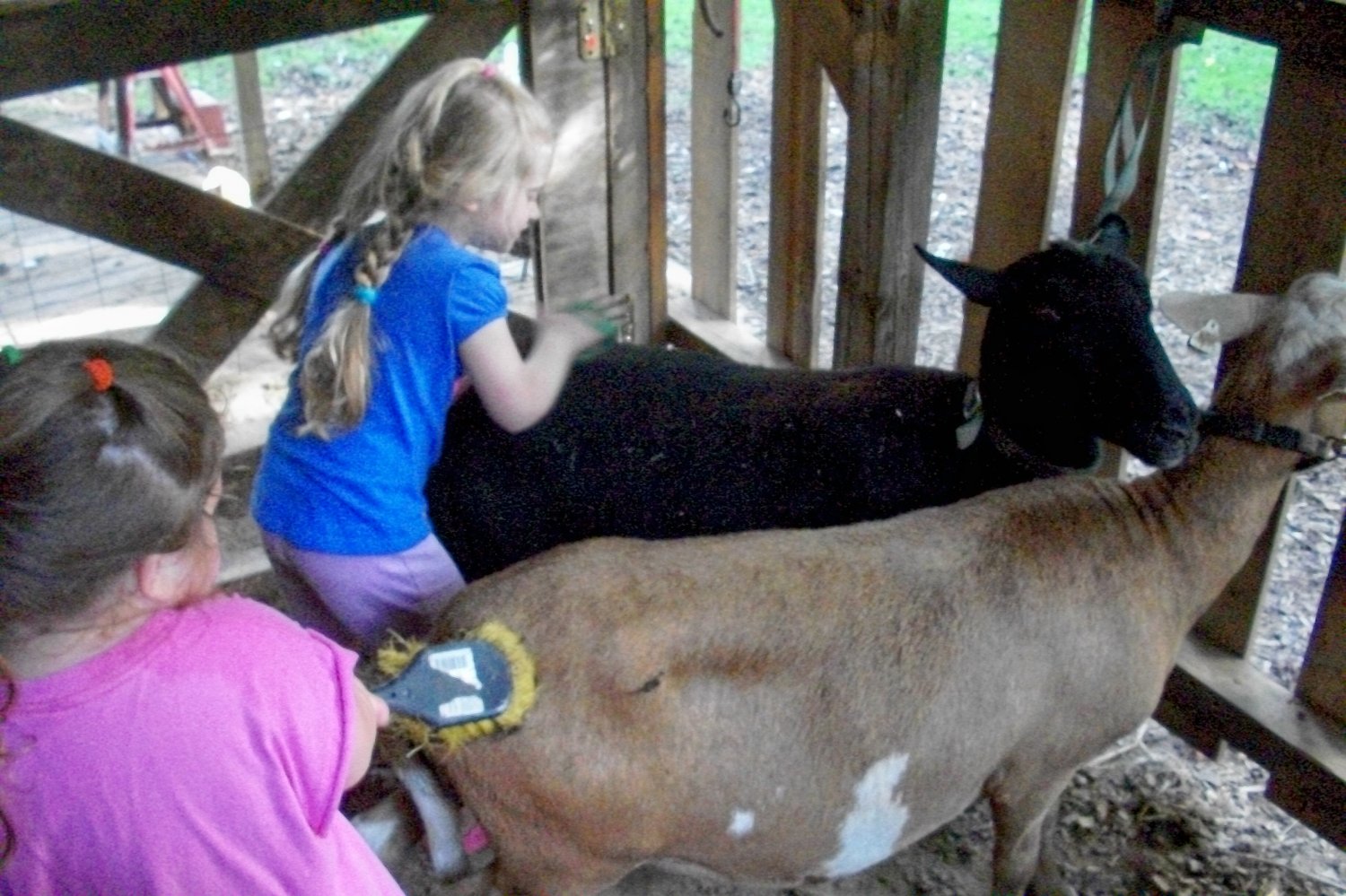 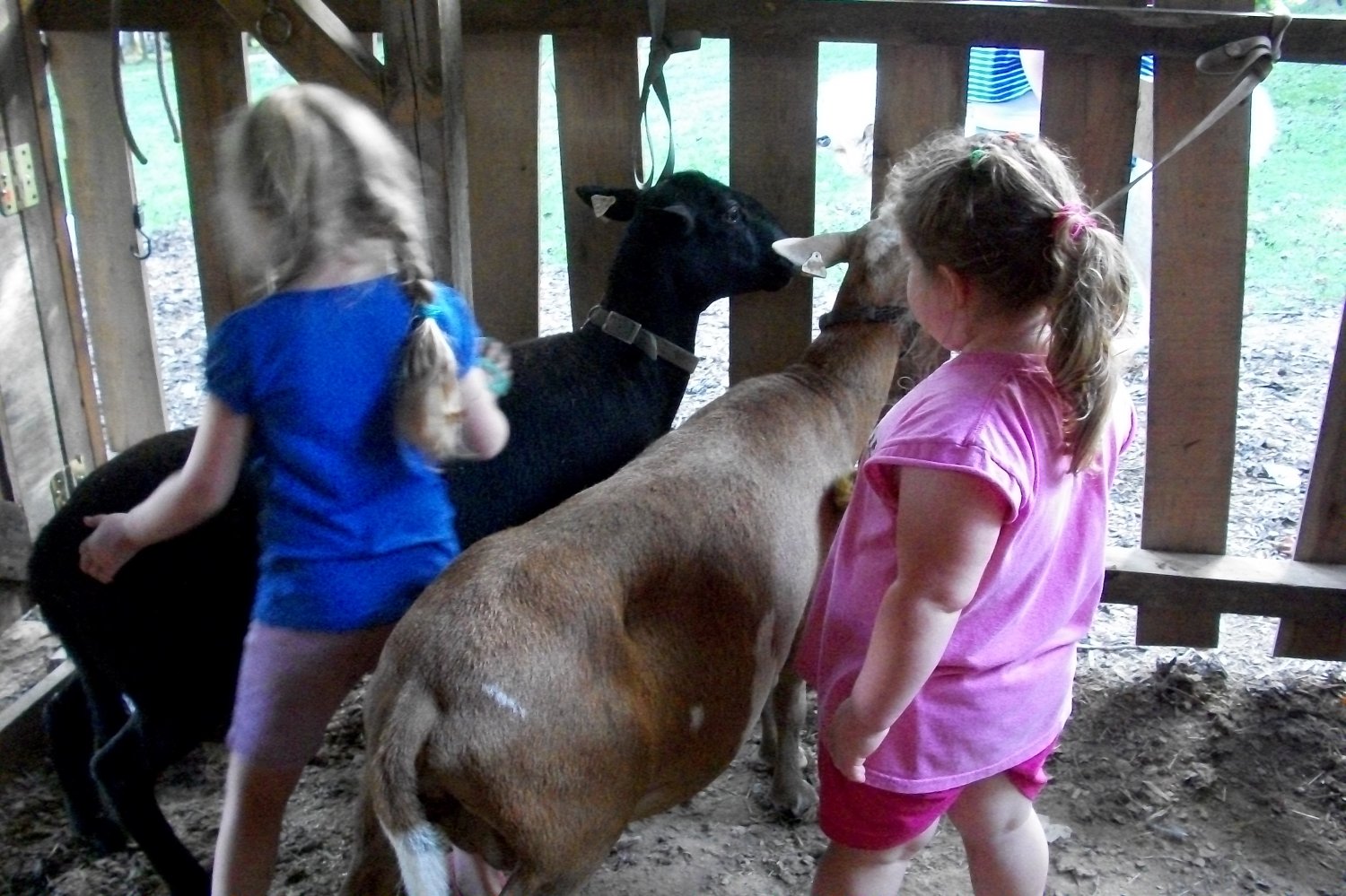 Shine lined up this morning at the back porch with the morning moochers, waiting for the food bringer Don't know why she bothers, as she isn't getting anything but grass and hay. 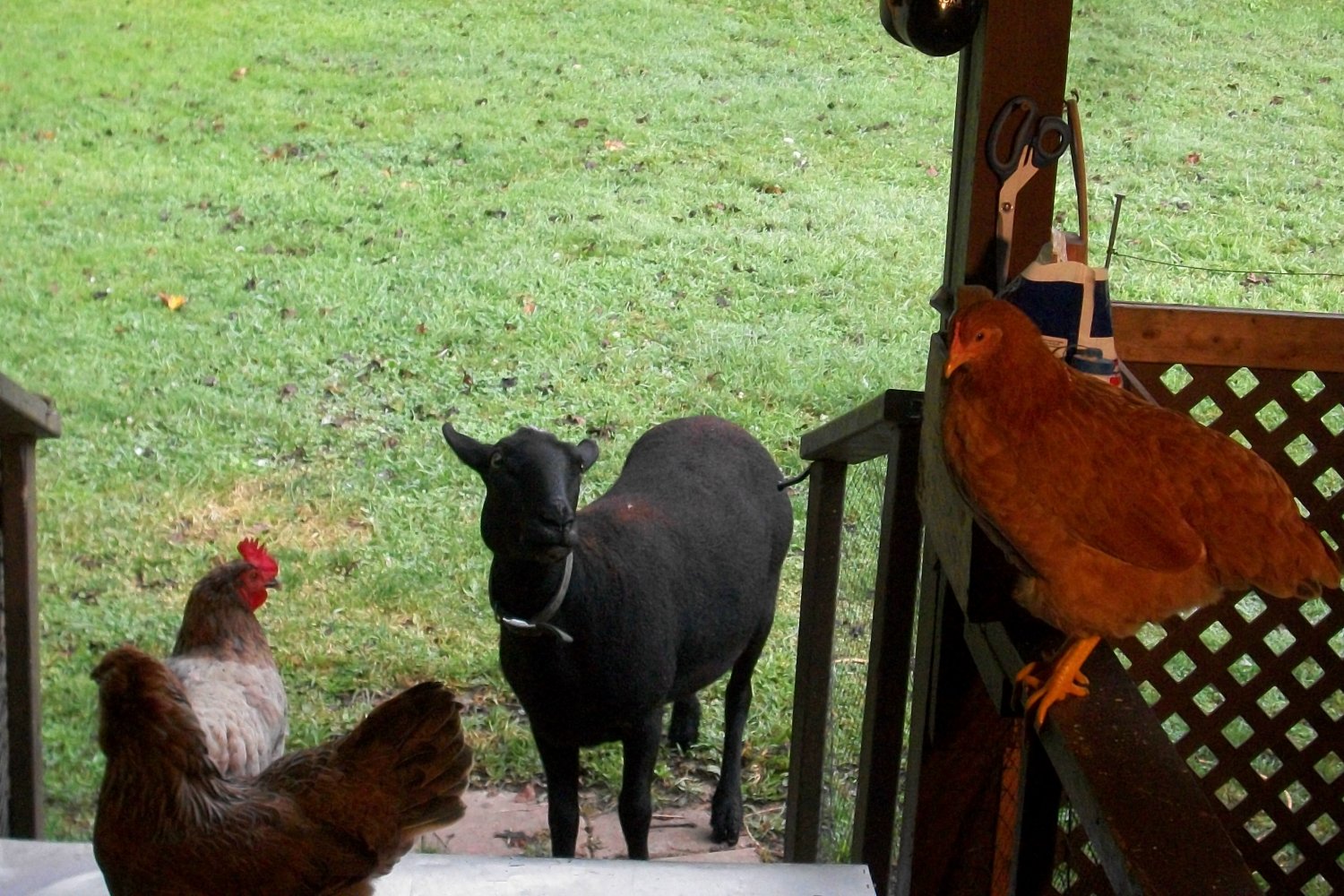 That is so sweet. Those girls will do a lot to calm down the ewes. As you brush the ewes, you could give belly rubs and work your way back to their udders to get them used to being handled. Do they yell when they hear your voice? If I speak one word, even out on the porch, they hear it with sonic ears like a bat, and start yelling for me. LOL

Baymule said:
That is so sweet. Those girls will do a lot to calm down the ewes. As you brush the ewes, you could give belly rubs and work your way back to their udders to get them used to being handled. Do they yell when they hear your voice? If I speak one word, even out on the porch, they hear it with sonic ears like a bat, and start yelling for me. LOL
Click to expand...

Yep, they yell and they yell if they see me leaving the property. Every time we tie them, I handle their udders and back feet...when I get the stanchions in place, I'll slowly train them up with a little feed on standing in the stanchions and eating while I'm feelin' them up.

Then I'll get them used to me sitting behind them while they stand and eat AND while getting felt up. It will be a long process, but I have all winter to get them to that point.

Rose does much better than Shine on the udder touching and will also sometimes stand and get brushed without being tied. When she does that I'll brush her all over and move down to brushing below her belly also. She's a wise old ewe and knows a good thing when she feels it. I give her a peanut butter dog biscuit when she stands and gets brushed without being tied....Shine won't even give one a nibble.

Bay, MMD( from SS) is driving to MO to visit her FIL and will be picking up the ram from Farmfresh and driving him here on her way home to Alabama. Isn't that amazing? And Texas Lisa paid for her gas to do that!

I feel so incredibly blessed!!!

Awww....that is so sweet. God sends his angels in all forms.

Today my heart is filled to overflowing with gratitude!!! The good Lord is always providing for me and loving me in a million ways, but today is a special blessing!

@milkmansdaughter is coming to my homestead!!!!!

Not only that, she comes bearing a gift from afar. @Farmfresh was good enough to sell me her very best lamb ram of the season, get him prepped for interstate travel(a LOT of bother, mind you), and MMD is transporting him here to me in WV, all the way from MO!

What seemed like a light and jesting comment by FF about how she would love to sell me her ram lamb snowballed into @TexasLisa bankrolling the gas for the drive, MMD doing the transport and FF actually selling me her good stock.

I am completely and totally blown away by all this generosity, kindness and love...been walking on air for days now, just thanking God over and over for these wonderful women I know but have never personally met.

God moves in such mysteriously intricate ways in this life to bring His plans together. I praise Him for His ways!

Romans 11:33: "O the depth of the riches both of the wisdom and knowledge of God! how unsearchable are his judgments, and his ways past finding out!"