Niele da Kine said:
Oooh! Build another one! Two spinning wheels are always better than just one! And AFAIK it's impossible to have too many bobbins.

My first lazy kate was a shoebox with knitting needles stuck through it. It wasn't elegant, but it worked. Having a brake band on the bobbins would be a good thing, although I've not built one yet.

While you're building things, don't forget a niddy noddy! Once you get the yarn made, then you'll need something to put it into a skein. Or a swift, that will work, too, but I'd think that a niddy noddy would be easier to build.

Yup, we have angora bunnies around here. http://hillsidefarmhawaii.com I do need to update the 'in the nest box' page as well as the 'available bunnies' page but I'm over here at BYH where it's more fun.

Angora bunnies aren't any more difficult to keep than regular bunnies other than needing three haircuts a year. Although, that's for keeping them as a 'micro-sheep' fiber critter. When keeping them as a 'show' bunny with a long coat, then they need about daily maintenance to keep their coat tidy. The ones here have not only been bred for easy care coats (that's one of the selection criteria when deciding which ones to keep) but they get sheared down to naked every three or four months. By the time the coat is getting long enough to need maintenance, it's about time to shear it all off again.

Perhaps you could try just one angora for the wool to spin? If you select an angora breed other than English, they will have a clean bunny head on a fuzzy body and that will be less bunny coat to maintain. Their fiber is great for spinning into yarn, it makes a light, warm and insanely soft yarn. Not much stretch to pure angora yarn, though. At least for English angora, maybe some of the other breeds have more crimp in the fibers. It makes great shawls and scarves and things that drape. If it's mixed with sheep's wool, then it will have more stretch and cling and be good for sweaters and such.

Since the bunnies are kept in hutches with wire floors, their fiber is clean when it's sheared from them so there's very little prep work necessary to spin angora. I just grab it out of the jar and spin it without prep.
Click to expand...

Thanks for the bunny info! I will have to look at the different Angora breeds in more detail, I know I want a clean faced rabbit. I'm hoping we will get into a property by this winter so I can add Angoras in the spring.

The wool ends up a lighter color than the rabbit would be with normal fur, right? Do you have a recommendation or favorite color?

Larsen Poultry Ranch said:
Still haven't had time to examine footman or install replacement parts. Hopefully tomorrow. I did try to prep some wool as I watched TV. Worked ok, but I think I need gloves. I'm using dog brushes to open the wool and help remove the VM but I kept whacking my hand with the brush. It was sore and rough feeling the next day.

I'm wondering if I need to soak my wool again, if not all the lanolin came off and that's what's causing the smell? I ordered some small bits of wool roving and they arrived looking clean and soft. My wool looks yellowish in comparison.
Click to expand...

Get a piece of thick cloth (denim works well) to put on your knee. Hold the locks on this and flick them open against the fabric. You may save your fingers a bit that way.

If you washed your wool in hot water, but then let it cool off too much, the lanolin could have settled back into the wool causing that yellowish color. Or you could have wool that is more of a cream/off white color naturally.

The yellow should wash out (if it’s a grease issue) when you wash your yarn. You could always dye it if it doesn’t.

You might run into problems if you attempt to wash the wool again.

purplequeenvt said:
Get a piece of thick cloth (denim works well) to put on your knee. Hold the locks on this and flick them open against the fabric. You may save your fingers a bit that way.

If you washed your wool in hot water, but then let it cool off too much, the lanolin could have settled back into the wool causing that yellowish color. Or you could have wool that is more of a cream/off white color naturally.

The yellow should wash out (if it’s a grease issue) when you wash your yarn. You could always dye it if it doesn’t.

I bet my water wasn't hot enough to get most of the landolin out and I probably let it cool too much as well. I'll check to see if it still feels greasy or not, I was thinking of dyeing it anyway so I might just do a rinse and hot water and then dye it and then try to spin.

Still haven't had time to try spinning again. I tried when I installed the replacement parts and I think I was having tension issues as the leader refused to be drawn onto the bobbin.

Sunday I went into the room where the spinning wheel is located and found the drive band hanging loose. THE DANG CAT CHEWED THROUGH THE DRIVE BAND!! I'm so mad at her. I couldn't even find all the pieces, so now I'm slightly worried she swallowed some. Hopefully they will pass if she did. Now I have to redo the drive band. I think I'm going to create a cover, or figure out how to hang the wheel from the ceiling out of reach of pesky cats.

Most of the angora rabbit breeds are more or less clean faced. The English has the most 'face furnishings' and is the smallest of the main angora breeds. I think some folks are trying to breed dwarf angoras or some such, but for fiber, a dwarf may not be the best option.

The Satin has a lovely sheen to it's fiber, although it feels a bit coarser than the English. It produces less fiber per year, too, I think. The French has a huge 'halo' with it's finished yarn because of the larger quantity of guard hairs in the coat, I think. I don't have any French or Satin and have only met one poor example of a Satin so my experience with them is limited. Hopefully there will be someone with some French or Satins who can chime in with more info.

I've had some German fiber and it was also a bit coarser than the English, but that's to be expected. I've not met a Giant or seen any of their fiber so can't compare. There's also some other commercial breeds such as the Chinese angoras which we don't see very many of in my area. Actually, we see very few angoras of any type, but this is Hawaii, it's not exactly a rabbit mecca.

Each breed will produce a different quantity as well as quality of fiber. If you could get some samples of fiber to play with before selecting your breed of bunny, that may help you decide which one you prefer.

There are also variations within each breed. I've been breeding mine for silky soft wool that is low maintenance. They're getting more of the low maintenance than the silky, but it's still getting there.

There has been an ongoing experiment here with hybrid angora crosses (this is an island, I needed some different genetics to keep the herd from being inbred and didn't have any English at the time). So far it hasn't improved the English at all so I'm phasing them out entirely. First generation cross between a hybrid Satin/German with a pure English was all clean faced rabbits and the wool seemed improved from the Satin/German but not as soft as the English. There were also some body type issues since the German/Satin are cylindrical and the English is half dome body shapes.

I now have some 3/4ths English, 1/8th German & 1/8th Satin who have some okay fiber on them. Not quite as soft as the English, nice crimp, though. The next generation of 7/8ths English, 1/16th Satin & 1/16th German have been a disaster as far as coat maintenance goes. The coats are getting back towards the English softness, but they mat up a LOT more than a pure English. I'm guessing the coat structure doesn't have the same percentages of wool/guard hair, but in any case, I'm phasing out all hybrids and going back to pure English. I'll keep a few of the 3/4ths English does, but they won't be bred.

As for favorite color, I'm kinda partial to the blacks since it's easy to tell when their coat is ready for harvest. They start out black and when their coat gets long, it has faded to a light silvery gray since there's only so much color for each hair and it gets diluted as the wool gets longer. For a first rabbit, it may be easier for you to see the different coats if you had a colored bunny.

If you like to dye the fiber, then a white bunny would have some lovely fiber for dyeing. The white bunnies are harder to keep clean and the white coat shows any kind of dirt.

Currently, of the litters just born, there's a pair of tortoiseshells which are showing some really nice dense color, so I may keep them even though I don't really need more tortoiseshell in the herd. 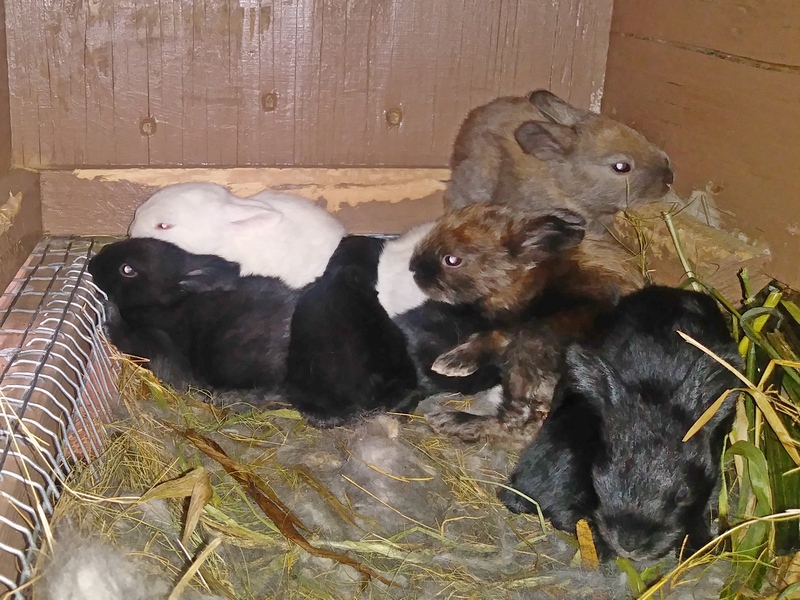 The one tortoiseshell up in the corner is a more 'normal' color, the one in front is the one I'll probably keep. It seems to have a denser color as well as be fluffier already. The sire of this litter has produced a few offspring who seem to have an 'extra fluffy' gene, so those are the ones I'm keeping. One of the blacks may also have the 'extra fluffy' gene as well.

This is one of his offspring, DaffyDill, from an earlier litter. Daffy is now a herd buck so hopefully soon all the babies in the litters will be extra fluffy. He hasn't been groomed in the picture so he doesn't look very puffy, but when he's combed out he looks like a round ball of fluff. 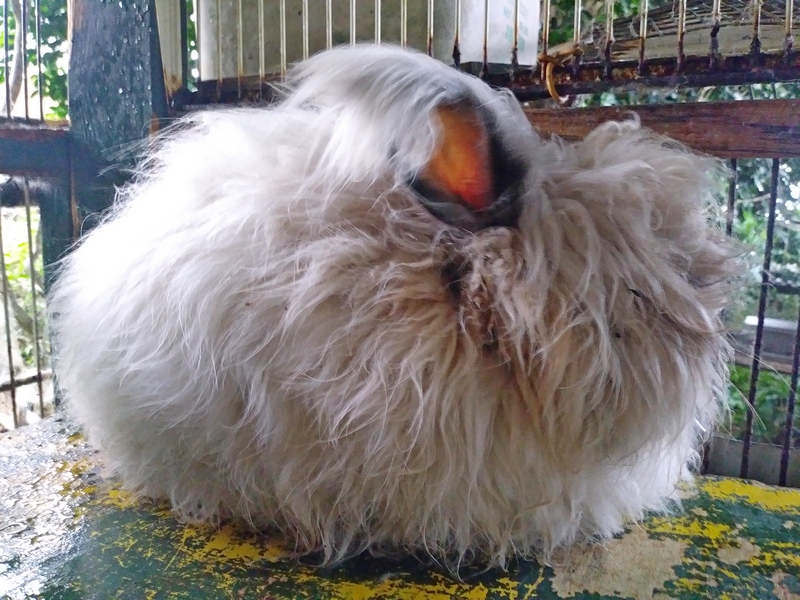 When you have bunnies, you'll be able to breed them for whatever characteristics you prefer, too.
Last edited: Oct 5, 2020

I love reading about your rabbits, thanks for the pictures! 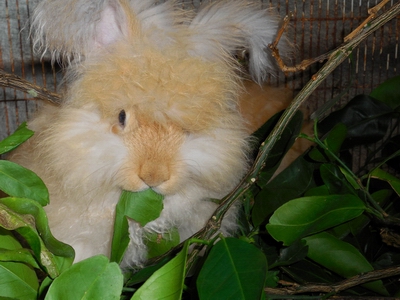