First freshener with triplets, how do I know if she has enough milk?

Hi
I have two Nigerian Dwarf does that are first fresheners this year. They're both two years old. The first kidded on Sunday night. Everything went smoothly and quickly, and she had triplets! One of the three is quite large and the other two are pretty tiny. They seem healthy. The big one is quite a bit more active and seems older than the other two, but the others are doing just fine as well and are starting to play now too. My question is, I'm concerned about the doe's milk supply. She had a huge udder before she kidded, and the kids only nursed from one side for the first day. We milked out the other side as it was too engorged for the kids to nurse. As soon as we softened it, they started nursing from both sides and have been nursing evenly since. Her bag is MUCH smaller now though. Often I see the kids latch on for a few seconds and then wander off, maybe as if they didn't get much milk. We haven't tried milking the doe yet. Our plan was to separate the kids at night and milk in the mornings after about 2-4 weeks, but at this point I'm not sure she's even going to make enough to feed the kids. How do you tell if she's making enough milk for them? They're not screaming or anything, they are mostly sleeping a lot and nursing and playing intermittently. Maybe I'm worried for nothing, but I'm new at this and wish I was more confident in her supply! Any tips would be appreciated! Thanks!

Congrats on the triplets and welcome from Ohio!

Sounds like they are doing fine - my lambs often only nurse for a few seconds at a time, especially at first. I don't know about the milking, though, so I'll let a goat person chime in on that.

We'd love to see some pictures! When is your other goat due?

If the babies tails are wiggling while they are nursing, they are getting the milk. In 2-4 weeks I'd say go ahead a milk her. They have a way of holding milk back for the kids, but I would only milk her once a day. Any questions just ask !!!!

Thank you! I think I'm just worrying like a first time mom. They're so small and fragile right now but they do seem healthy and mom is very healthy so they'll probably be just fine.

Our other doe is due in about two weeks. Based on her xray, we're expecting a single but it was taken pretty early so we could've missed one.

I'll upload a few pics this afternoon when I get home from work. It's not working from my phone. They're pretty adorable!

Oh, also, I did notice that the mom's bag was quite a bit more full this morning. I think I just caught her at the end of the day yesterday when the kids had sucked her dry! Their tails definitely are wiggling the whole time.

and Congrats on the new arrivals

Thanks all. Here are a few photos. This was from day 1, they're a little sturdier looking now. The reddish and white one lying down is the buckling. The other two are doelings. We're probably selling the doelings to my father in law, and keeping the buckling (we will wether him) as a companion for our buck. 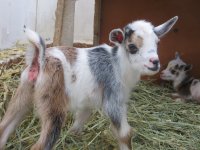 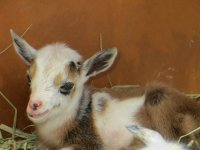 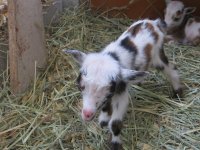 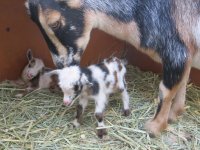 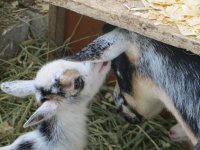 Thanks! Yeah I was pretty happy with how they all turned out. I'll attach photos of the buck and doe as well. Our other doe is much lighter colored, kind of cream/tan and white, so it'll be interesting to see what her kid(s) look like.

They ALL look great! The babies are so adorable! Unless the kids are crying for food I wouldn't worry about it much. Most dairy goats can feed triplets with no issues.

You should put this pic up for Picture of the Week! Such a pretty pic!