For those who show goats...

I have noticed, after jumping through forums a bit, that there aren't a lot of new/recent posts about people showing animals. So, I decided to create this thread for new members like me who would appreciate receiving new knowledge about goat shows. So feel free to posts pics, talk about which shows you've been too, and of course, talk about your goats.

This is my second year showing Angora goats, and my first year showing an angora buck. Last year I caught and the San Antonio calf scramble and received $1,000 certificate. With that, I purchased 2 Angora Nanny's for show and I showed both of them at three shows last yea. I was also given a boer weather doe during the middle of show season. I showed her at two prospect shows and at the next county show, which was her last show. About 3 weeks ago I traded one of my angora nannies for a buck, and I will be breeding them the beginning of September. I plan on showing them for sure at bandera and San Antonio this year.

So we have my nanny Dolly.

And my buck George. 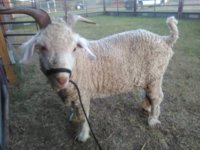 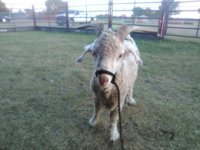 I look forward to reading everyone else's experiences.

Very cool!
Can you tell more about the showing of Angoras?

Dairy goats have a scorecard.
M

May I suggest you change the title? First more response -- next I see "showers" next to "goat" and rarely will they...

We do have several on the forum who show goats, dairy. But since they are involved I would think they have some input.

I'd love to hear more.
A

Mini Horses said:
May I suggest you change the title? First more response -- next I see "showers" next to "goat" and rarely will they...

We do have several on the forum who show goats, dairy. But since they are involved I would think they have some input.

I can change everything but the title on that first post

Anyways, lol, yes, the angoras are said to be judged on hair by 75% and body by 25%, but in reality its more like 95% and 5%. Their hair is judged on how oily it's is, the luster of it, the quality and quantity of it. As far as I can tell, their body is judged by how big, square and level it is. Their horns are also judged, nannies with billy like horns are unfavorable. A nanny with horns like dolly, helmet shaped, are more desired. And when showing billies, if their scrotum is split, they may also be placed lower. To prepare an angora for show, you have to split their locks of hair, a very time consuming action. And last year, I really didn't know how to do this until my last show at San Antonio where the three days prior to it, I spent two hours a day after school working on Dolly, and once at San Antonio I worked on her for 12+ hours straight, only to get her left ribs and her spine done. I then placed 12 the following day out of 25 in the youth show. To say the least, I was elated with Dolly. I bought her for 550 at auction. When I traded my other nanny Lacey, for George, I got all 3 from the same breeder, he was very honest with me and said as I was loading up George, that if he had him 2 yrs ago and had taken him to auction, he would've gone for at least a grand. Before he was shaved, he had so much hair on him, you couldn't even see his hooves, like it was just a ridiculous amount of hair lol

Very cool. I found this. http://www.aagba.org/AAGBABreedStandard_110630.pdf

Why do you split the locks and how do yoy do it?

BTW at the top you can see a little box where it says Thread tools... it will drop down as you hover over it. You can change the title that way.

I clipped down several Angoras and loved the feel of those soft ringlets.

You split the locks to prevent matting and to make the hair a little longer. The way I do it is by sectioning off an area with hair clips, and working my way downwards, and then tucking the split hair back up into the clips.
A

As you're also working the hair, it pulls out any old and dead hair and makes room for new hair. So when you shave the goat, it might give 7 lbs in worked, but welhen you work it, you can get about 8 or so...
A

(I also got a couple pics of George being cute lol) 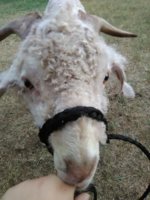 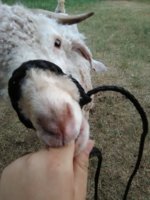