Hey there BYH- I need a bit of help identifying what fruit this is. My husband's grandfather planted this tree along with a pear tree many years ago, and assumes it is some form of pear. I looked up different varieties, and it has texture like an Asian Pear, but is very small. There are so many of these small fruits that will go to waste soon if I cannot figure out what they are, and what I can do with them. If it is in fact some sort of pear, would it be suitable for canning? Any ideas?

Thank you for your help and time! 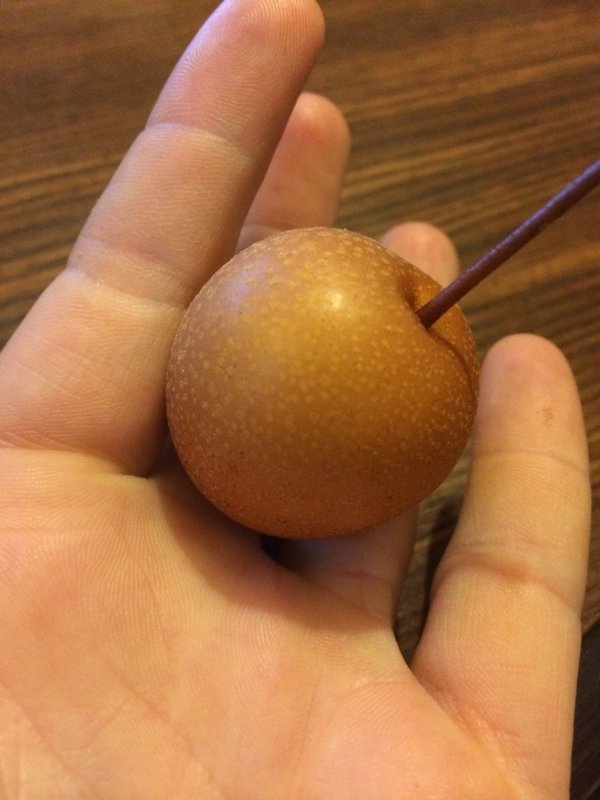 If no one identified it, perhaps a picture of the tree, bark, leaves and the fruit cut in half to see see the seeds or pit may help

Do they taste good?

I believe it is an un-edible "ornamental" pear from what I finally managed to dig up. I will cut one open and also take photos of the tree shortly.

I agree; that looks a lot like the fruit of a Bradford pear. I understand that they were once used as root stock for some edible cultivars; I suppose it might be possible that the original graft died, and the root stock then grew.

It's rather funny - the Bradford pear is now a popular ornamental tree (personally, I hate them with a purple passion!!), but they in turn are grafted onto root stock of yet another tree . . .

@Bunnylady - You have a good point, as far as the root stock theory to it. I will post some more photos later of the tree and the fruit as I mentioned. But it looks alot like this tree in the link below:
http://lh2treeid.blogspot.com/2010/03/pyrus-calleryana-ornamental-pear.html

Before you cut it down, think about if the other pear tree needs a pollinator. Often a fruit tree won't bear very well all on it's own. In the meantime, plant another pear tree!

I would think it is indeed some variety of ornamental, probably Bradford. Bradfords don't really bear edible fruit and won't unless they themselves are pollinated by an outside source. Bradfords were designed to be 100% sterile, and only bear flowers but they didn't stay that way for long--they've been 'bastardized' to produce little pear looking nubs. Invasive in some places and right after the glorious flowering, an undesirable stench, not unlike rotting flesh or dead fish will arise from the area around the Bradford. Bradford is known as "the most over planted tree in America".
Yes, as a member of the Callery pear family, they will act as a pollinator to other Callery trees.

"Bradford" is the name of one very popular cultivar of the callery pear. The name has become almost synonymous with the species in the minds of a lot of people, but there are other cultivars, and plenty of unnamed plants as well. I daresay the fruit can vary with the variety.
You must log in or register to reply here.
Share:
Reddit Pinterest Tumblr WhatsApp Email Link