So I was attempting to figure out what I could of some of my rabbits' color genetics. I have a chinchilla sire that produced REW, Himalayan, Chocolate, Chinchilla, Blue, and Squirrel, if I'm reading the colors correctly. 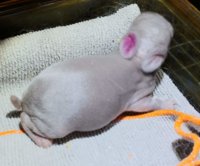 Think this is squirrel. (Blue with a pink belly.) 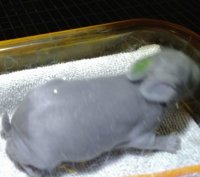 Think this is blue. (Solid blue.) 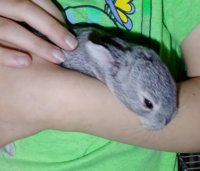 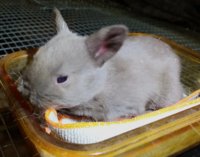 Assuming I have read the kit colors correctly, I think I can know that he is AaBbc(chd)cDd. Did I get that right?

What is the dam of these kits?
Baby colors change quite a bit. Looks like the squirrel and chocolate are shaded, probably sable points and the blue actually a shaded blue or siamese sable.

I agree with @promiseacres and @AmberLops ; your "Chocolate" looks like a Siamese Sable. I know lighting can do weird things in pictures, but your "Squirrel" looks brownish in the pic you posted; makes me think it's a Sable Agouti or possibly a Smoke Pearl Agouti.

Nothing I see makes me think that you are dealing with the chocolate gene, other than that, you are probably right about your buck's genetics.
Last edited: May 23, 2019

This sire mated with 5 different dams. 2 were REW and 3 were Himalayan. REW #1 has 7 REW(+1 stillborn). REW #2 was my bad mom who messed up her nest. She had 7, 5 of which were various colors other than white, but being new at this I didn't try to figure out what the other colors were on day old kits. Himalayan #1 lost her kits (2 probably REW or Himalayan) because I marked her date wrong and hadn't given her her nest box yet. Himalayan #2 has 3 that look REW, 1 that looks Himalayan, the Chinchilla and the one I called Chocolate. I guess all I really meant with that one is that I thought it looked brown bb. So many different names are used for colors. It's hard to keep track of it all. In order for me to have sable wouldn't that have to mean that my Chinchilla is c(chl) vs c(chd). Doesn't he have to have c as his hidden gene since he has REW offspring? The one that is Chinchilla looked black before its fur grew in and the brown one always looked brown. Not sure if that information helps. Himalayan #3 has the two that I guessed at Squirrel and Blue. She had a 3rd that was stillborn that also looked grey in color. At a later point I can try to re-photo them somewhere with better light and a white background. I just did these quick in our outbuilding where they're housed with a flashlight for extra light because the lighting isn't very bright in there. It might be a few days as it has been kind of rainy, and it's crazy with end of school year activities for my kids right now.

You are right; if this buck has given you REW's and Himi's when bred to REW and Himi does, he must have a REW gene. But here's my problem with the one you have called a Chocolate - I have handled lots of Chocolate (bb) kits, of several different breeds, and they don't have ears and face that appeared darker than the top of the head and the body. The only rabbits I have ever dealt with that looked like that (and there have been dozens of 'em) have been cchl. I've handled a bunch of "whoops" chocolate combinations (non-showable colors, like Cinnamon and Chocolate Squirrel), and quite a few Self Chins, but I don't know that I've ever seen a Chocolate Self Chin (which is the only other possibility, isn't it?) in person. There again, I don't think it would look shaded; I have seen a few Sable Agoutis that some folks thought were Chins, but they generally are several shades darker on the "points" than on the body (at least as adults). But, as @promiseacres said, baby colors can be weird; some that were real head-scratchers as babies turn out to be perfectly ordinary colors as adults.

I had an appointment that went shorter than expected and had a few minutes to try to snap a few photos in slightly better light. Hope these are helpful. Also, I mark their left ear so be mindful of inaccurate colors there.

The one that I'm pretty sure is Himalayan. Also has slight tint on toes and tail, but too difficult for me to attempt to photo.

Looking at them in that lighting it looks to me like you we're absolutely right about the blue and the chocolate! Funny how lighting can make such a difference ha ha
That does look like a Squirrel to me, but I've yet to see a Squirrel kit in person....but I do have an adult Squirrel doe...so I can't say for sure but I think it's a Squirrel!

In this last set of pictures, the Chin looks like a Chin, and the brown one looks much more like a Chocolate . . something. Chinchilla takes almost all of the pheomelanin out of the coat, and a little bit of the eumelanin, too. If your buck is a Chin (and the Chin kit seems to confirm that), then, when this buck is bred to REW and Himi does, anything that isn't REW or Himi has to be some variation of Chin. So the "Blue" can't be a Blue, it would have to be a Dilute Self Chin, which would be a lighter shade of gray than a "real" Blue. By the same token, the brown one is a Chocolate Self Chin, which is a significantly lighter shade than a true Chocolate (though you might have to have it sitting beside a true Chocolate to see the difference).That light colored kit is still 'a puzzlement;' if it was a Squirrel, the top color should be the same as that bluish kit, but it's much lighter. Possibly a Lilac Chin, though now, I'm having problems seeing the lighter inside of the ear that I'd have sworn I saw in the first set of pictures!

It could be that between the harsh light and the rabbit's age you could see through the fur easier in the first picture. They're 4 days old in the first set and 5 days old in the second. I was using the squirrel kit picture posted on http://www.gbfarm.org/rabbit/holland-colors-agouti.shtml as a reference in my guess, but they don't have a reference for a Lilac Chinchilla so I guess that could be a possibility.
You must log in or register to reply here.
Share:
Reddit Pinterest Tumblr WhatsApp Email Link