We just got a bunny from a family who didn't handle the bunny for 2 months. We are told it's a boy. He is very skittish, when you try to pet him he runs from side to side in his cage and freaks out if you try to pick him up. I was able to pick him up once and set him on my daughter's lap, she's 7, he sniffed her shirt then bit her chest. Is it too late to make him a family bunny? Or is there a chance he'll get used to us and start to like to be handled?
P

I do not specialize in pet rabbits, and @Bunnylady or @SamanthaDrawz would be better suited, but he is young enough with special attention, he could come around. Be friendly and patient to him. I would get him out frequently so he is more used to being handled. Only time may tell.

yup, what pastor dave said. maybe yes, maybe no. keep working with him, calmly and quietly and it may make a difference. good luck

Hm, try sitting by his cage for a while then (slowly) put your hand in the cage and just leave it there (don't move it around) so he can get used to your scent and know that your not trying to hurt him. After he's fine with you putting your hand in his cage, slowly try getting your hand closer to him and giving him treats. After a couple of days of that, try slowly petting him and petting him on his side then towards his underbelly. After maybe a week or two, when he's more comfortable with you, try picking him up. If he still struggles, then put a box in his cage and when he runs into the box for cover, pick up the box with him in it and sit down with him on a small couch or something so he can't get to far away from you, but he doesn't have to sit directly on you and freak out. Then after a while he should get used to you enough that he'll know he's safe with you.

I was going to suggest a treat but since he's already bitten, not sure that's a good idea. Lots of time quietly near him . Some rabbits never do tolerate much interaction. I would give him at least 2 weeks to 4 weeks to acclimate. Avoid picking up during this time unless it's necessary. Probably will always be skittish

@LukeMeister the box sounds like a great idea definitely going to try that once he's more comfortable! I've held lettuce and he'll eat the furthest end from my hand so I'm guessing it's a good start!

Greetings @kellyjean from the front range in Colorado. Welcome to BYH! Congrats on your new family bunny

I'm sorry he didn't get off to a great start... biting your daughter. Hope it didn't freak HER out too much! I hope the pro's advice above helps and you can bring him around to be the family pet you want. If you can, maybe post a couple pics? We all love to drool over everyone's animals... Thanks! 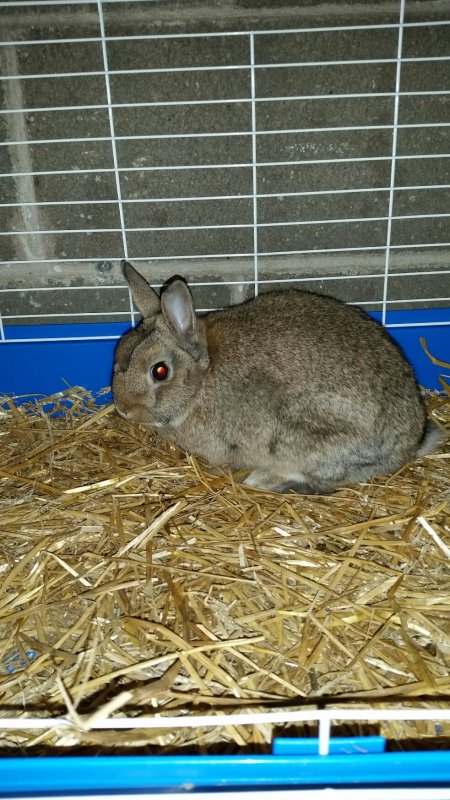 @Latestarter Thank you! She was frightened but seems to be ok now. She gave him some lettuce, a carrot and some more fresh hay. And then let him sniff her, she really wants him to love her!
You must log in or register to reply here.
Share:
Reddit Pinterest Tumblr WhatsApp Email Link