help me with colors pls! 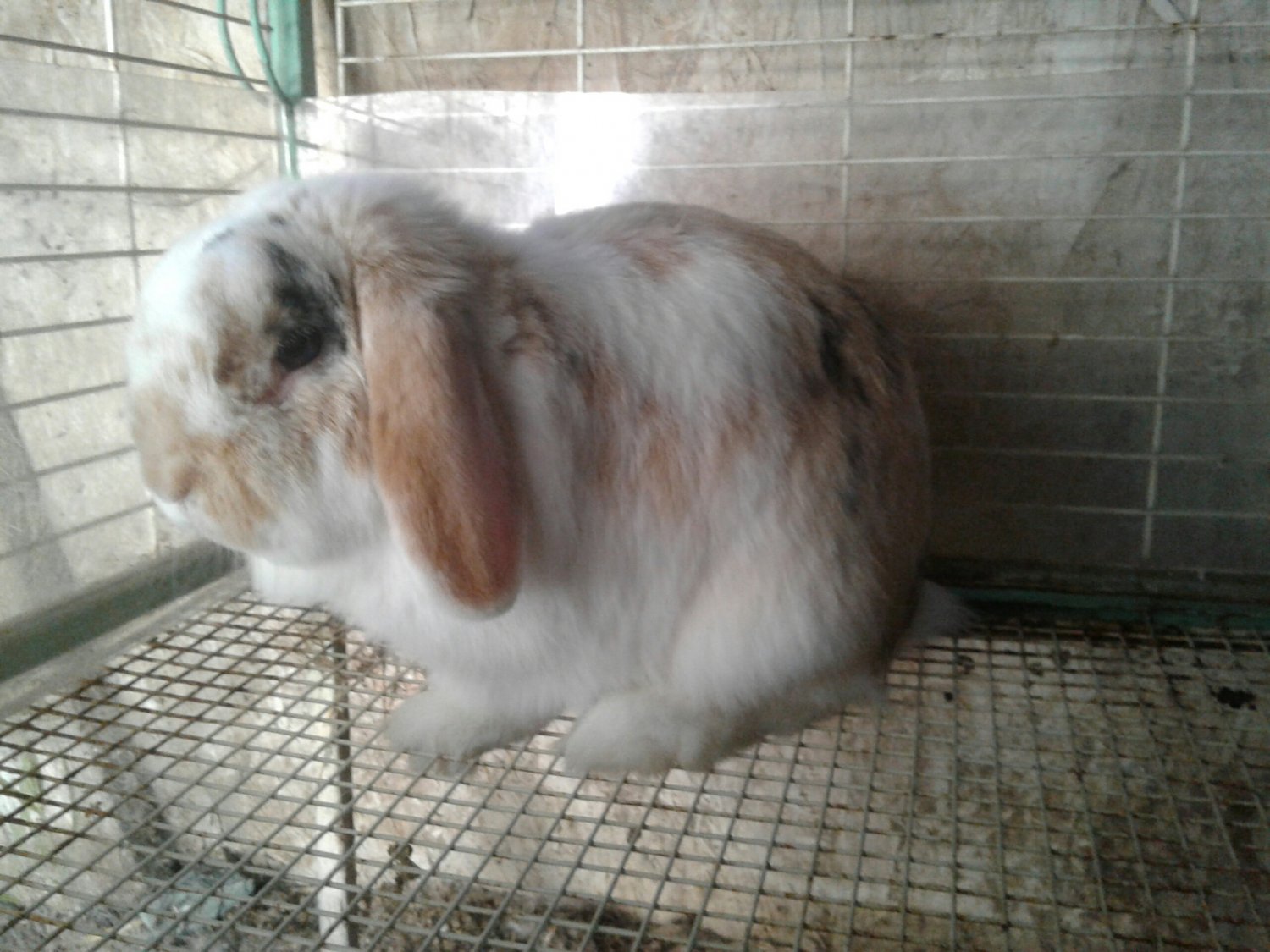 (The picture that was sent to me b4 I picked him up. Owner died. Kids didn't want it) 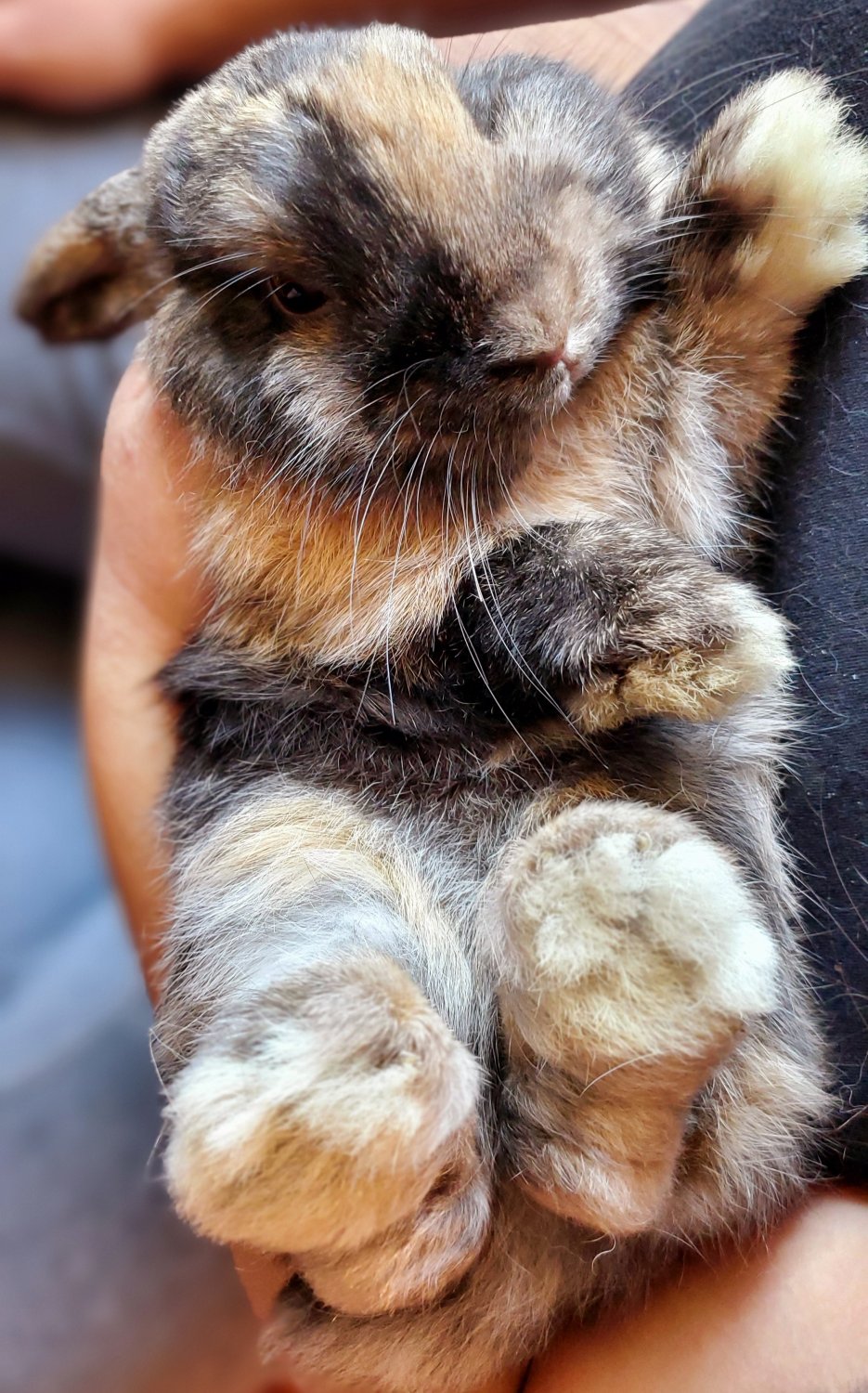 (I've had spice for almost a yr.)
Hello! I am new to the bunny world and need some help understanding colors! I have acquired a holland lop buck someone no longer wanted. the picture of the first one is the buck. What color name would he be considered....I almost think its a broken blue tourtiseshell???? But not sure. Please help! Thank you!! and for the female a tourtiseshell??? I've had her for almost a year now. I say tourtishell due to me having a cat with that patern. Pls correct me if I am wrong!

"Broken Tricolor" is redundant; a Tricolor by definition is a broken Harlequin.

At 5.5 lbs, I have to think your boy is a Mini Lop. Hollands without the dwarfing gene can get that big, but the head/ear proportions would look different.

The top looks like a broken tricolor And bottom harlequin

Bunnylady said:
"Broken Tricolor" is redundant; a Tricolor by definition is a broken Harlequin.

At 5.5 lbs, I have to think your boy is a Mini Lop. Hollands without the dwarfing gene can get that big, but the head/ear proportions would look different.
Click to expand...

Oops. You can tell I don't work with those colors or breeds.

According to the ARBA standard, the head of a Mini Lop is to be "Strongly developed and sturdy, without being too narrow. The crown of the head is to be boldly arched. There should be a slight curvature of the skull from the base of the crown toward the nose. The head should be bold and balance with the rest of the body. Faults - Long, narrow head, pointed nose."

Oddly, the wide, well-filled muzzle isn't mentioned, though it isn't with the French Lop either, and the Mini Lop has long been known as a sort of scaled-down French.

In other words, all those "Mini Lops" with long, narrow faces and ears are poor representatives of the breed, assuming they actually are being correctly identified as "Mini Lops" to begin with.(This is one of those things that drive me nutsy-cuckoo. A lot of people seem to call anything with ears that don't go up a Mini Lop; I can't tell you how many times I have been told, "we bought the kids a Mini Lop, and it grew up to be, like, 12 pounds." The good ones, the ones that are bred to the standard, have broad heads, thick, broad, sturdy bodies, a clearly defined crown, ears that don't hang much below the jaw, and don't weigh more than 6 1/2 pounds).

The most likely results of breeding a Tricolor and a Harlequin are more Tri's and Harlequins, yes. But Harlequin is not a combination of the most recessive genes in their respective series, so there are a few other possibilities, with Orange and Tort being at the top of that list. Depending on what else might be lurking, you might see Magpie (which is Harlequin + Chinchilla), Sable Point, or even Frosty, with dilute and Broken versions of all of those possible. You might even get REW's. One thing you won't get is Charlies - which are rabbits that got the Broken gene from both parents. And that's really a good thing. Charlies have very little color on them, which makes them very appealing to the pet buyer, but they also have serious problems with their digestive systems that make it hard for them to absorb the nutrients from their food and make them prone to G.I stasis. Most Charlies lead short, periodically agonizing lives as a result; some don't survive long enough to make it out of the nest box. The best way to avoid Charlies, of course, is to not breed a Broken to another Broken.
T

I'm also thinking he isn't a holland but a mini lop...never seen 1 before?
T

Does he look like a holland or mini??? He weights about 5.5

Holland, with that pose. I am not real familiar with those breeds. But I know the Holland are smaller and upright.
T

Bunnylady said:
"Broken Tricolor" is redundant; a Tricolor by definition is a broken Harlequin.

At 5.5 lbs, I have to think your boy is a Mini Lop. Hollands without the dwarfing gene can get that big, but the head/ear proportions would look different.
Click to expand...