High Desert Cowboy- How far is it up north?

It is a small park with only one main road going through it so it is easy to miss the turnoffs to other areas. We probably would have bypassed it or driven straight through from Colorado on our way to visit Travis, but he was out of town delivering a load of wethers so we had a layover of a day. He told us about the park and the fruit picking so we detoured through there. We had to ask at the main information ranger station where the orchard was. They gave us a map and told us where to go to the orchard that was open, as well as some other interesting sites.

It is a great park and probably somewhat overlooked by tourists visiting the major parks. Beautiful rock formations on the way in and out as well as in the park itself, lie a lot of Utah. The creek/river that runs through it is beautiful too and probably the reason those early Mormon pioneers decided to stop there. The river is a small tributary of the Colorado, which travels down to Lake Powell.

I got back from hunting this morning and noticed a new little black lamb following Bellwether around. As I’m watching her I begin to think that there’s no way she had a single after having triplets last year. Then I got the distinct impression that I needed to walk through the whole corral, to see if I could find a still born or something. I walk through and at the very far corner under some sage brush I find a live lamb. He had zero strength, I tried to stand him up and he’d just flop down all legs going different ways. And bellwether, being the turd she is won’t let me come near her to try and milk some colostrum out of her so I ended the hiatus and turned Bella loose. Suddenly Bellwether is a model citizen and stands completely still so I can try to milk some colostrum out of her to save this lamb. Then he got some colostrum in a bottle because I couldn’t get much out of her. After about an hour of watching him and waiting to see if he’d be alright he finally stood up and started wandering about. To better his chances I’ve put Bellwether in the little pen with her babies so I have an easier time keeping an eye on them and hopefully he keeps doing better. His little sister seems to have plenty of energy. In all my rush to help I forgot to take pictures of the pair so I’ll have to do that later.

Good luck with this one.

That is why jugs (5 x 5 pens) for one ewe and her lambs are so good for bonding moms and lambs. Glad you had one. Hopefully Bellwether will realize that she has two lambs. We invested in a grafting panel when we bought our new jugs. It was great for holding the prolapse ewe in place to doctor her up. In the past I have haltered and tied ewes that were spooky with their lambs. Sometimes the teat plug needs help to come out, or a new mom things the lamb is taking unwanted liberties! Good thing for Bella!

By the way, did you get anything on the hunting trip?

So the little lamb looks a lot better today. He still makes me super nervous but I get that way with any little guys that struggle. My wife calls him skunk. 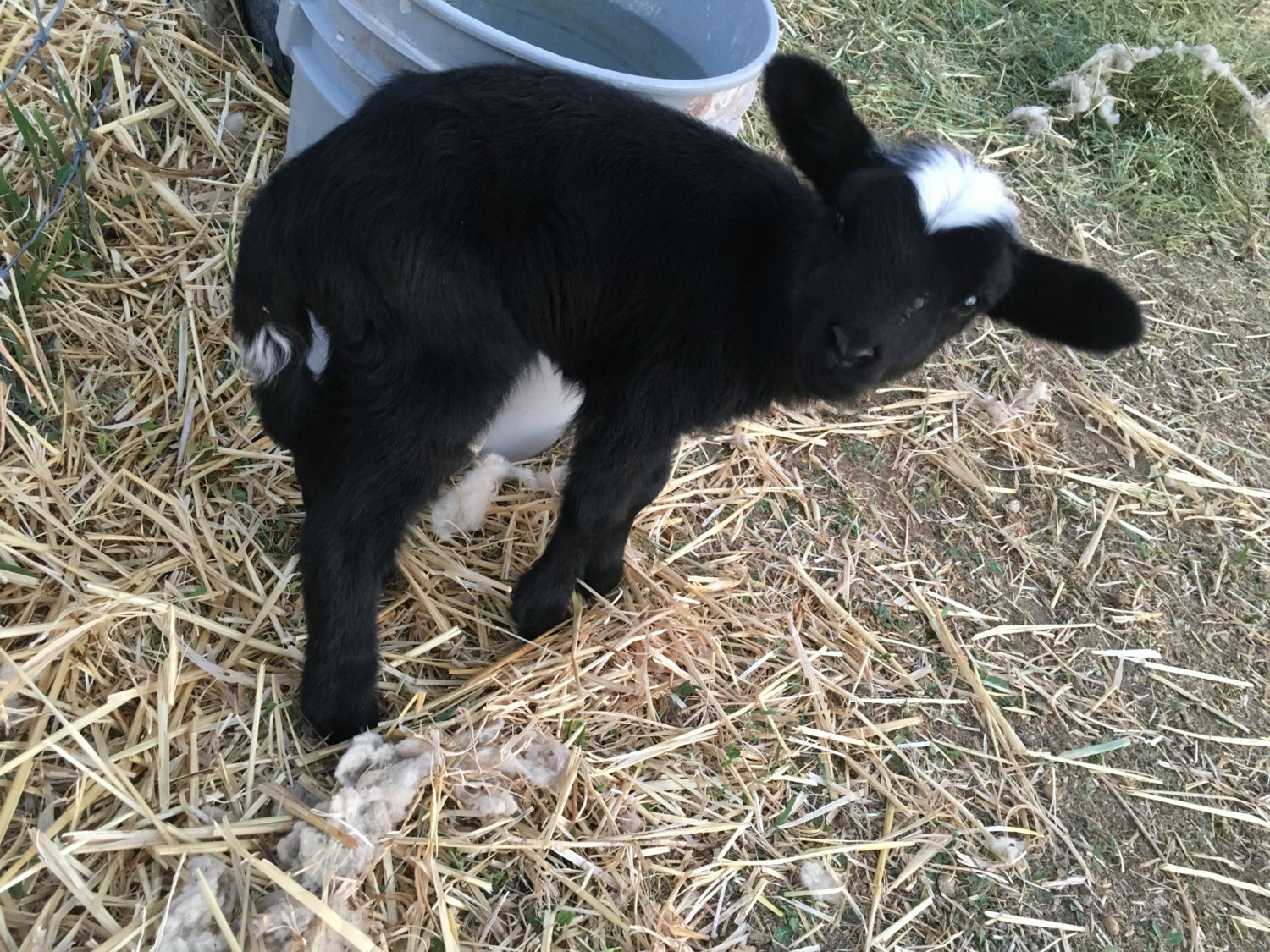 I am glad I’ve kept the small pen, it started as a training tool for Bella to learn to give some space and it’s worked great for corralling the ewes up for shearing or separating. And yes @Ridgetop it was a very successful morning.

Has she started feeding him yet?

She does stand and feed him. And he has the energy to stand and feed himself which is good. I just can’t be near to check, if she sees me she panics and won’t hold still. She’s a range ewe through and through. She doesn’t have any desire to be friendly and so we’ll accept that fact. And she cannot be led, if you grab her she flops down so you just have to drag her. Great for shearing, and that’s about it. Speaking of I’m looking at buying a new set of electric clippers, maybe premiers 4000s? Seems to be the best for a reasonable price

Do you have one of the large Oster horse clippers? If you do, and it is working well (especially if it is one of the older models since they are made of metal and are heavy duty) you can buy an Oster sheep head for the clipper. It is about $100.00 which will be much cheaper than buying a complete new shears. You need the sheep head since the regular shear head for trimming cattle, horses, and goats will not have the power to cut through the fleece. Fleece is full of lanolin grease which causes the blades to have to work about 3 times as hard on fleece as hair. Dirt and dust get down in the wool ad stick to it because of the grease. Shearing our show lambs, we used to shampoo them with dish soap since it would cut the grease. With full grown ewes you won't be able to do that.

If you don't have an Oster type horse shears, or just want to buy a new shears, the Premier reviews are good. Be sure to order it just before you shear so that if it doesn't work as it should there will be no problem returning it. You don't want to order it and have it sit around for a while before you use it only to find that you had it so long it can't be returned.

Be sure to order at least 2 pairs each of blades and cutters since dirty fleece dulls the blades fast. Make sure they are interchangeable with most other brands too. Some clippers only use their own blades which means you can't use them in other makes of clippers. If your clipper goes out you are out the blades too. Both the blade and cutter will need sharpening pretty much after about 2-5 sheep depending on how dirty the wool is. I am talking about the large tooth blades that are used for taking off the fleece not the smaller finer toothed blades that are used to give a smooth show ring clip. You won't need those. Using Kool Lube on the blades to lubricate them and using Blade Wash when they get sticky helps too, I pour the blade wash in a bowl ad when the blades get sticky while shearing I run the clipper while submerging the blades in the blade wash. Submerge only the blades!

I have heard good and bad reviews on some of the newer clipper brands. The Premier clipper sounds good in the reviews, better if you use their new ceramic cutter. Premier is a company with a good reputation too. The reviews were from people using them on donkeys mohair goats, llamas, etc. so call Premier and talk to them before ordering to make sure that you are getting the actual sheep head. If you like the ceramic cutters, I might go ahead and order a couple. They sell Heiniger blades for the cutter so it should fit our Heiniger. According to the reviews they don't dull as fast. I wonder if they would break if you dropped the clipper or it got kicked. Also, I saw in their catalog under accessories they offer sharpening as well. As soon as you finish shearing for the year, it is a good idea to immediately have the blades sharpened so they are ready for the next time.

Since you are going to be investing in some nice Polypays, you would probably enjoy having an electric clipper for shearing, instead of having to use the hand shears. Hand shears are quaint and picturesque, but when doing more than one sheep, nothing beats a good pair of electric shears. Good tools lighten the workload.

We have a set of Heiniger clippers, and a set of Andis clippers for sheep. We have dozens of blades in all sizes. Some of them are for sheep and some of them are for goats. Once DS2 and DS3 had about 50 goats each to shave for the Fairs, the large clippers went faster for bodies while the smaller clippers were used for faces, legs, and udders. We had multiple small clippers and multiple blades for each since after a while the shears get too hot to hold. The boys would trade off clippers letting one set cool off while they used another. Good times! Lots of fun!