I think it depends on the animal and their history. These 2 were given to us 3 years ago, presumably 6 or so years old. Before the people moved to Florida I saw the husband at the grocery store and asked how they managed to work with the boys given how much they don't like to be touched. He said "We manhandled them". Might be the reason they don't like to be touched you think? Laddie was a purchased animal but Teddy was born at their place. Clearly they didn't spend a lot of quality time with him when he was young.

There’s a lady I go to church with who raises alpacas and sells the wool? Hair?, but I can’t say I’ve ever been to check it out. I can say the fiber from an alpaca is great, I have a nice sweater from Peru that was made out of baby alpaca fiber and it’s incredible

So this weekend I had planned to trim Jack and work on framing the basement. But of course I said those plans out loud. Friday afternoon I get a call that the water is out and they don’t know when it’s going to be back on. We’re on a shared well. Being my helpful self I decide to lend a hand and start trying to locate parts. For whatever reason once the line is dug up we find out it’s a six inch line, even though it’s 4 leaving the well house and three on the end, but this spot is 6 and the local store doesn’t carry 6 inch and the nearest town that does the store that carries it was going to be closed by the time we get there. I track down a part and as we’re trying to get it on Murphy’s law went into full swing and delayed us another several hours. At one point my wife called and asked if I planned on coming home. I said “Sure, but I’m covered in mud from head to toe and if I walk off we won’t have water until tomorrow.” She suddenly didn’t want Me home and we finally managed to get it fixed by 11 at night. Saturday was more of a comedy of errors as we had to run to town which turned into an all day trip. Finally today I grabbed my 10 year old and said we were framing and I would be condemned (editing here) if anyone was going to stop me. Got a few walls up and feel accomplished.
On a side note the sheep are looking bigger and bigger and Heart has a decent udder developing. Should be seeing lambs in 4-5 weeks.

Why are plumbing projects always like that? Plumbing , piping, water work... it's always such a trial. Back and forth to the hardware store. Glad you got it fixed, trying to clean up a muddy self with a water bottle wouldn't have been much fun. I laughed at "suddenly didn't want me home'

Poor Alfalfa. He has led such a easy life full of ear scratches and apples he’s finding it very unfair that I’ve been using him as my practice dummy for Bella. Fortunately for him she is much better behaved than she was as a pup. I remember once when he was living in the chicken coop and Bella was a pup she chased him in and then bit down and tried to drag him out! She was such a mouthy little thing, now she still nips on occasion but understands that it’s not a necessary act. Everyday when he gets fed I try to put Bella through the rounds of herding Alfalfa to me. It may be just one animal but you can tell she loves every minute of it. She’s got to work. And we learned she’s a Carhartt girl, or maybe just a daddy’s girl. For Christmas my wife bought me a new coat and finally convinced me to throw my old Carhartt away. I got it my senior year of high school and it is pretty shredded, there’s really not enough patches in the world to put it back together. As I walked to the trash can I decided I’d rather put it in the dog house for the dogs to use for bedding. The warm interior was still in great shape, the exterior was what was thrashed. We’ve tried this before with old blankets and towels and Bella and Kya just tore them to little pieces so it’s no great loss if they repeat. Bella pulled it out of the dog house and packs it around like my 18 month old with a blankie. She lays it down wherever she wants to rest and cuddles in. And she had made it clear she’s not sharing!
I had to laugh at Heart today, she was getting enthusiastic at the trough and as she was eating her udder was jiggling like crazy. Do they make bras for sheep? I’ve noticed that Dotty doesn’t seem to be developing an udder yet but I’m almost positive she’s pregnant with how big she’s been getting lately. Of course she’s also a first timer which probably helps things stay tight until the end. Bellwether, she looks pregnant but I haven’t been able to check her udder very closely. I can only get her to stand still for me when I have Bella, and where I’m giving the girls a break for this last month of pregnancy she is keeping her distance. And Gus Gus just keeps eating, he’s a growing boy after all. I’m not trying too much to be all over him, he is a ram and I want to insure we understand personal space. He was good to be handled for the“dagging” as it’s apparently called when you cut dingleberries out of a rams wool but I don’t push it. He’ll be a year next month, so I won’t say he’s a very well behaved ram as there is time for that to change and the last time I commented on a rams behavior someone got head butted. For now it’s only him getting head butted by Dotty on occasion, I really don’t know what is up with that ewe. I thought it was just a twin thing but after Lambert left she started butting heads with Shaun and now she does the occasional cheap shot at Gus Gus. But he’s smitten and she’s his favorite ewe to chill with.

That's sweet about Bella and your old Carharrt coat.

Today bellwether got close enough with her back end to me that I could see she’s starting to get a bag as well. So ideally we should have 6 lambs this year. I say ideally of course, things happen. But Heart had twins with her first, Dotty is Hearts baby and has that going for her, and Bellwether had triplets last year. I’ve done my part, their genetics will do their part, and the rest is out of my hands.

Plumbing always turns into the nightmare you wish you didn't have. Good that you finally got it fixed. Your ewes seem to be coming along nicely, looking for ward to lamb pictures. 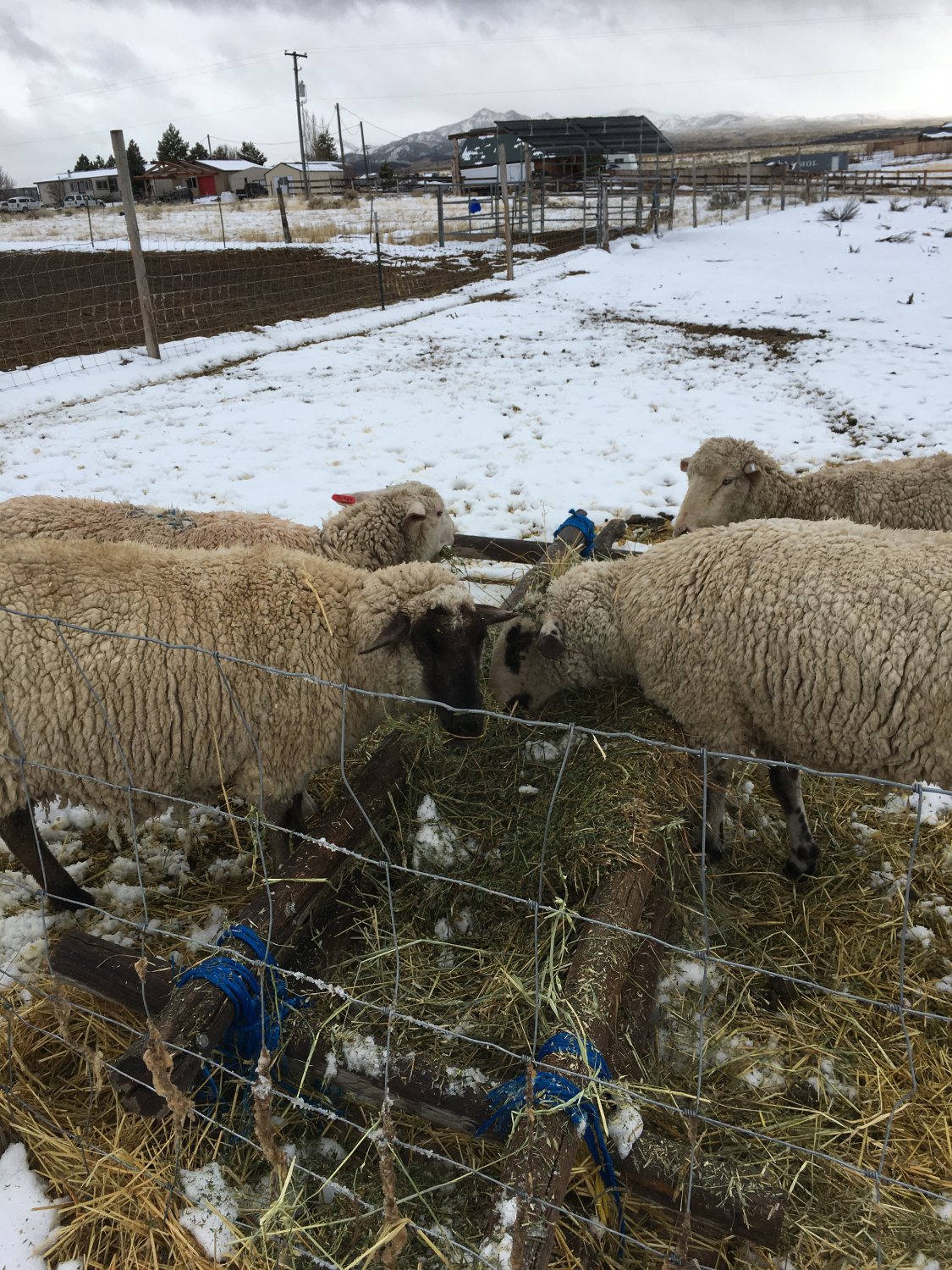 And this right here is why I crutched vs shearing. I woke up and it was 41 degrees and at 7am it started snowing. Ah Utah, the land of 4 seasons in a day