Sitting here at my desk, in the house we've lived in for only a month, I reflect on how lucky I am to have all that I have. I have 4 healthy children, a fiancé that I've known for almost my entire life, I have a piece of land that's beautiful, good neighbors, and a job that I love. I'm a lucky woman.
I have 1 daughter and 3 sons. My daughter is the oldest and just got into Nursing school I'm so proud of her accomplishments, and the fact that she's following me in the medical field. My oldest son is finishing up his BA in Education, and will move into the MA program at the same college. My middle son is getting into the union, so hopefully he'll be set, and my youngest son is in 11th grade, considering a career in computers and looking forward to his junior prom in another 2 weeks.
My Fiancé is a lawyer, he works in corporate/contract law, mainly with Native American tribes, and teaches Native American law in the city. He's a good man, the kids love him, and he loves us all very much. Our wedding is in July.

The farm...I keep honeybees, and chickens right now-adding turkey poults next week, and hopefully goats in the near future. I love to vegetable farm, and this years crops will feature corn, tomato, beans, peas, cucumbers and squash. Spring is slowly getting here, so I am in the prep stage of the year. I am also planting apple trees on earth day, in my dads memory, and a cherry tree in memory of my husbands brother who passed many years ago. We're pretty sentimental people. lol.

I'm going to pause here-it's daylight and I must open the chicken pen so the ladies can stretch their legs.

Count your Blessings! Life is wonderful isn’t it? Congratulations on a perfect new home and the room for animals and a garden. More congratulations on the upcoming wedding, Blessings on many good years together.

Looking forward to following along on your journey.

Happy Saturday!
I went to visit my neighbors goats the other day. Yup. I gotta have a couple. My little dog, Shelby (A shihtzu) is not impressed, and sat several feet away, looking insulted that I would consider even looking at those farm animals, when obviously, having a shihtzu should be enough! My GSD loved them, and the Golden wasn't allowed into the pen so she just drooled on herself and licked the ground. (she's a MENSA scholar)

I laid down the hardware cloth for underneath the new coop, hopefully FEDEX will figure out how to get to Long Island from PA, and deliver. I've been on the phone with them, and frankly I think I'm going to have these chicks living in my office until they're laying before FEDEX gets their poop together.

My youngest son pulled all the weeds from my vegetable garden yesterday, it was a very labor intensive job, so I was pretty happy that he took care of it. I will roto till it today, then lay the weed cloth down, and put in the pathways. Last year was a crazy maze of weeds and vegetables and I'm not having it again this year. I will only grow chemical free and organic, so my bees can be safe, so this is the only way.

I checked the new hives yesterday, and the girls are happily building comb, and looking healthy. I fed them again, and they seem to be finding pollen on the spring flowers and flowering trees. I worry about that, so that's one less thing.

Monday or Tuesday I pick up my turkey poults, I'm looking forward to it. My neighbor has a girl that helps her clean and care for her flock and herd, so I can have that girl come at wedding time, and I can relax knowing that all my critters are cared for by someone who knows what they're doing.

Well, I'm off to feed and water the animals and people. See you all later!

A farm sitter is a wonderful friend to have!
I don’t use any chemicals on my garden either. In the past I’ve used cardboard, paper feed sacks and mulch with great success. I used weed cloth in 2020, it wasn’t real good quality and crab grass still grew under it! In 2021, we laid down paper feed sacks then put the weed cloth down (I had another roll of the same stuff) and it worked great. This year, no garden, I’ve moved to a rent house and I’m waiting to close on my new farm. Won’t have time for a garden.

Your bees will thank you for not using chemicals on their food too!

Baymule said:
A farm sitter is a wonderful friend to have!
I don’t use any chemicals on my garden either. In the past I’ve used cardboard, paper feed sacks and mulch with great success. I used weed cloth in 2020, it wasn’t real good quality and crab grass still grew under it! In 2021, we laid down paper feed sacks then put the weed cloth down (I had another roll of the same stuff) and it worked great. This year, no garden, I’ve moved to a rent house and I’m waiting to close on my new farm. Won’t have time for a garden.

Your bees will thank you for not using chemicals on their food too!
Click to expand...

I'm definitely going to try the feed sacks under the weed cloth! I am a bag hoarder...my supermarket only uses brown paper bags, so maybe those would work?
I have several neighbors who have agreed not to put anything down on their yards (chemicals and such) I asked them not to, while delivering them some free honey and explaining that the reason the honey is safe and great for their families is that there's no chemicals in it...it seems to have worked. Everyone has dandelions and clover and they leave them alone.
I'm pretty excited to have someone I can count on for farm sitting. My neighbors farm area is very well taken care of, the animals have fresh water 3 times a day and their bedding is changed daily. There's zero odor, even with the ducks she keeps, so this will be a great relationship to have.

Just don’t use the woven plastic feed bags. I use those for trash bags.

Dandelion petals, dried, make a nice tea. Use some of your honey! Pick the neighbors dandelion flowers, “gift” them with tea and honey. Bribery works well with neighbors!

So we had a nice weekend here on the Island, of course my chicken coop still hasn't arrived, because why would Fedex freight find us without a problem? It's supposed to arrive today, but I'm not holding my breath on that one! When the pallets are dumped in my driveway, I'll believe it. It's a good thing the new chicks are still so small, because putting up the coop and making modifications as needed will take some time. FH is not really handy (such a city boy) so it will be up to me and DS2 to instruct him and DS3 on how to be of assistance without driving me crazy.

We had our first fire in the pit behind the cabin on Sunday, and it was glorious. FH is very good at clearing brush, and he wanted to hire someone to take the brush piles away...I was horrified at the thought, because brush burns really well, and it's free! (The brush wasn't little wispy stuff-it's vines and large dead bushes) Plus, next to putting out fires, and treating sick people-there's nothing I like more than having a fire in the pit! City boy will get the hang of it sooner or later!
In other news, we found a flex tube in our new coop area as we were clearing for the coop...we had no idea what it was for-until Monday when my neighbor opened her pool-it's her back wash vent. That's not going to work for me, I moved it down the hill towards her property, and will speak with her today about moving it completely-I can't have chemical laden water coming onto my property with the chickens right there and several hives around the property.

The baby chicks got moved to the garage over the weekend into a huge dog pen. They seem about as happy as chickens can be I guess. They have tons of room and they can scratch and peck to their hearts desire. I love them but it's going to take some time to really win them over. Meal worms have always done the trick! I have to call about my turkey poults-shipping was delayed to the farm I get them from, as is all shipping these days, so I want to make sure I'm there to pick them up when they arrive.

I opened the new hives this weekend to make sure all was well with the new girls-they are happily drawing comb and acting like normal Italian honey bees, puppy-dog gentle. They were curious about me, but ignored me for the most part. After the 20+ stings I got a few weeks ago, (and the fact that the stings are still raised and bothering me) I was hesitant, but all went well, and no kamikaze bees attacked me.

I succumbed to spring fever this week and repotted a bunch of my house plants, and bought a few new ones, did some weeding in the flower garden area, and hung up bird feeders and put out the deer buckets. The squirrels seem to think they've been adopted by a very benevolent family, and as long as they don't dig up the yard, I'm happy to provide some tasty treats for them! I strung up fairy lights on the deck too, I have a thing for fairy lights, I put them everywhere-the solar kind, so I don't have to worry about any electrical issues, this cabin is 100+ years old, and the electrical system needs some real work-my daughters boyfriend will eventually get over here to fix it with DS2, so until then, I don't plug much in.

It sounds like a lovely place! Pictures!! Post pictures!! Hope your coop shows up today and it all goes together with no problems. 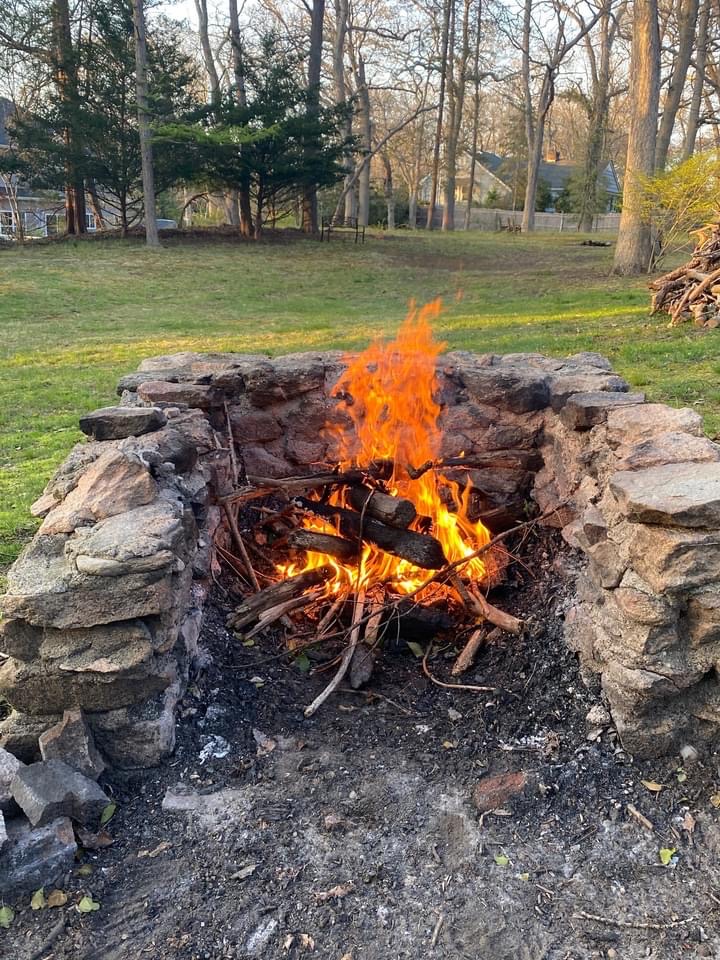 The beginnings of our first fire 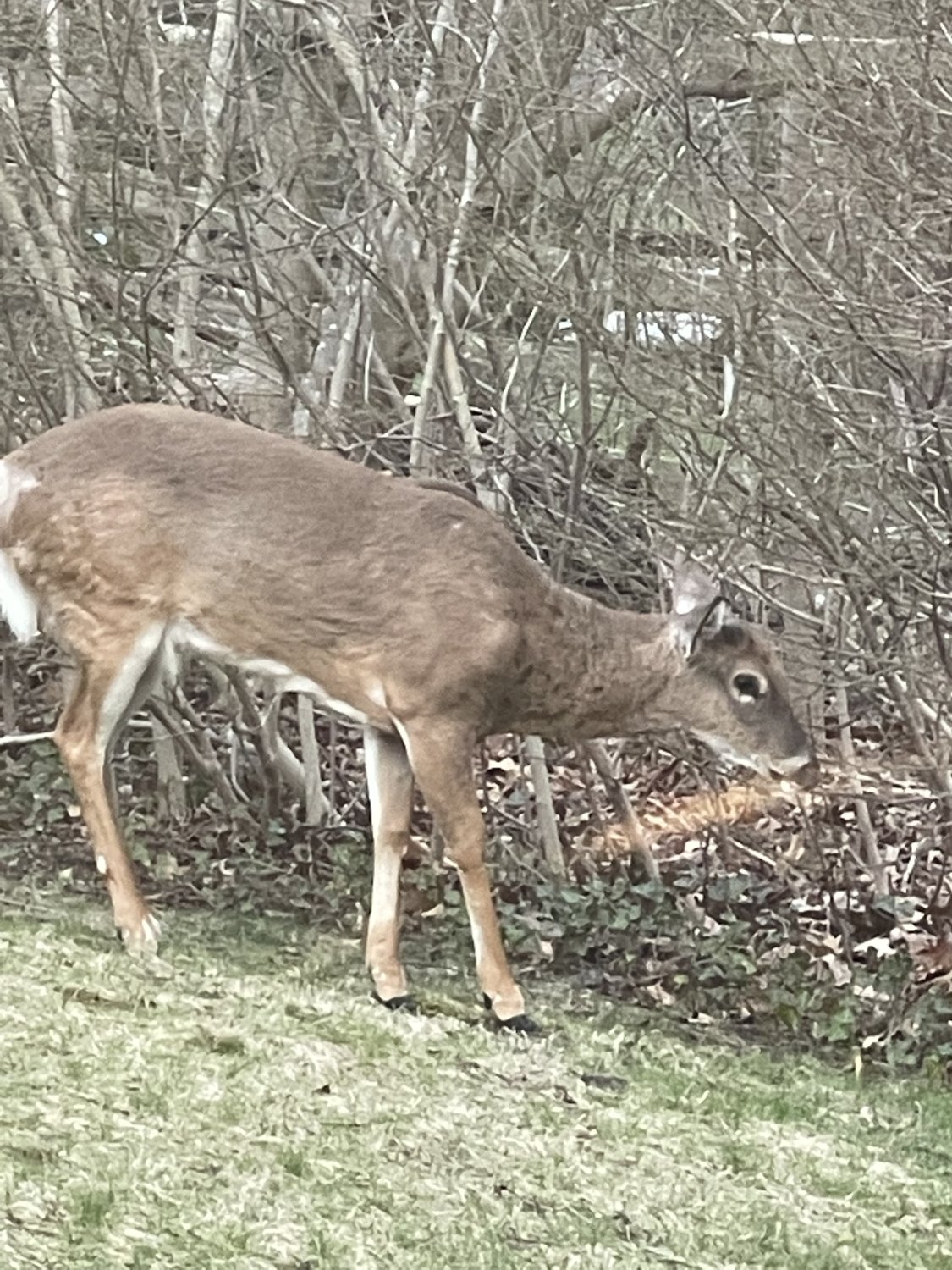 Very large buck, when he was walking into the yard from the road, at first glance, I thought we had a very lost moose heading in. 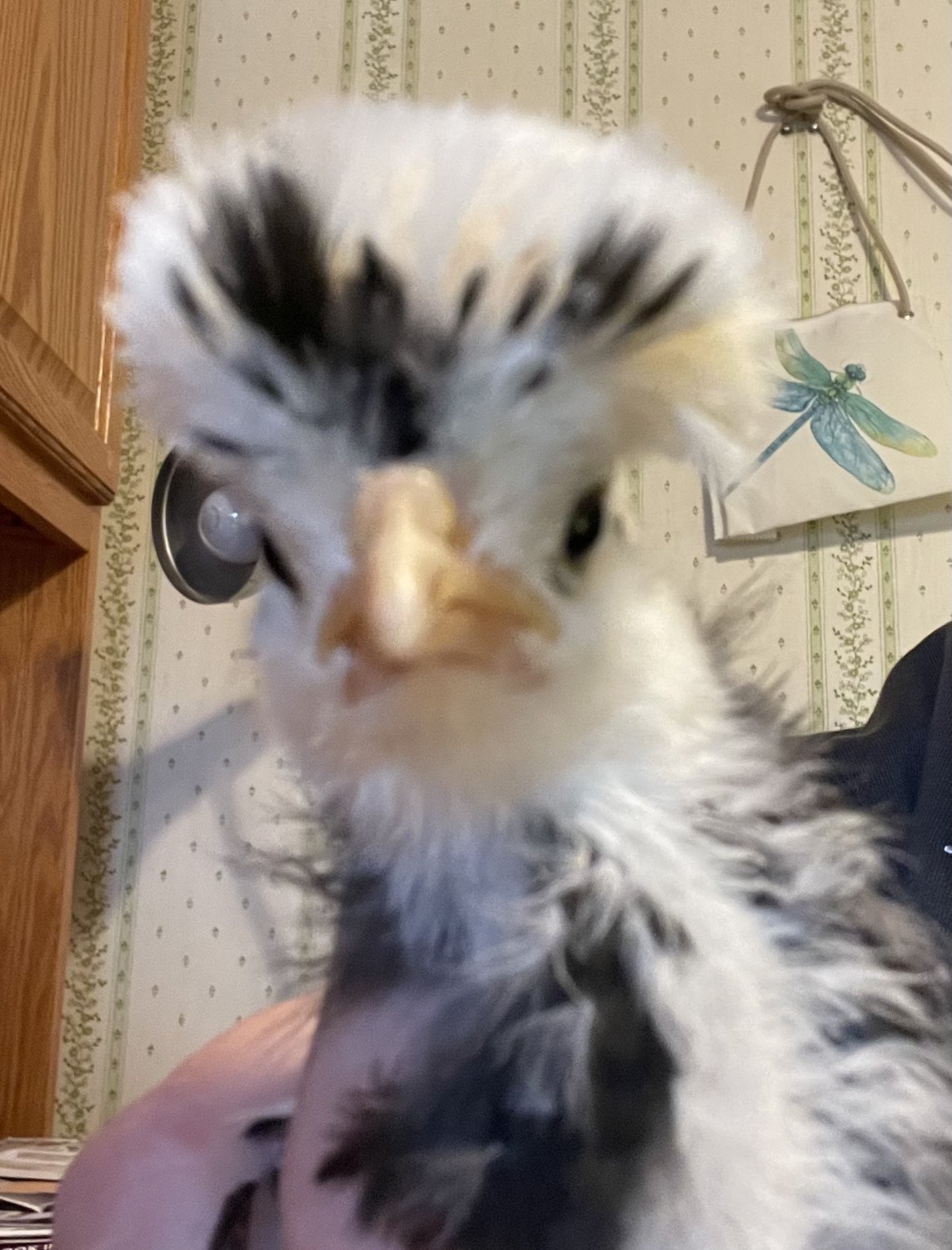 Our one Polish chick. till trying to think of an appropriate name for her. 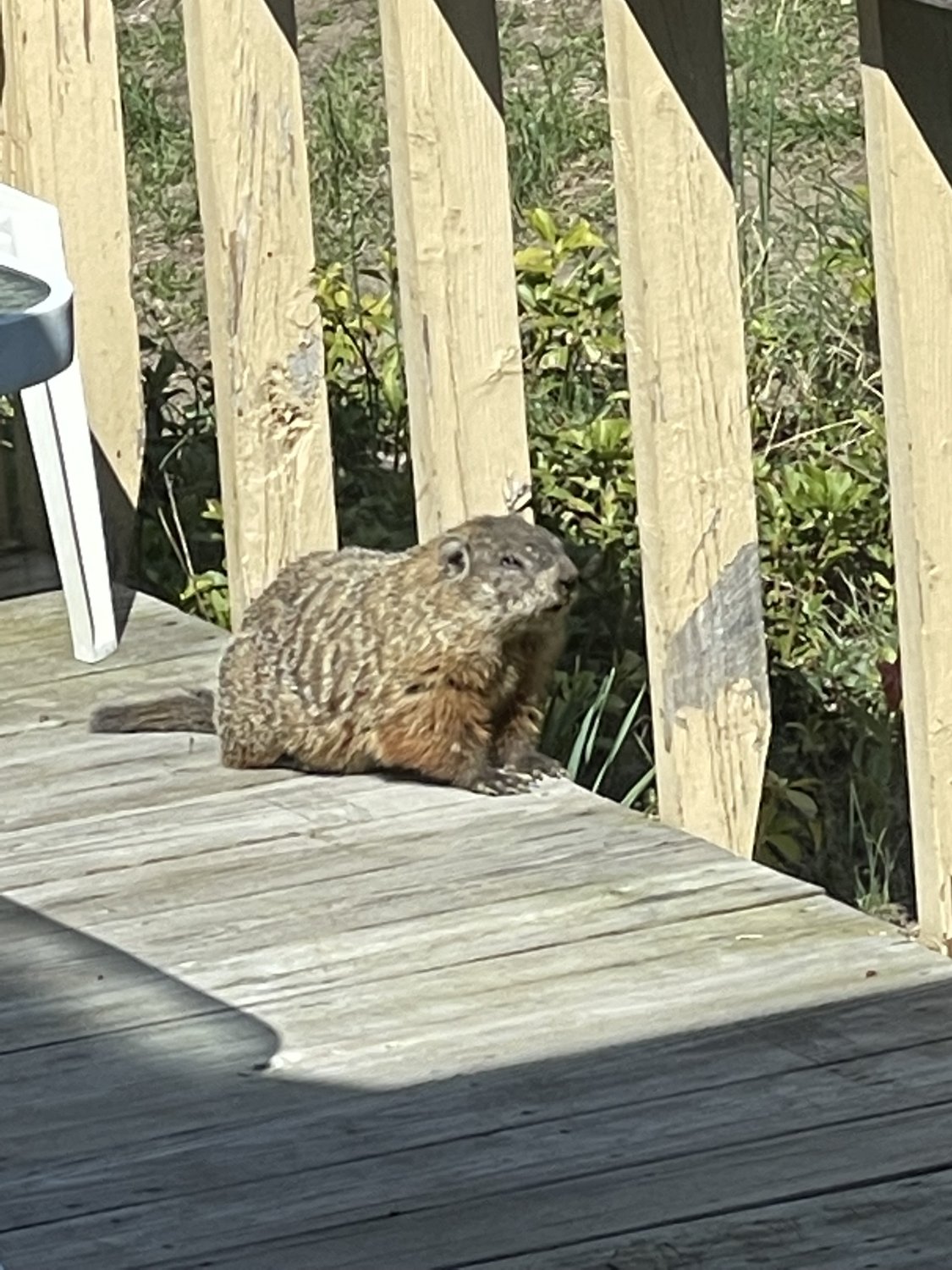 This little guy was sunning himself, until I came outside to take pictures...then I got a snotty look. I shall call him Francois.