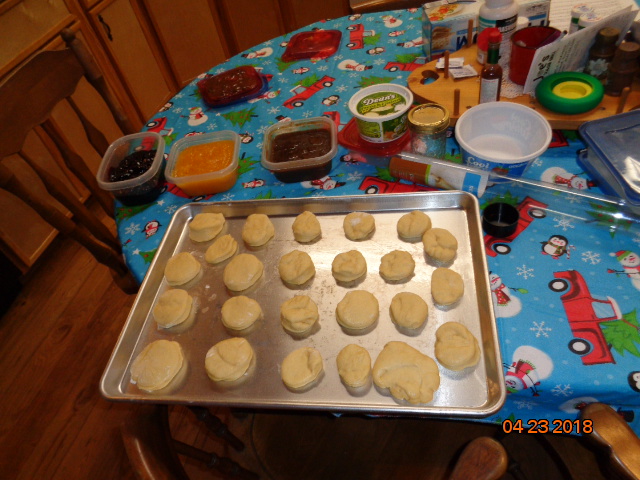 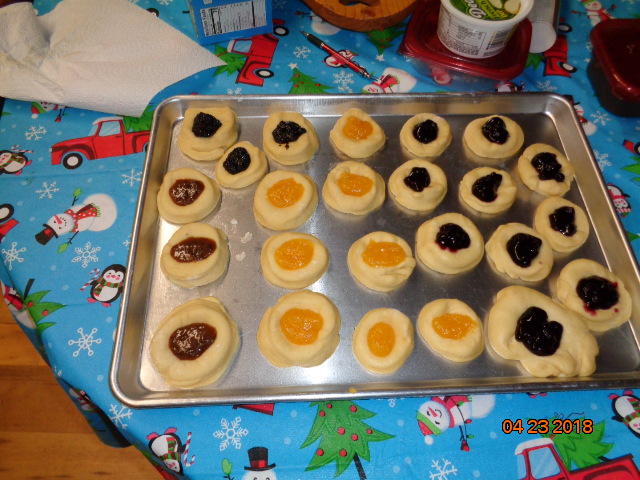 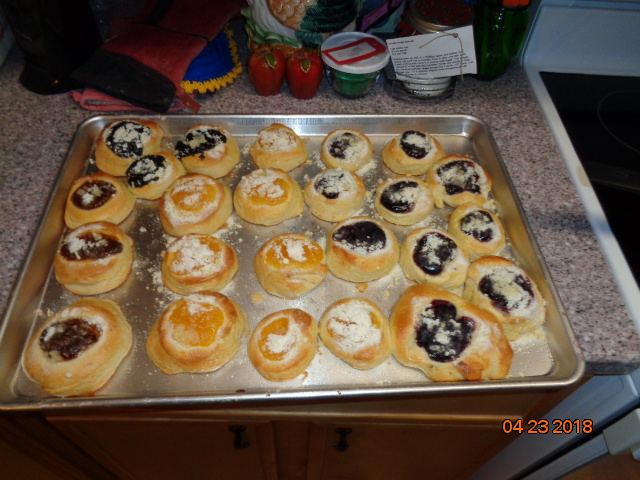 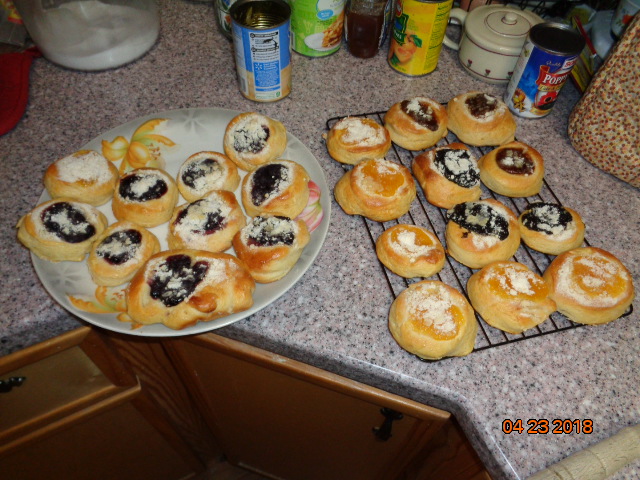 (yes, they came out too big and too thick, I punched the dough down one too many times.)

Tomorrow, I'll make more dough, and make some with apple and peach as well as more apricot.

those look yummy...my favorite is the cream cheese filling

A man of many talents! They absolutely look delish!

I used one out of an old cookbook, but the following one is close to it, tho I altered it too.
https://toriavey.com/toris-kitchen/kolache/

I said 'from scratch but not exactly true with the toppings. I used dried apricots from the produce section at Kroger and they did come out good. (make sure you have some corn starch on hand to thicken it with at the end of the reconstitution phase.)
I also bought but didn't use a can of apricot filling..maybe next time but the one 12oz package of dried apricots makes a LOT of filling, so I'll use it up first.

I was very disappointed in the canned poppyseed topping. Very bland. Needs to be put in a small pan, add some water, heated and add some sugar, maybe even honey or brown sugar.

I used canned blueberry pie filling just as it came from the can.

My sister likes prune kolaches so I did make some prune topping using prunes (with liquid) from a jar. You'll have to pit them either before heating or after. I heated the pitted prunes and liquid to a pan, heated on medium heat until just bubbling. Reduce heat and simmer for about 5 minutes to break down the skins a little as I added 1 teaspoon of cinnamon, 1 tablespoon of lemon juice, 1/4 cup of sugar, and 2 tblsp of real butter. Pour it all into a blender and blend for a few seconds...it will be thin. Return it to the pan, return to simmer. mix up 2 tablespoons of corn starch in a small cup to make a paste. Slowly add to the mixture stirring. Might have to repeat to get the right thickness for a filling. If you want, you can wait till you have the prunes and liquid in the blender to add the other ingredients, but you will still have to return it to the pan to thicken it. One jar will make a LOT of filling, but it will keep it the fridge for about a week if covered. (one recipe for prune filling called for a little nutmeg..I didn't go there)

The biggest deviation I made was in the dough, and mostly the rise time. I did not use instant yeast, just the Fleieshmans dry yeast that comes 3 packs in a strip. (watch the 'use by' date when you buy it. DO meticulously follow the temp directions for the milk. Knead the dough and form it into a ball, but avoid folding it over to make the ball.
I can't do much right now at all and get tired easily, so after following all the directions (except the dough hook part), I used an ordinary hand mixer and it was up to the task but barely..watch the dough, because it will try to climb the beaters and make a mess on/inside your mixer. I made the dough ball, let it rise the recommended time, but as I had started late, I had to go to bed. Without punching the now doubled in volume dough down, I just covered the bowl with a clean cloth and stuck it in the refrigerator till next morning.The refrigeration caused the dough to collapse. Removed it from the fridge, , let it rise again and punched it down. Then, got busy with other things, medicine keeping me un energetic and didn't get to making the filling until the dough had already been on it's second rise for nearly 8 hrs. DON'T do this. It takes some time to make those fillings unless you are just going with one kind.

IMO, the dough recipe could use some more sugar as well.

The recipe calls for an egg wash right before cooking. Others call for just a butter wash on the raw cut dough sides and top. I think next time, I will go with just the butter...speaking of which..use real butter. No margarine anywhere in the process. For the dough, just cut the butter sticks into chunks and microwave them for a few seconds to soften..not melted and definitely not so hot it kills the yeast.
If you do the dough right, don't be afraid to roll it out a bit thinner than the 1/2" the recipe calls for. It's going to rise on the sheet a good bit (the part right before making the indentations) and again while cooking. It will also expand in diameter, so don't place them too close together.

Perhaps because of the extended time I let it rise, my dough was very elastic and I had a hard time getting it to stay rolled out..some of it it wanted to contract back to a smaller size and even after cutting, a few did.
I did use some spray on my cooking sheet but sparingly. The dough has so much butter in it it won't want to stick much anyway. I sprayed the sheet, then wiped some excess off before putting the cut dough on the sheet.

The cook time directions for my electric oven was pretty close. I did cook them an extra 2 minutes because theyy didn't brown as much as I wanted, but that was probably too long. They were a little crunchy on the outside, which may have been because of the egg wash.


I am going to play around with dough this week and may even try a loaf of that frozen bread dough as the base so I can go ahead and use up the rest of the topping I already have in the refridgerator. .


(I have heard of people simply using bakeNserve rolls mashed down some and a indentation made for the filling.....I don't think that's the taste and texture I want in a sweet kolache..that's just going too far from a traditional Czech kolache recipe IMO.
You must log in or register to reply here.
Share:
Reddit Pinterest Tumblr WhatsApp Email Link