We had a really bad day yesterday. Ruby (older Boer doe) was down. She looked like maybe she was bloating, but it wasn't really bad looking yet and not taunt feeling. I dragged her as far as I could, but I found out that while she doesn't look it, she's at least 200 lbs. DH came home for lunch and we lifted her into the wheel barrow and put her in the barn so I could watch her better.
Drenched her (good ole baking soda) and gave her some pepto. She acted kind of depressed but would get up, drink, poop, etc.

Later in the afternoon she's down on her brisket, refused to get up, or eat, and is groaning. I called the vet and he walked me through tubing her stomach. No air, no anything out of the tube and she looks huge, but it feels like a water bed. Vet is already on an emergency call and won't be at the office until late, but we head down and wait for him. 8:30 PM he finally gets to the office, and this is bad news.

Hydrops uteri. Something went wrong with her pregnancy and her uterus filled with fluid. It mimics signs of pregnancy toxemia. There are no options with treatment here, the pregnancy has to be terminated. He dosed her with dexamethasone, and sent home a big syringe of it for me to give today. His prognosis was not good, she wasn't expected to make it through the night. By this time she is limp and groaning.
I woke up at 4:30 this morning and first thought was stressing over her. I didn't want to go check because I figured she had died on me. She has been up and moved around some and isn't groaning in agony anymore. She looks a lot better.

Definitely not out of the woods, we have to watch for what she passes from her pregnancy. I have the concern that it might be something like a water baby and hard for her to pass, but so far, nothing.

I figured this would be something good to post about for education sake. I had never heard of this issue, and this was the first goat my vet has seen with it.
While bloat is serious, this is absolutely deadly if not attended to, and it really looks so much like bloat with the distension, pain, not eating, etc. I was racking my brain trying to think how she would have bloated when I don't feed grain, she was in a dry lot with nothing but free fed hay and regular pelleted ration, and there's no green ANYTHING here for her to have eaten.

Here's an article on it for more information: https://books.google.com/books?id=f...q0Q6AEIazAI#v=onepage&q=hydrops uteri&f=false

Interesting - thanks for posting.

Hope she comes out of it or you!

Here are some pictures so you can see how it looks like a bloating situation, but her sides are totally soft. She was not nearly that big, even pregnant, I expected a single.

She is still in the stock trailer, we figured moving her was painful and unnecessary, plus it's still hooked to the truck if we need to make another vet run. 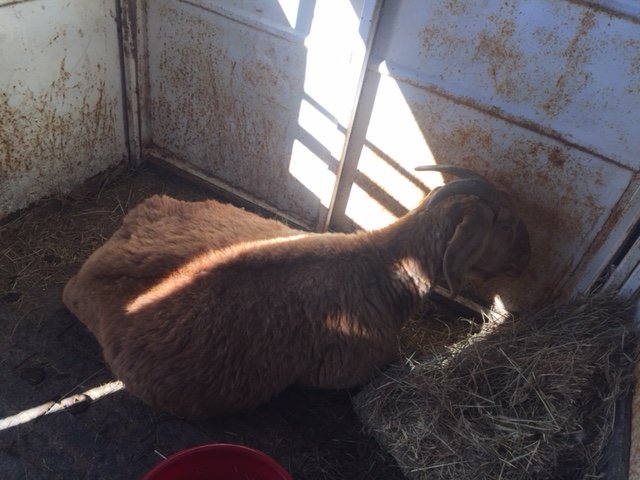 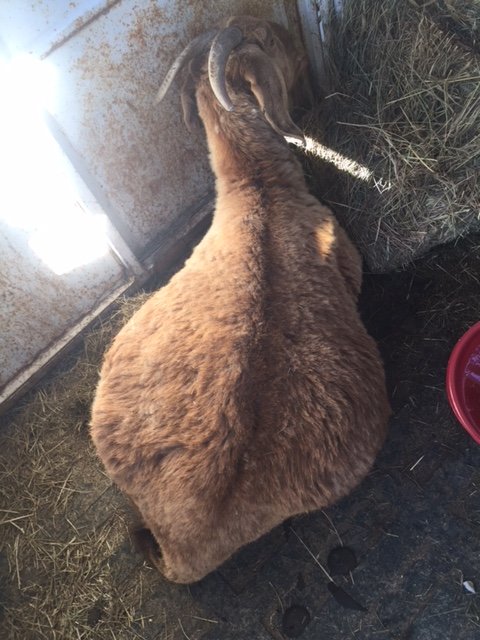 Sorry to hear I hope she pulls through. How far along was she in her pregnancy?

My best educated guess is 4-6 weeks from being due. However, I was only given a vague time frame "oh maybe a month, or month and a half ago" back in January for an exposed date. So I expected her to kid in April since she hasn't come in heat since I've had her.

Sorry you're going through this

she passes everything safely.

Big hug for you and your girl. Please keep us posted on how she is doing. Praying for the best.

that she passed whats in her belly and bounces back from this without any lasting issues.

That is such a shame AC, but it sure is good ya caught it and had the whereabouts to get her seen asap. After terminating the pregnancy....I sure hope she can recover without any lasting affects. I really appreciate ya sharing this so there is awareness about it.

sorry to hear this