In Memory of Trip

January 24, 2015 a fluffy Great Pyrenees puppy came into our lives. We had bought 8 acres with a doublewide on it in Lindale, Texas, to be close to our daughter and family. We were about to move and I had been thinking about getting another Great Pyrenees for our new farm. A man walked into my husband's place of work with a Great Pyrenees puppy for sale, my husband bought him and sent the man to our house to hand me the puppy. Of course I was thrilled.

I lost no time introducing the new puppy to Parker, the Great Dane and Labrador cross, and Polly the Australian Shepherd. Play time! 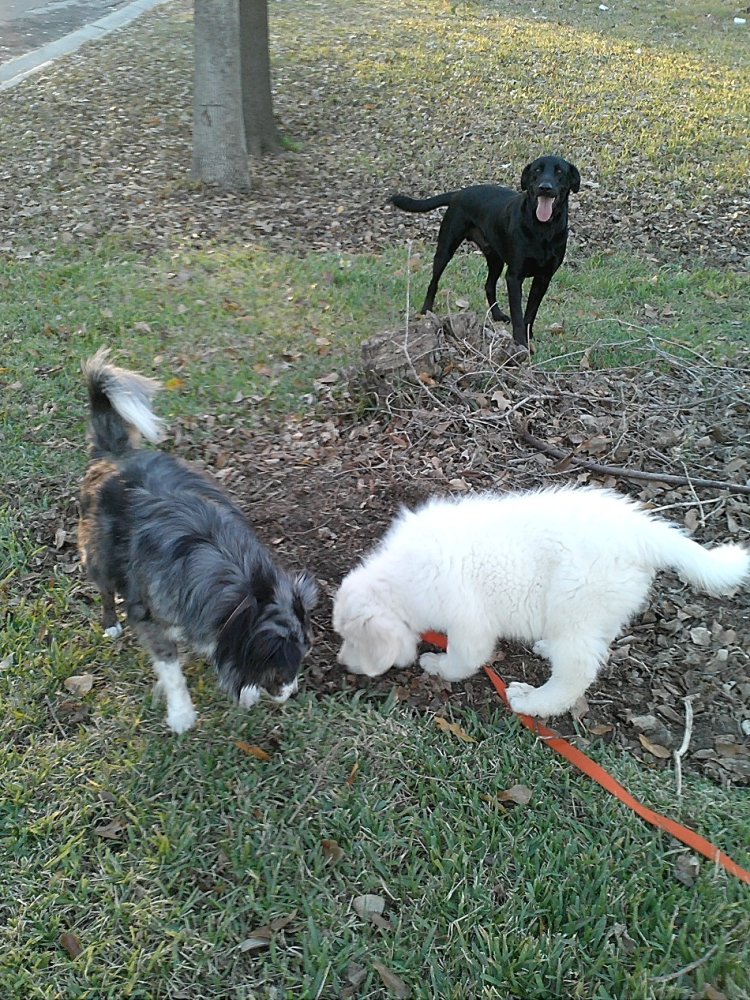 This was quite a big day for a puppy and he took a nap on the kitchen floor while I cooked supper. 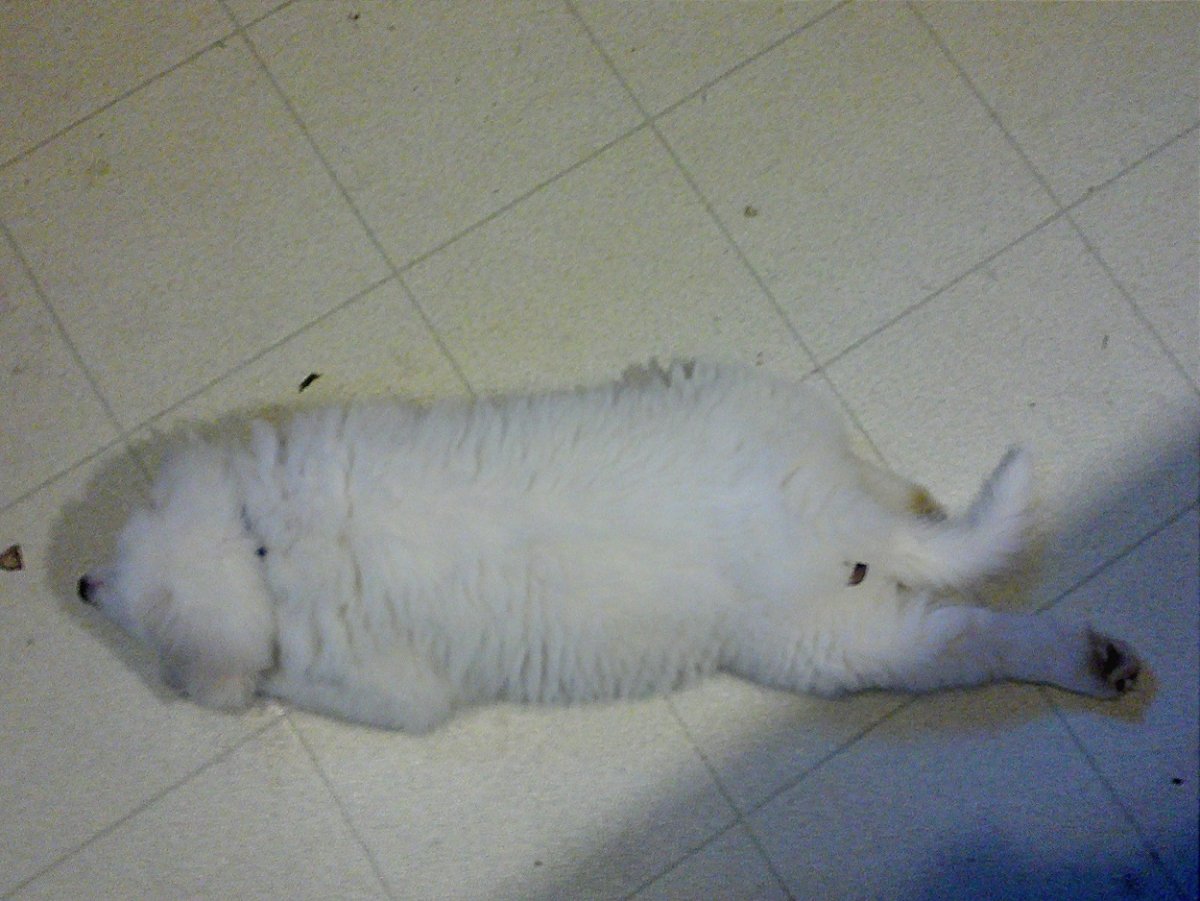 After a bit, he woke up and told me he had to go outside to potty. Off to a good start. 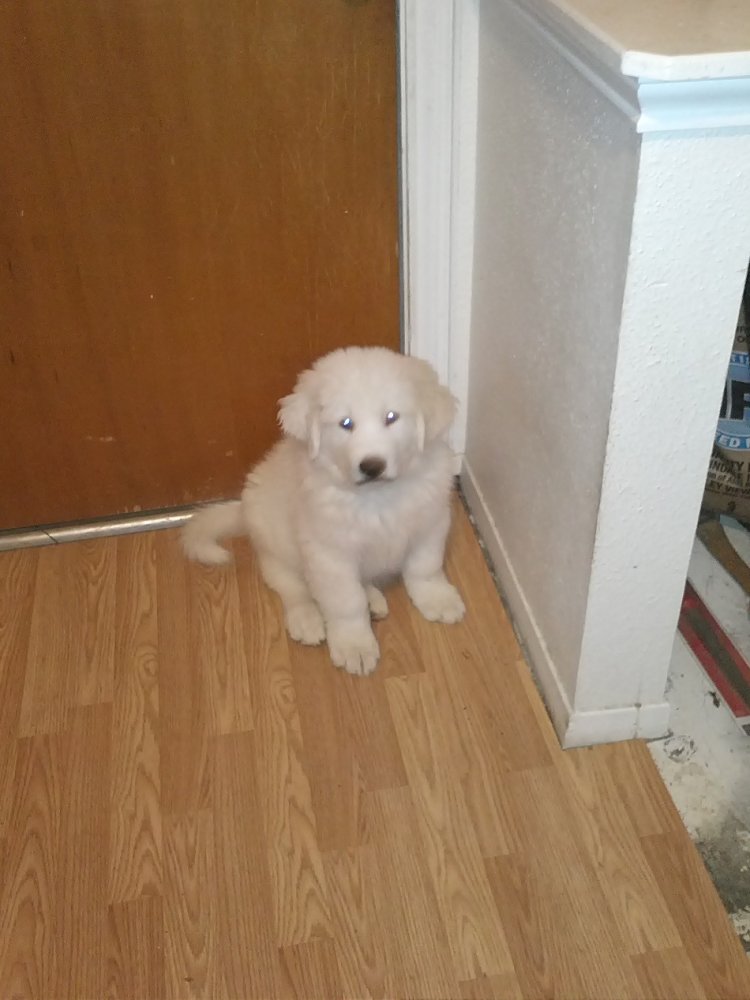 I named him Trip. The new house wasn't quite ready to move into, I had another 3 weeks worth of work to do. Our other Great Pyrenees, a female named Paris, didn't like the new puppy and attacked him. So for his safety, he had to go in the chicken run, with the chickens closed up in the coop. Finally the big day came, we moved February 14, 2015, our 19th wedding anniversary. Eleven days later, it snowed. The dogs had a blast playing in the snow. Life on the farm was good. Trip played King Of The Trailer. 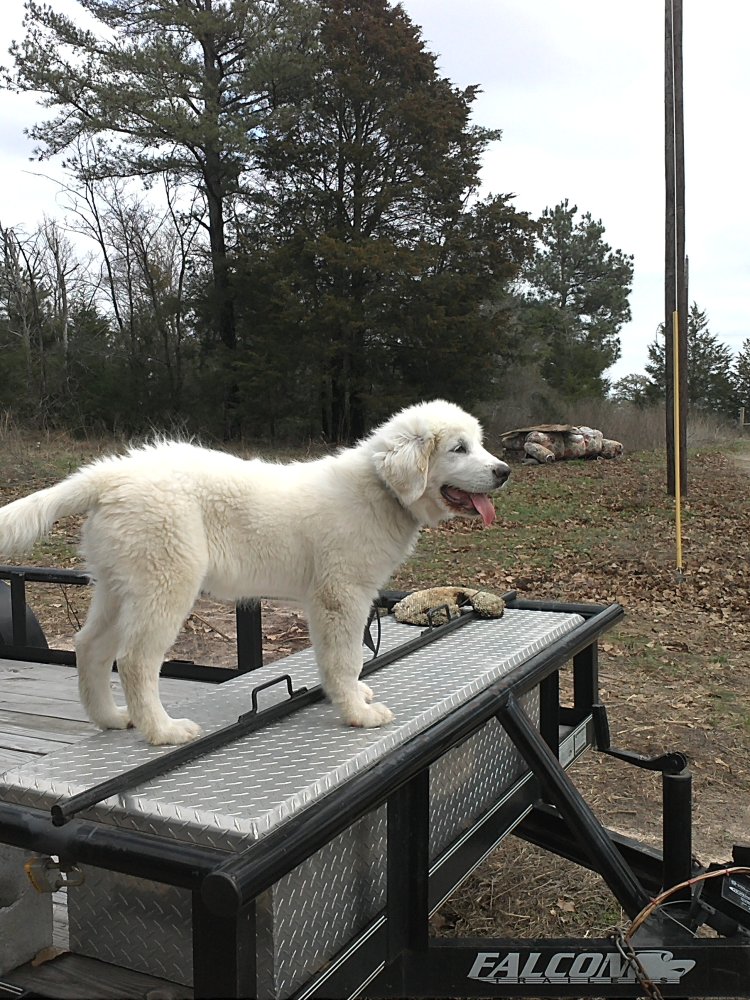 He played with Polly and Parker. 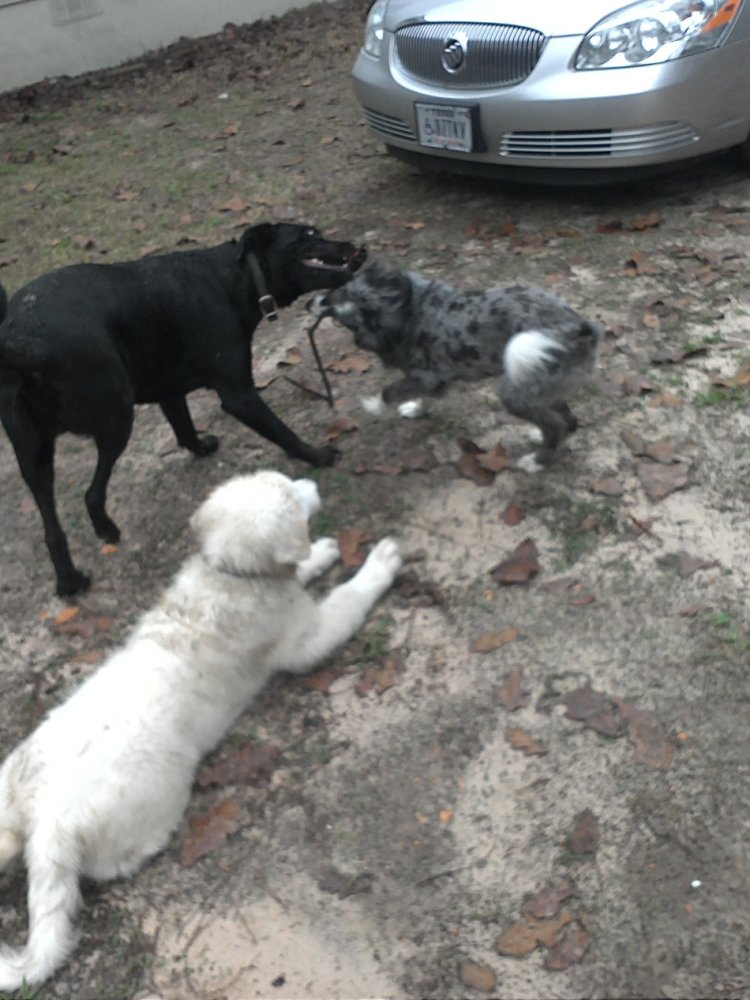 After a good romp and playing hard, two good buddies collapsed and rested. 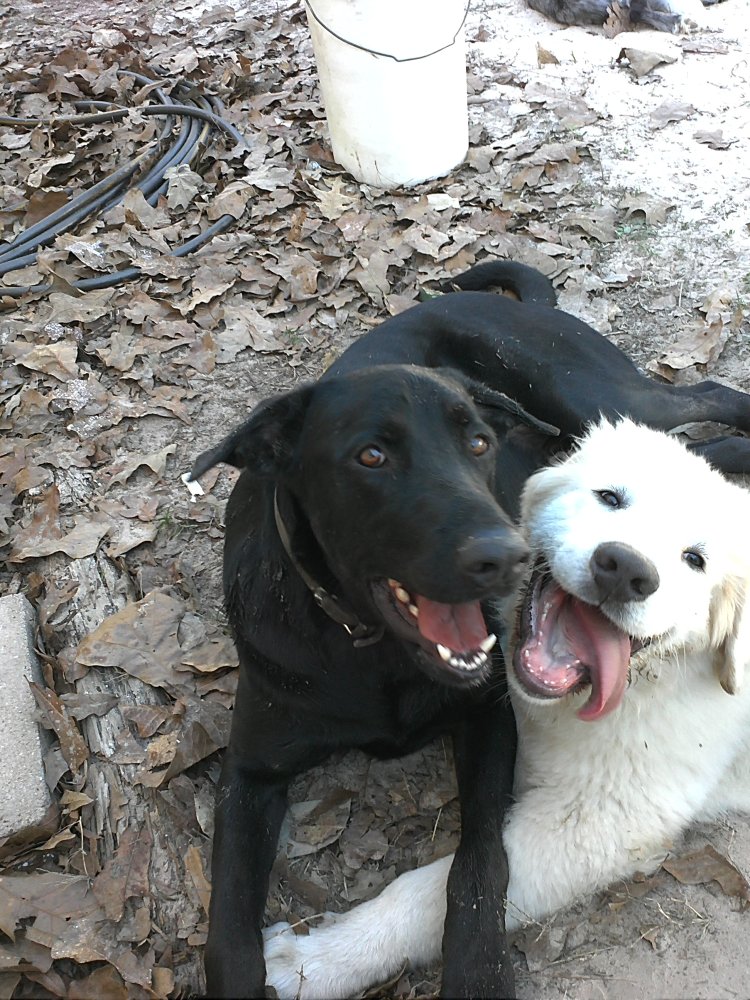 Time went on and Trip was growing up. He got chicken lessons. 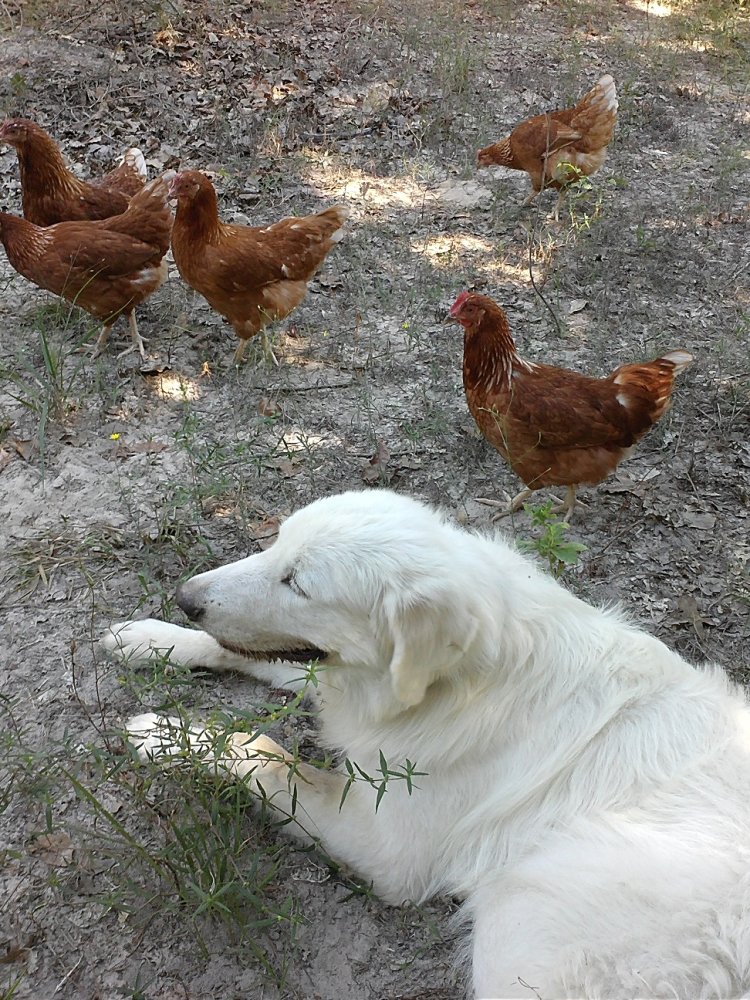 Anything we did, we always had help. We started building a Hawg Hut for incoming piglets. We were about to raise our own pork, meat for the freezer! Of course Trip and Parker helped. The pigs arrived, Trip wasn't too sure about that. He had to check them out. They passed inspection, then he ignored them.

Trip was about a year and a half old when I got my first sheep. He was excited, obviously I brought him new play toys! He stalked them up and down the fence line. I yelled at him and scolded. I took him in their pasture on a leash and he hit the end of the leash, knocking me flat on my back, with a big slobbering dog standing over me, wondering why I wanted to lay down in the dirt when there were sheep to chase! It took months of patience and training, after all, he was half grown before he ever laid eyes on a sheep. In time, Trip became a sheep guardian. Because he didn't start out his puppy life with sheep, he never really bonded with them, preferring to jump the fence to come to the house and see what we were doing. Whey hang out with sheep when we were doing much more interesting things? 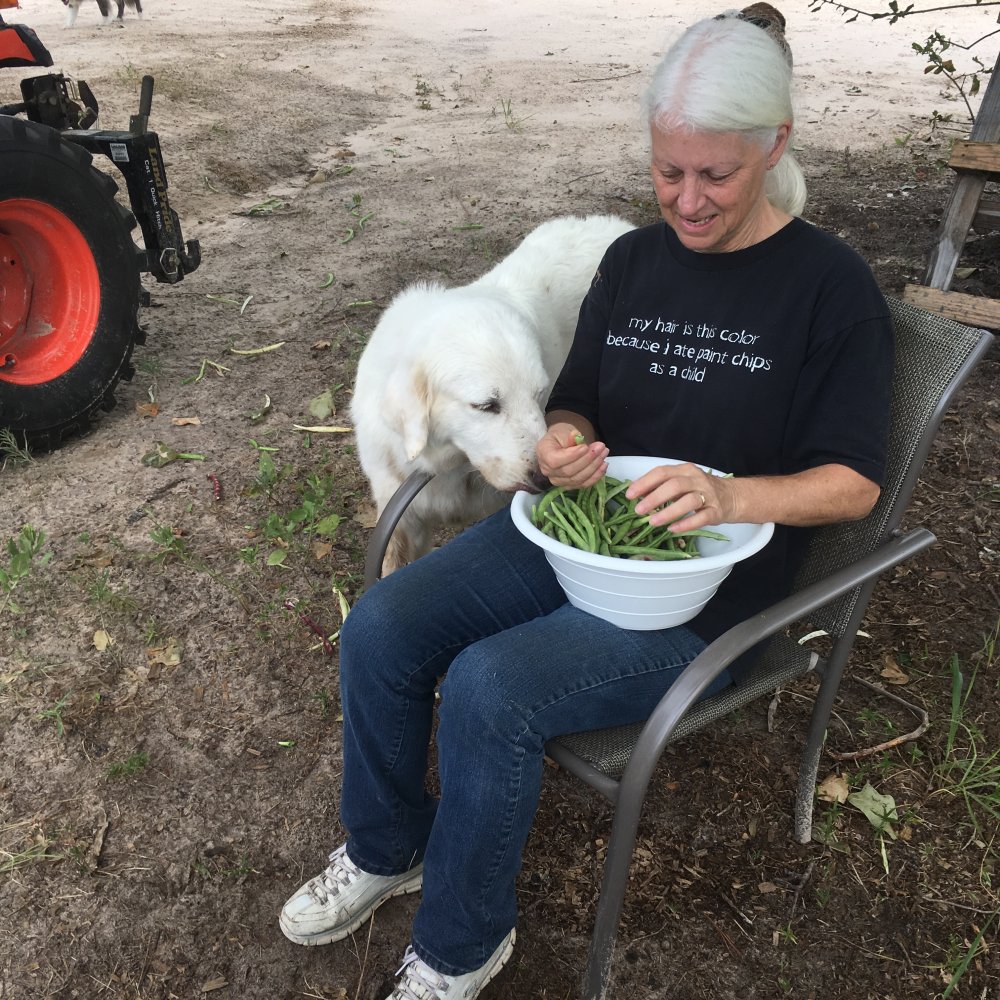 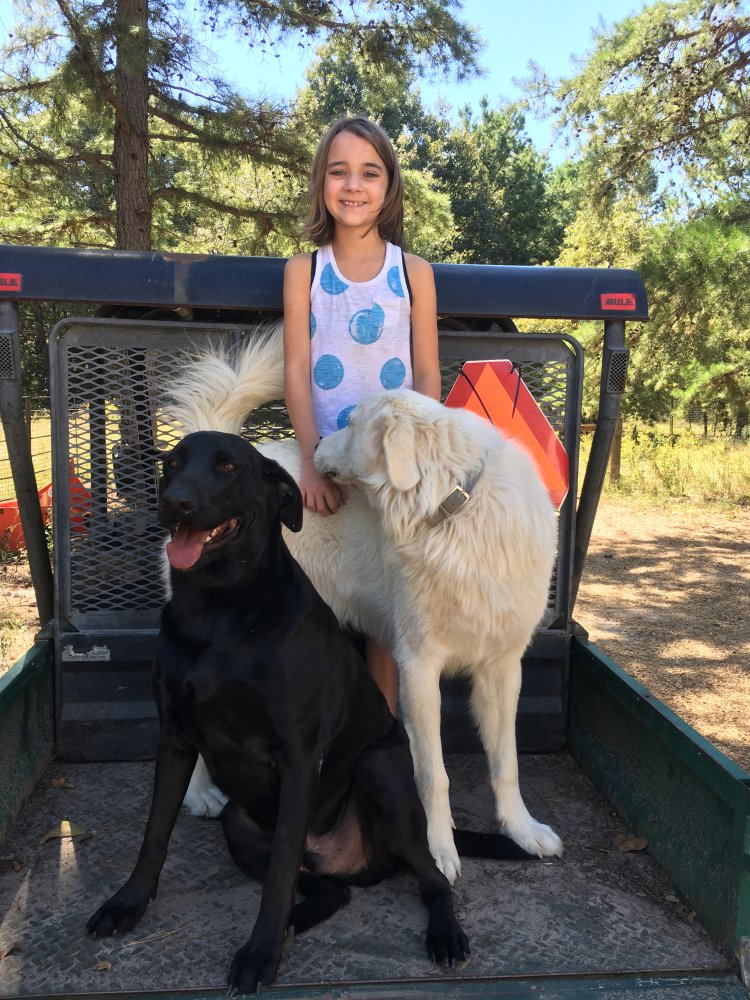 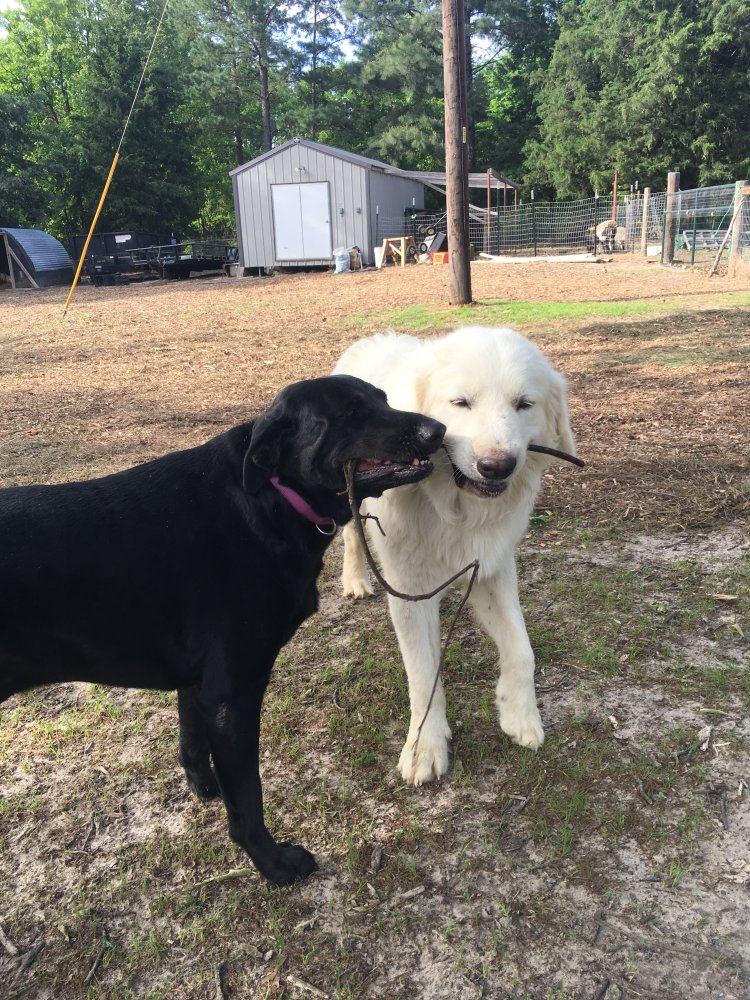 Life was good on the farm for Trip. Most of the time he was fine with poultry, then for reasons known only to him, he would go off track and put them on his menu. I found him one day with a half eaten muscovy duck. As I approached, he lunged at me snarling, protecting his kill. When a 100 pound dog snarls and lunges at you, it is no laughing matter. I could not let this pass. I snatched up a 4' pine limb laying on the ground and proceeded to beat the crap out of him. Trip stood his ground, snarling, until he figured out I wasn't backing down, then he broke and ran. I chased him, whalloping him with the pine limb, until he out ran me. I picked up his kill and disposed of the duck.

Quite a few times over the years, he'd be fine with poultry, then decide one would make a fine meal. Never did break him of that, so had to be careful of free ranging the chickens. If they were in a coop, he'd guard them with his life. If they were free ranging, he thought that he deserved one or two or a half dozen for all his hard work, ensuring their safety from predators. All except him of course.

In September of 2017, our Australian Shepherd Polly, died in my arms. We were grief stricken, but never expected such a reaction from Trip. He didn't understand why his friend wouldn't get up. He nose bumped her again and again, he tried pulling her fur with his teeth, but nothing he did got her up to play with him. He finally laid down by her while we dug her grave. 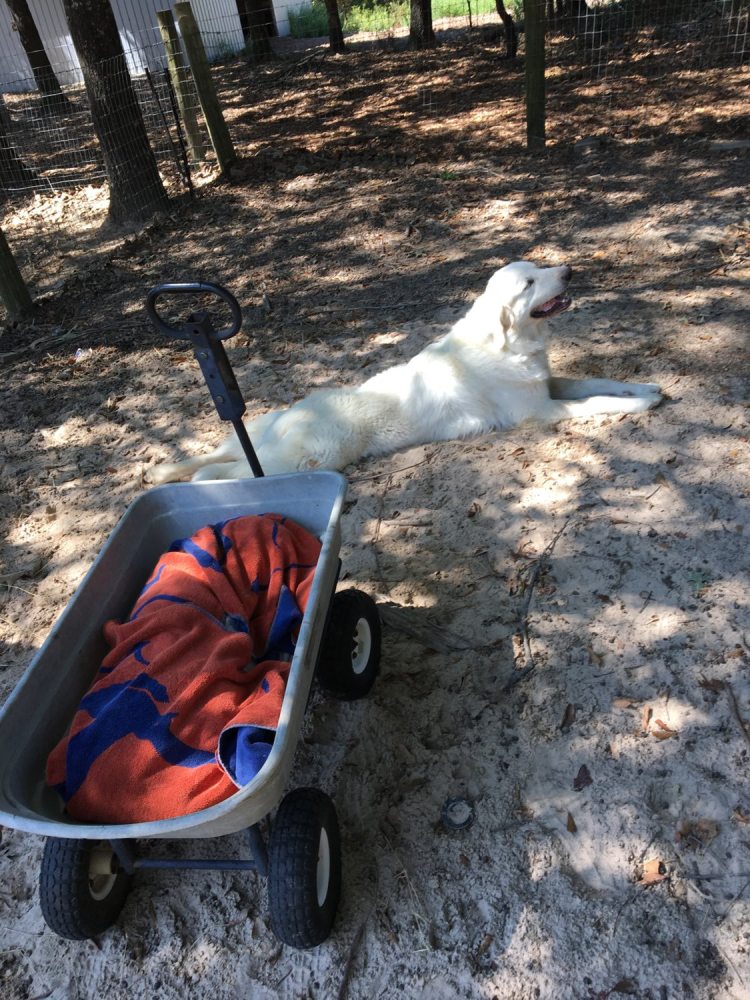 Then in July of 2018, Trip lost another friend, Parker. When we loaded Parker up in the truck to take him to the vet, Trip tried to jump in with him. I told him we'd bring his friend back to him, but Trip must have known something we didn't. Parker had cancer and his insides were eaten up. The vet put him down and we brought him home. Trip carefully sniffed his friend and looked at us with sad eyes.

Parker had always been there for Trip, but now he was gone. 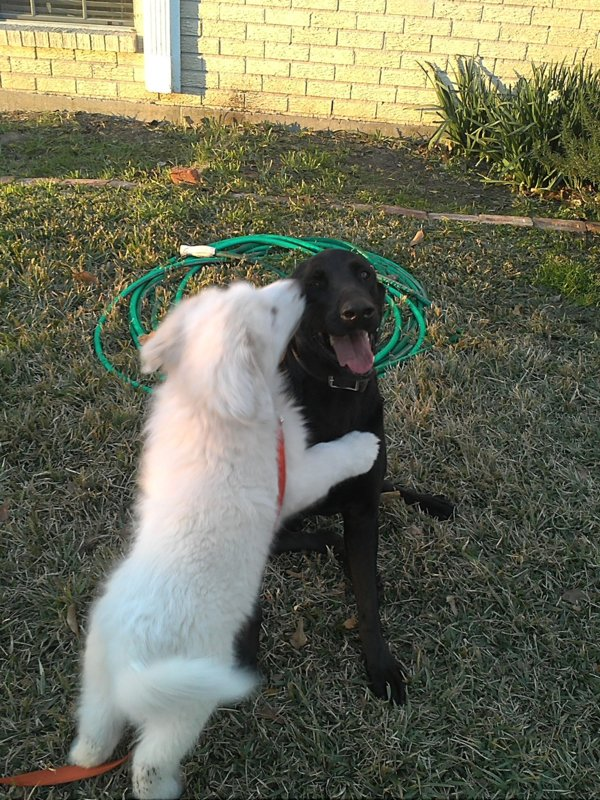 Trip took it all in stride, teaching the puppies their places-he was King.

Over the years, Trip saw the addition of two more granddaughters. He loved the babies and was very protective of them. They could maul him all they wanted, pull fur, sit on him and crawl all over him. He adored them.

Trip jumped fences. He jumped out to chase off the coyotes, but soon found chasing those Devil Deer was way more fun. He'd be at the front gate when we got up and I'd let him in. There was nothing I could do to stop him, all the neighbors got to know him and would call me to let me know he was out again. Sometimes if we weren't home, they would stop and let him in the gate.

Trip lost his best friend in September of 2021 when my husband didn't come home from the hospital. Our world turned upside down. I sold the farm and moved to Trinity county to a house my son owned. I had to put Trip in a pen with Carson, to keep him off the highway. I'm waiting to close on my new farm.

A few days ago I saw that Trip wasn't eating much, so I tempted him with chicken, bread, cornbread and all sorts of treats. I took him to the vet. She ran tests, X-rays and showed me a huge distended belly, thickened intestines and said he could possibly have lymphoma. No way to know for sure unless she performed surgery and if she operated on him, she couldn't "fix" him, it looked like cancer and it was all over him. She said we were going to think positive and try to make him comfortable, maybe it was not cancer. She gave me medications and sent us home. Over the weekend, the truth became evident and I knew my dog was not going to get better. I cooked chicken and rice for him, his appetite was good, but by Tuesday morning, he refused to eat. I got him to eat a half of a piece of bread, then he backed away from it. I knew. I called the vet and took him in. I cried all the way to the vet's office, I cried in the vet's office as I cradled his big head and he drifted away. The medication she gave Trip stopped his heart, that big heart so full of love, that big heart that adored his people, that big heart that loved life so much, stopped.

What a gift Trip was. What precious memories I have of a cute fluffy puppy to a big white lion of a dog.
Goodbye Trip. Run and play with Polly, Paris, Parker and run to BJ for him to pet and love you. Run and play where dogs don't get cancer, life is perfect and all your friends are there.

I'm sooo sorry that you've had yet another reason to cry deeply. Hugs and love go out to you from afar.
W

So sorry to hear about Trip.

They always take a bit of our hearts when they go.

My sympathy for your loss.

So sorry for your loss.

I'm so very sorry Bay, really hard 12 months you have had.

... no words to express my sorrow for your loss ....I am so sorry Dana

Dang it, you made me cry. I'm so sorry for your loss and losses. Dog biscuits all around in memory of Trip. You've got one heck of a pack watching over you from heaven.

So sorry for your loss