I've appreciated the assistance I've received so far since joining BYH's, as well as the lambing journals others have posted, so I thought I'd introduce my flock - especially with my first lambs due in just over a week! I fully anticipate some frantic posts during the lambing process, so here are some pictures and corresponding sheep info as a downpayment for advice

The first pic is a rear-view of (from left) Freckles, Tammy and Nibbles. Nibbles is the little white Katahdin in the middle, who's between 4-6 years old and had quads last year. Unfortunately, due to my inexperience and tardiness in intervening, the first three (ewes) were all born malpresented (forehead first, one leg back), before Nibbles plopped out the last one by herself - a ram that was the sole survivor. The three ewes who perished were all beautiful variations of chocolate, tan and fawn, so I'm hoping for some nice colours this time - as well as a higher survival rate! She's due March 12th, and she's already pretty big in this picture taken with 5 months to go... so I'm thinking triplets or possibly quads again... The 3rd pic is her this summer just after weaning her ram, so you can see she looks more like a goat usually!

In the middle, the other white ewe is Tammy. She's border cheviotXDorperXKatahdin, I believe, but she's a really big girl. She's 4, so this is her third or 4th pregnancy, although her first with me. She's HUGE, and also my first due, on Feb. 24th. In this pic she has 3 weeks to go, so I'm thinking triplets again... She doesn't have much of an udder yet, but I THINK she's dropped in the last day or two, so I'm thinking she might be early, maybe mid-next week. I'm hoping she has a ewe lamb that I can keep.

On the left is Bonnie, AKA 'Bullet-Butt'. She's a rambouilletXsuffolk, and she's a huge girl, even when not pregnant. She's 6 years old, and this is her first pregnancy. Yes, a bit of a risk, but I'm hoping for the best. She's a wonderful friendly girl who loves a back scratch and will lean against me if she's ever uncomfortable, or if an unfamiliar person or dog is around. I'd love a ewe lab from Bonnie as well.

Here's my ram, Hamish. He's not quite a year old, so he bred my 8 ewes in October. He's from a Shropshire ram over a texel ewe, and while his father was a whopper ram, he hasn't turned out the biggest guy thus far... I'm not sure when rams are finished growing, but I don't foresee him getting a whole lot bigger. Oh well, it will be nice for my 5 first timers to be bred to a smaller ram. I hope to get a better ram in the fall, though it's not as if I cheaped out on this guy. I'm partial to Charrolais, but something texel-y would be nice too. At least he's a friendly guy, and evidently fairly virulent as at least 7 of my 8 ewes are quite clearly preggers. The 8th is Patty, a suffolkX who is due on her first birthday if the marker is correct. However, she's not super huge, and still 4 weeks off so I don't see lots of signs of pregnancy... we'll see in a couple weeks, I guess...

Actually we named him Hamish, b/c he has these sidelocks around his face, and when we first got him he looked Amish, so we went with Hamish

That looks like she is carrying a whole flock in there.

Hamish will grow quite a lot in his second year.......clearly the girls think he's big enough in any case.

You have pretty girls and Hamish is quite handsome. I wish you the very best on lambing. We lambed 15, lost 2. Last ewe today had twins. You sound like you will fit right in around here!

Alright, so here are a few more of my gals. These are the twins, who turn two on May 4th (Samba and Sabine), and this is their first lambing. I'm watching them closely, as Samba's had a few issues with acidosis (I think) throughout the pregnancy, and Sabine was separated for a month or so due to a suspected case of pinkeye. 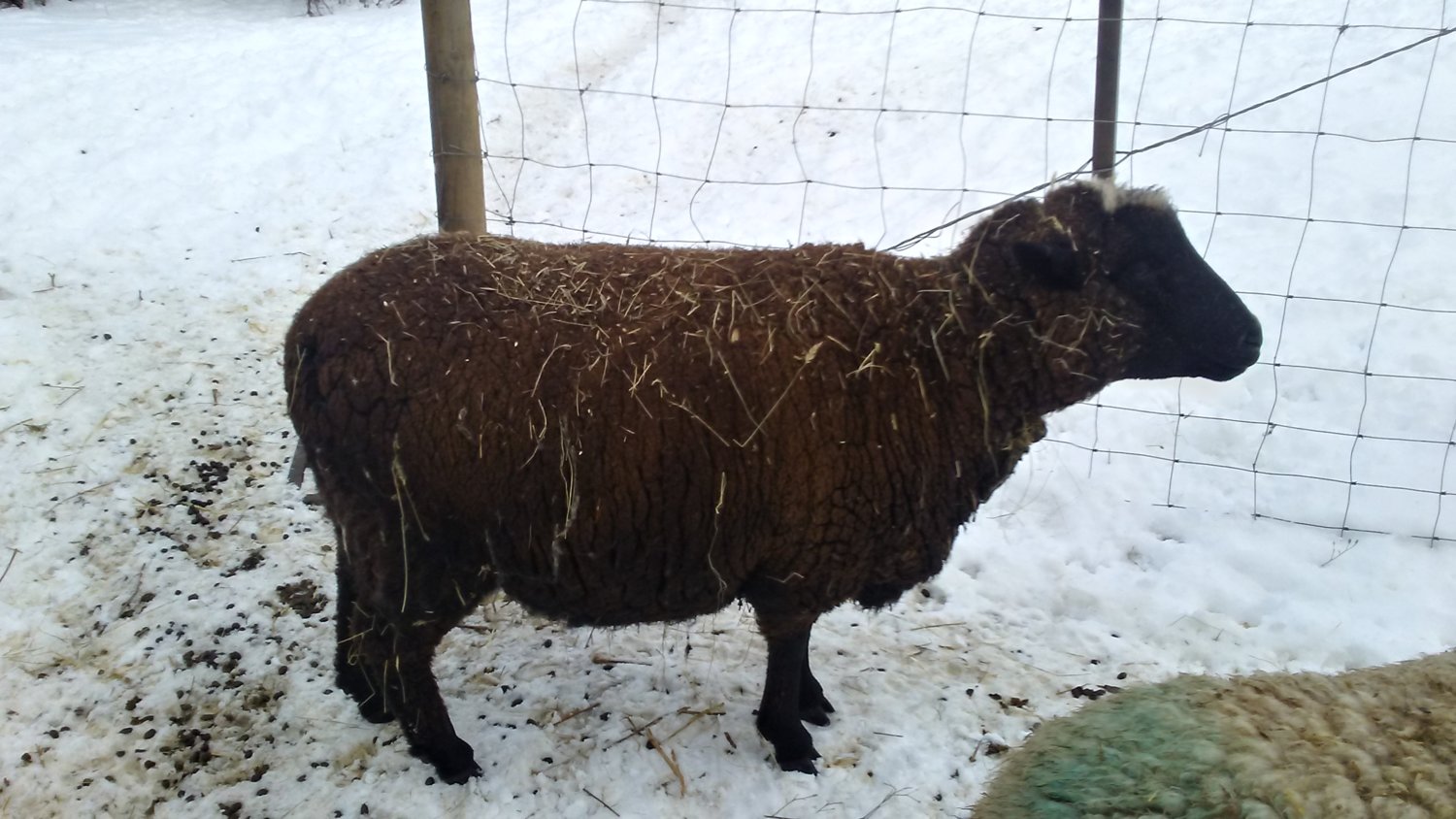 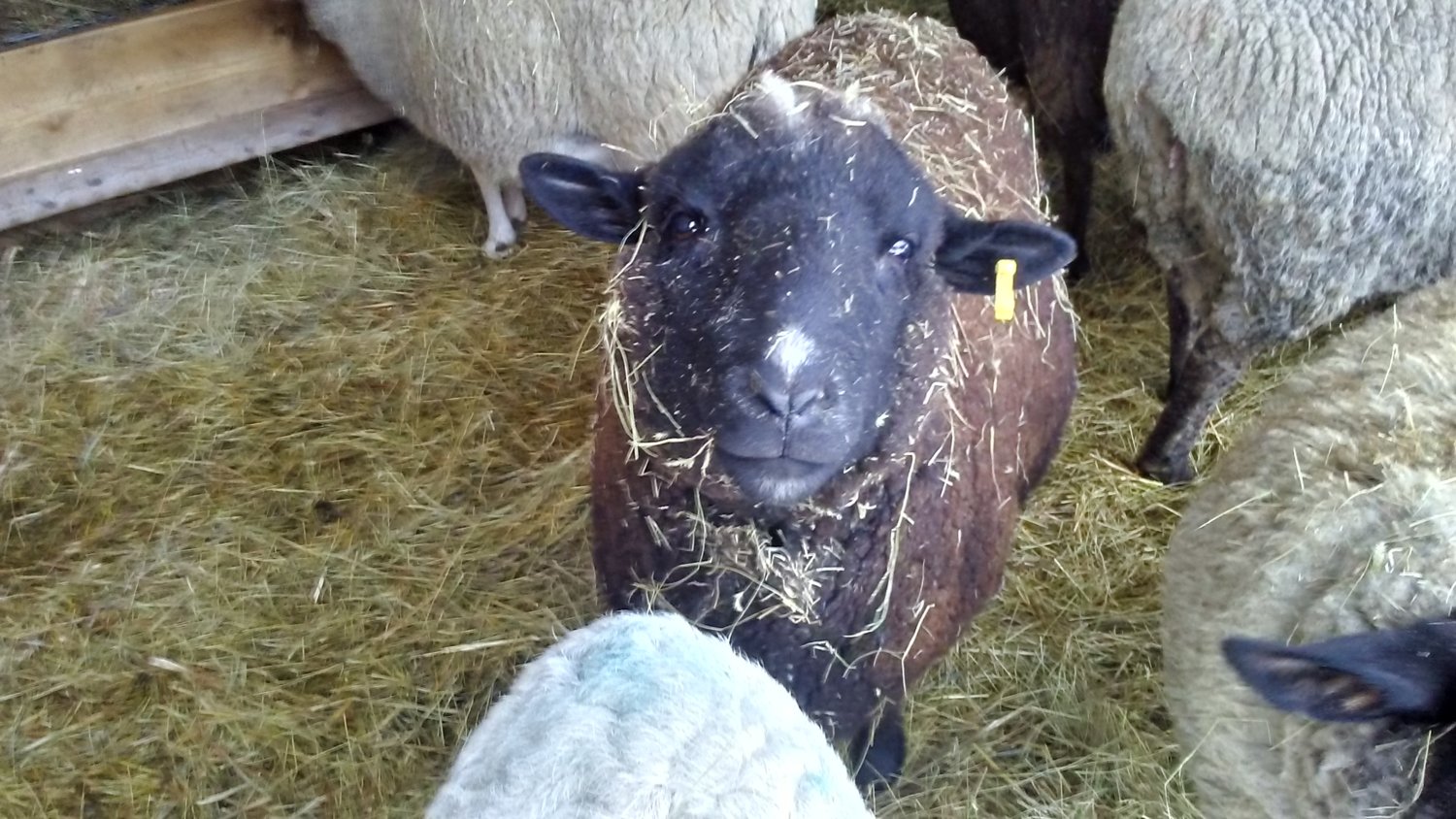 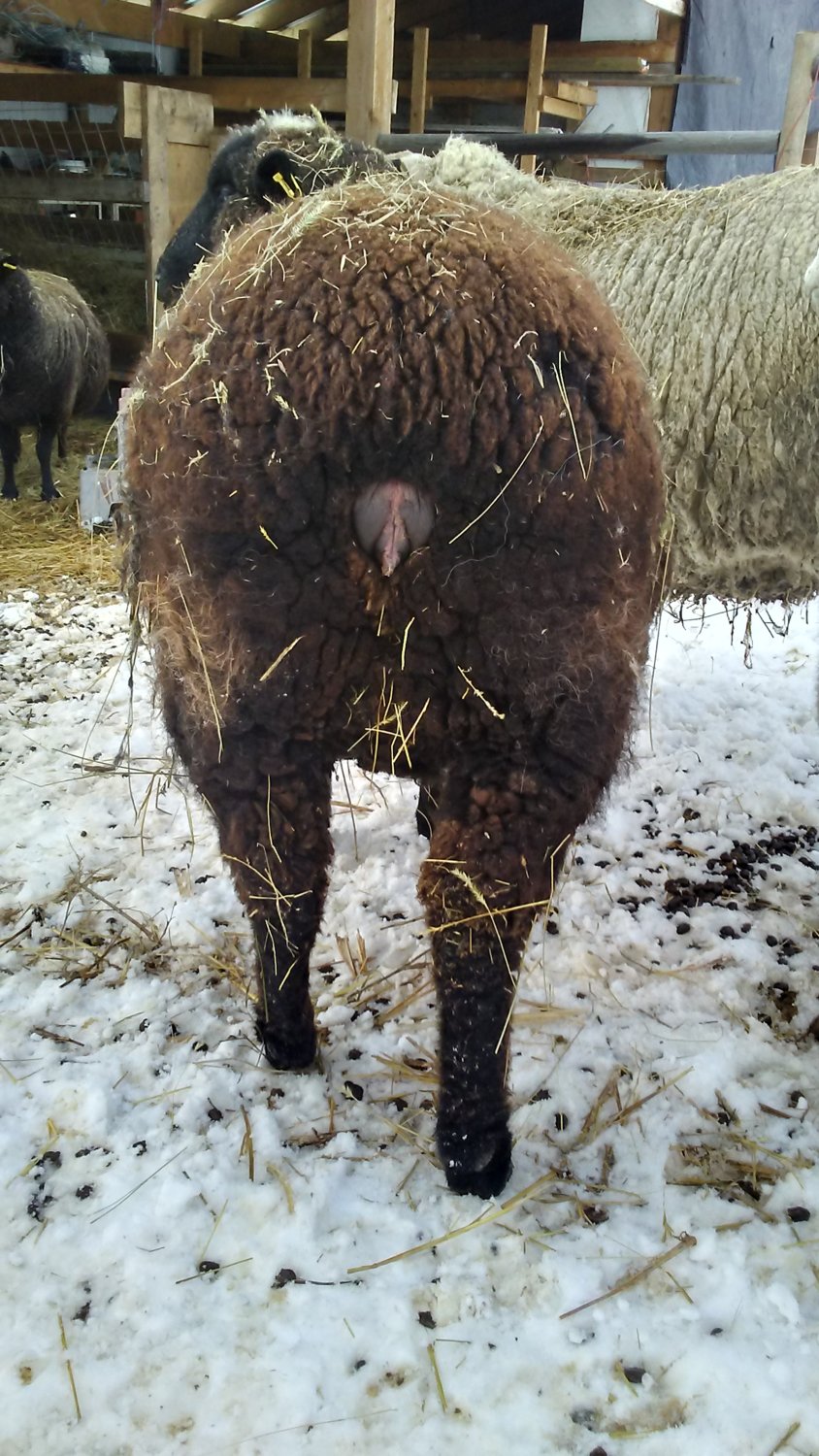 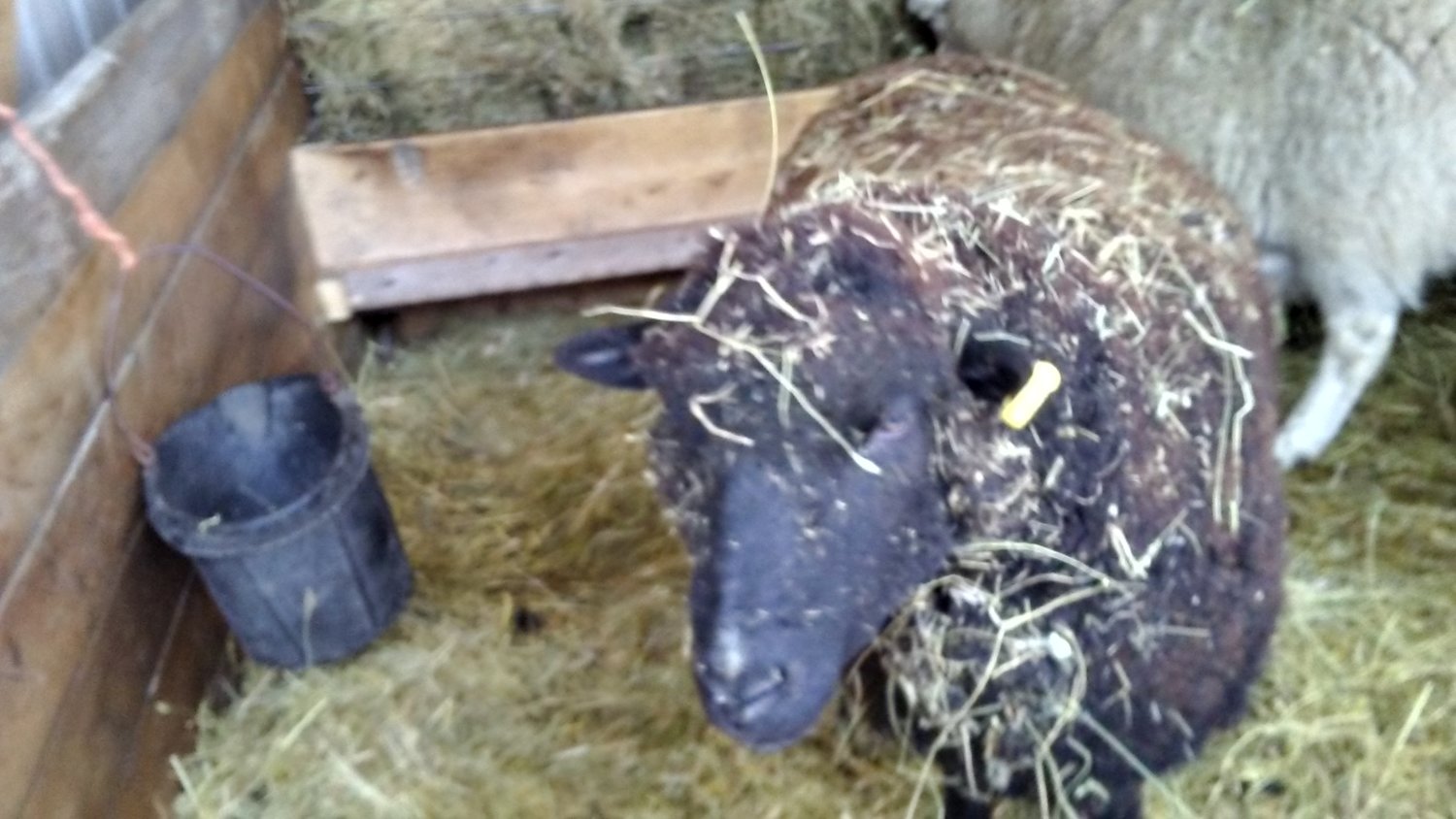 Samba, above, is much bigger, and not due until March 9th (21 days) so I'm hoping for twins. Both have limited udder development at this point. They were born on Star Wars day ('may the fourth be with you) and I think they look like little ewoks

Does anyone have any thoughts re: who looks further along? Samba's vulva is typically 'puffier' in appearance... 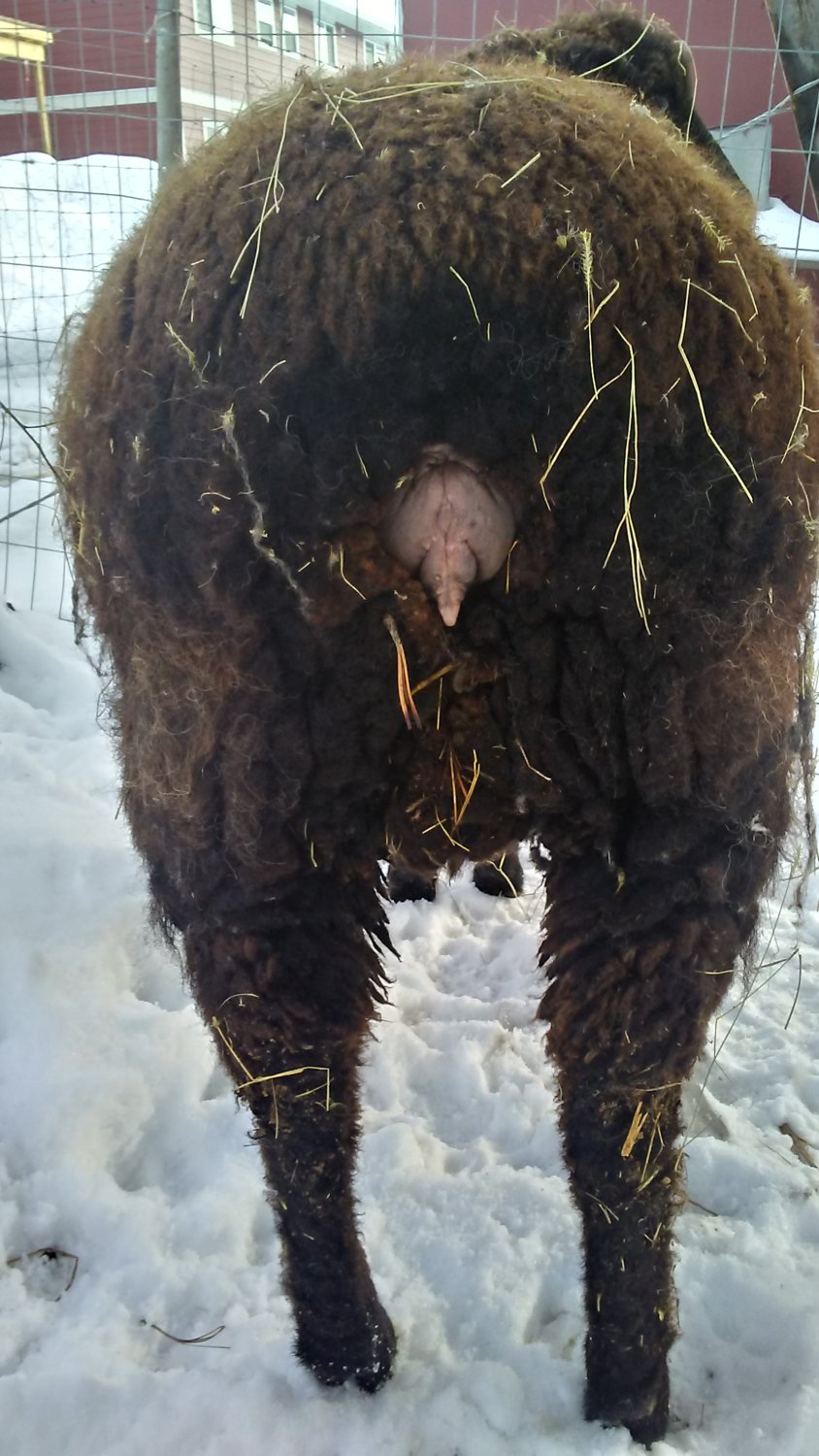 ShepherdO
PS - sorry for the poor picture quality. My phone is the pits...

I take pictures with my phone too, don't worry about it. Ewes will drive you crazy with bagging up, not bagging up, swollen Lady parts, and just plain acting weird. I have 2 ewes that look like they are squeezing a soccer ball between their hind legs and they will waddle around for WEEKS!

This is Patty - born on St. Patrick's day last year, and due on St. Patrick's day this year, on her 1st birthday - same day as my little Katahdin, Nibbles! She's obviously suffolk-ish, I wasn't sure if she was preggers, but today got down on the ground and I'm pretty sure I see the beginnings of an udder, so I'm pleased! Hamish has done his job well, looks like! In terms of feeding, I give her some extra grain b/c she's lambing as 'a lamb', so to speak. I've tried to keep the grain to a minimum with the ewes, although they're currently all getting about a lb of grain each per day at this point. I'm trying to find the balance between providing enough concentrates to prevent twin lamb, but not so much that I get (eg) prolapses or overbig lambs. 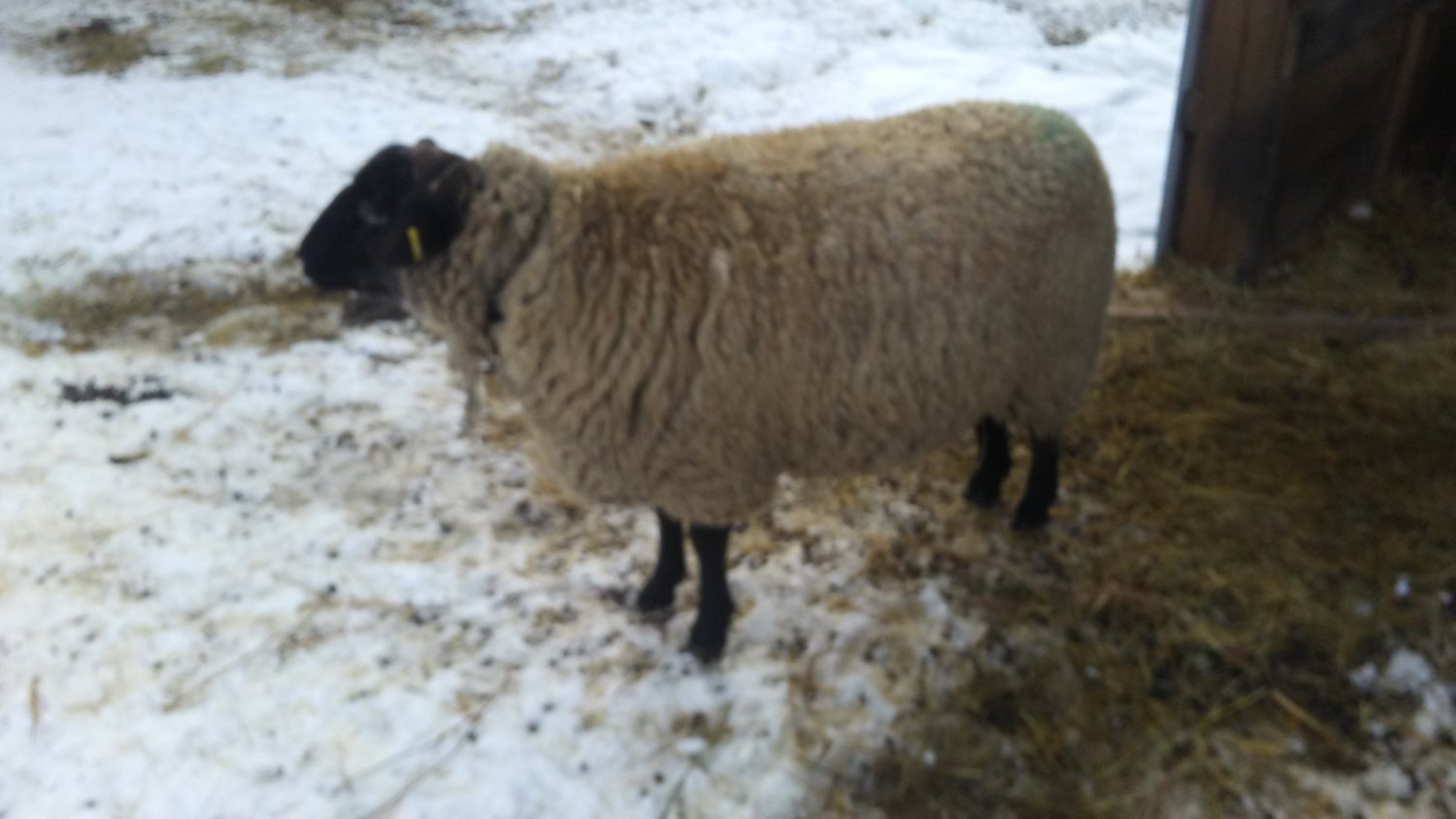 Below are Freckles and Bonnie, my suffolkXrambouillets. Super-duper friendly, both love a back rub. Bonnie's due first, in 15 days on March 3, 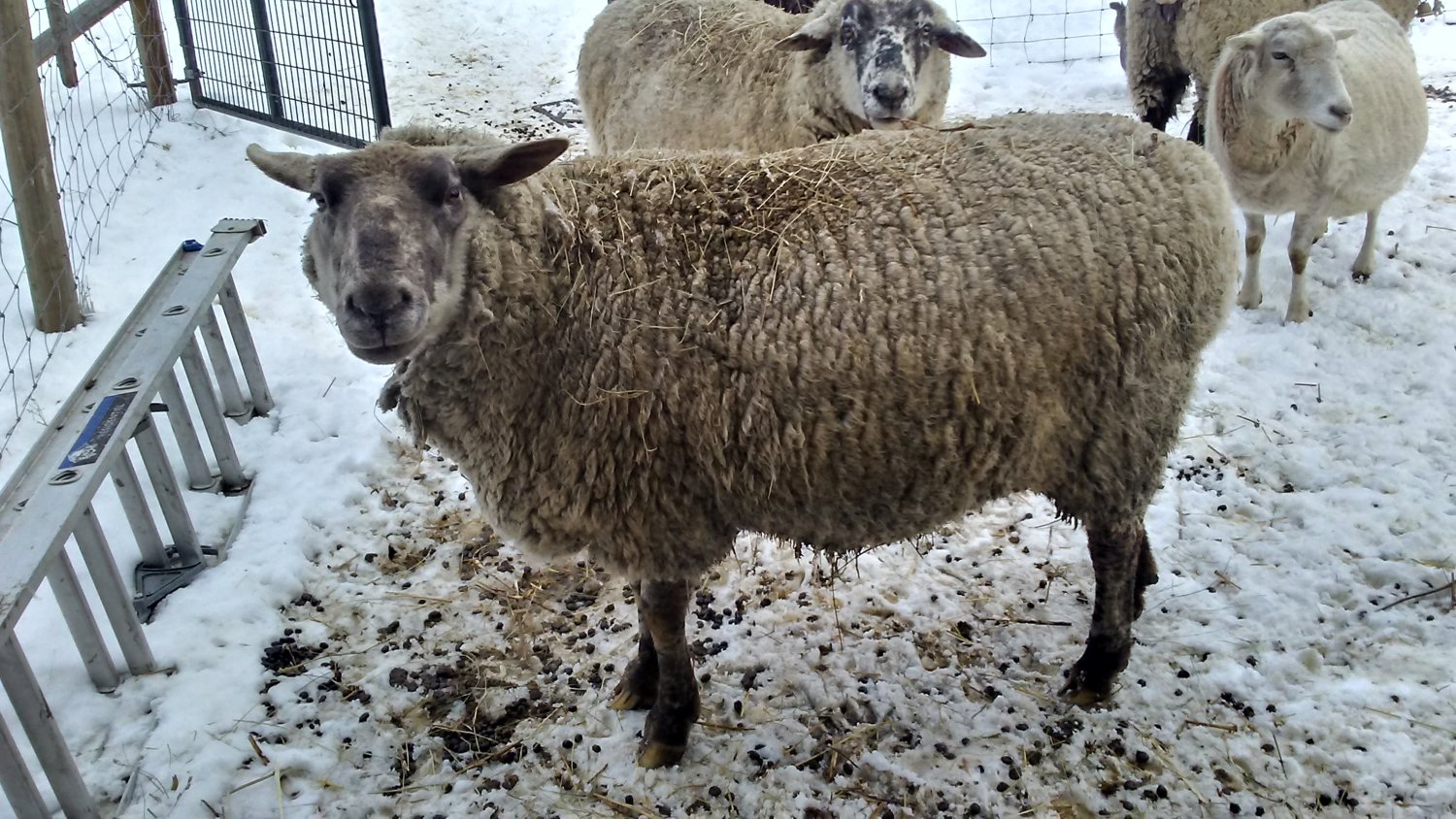 and definitely has a bigger udder than Freckles, who's due in 23 days on March 11. She's a blimp. 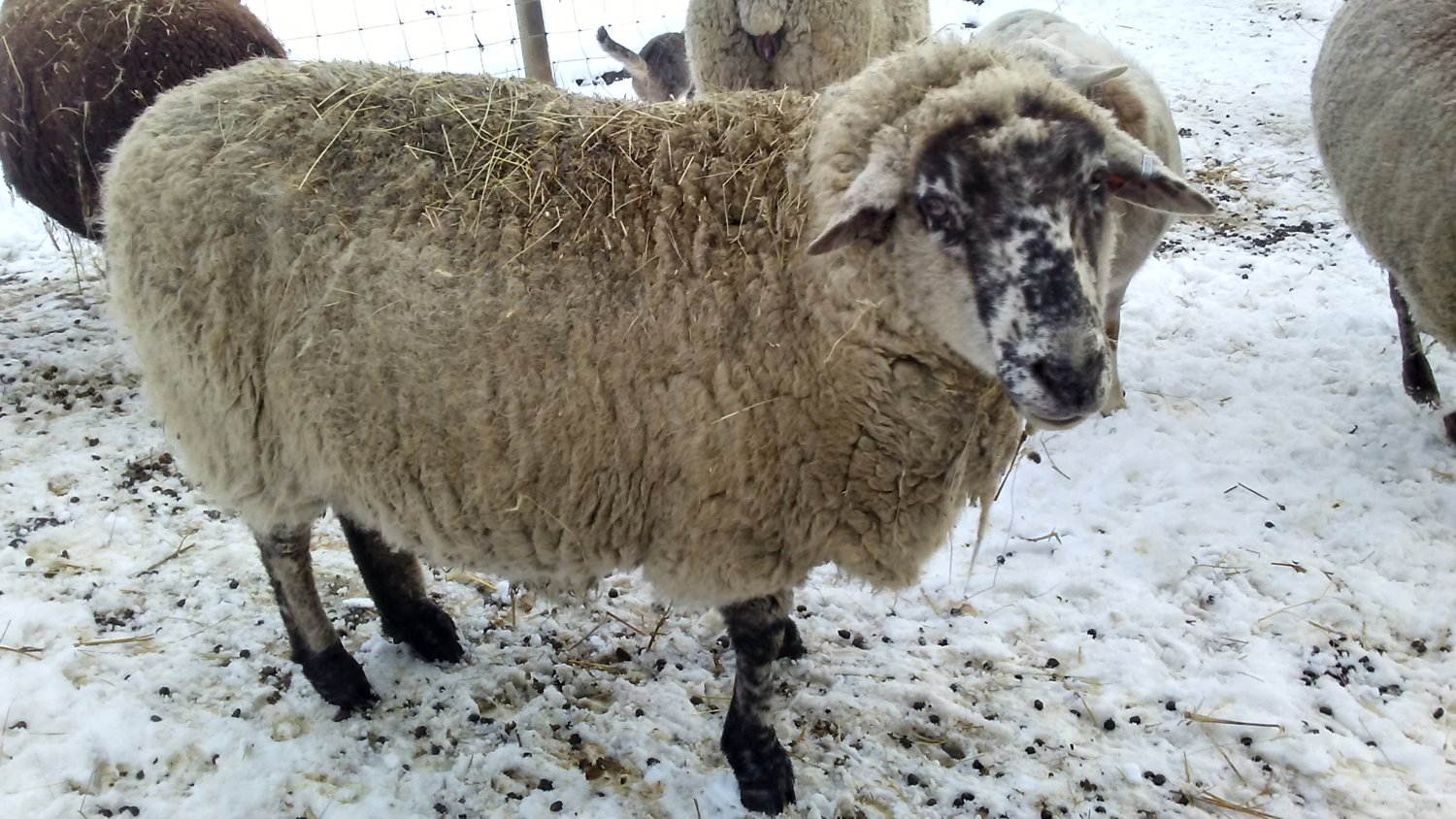 I'm a school teacher, which is definitely quite stressful at times (ie, MOST times...), and I've found it very therapeutic to start and end my days feeding the girls and getting to know them this past 8-9 months or so. My wife is a city girl who is happy to leave the outside stuff to myself and the kids, but I think I'm going to win her over when the baby lambs start coming

Boy do they look messy right now...the thaw is beginning to happen, and the 'poor man's concrete' (ie, frozen ground) we've had for the past 3 weeks is dissolving... meh...

Have you sheared them yet? that's why I opted for hair sheep, although a few of mine didn't shed out very well.

re: shearing, no, and I don't plan to. It's been so cold here (around -20 celsius) that I thought it might make things worse for them with the temperature shock.

I DID, believe it or not, crutch them as best I could a couple weeks back with my son. Man, it took forever, and didn't really work that well. I used several types of shears, including a pair of the real hand ones that I purchased. I obviously don't know how to sharpen them, b/c it was extremely ineffective. They're cleaner around the back end and around their udders than they were before, but it's definitely not a classic crutch.