Jumping the Moon Dairy - the next chapter

That makes me angry and it doesn't even affect me. At least you have a generator for things like this.

A year ago when they had that horrific fire in a little town called Paradise the utility company (PG&E) had told them that due to high winds that they may be without power. And then someone sitting in an office decided that the 50-60 MPH winds weren't strong enough to warrant that so they didn't do it, a line broke, and an entire town was lost, and some lives. PG&E has been found at fault and they have also declared bankruptcy. It's a mess and they are running scared. Of course there are thousands and thousands of lines and some of them are in some pretty rugged areas and not clear cut or maintained. Also of course idiots think that it is fun to shoot at transformers and other idiots get mad when PG&E asks to clear cut under power lines. But all of that being said, the technology does exist to shut off a circuit the minute it detects a break and not allow it to try and reset. It is the resetting that causes the spark, not the break. I am ok with an outage for a repair, that is only logical, but this outage for prevention crap has to stop.

Power outage round two is coming on Saturday night, supposed to last until noon on Monday. This is asinine.

Frame of the new barn is up. We were going to get the tarp on this Sunday but winds are supposed to 40-50 MPH so were are going to wait a week. I am absolutely exhausted, it seemed so much harder this time than last. Praying that I never have to do this again. Now it is time for a run to the dump and get cleaned up and ready for winter.

Gosh, Miss @babsbag! I wished we all lived closer to you. That way we could have an old fashioned barnraising and have it done in a day or two. Hang in there! We're all rooting for you!

PG&E must not take very good care of their transmission lines. For wind to snap lines and start fires, sounds like they need to strengthen their infrastructure. LOTS of places get hard, strong winds, yet seldom snap lines. Hang in there, in the madness.

Yeah, trenching through the mountains would be SO EASY!!!

Our Governor is a joke and praying that the recall comes to fruition. As far as PG&E...I read some interesting stuff about them and I guess that about 20 years ago they started putting the needs ($$$) of shareholders before maintenance and it hasn't bode well. There is also a law in CA that says if any equipment that belongs to a utility company is involved in a fire that company can be held responsible, even if negligence was not involved. That is just stupid. Power is out and will be until sometime tomorrow and then maybe again on Tuesday. Generators are so obnoxiously noisy, I hate the noise and it makes me grumpy.

Here is a picture of the barn frame. It is much higher than my old one. I wanted it a little longer and in order to go longer I had to go taller. So here it is. 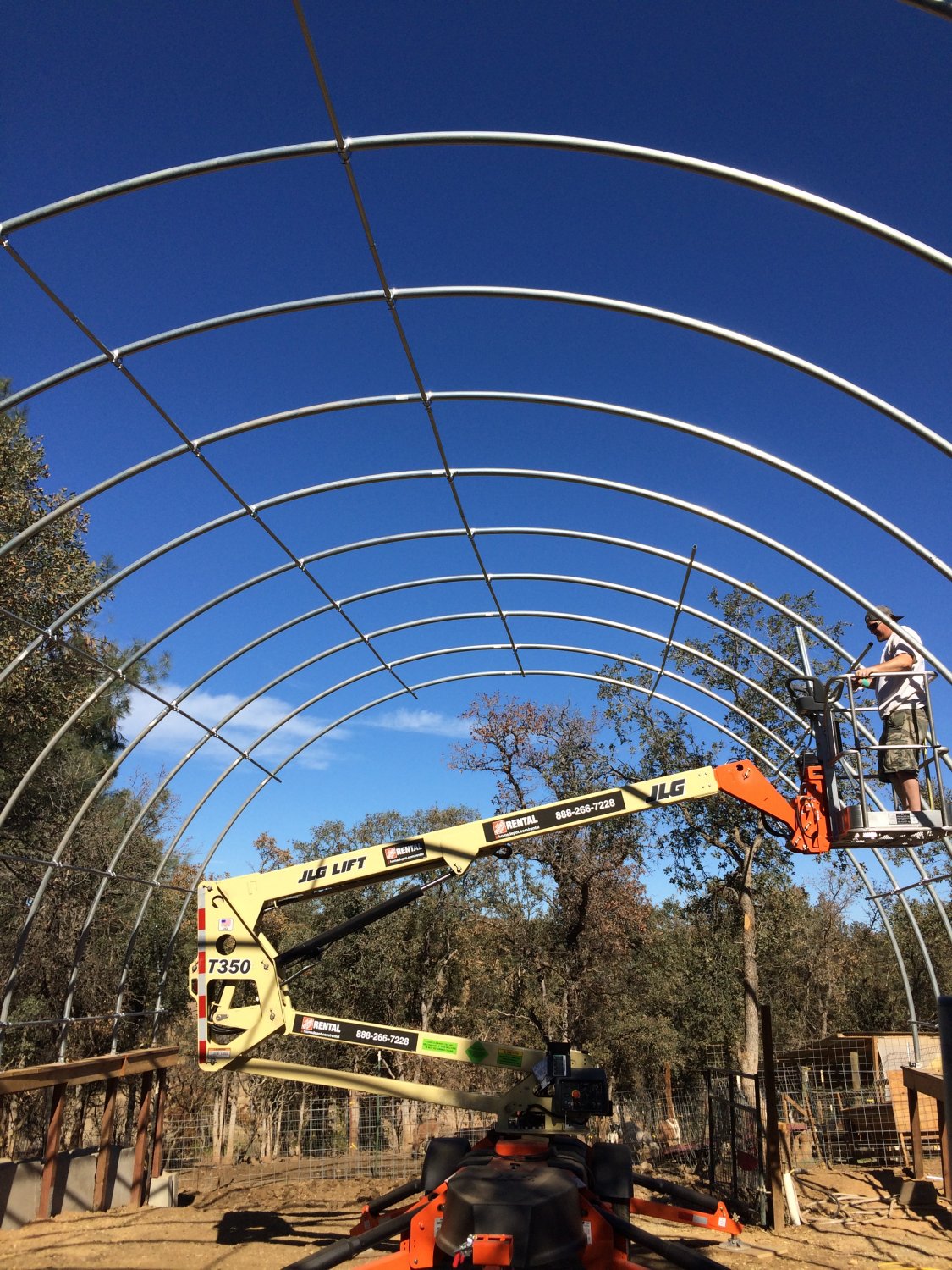 Awesome!! It's got to be a good feeling to see that going up!