Lambs ANY day!! How close is she? 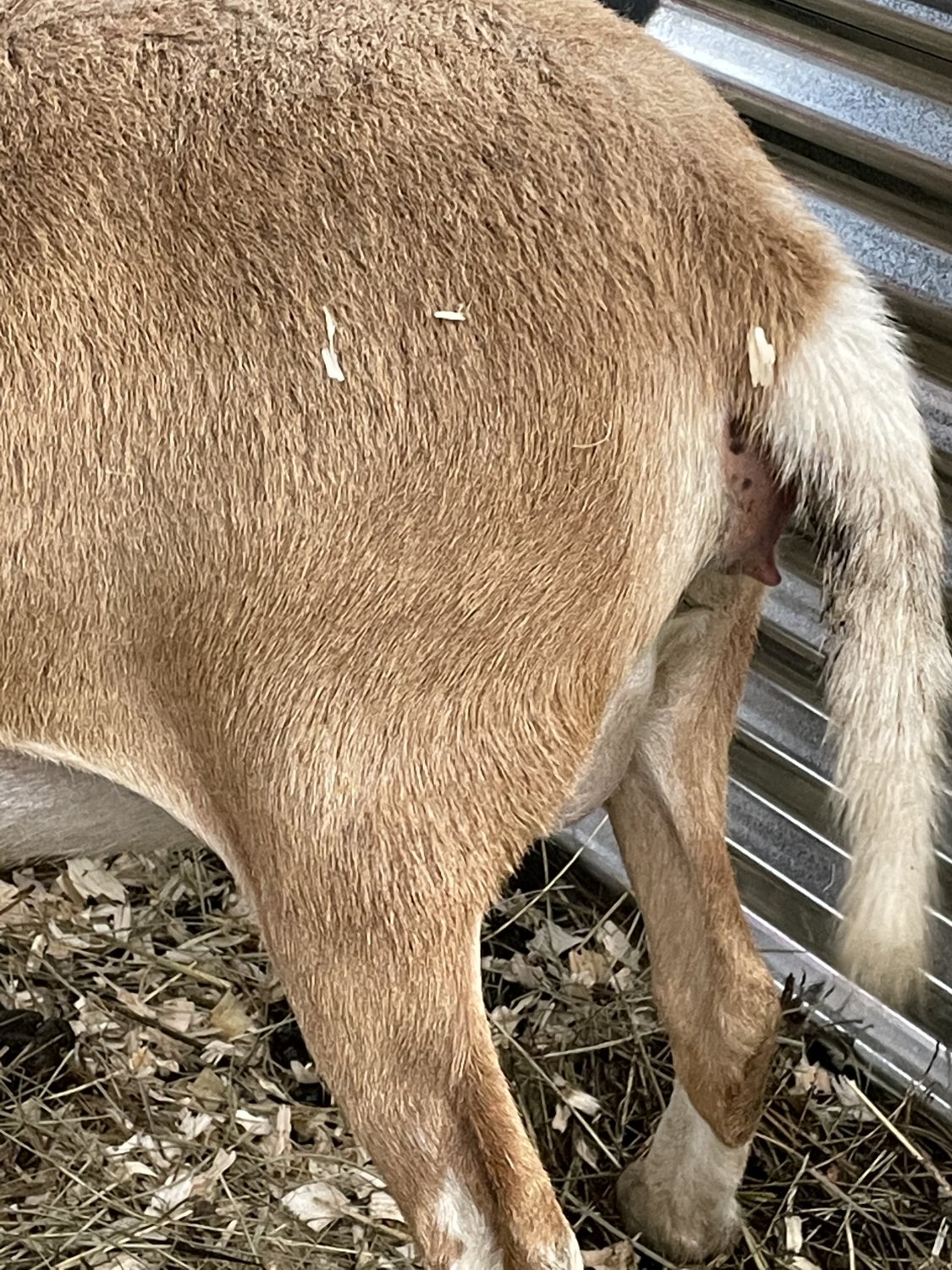 Now, the white ewe, Clover, my guess is only carrying a single. This was our first year with grass fed sheep and I’m not sure she has had access to the most beneficial pasture. So I don’t think she had the right nutrition for fertility.

Get a side view. Some ewes don’t spread out much, but their belly drops.

If you don’t have good pasture, you have to supplement with feed.

A few days before delivery the top of their hindquarters, on either side of the spine, gets real soft and sunken in.

You are guessing correct, nutrition affects fertility. Before breeding sheep, it is customary to move them to better pasture, feed them a balanced feed, increasing nutrition. It’s called flushing the ewes. I don’t know what the word flushing has to do with sheep nutrition, but that’s what it’s called.

Ha the guy with the buck said she will be due in February 7. She is not going to make it. Our due date is tomorrow.
Last edited: Jan 9, 2022

Show Sebright said:
Ha the guy with the duck said she will be due in February 7. She is not going to make it. Our due date is tomorrow.
Click to expand...

I’m confused. What guy with a duck?

Finnie said:
I’m confused. What guy with a duck?
Click to expand...

Buck. Sorry I typed it wrong

I figure 2 apiece. If our dairy goats had looked like this, they would have had trips or quads. LOL However, these White Dorper sheep are deep, wide, and heavy bodied normally. Not very tall, but excellent meat producers.

To me, the white ewe doesn't look bred at all. What is the latest date she would lamb? The red ewe looks more like she would lamb in February, so February 7 sounds about right. If these are first time ewes, they could easily have singles which is common in first fresheners. Udders can develop early or late in the pregnancy. 7088 had a big 5th year udder, but it did not fill until she lambed. 7041 should lamb any day through January 12 but also has a loose empty udder. She could fill 24 hours before lambing or even after she lambs. All ewes are different. If your ewes are first fresheners, they have to grow the udder before it can hold milk so in first fresheners you will see noticeable udder development halfway through the 5-month gestation.

I am not familiar with Katahdins in lamb though, so Baymule and Mike would be the ones to guess at Katahdin lambing dates. Katahdins are usually taller in the leg, and less thick than my Dorpers so may not show such thick body development as I expect to see in my sheep.

Flushing refers to the practice of giving the ewes extra nutrition before breeding. you can move them to a richer pasture or you can grain them. The addition of extra nutrition via richer pasture or grain will "flush" additional eggs from the ovaries so the breeding will produce more lambs. Twins in sheep and goats are each individual egg and sperm combinations, unlike human twins who are formed by one egg and one sperm spitting after conception. That is why you have different shapes and colors in twin lambs and kids.

When flushing your ewes put them on a small measure of grain - half a pound to one pound of grain per ewe for 2 months prior to exposing them to the ram. The ram also needs to be in excellent condition so that he releases large numbers of fertile sperm. This is because when breeding the ram can cover many ewes in one night. If he is not producing a lot of fertile sperm some ewes will only produce singles or may not conceive at all. I leave my ewes with the ram for at least a month to make sure they are all covered. I change the crayon color every 2 weeks to see if the ewe re-marks. Some people have thought their ewes were not fertile when it was the fault of the ram. That is why I give a ewe that does not take with the first ram a second chance with a second ram. Rams can go sterile, particularly in extremely hot weather.

Once the ewes are bred you should stop the grain since it will only add fat in the first 4 months of pregnancy. Fat ewes have more trouble lambing and produce heavier lambs that may have trouble fitting through the pelvis. About 5 days after the lambs arrive, they will be growing fast. You can add some grain to the ewes' ration to help with milk production. Grain will not be necessary if the ewes are on rich green pasture.
T

Still waiting.
I do think the white ewe is bred because she has bagged up a little.
Here’s a comparison of the brown ewe from Christmas Day to today (15 days later). I’m guessing she’ll have January lambs and that she was bred before she arrived to our homestead.

What is the latest date possible for breeding?
T

Ridgetop said:
What is the latest date possible for breeding?
Click to expand...

We took our big ram out November 29th. And separated out our smaller ram lamb yesterday. So…yesterday is the latest possible breeding date hahah.

So, you could expect lambs as late as April 23 from the large ram, and June 1 from the ram lamb. No worries then. Good luck and let us know when the happy day arrives.
You must log in or register to reply here.
Share:
Reddit Pinterest Tumblr WhatsApp Email Share Link