Use radiant heat barrier over the roof decking, under the metal roofing. It will cut the heat by 10 to 15 degrees. It will be a bunny lifesaver. It is awesome stuff!

I guess it's been a while since I posted. Today is yardwork day so I'm going to try to take pictures to post.

Munchkin is doing well, he has two bottom teeth that appear to be fully in now, and has gone back to sleeping through the night. He is learning to eat solids, mostly purees but we've been giving him some finger food too. He is a happy boy and getting super strong. Still not wanting to crawl, he might go straight to walking. He can pull himself up to standing/leaning on something from a sitting position.

I still don't really have a garden in, the raised beds haven't been built and the fence posts are still not cemented. Getting frustrating but trying to make the best of it. I have two mangos I am growing from seed that I am excited about, plus I repotted many of my avocados. 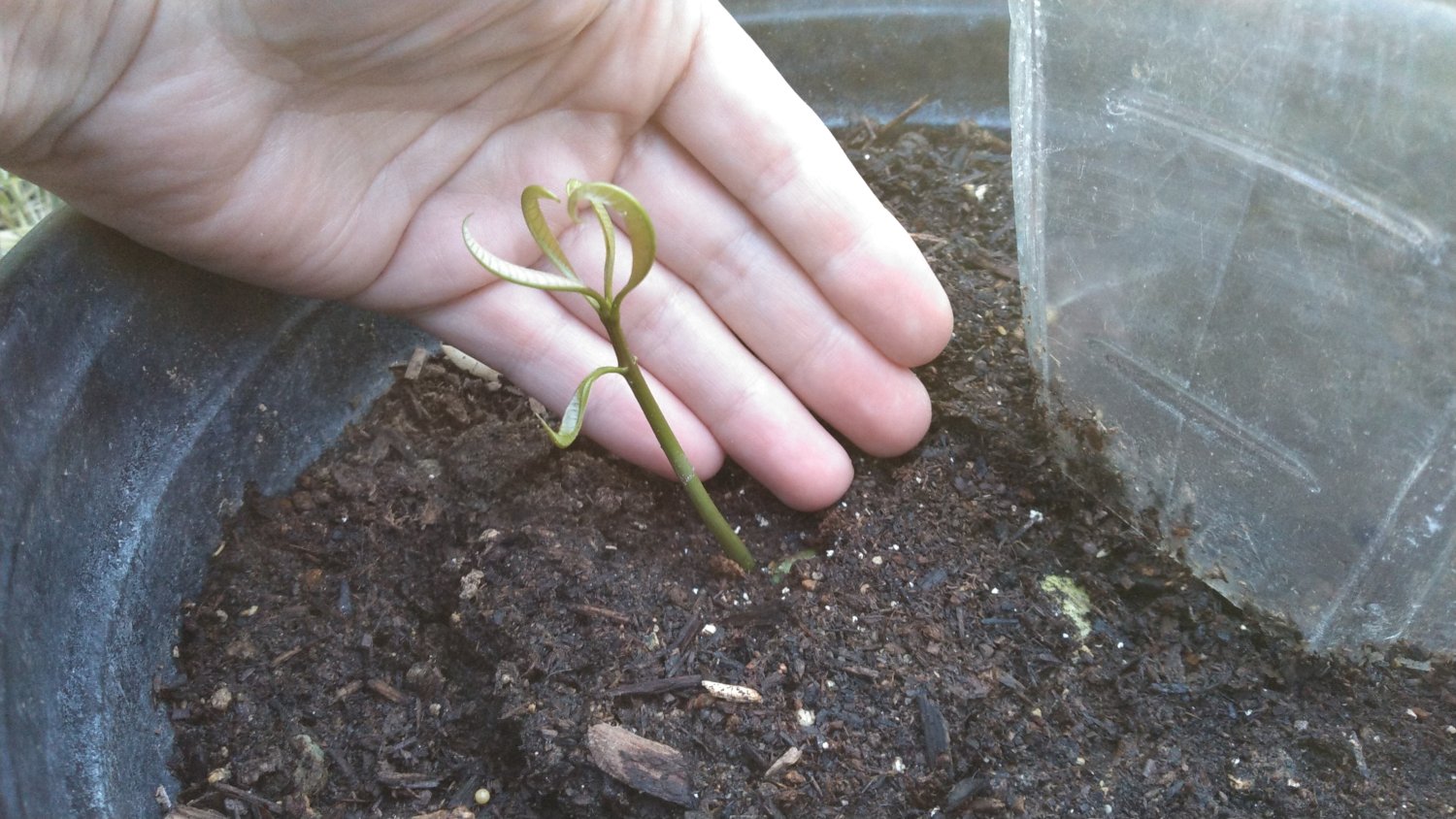 We had something trying to get my chicken eggs and set out the live trap. Ended up catching a skunk, on a work day after hubby has already left for the day. I didn't feel confident to kill it with one shot and couldn't find someone to come shoot it so I pulled the trapped skunk into the shade and it had to wait all day until hubby returned. 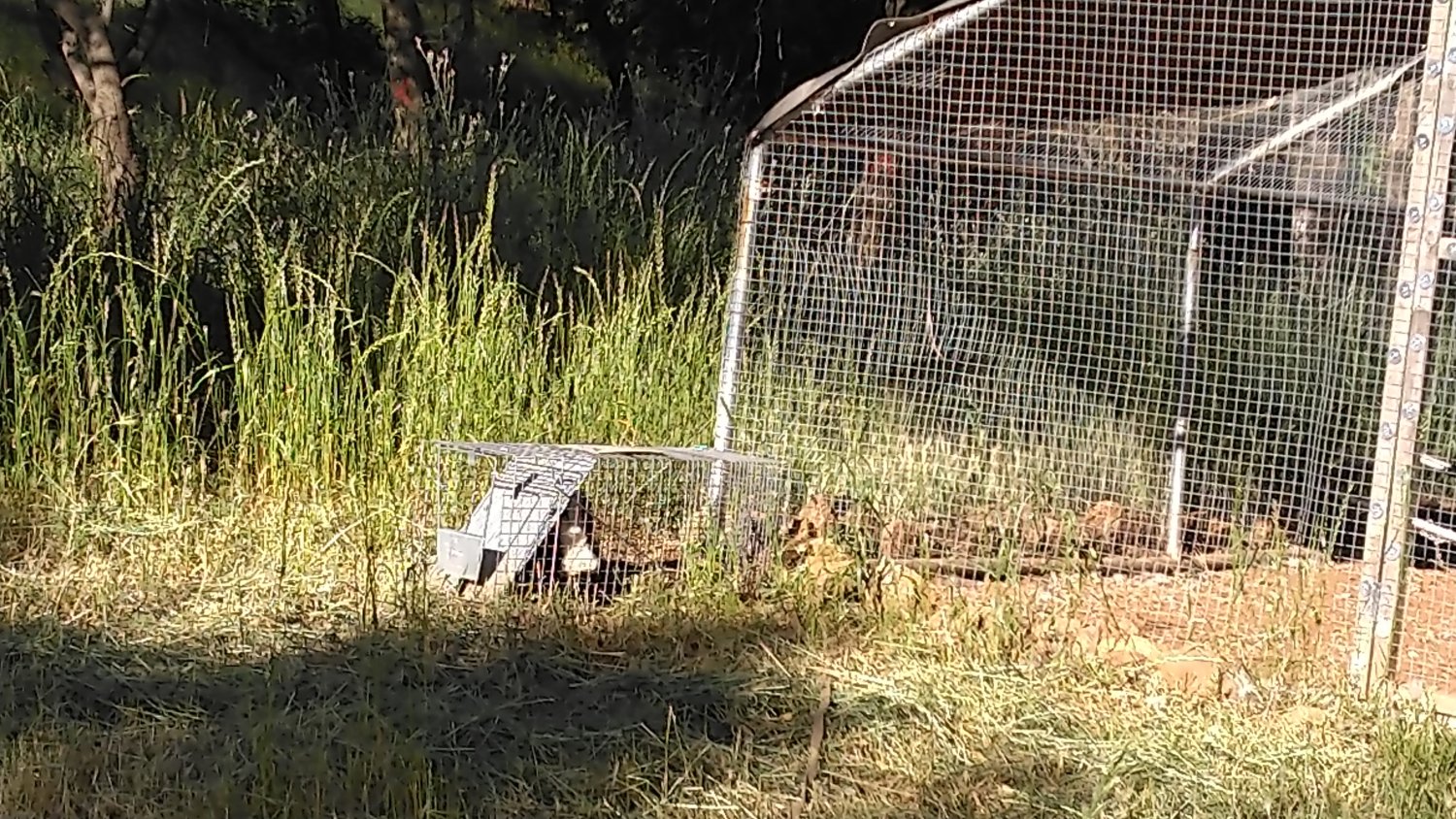 Father in law let hubby borrow his excavator, so he has been having a lot of fun digging up giant rocks and moving them around. He has been working on the rocks where I want my rabbit barn. We may need to move the barn a bit farther down the hill than I originally pictured as there's a humongous rock cropping that is not moving or breaking so far. Either that or hubby will need to break out the jackhammer.

It got hot at the beginning of this last week, up to low 90s, but hubby fixed up a swamp cooler and that kept the rabbits from getting too hot. They were definitely feeling it and breathing faster than normal, but no where as bad as last year. I need to find where the misters were stored and then they should be even cooler. I bought a new Rex buck, non pedigreed so he will be the meat buck. I still need to get a buck with a pedigree, probably going to try to find an opal, as that should pair nicely with the colors I have now. He is a bit skittish, but I have been trying to gently talk to and pet him every time I go by his cage and it's already made a difference. Going to try to tame my does a little as well but they are older so might not be as effective. The new buck's name is "Bubba Fig" and he is black. 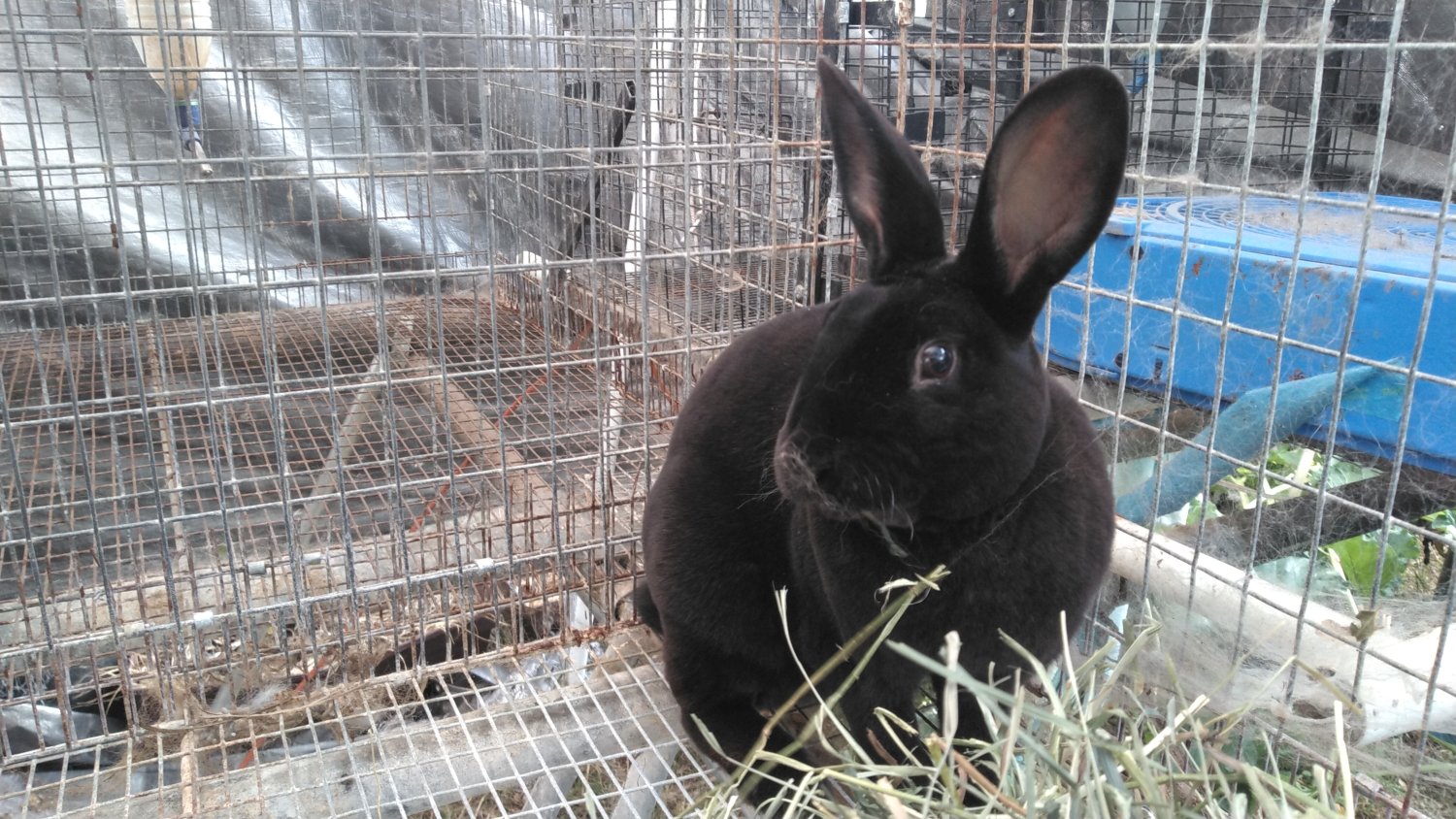 There's a wild rabbit that hangs around the front yard, very silly critter. I think it's a teenager? Otherwise I'm not sure how it has lived the long, being not afraid enough of humans. 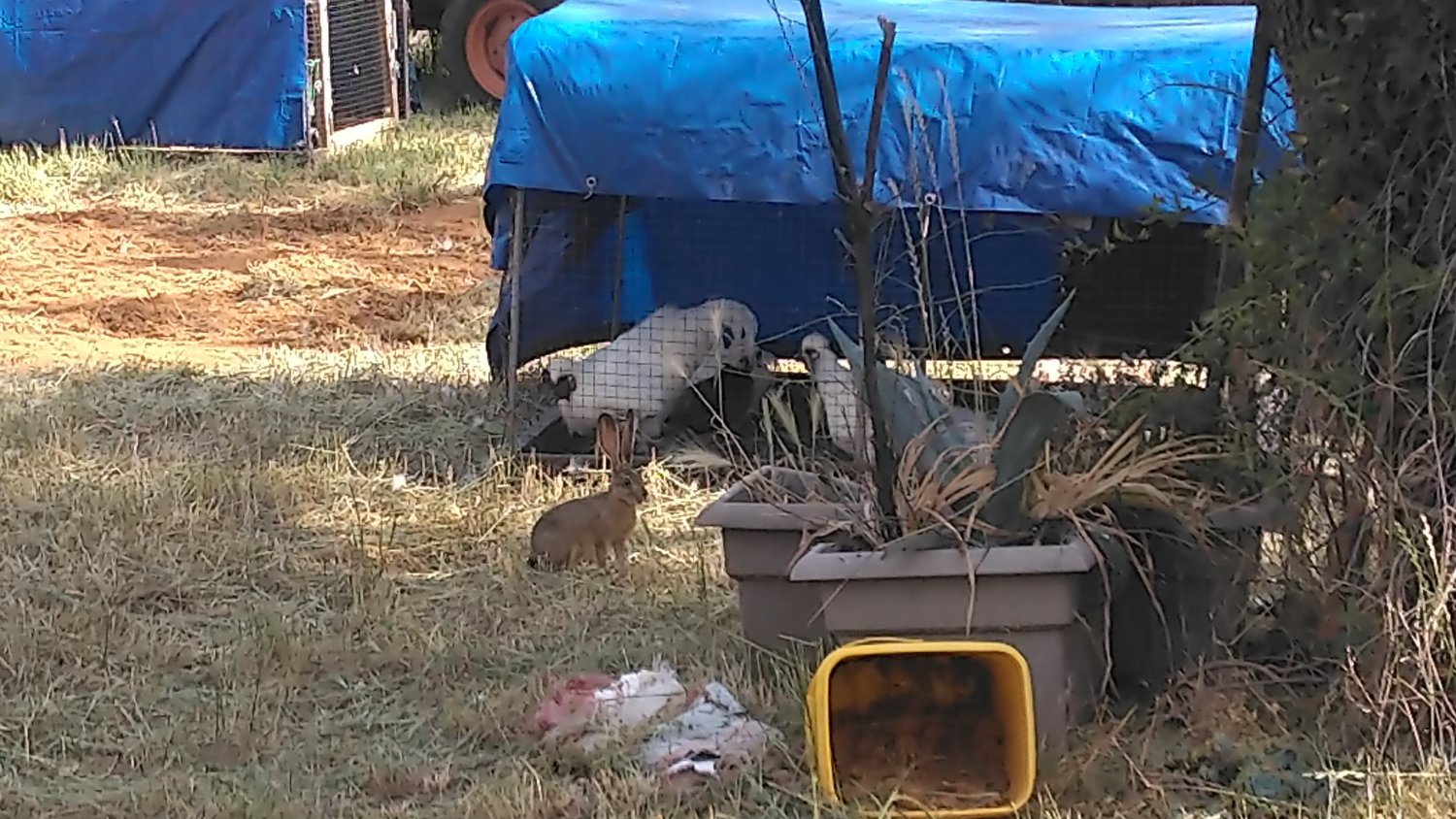 WOW, JUST WOW!!!!! We are nearly $2 gal less... most stations here are in the 4.39 to 4.50 for regular. Our on road diesel is 5.75 or thereabouts. I try to not let it get less than 1/2 so it doesn't "hurt" so much to fill. I am also doing as little "going places" as absolutely necessary and trying to do things before I go to work when I am already out.

Larsen Poultry Ranch said:
Still not wanting to crawl, he might go straight to walking.
Click to expand...

That would be DD1. Crawled once at 9 months, said "heck with it" and started walking. DD2 on the other hand crawled until she was well over a year old.


Larsen Poultry Ranch said:
I still don't really have a garden in, the raised beds haven't been built
Click to expand...

We are leading similar gardening lives!

Wow, BIG ears on those California rabbits. The Eastern cottontails have ears about 1/3 that size.

I caught it on video!

Did I share that we had a pest company out and they said we have in ground termites? We need to clean up all wood debris near and under the house. Plus remove any ground contact with the bottom of the house, and then have the pest company back out to spray. The previous owners were **** idiots.

We spent most of Saturday ripping out the rotted wood deck and then hubby played on the excavator and regraded the area where the deck had been. He also found what appears to be a white PVC water pipe that had been running under the deck past the house, but we have no clue why it's there, there's nothing it would have been going to. For once the hidden pipe didn't get busted as we discovered it. There is one water spigot on the far side of the house but that water pipe was laid almost directly under the edge of the house. Not smart to my way of thinking as if it busted open it would flood the crawlspace zone.

The remaining portion of deck looks mostly ok, but we need to crawl underneath and see if the joists are rotten. I think some are, but some are newer and would have been replaced when the previous owner replaced the deck boards in that section. Most of the wood did not appear to be pressure treated in any way. Several 4*4 uprights were completely rotted/chewed through and wiggled when you pushed on them. The gutter on the formerly decked portion of the house, drained down a chain THROUGH a hole cut in the decking. Gee I wonder why the wood on that side was completely rotted away?? 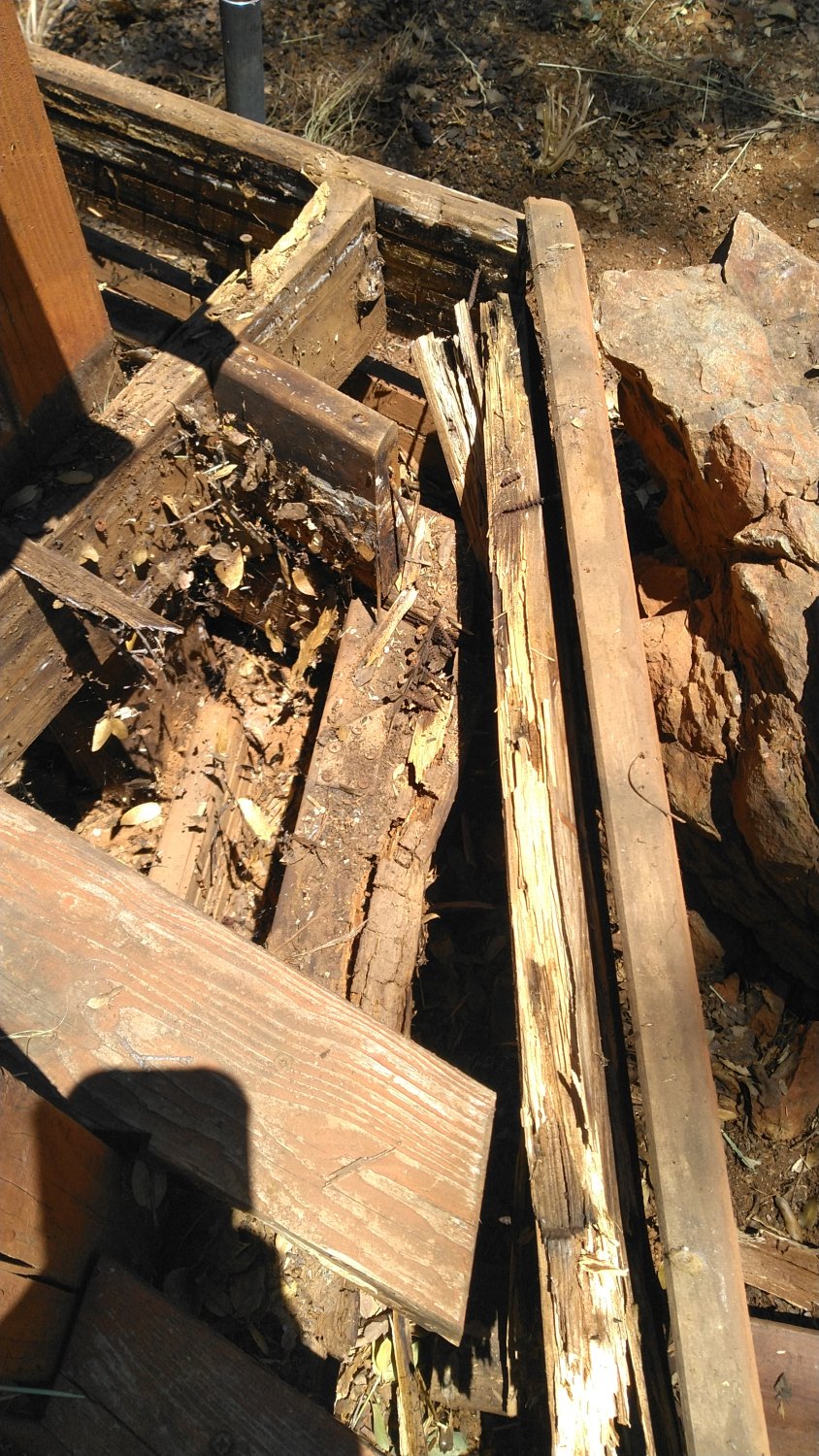 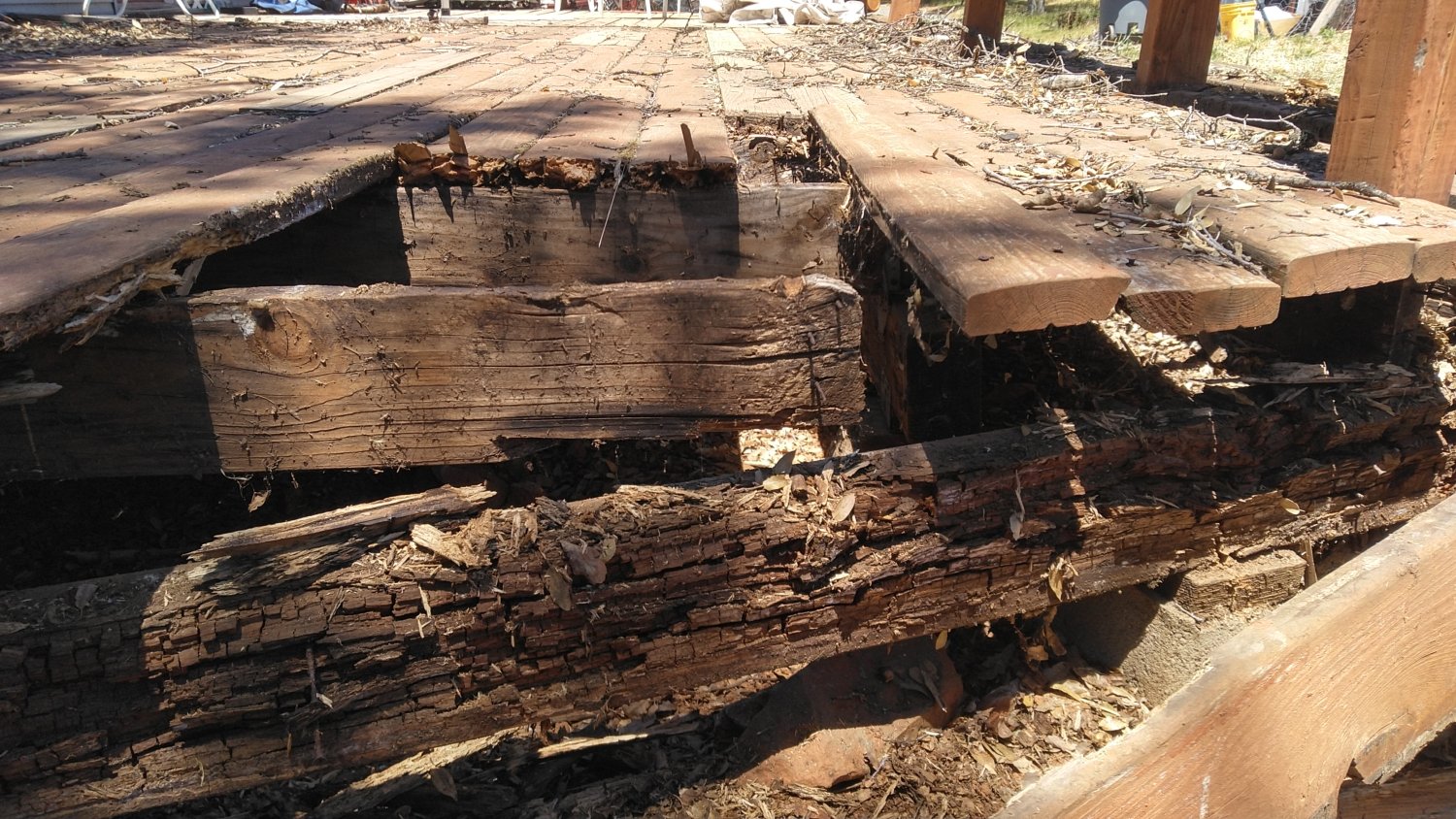 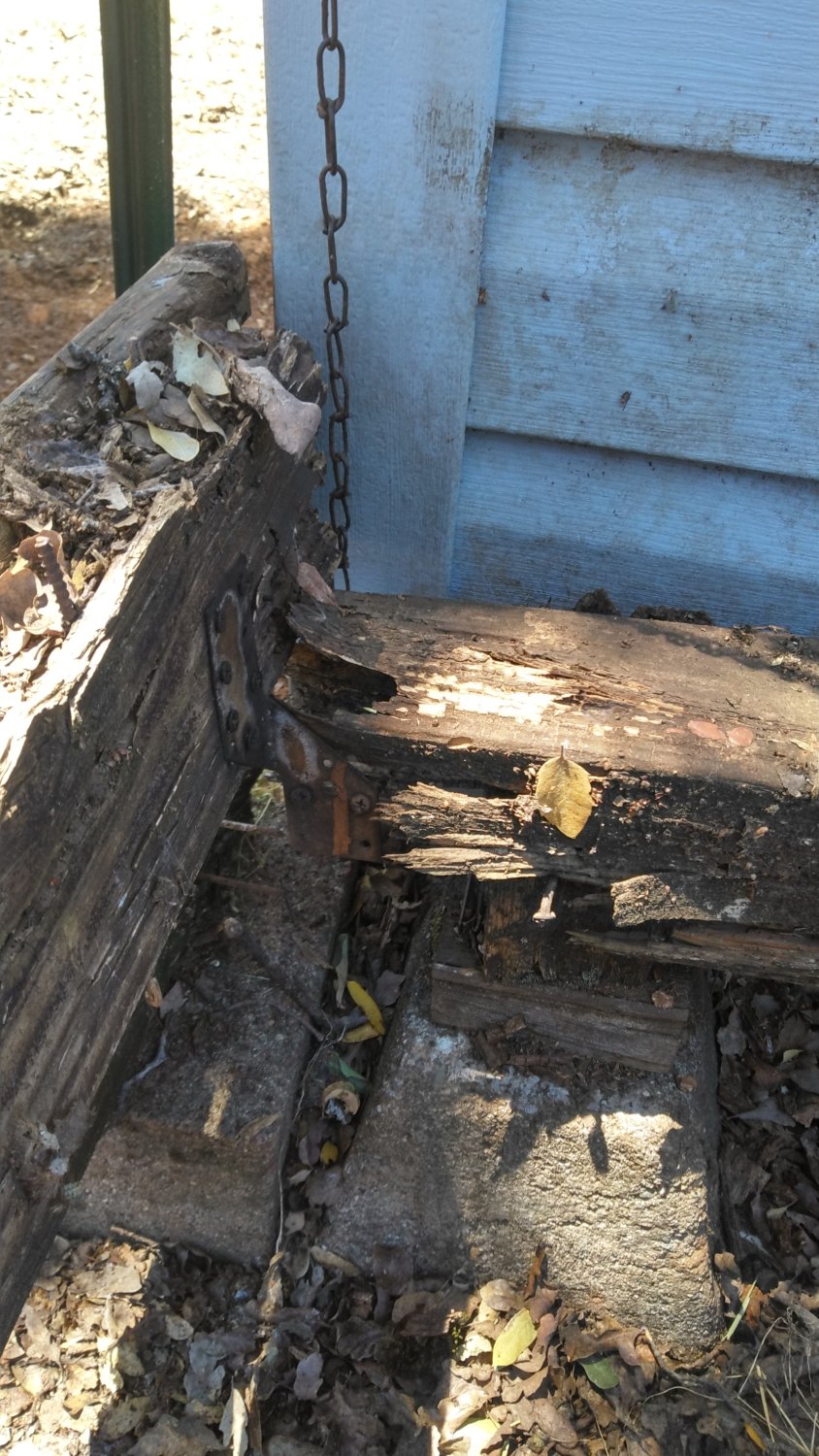 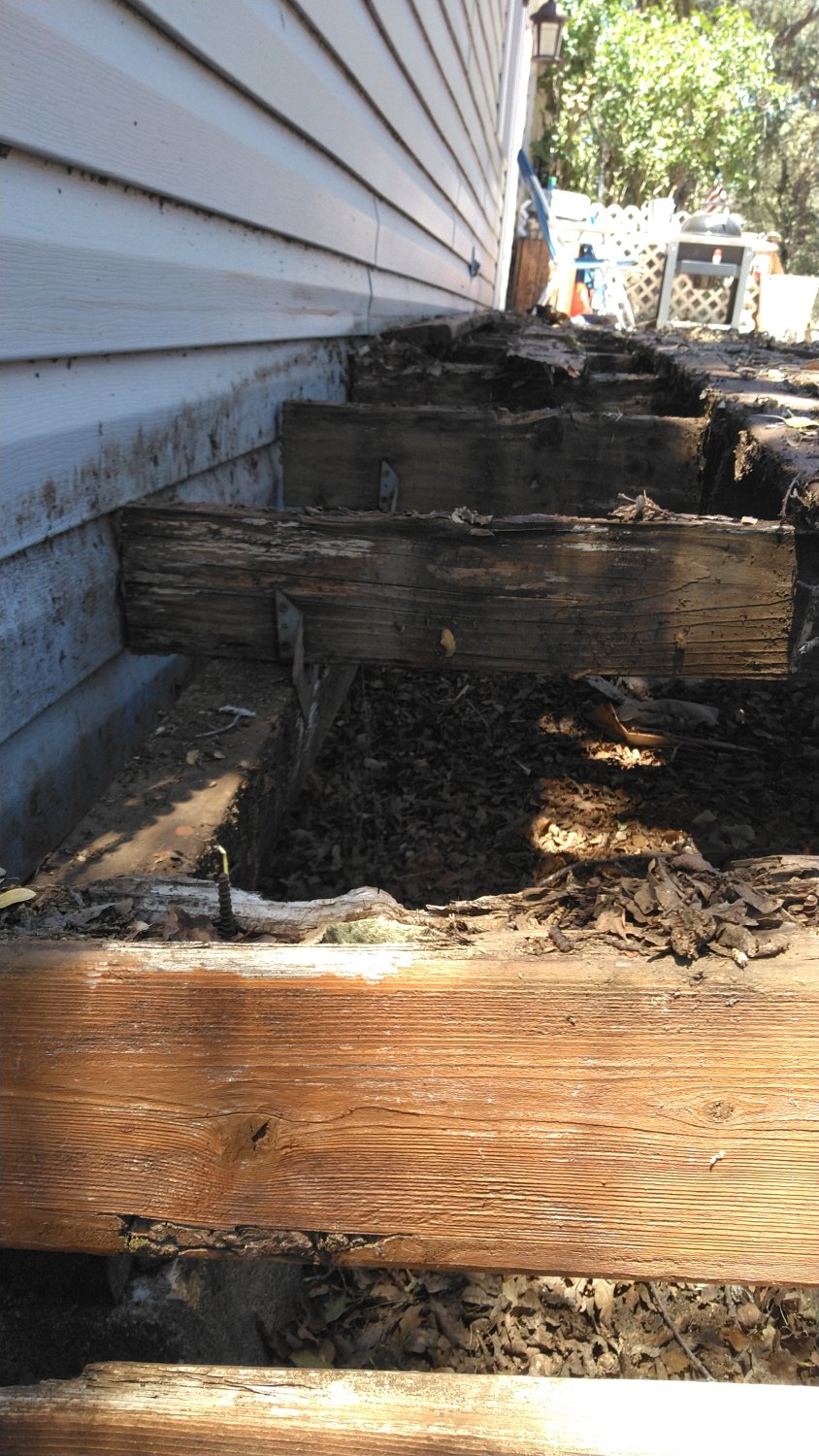 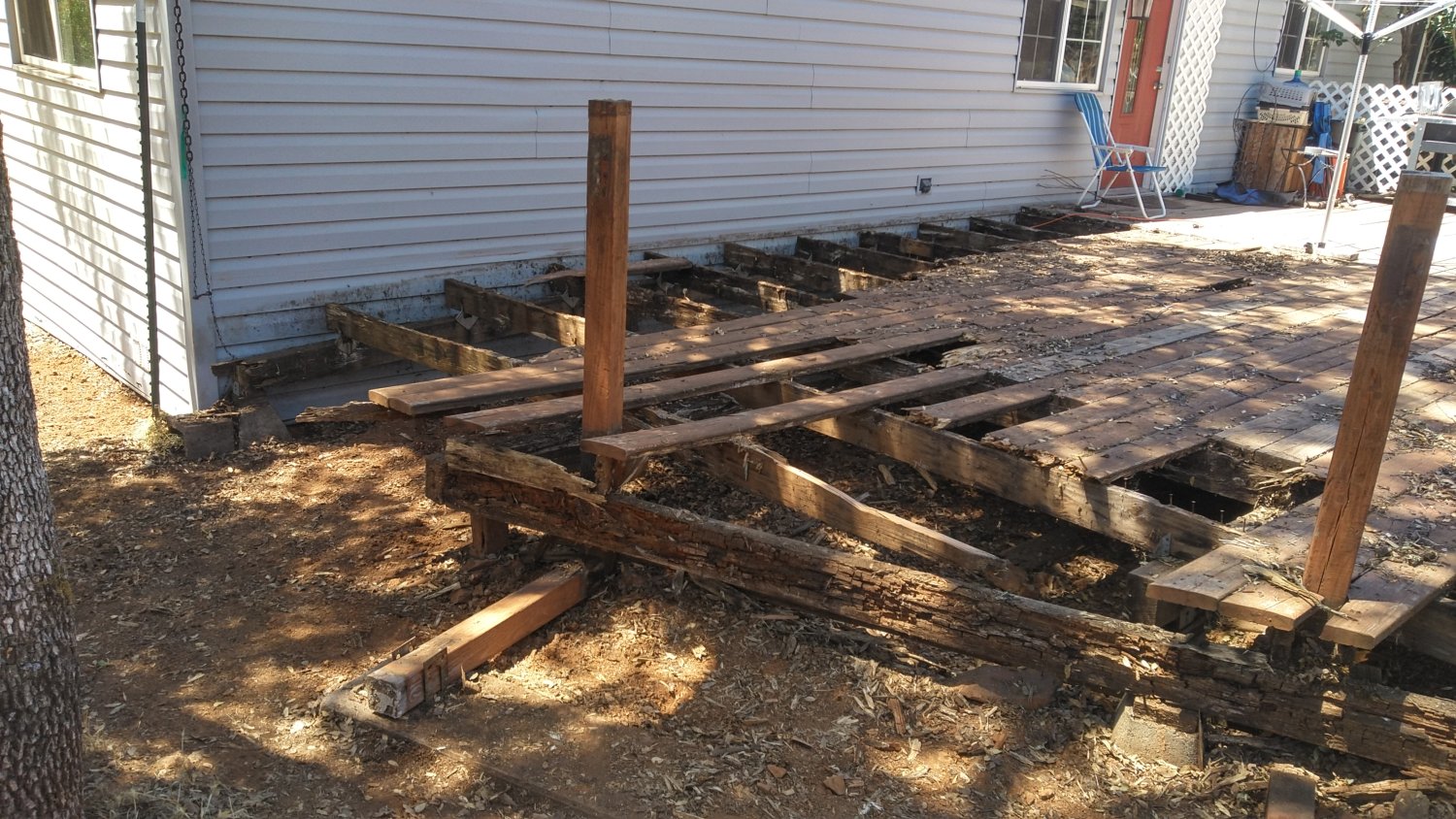 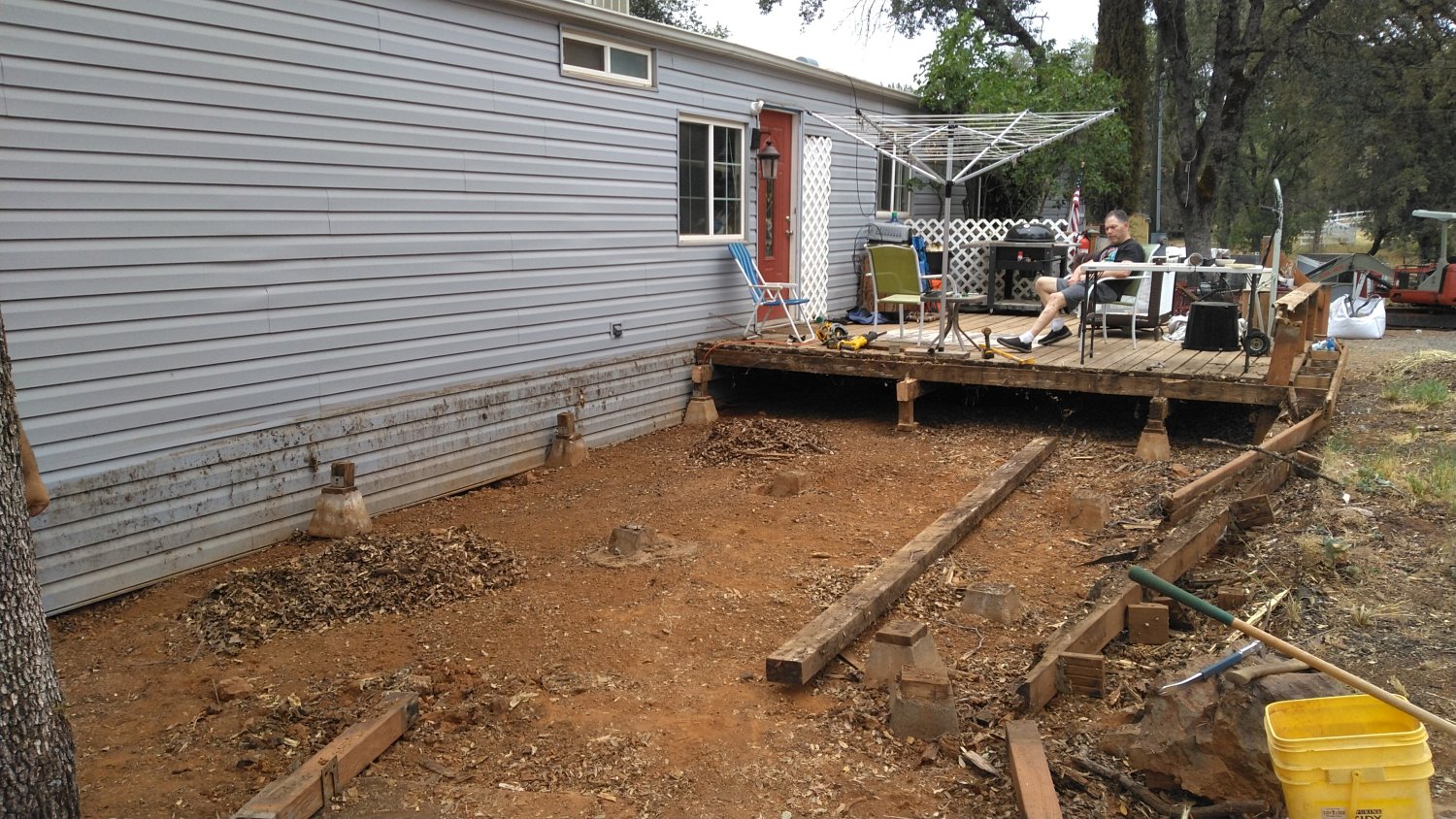 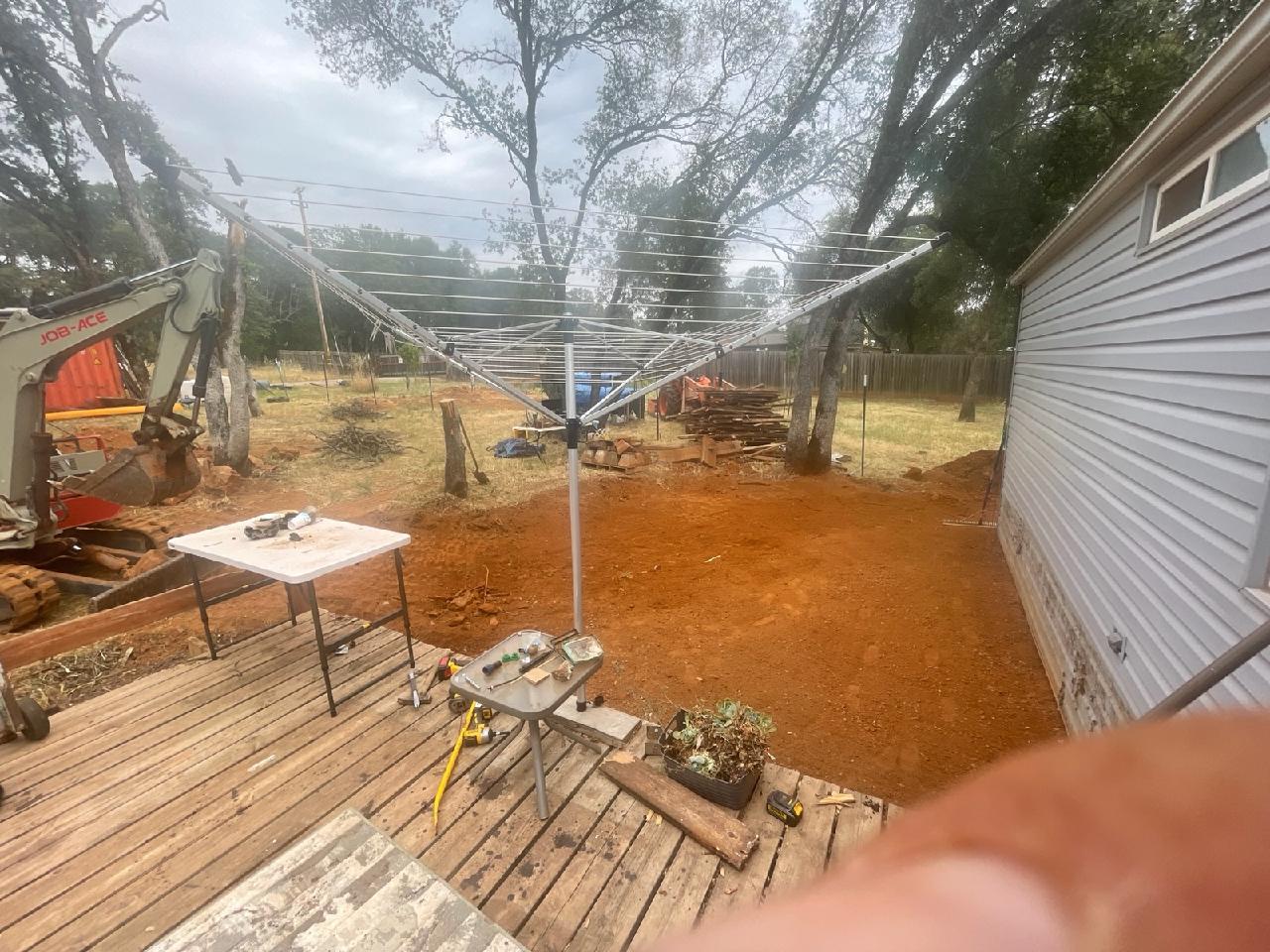 Just what you DON’T need! Termite restaurant right up against your house! Wow! What a mess!

Baymule said:
Just what you DON’T need! Termite restaurant right up against your house! Wow! What a mess!
Click to expand...

I just looked at the inspection report again, and the front deck actually didn't have active termites but definitely dry rot. The termites are currently coming up under the house near the back deck. I know there were termites under the house and front deck previously but were treated at some point before we bought the house.

I called today to get a appointment set up for the treatment, they are supposed to call back tomorrow. I'm hoping the termite guy will show us what it looks like when he goes to treat so we can be more aware of what signifies termite presence.
You must log in or register to reply here.
Share:
Reddit Pinterest Tumblr WhatsApp Email Share Link