Found someone in the local FB livestock group selling Hampshire piglets. They will be available in 4 weeks. We have to convince FIL but we might be getting some bacon seeds!!!

Do you have a pen ready for them? Congratulations on finding piglets, they go fast since Covid hit, everybody wants to be a farmer.

Baymule said:
Do you have a pen ready for them? Congratulations on finding piglets, they go fast since Covid hit, everybody wants to be a farmer.
Click to expand...

They won't be available for 4 weeks, and we are currently planning to have them at the in-law's since they have raised pigs before. I'm thinking we should call them Bacon, Porkchop, and Hamlet. Hubby and his sister raised pigs in FFA growing up, so he knows how to keep pigs. I haven't really been around them much but I'm looking forward to learning.

How far is it from your place to the in-laws?

Bruce said:
How far is it from your place to the in-laws?
Click to expand...

Only 15-20 minutes. Hubby works for him at the family business so goes by there almost daily anyway.

@Baymule I just finished re-reading your thread where you built the pig palace. I'm going to try to convince hubby to build one, I'd rather have the animals on our property than his parents. I think we can build a nice one and since our property is sloped a bit where I'm thinking it would go, I think it wouldn't get too crazy muddy.

The pig seller is asking $150 for castrated males, but offered a discount for multiple after I asked if there was any give in the price. I'm really proud of myself for asking as I usually avoid any potential confrontation. He's willing to go to $130/each for the 3, with half up front as a deposit and they would be picked up Mar 28. I believe they are supposed to be pure Hampshire.

Hubby says it's a decent price compared to what we've been seeing. It's not his first pick in breed but he says they have good hindquarters (roasts?). We are thinking we will try to sell one or more to pay for the rest and then we'd end up with free meat in the freezer. We might also try to butcher ourselves again, but I don't think it would be a good idea unless we can get a winch and arm like the traveling slaughter guy had. He let us watch the last pig hubby raised and it was like watching an artist. I'm pretty sure it went from breathing happy pig to two halves in the cooler in about 30 minutes. Then we had it taken to a butcher shop for cutting and packing. We might just do that again, or at least for the ones we sell. Hmm, I wonder if we can borrow FIL's crane... That could hoist a pig lol.

Ok, just looked at the ad again, I had the breed wrong. They are Yorkshire. Cute pics of the bacon seeds: 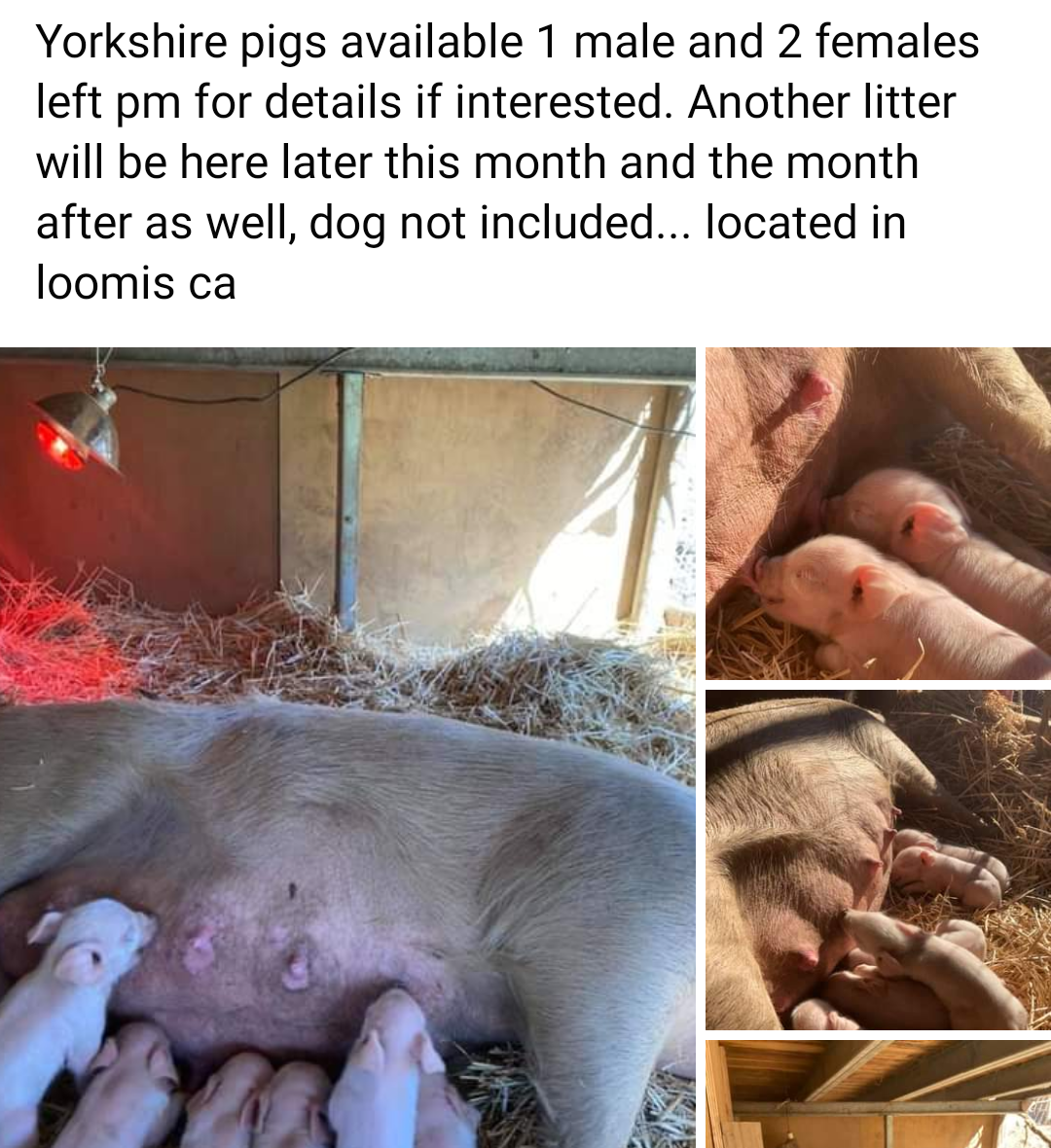 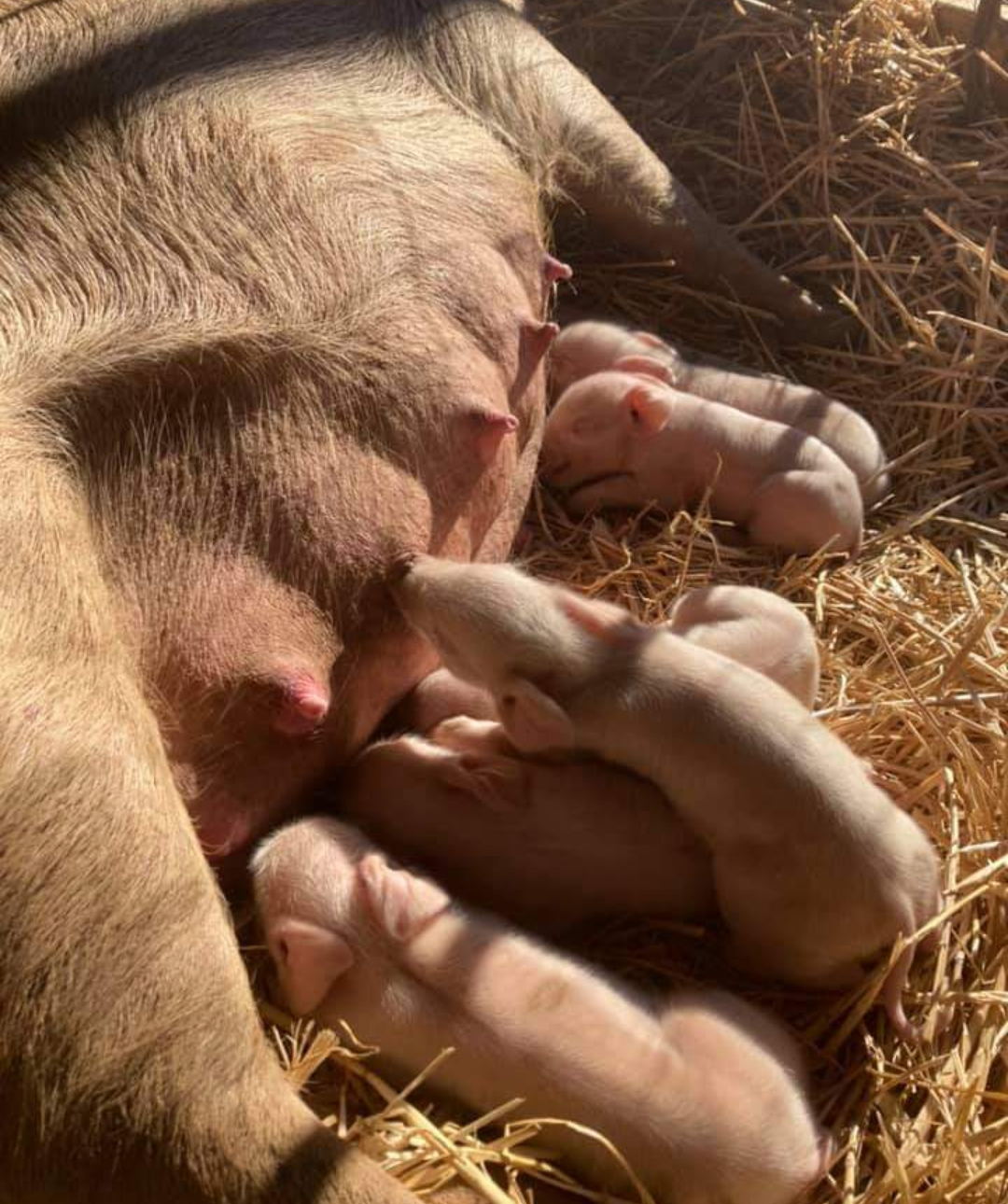 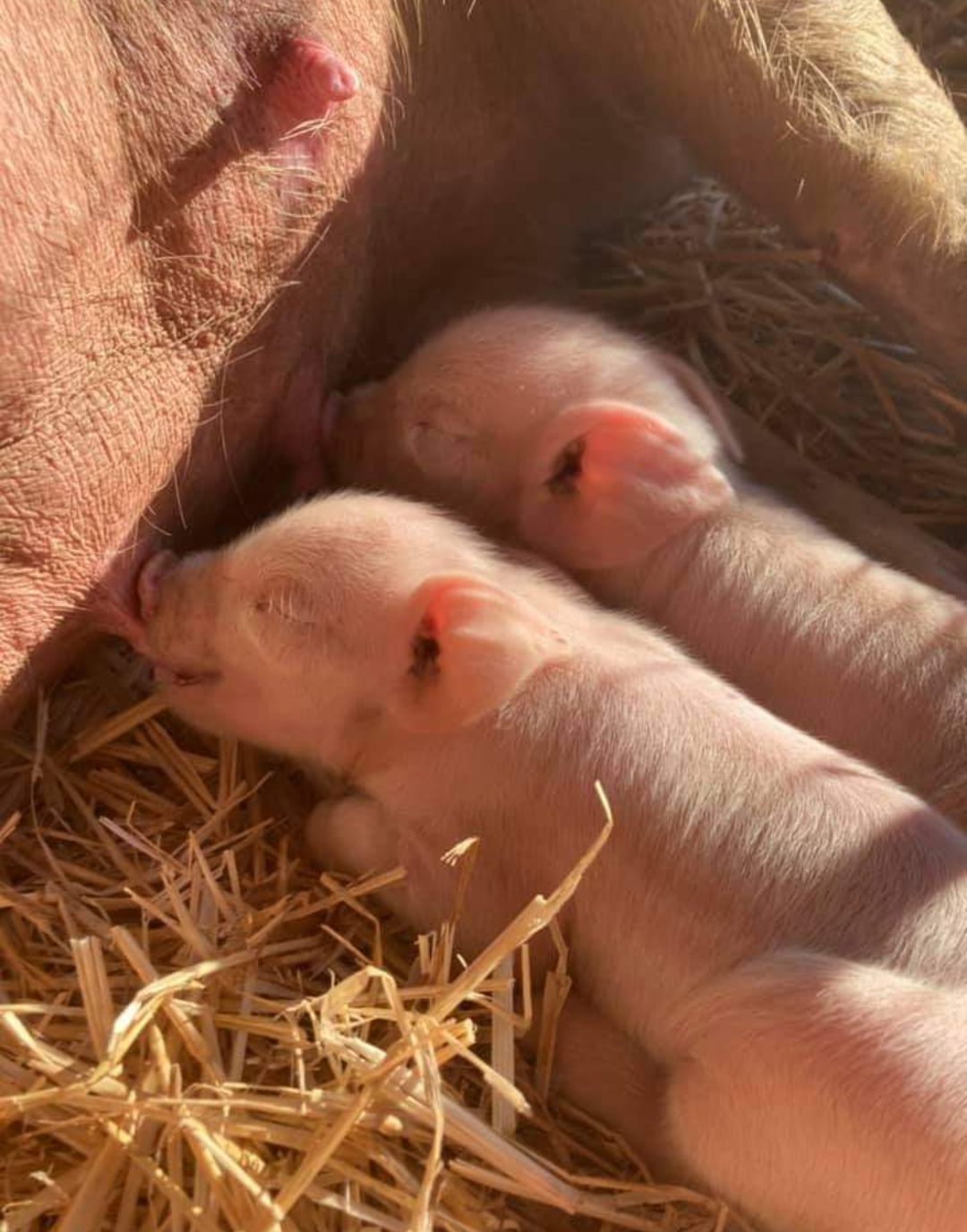 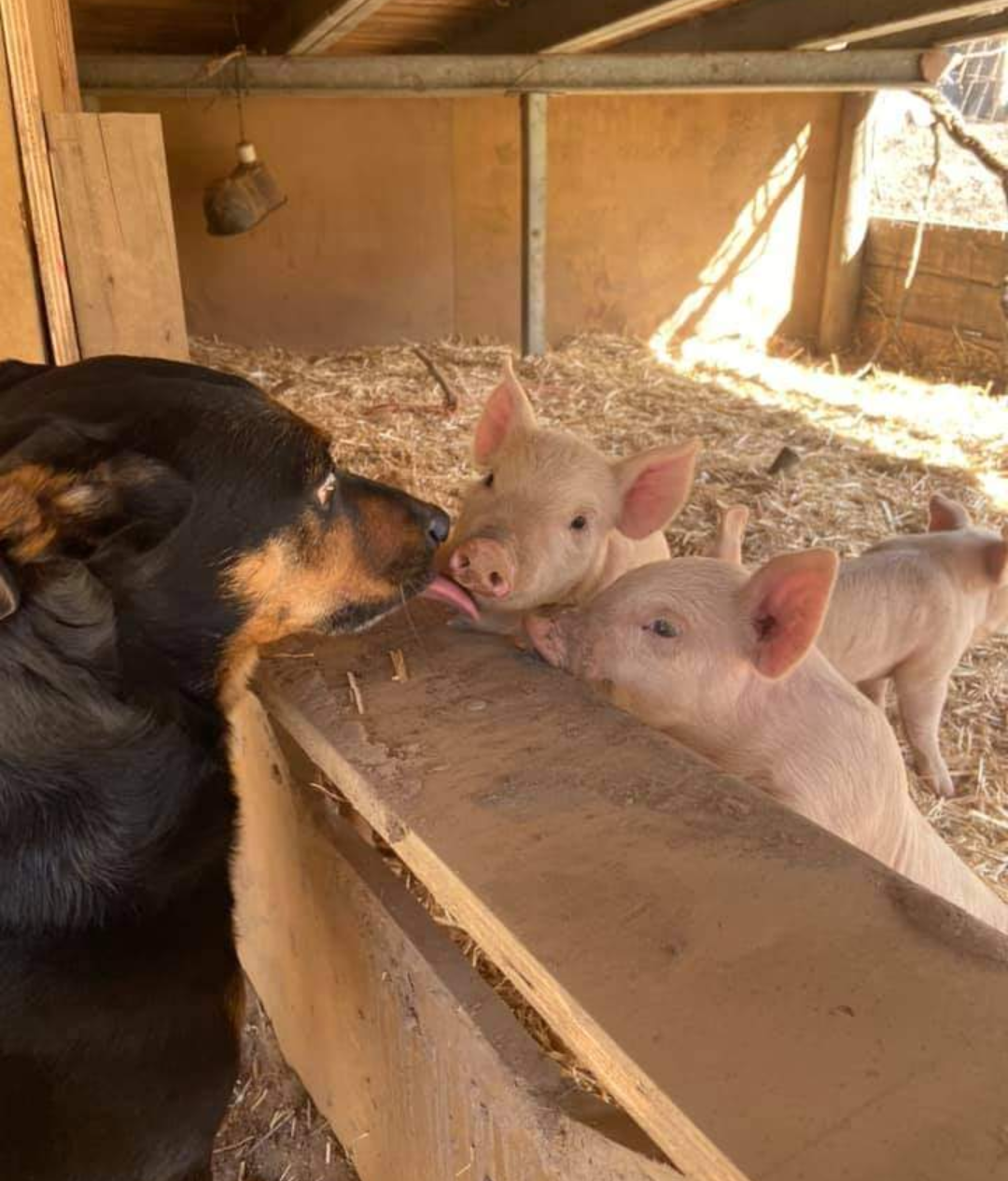 I hope my Pig Palace adventures help you on your pig adventures. Be sure and build the pen big enough so they can have a potty corner and be able to get away from their own waste. I love my Pig palace, it makes it SO easy to care for pigs. They can't turn their water over or lay in it. They can't turn a feed tub over and waste feed, feed bin is the way to go. Since I built the Pig Palace, I replaced the blue barrel in the corner of the shelter that was for soured corn. A neighbor built a trough from 2x10s for me and we have it anchored down. We bought a gi-normous boar and his head wouldn't fit in the barrel. He was advertised as 500 pounds, but turned out to be 820 pounds. That made a lot of sausage!

You got pinky pigs! Yorkshires are good pigs, they will make you a lot of meat! 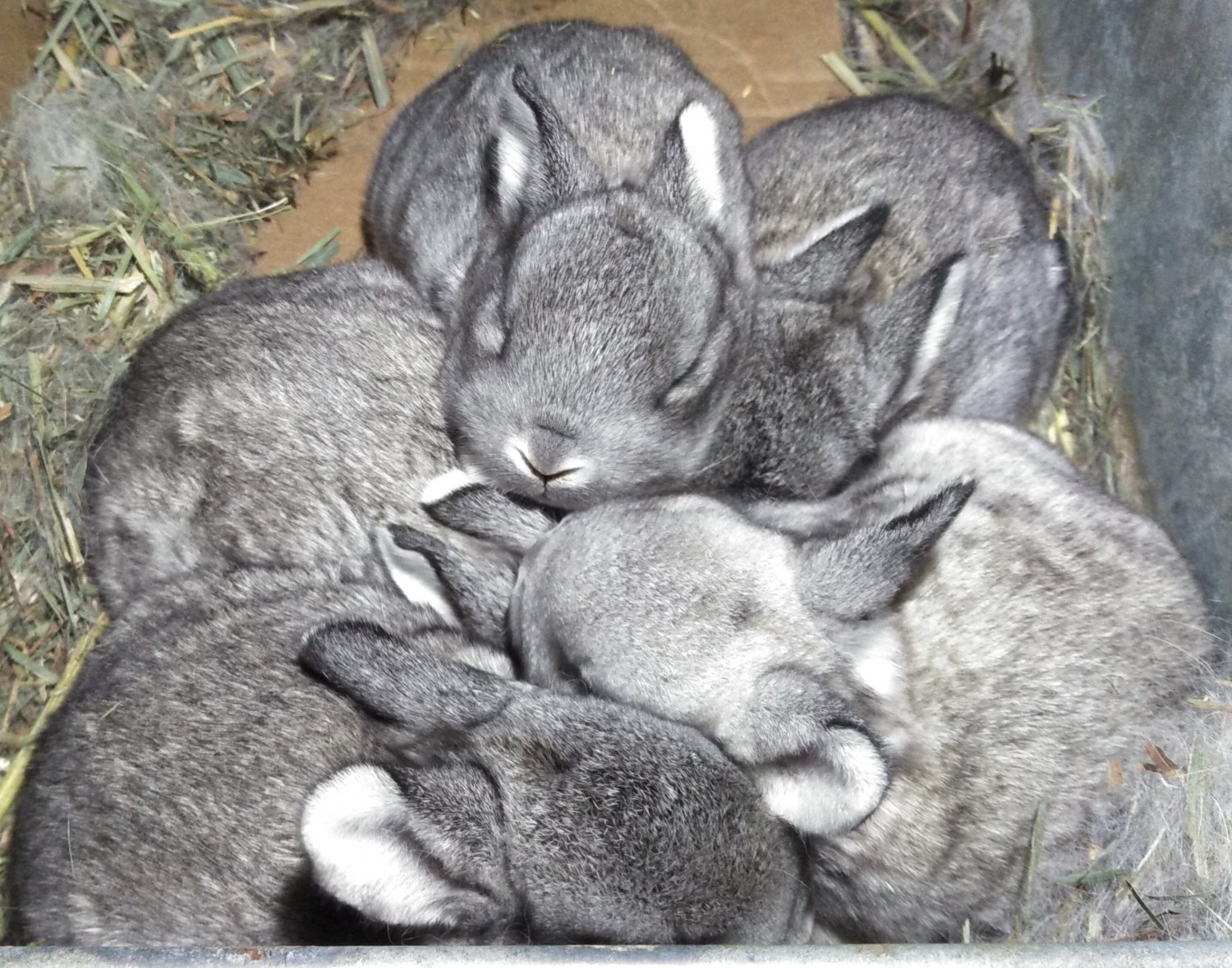