It's a science fiction movie, that they then made into a tv show, then two different spinoffs and another movie.

Larsen Poultry Ranch said:
It's a science fiction movie, that they then made into a tv show, then two different spinoffs and another movie.

Hubby made a bunch of progress in the den, got subfloor finished and then his dad and grandpa came over and helped install the drywall on all 3 walls. Hubby taped and mudded, and will sand and mud again on Sunday. I might be able to start the flooring Sunday but may wait until the sanding and mudding is done with. Amazing how much progress can happen in a few short hours with some motivation. 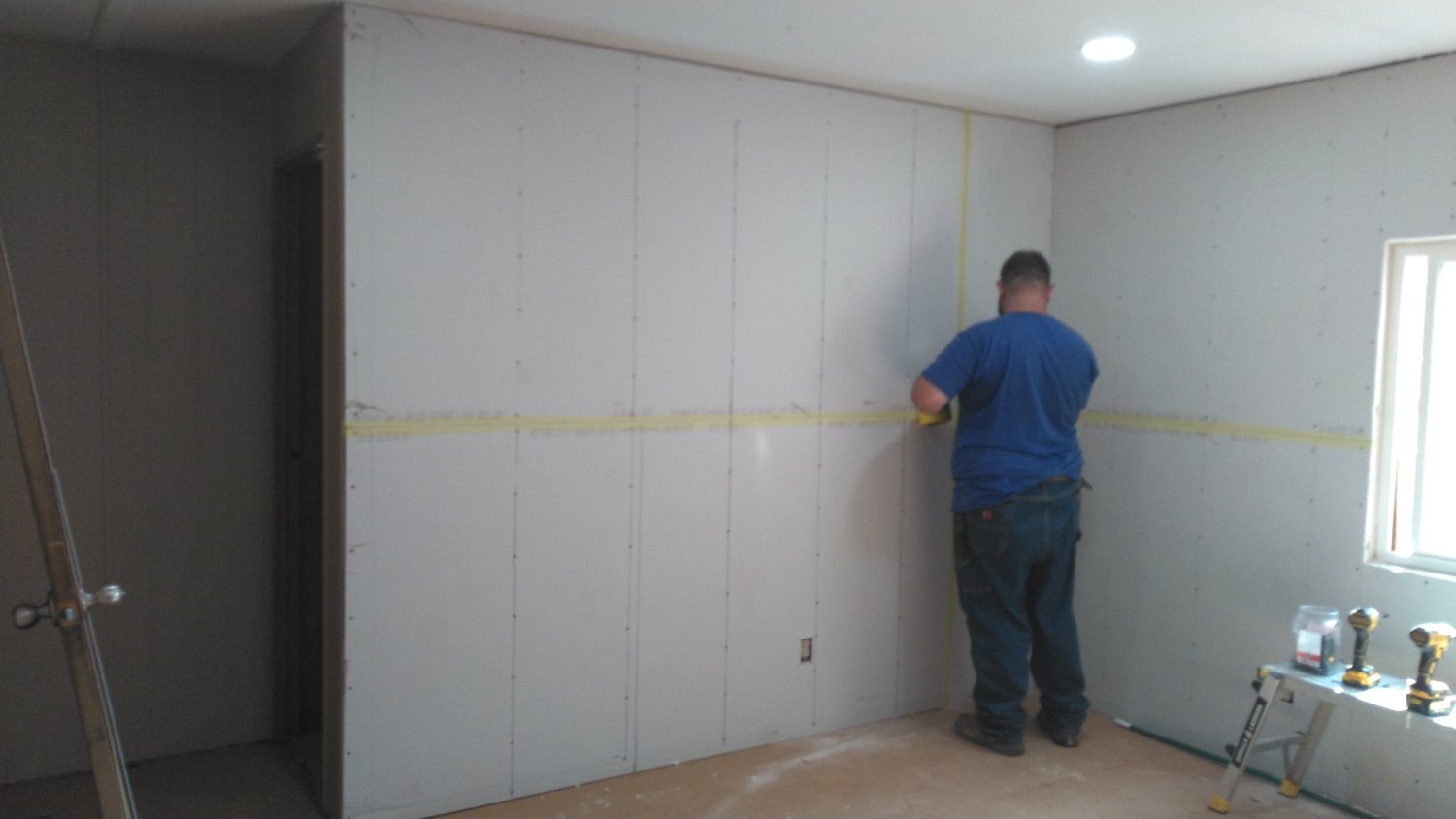 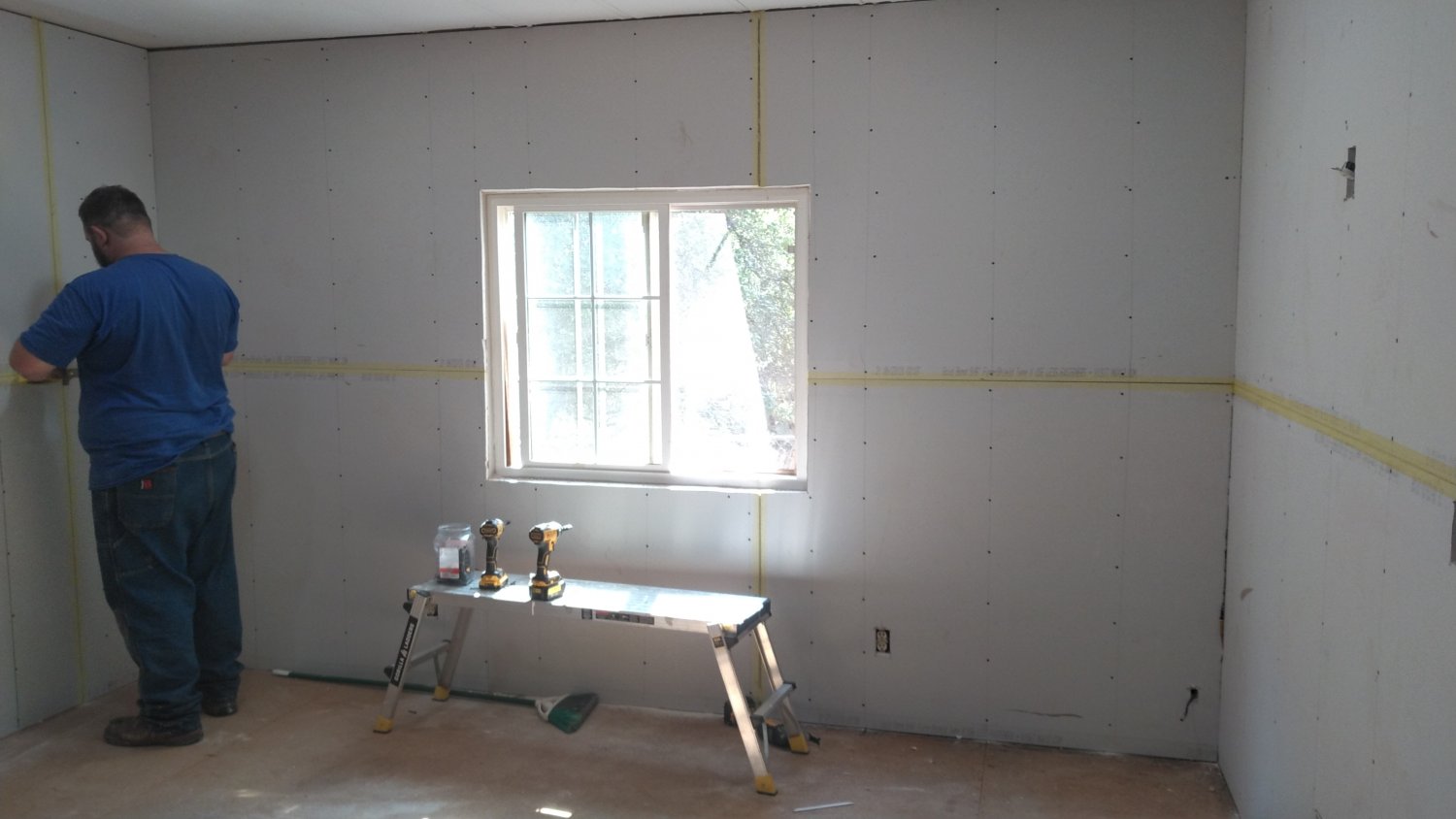 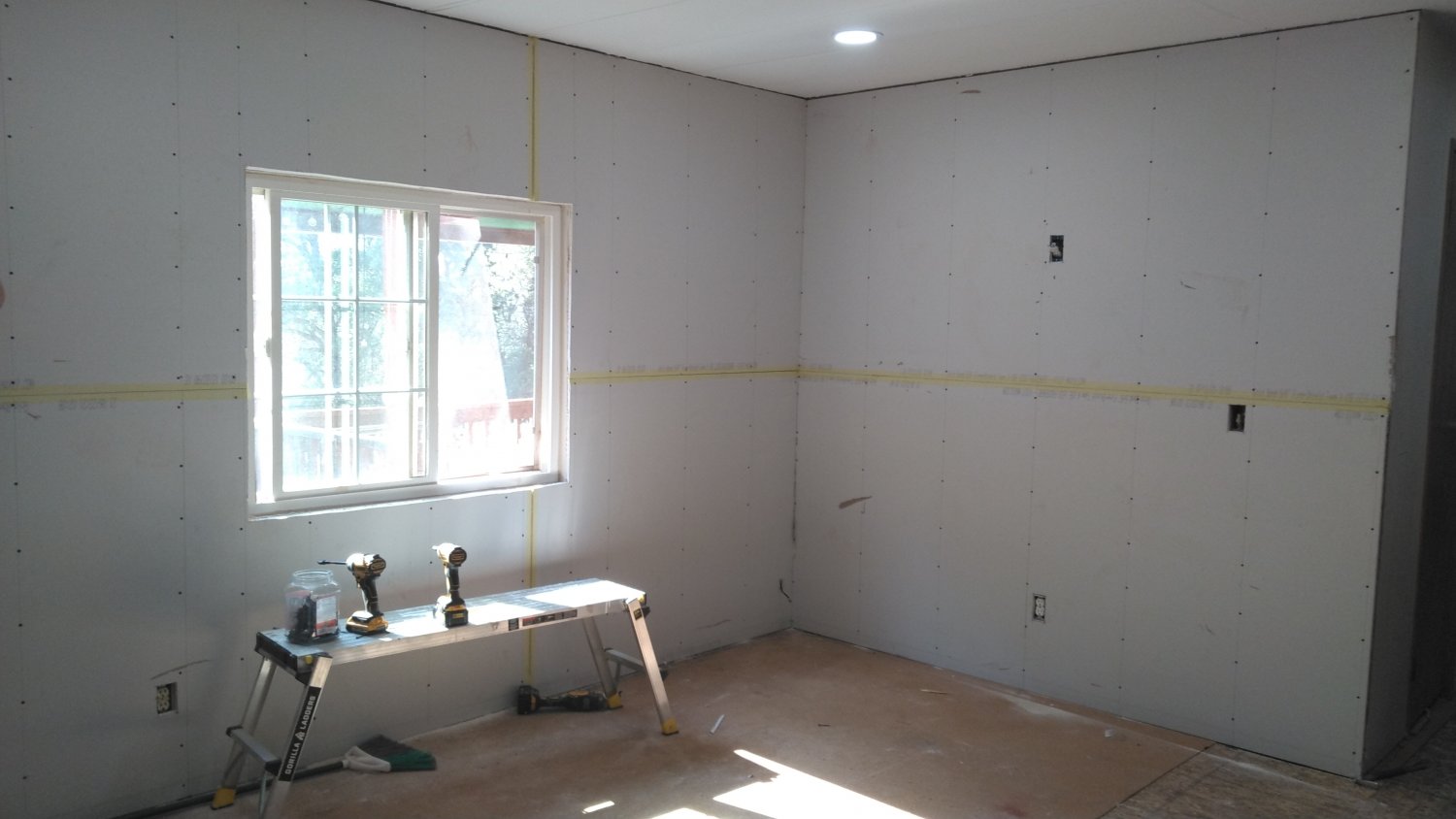 Better let them texture and paint before starting on the floors! The walls are making a huge leap forward! Yay for Dad and Grandpa helping!

Baymule said:
Better let them texture and paint before starting on the floors! The walls are making a huge leap forward! Yay for Dad and Grandpa helping!
Click to expand...

The wall behind the fireplace hasn't been textured or painted yet, I think we are going to try to do them all at the same time. We can put a drop cloth down and protect the flooring, it worked well in the living room. Hubby isn't allowed to paint unsupervised as he doesn't check for drips and holidays, and doesn't do edging.

I think I'm going to pack up everything in the built in china hutch and push for that to be taken down so we can get the wall in the dining room at the same time.

I'd wait on the floor until the walls are done. Otherwise you'll be fighting the sanding dust. If you wait until they are painted the painters don't have to be careful

Hubby is finished mudding, needs a little more sanding and possibly some touchups, he doesn't like how some of the corners came out.

It's crazy how much brighter that room looks without the dark wood paneling on the far wall. Probably helps that the curtains are down but still. 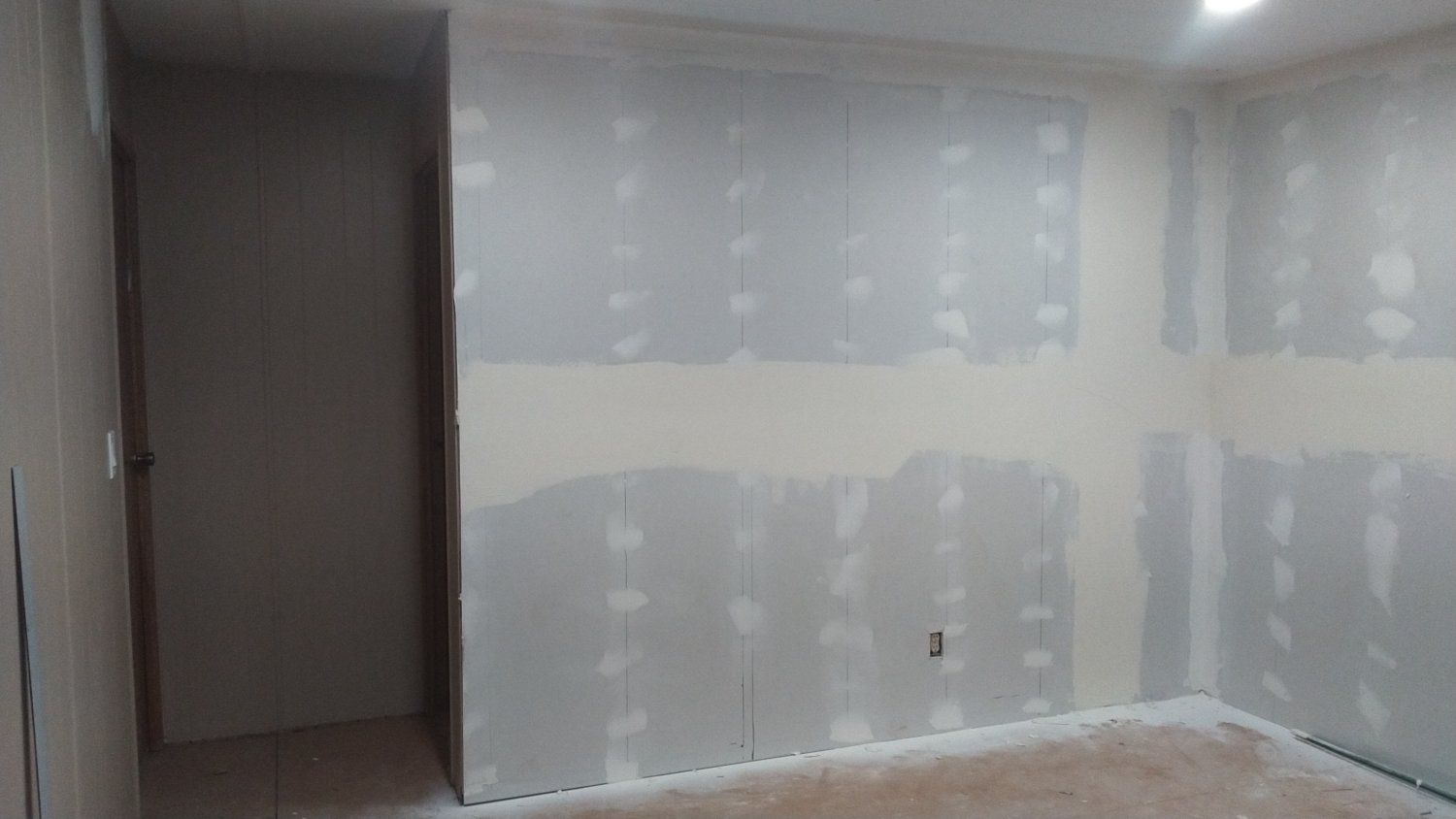 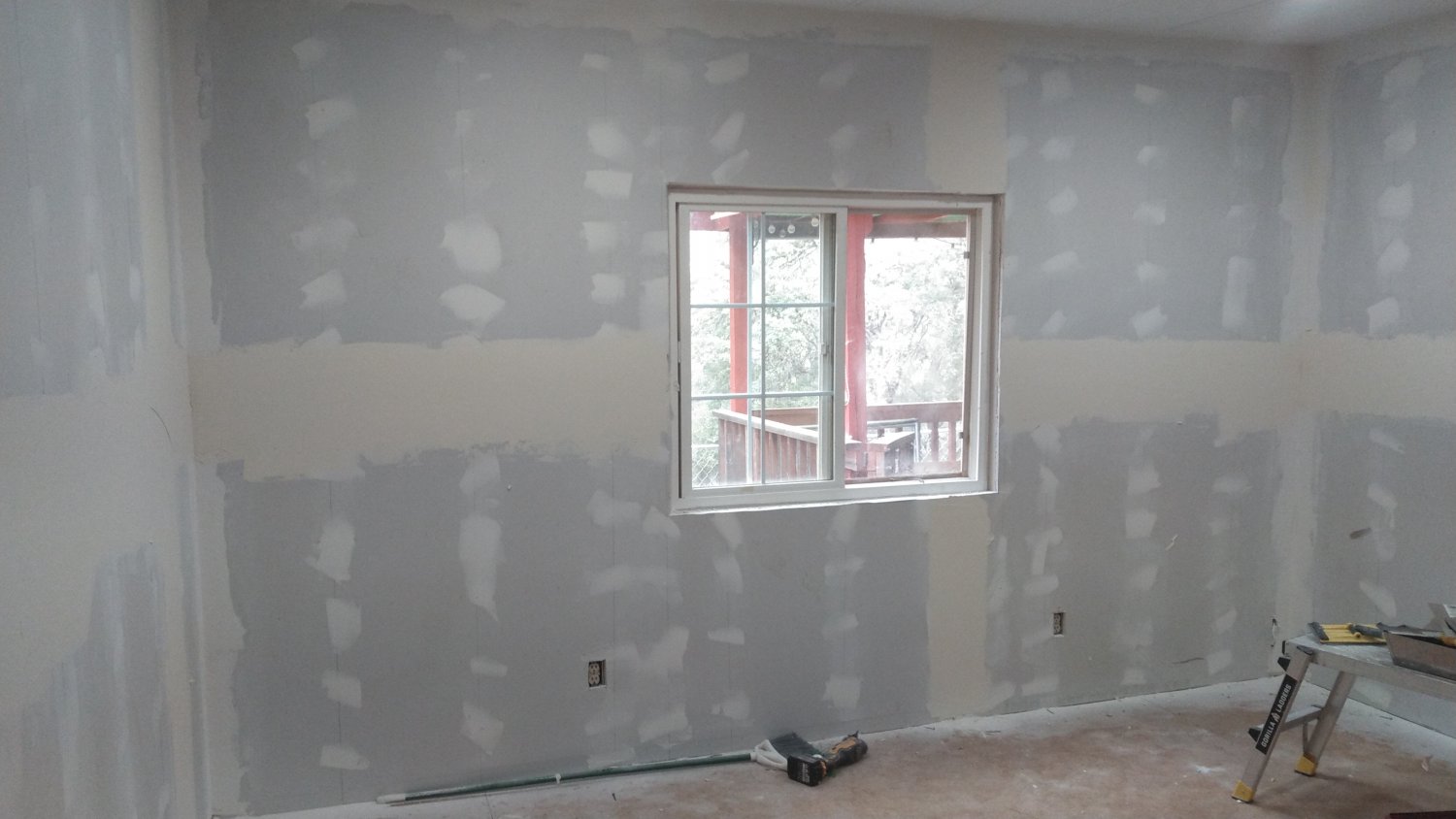 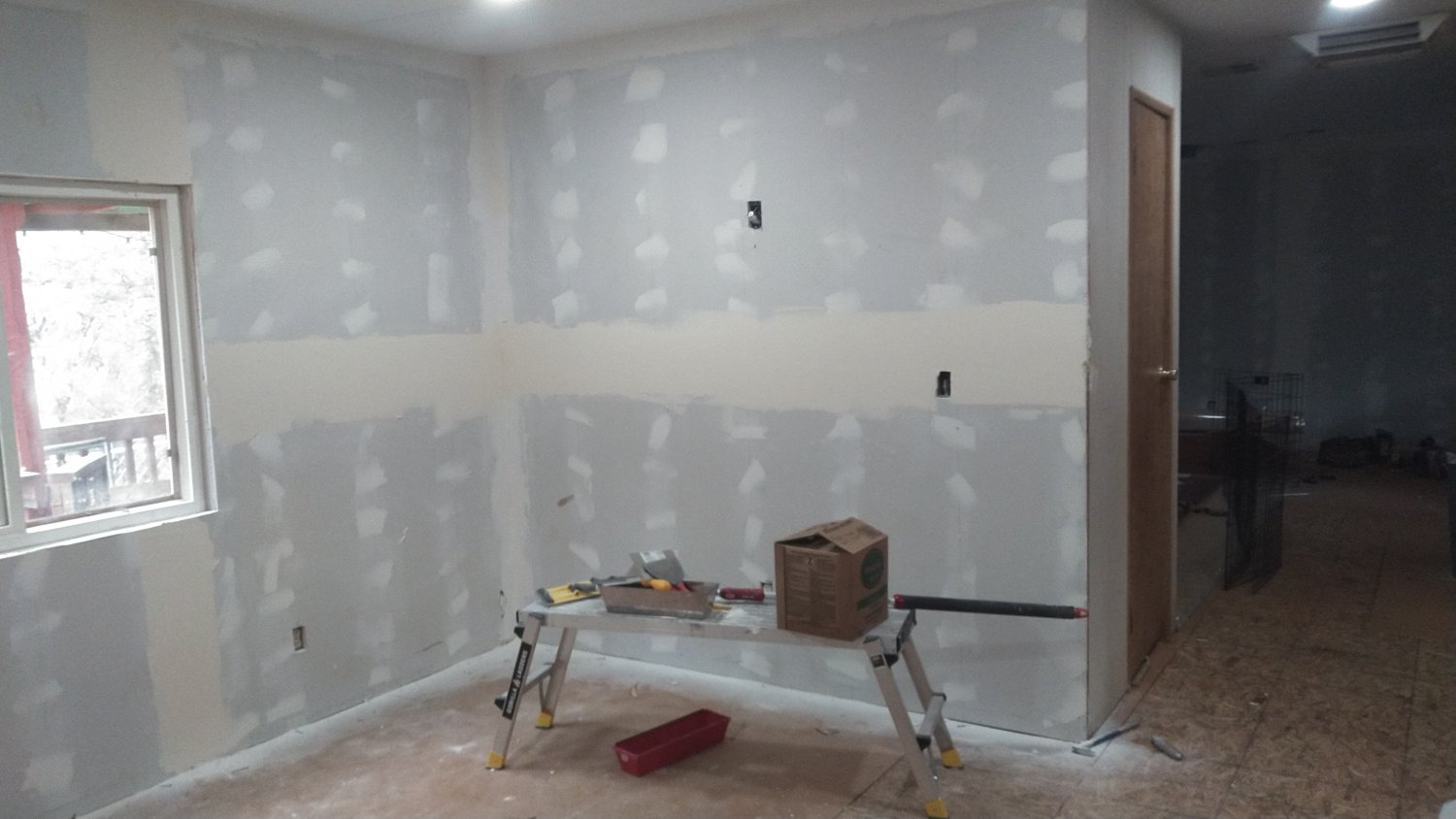 Corners are hard. So are butt joints if you don't have tapered edges.

Yesterday it sprinkled!! I think for a good portion of the morning and stayed cloudy for quite some time. I don't have a rain gauge so I don't know how much it was but not a lot.

Came home from work yesterday and hubby had textured the den. Didn't texture the fireplace wall, grr. I started taking the stuff out of the china cabinet and took out all the doors and drawers I could reach. The stupid fireplace is in the way so I couldn't get the stuff in the middle. I really want to do that wall when we do the others but hubby is dragging his heels. I told him he's not allowed to paint the den without me as he doesn't look for or prevent drips. Might prime it tonight even though the fireplace wall isn't ready.

Also got our water bill yesterday, plus a letter stating our usage had increased drastically from the prior month. No duh. The pipe came apart at least twice and wasted a ton of water. The bills for the prior two months were about $75 each. The current bill is just over $400. I've watered the garden the same for the past few months, so can't blame it on that. We did get the drip system set up for the orchard, but I don't remember which month that started. On for 30-60 minutes (can't remember which, hubby set it up) 2x per day, with 5 gal/hr dripper per tree.

Really want to get irrigation water for the property. Have been researching that, and hubby has been talking to a lot of the neighbors. Apparently the group of parcels above our group of 4, has irrigation water pipes in from a box a mile away? Sounds like they are buying it without the utility's knowledge and apparently there is some water theft going on. If we could get the whole lane on a pipe, with official accounts, people should actually receive the water they are paying for. Kind of afraid to rock the boat tho, don't want to get the neighbors in trouble, I just want water.
You must log in or register to reply here.
Share:
Reddit Pinterest Tumblr WhatsApp Email Share Link