Litter of 5, only one left

Hi all, my doe Paprika just had her first litter Sunday evening. There were 5 babies. I checked on them Monday morning (which is when I counted them), by taking the whole nest box out of the cage and putting them in a bowl lined with a towel. They were active and squeaking a little so I only had them out for a few minutes just to make sure I counted them all, then put them back in the nest and nest back in the cage.

When I got home after work around 6 I checked the nest again and only one baby was still alive. The ones that had passed all had their mouths open and blood was showing in most of the toenails. Their tummies looked normal/big so I assumed that she had been feeding them all. Temperatures got to around 90, could they have overheated? All of them were covered in fur at the back of the nest box. The baby was still alive when I checked this morning before work.

One of my other does Cinnamon had her kits Saturday overnight (6 kits) and hers seem fine. They did spread out in the nest box, I'm assuming because of the heat. I've been afraid to pull Cinnamon's nest box to look in case it was my handling Paprika's kits that somehow caused them to die.

Should I leave the one kit with Paprika? Or move it to Cinnamon so she has 7?

Put the last kit in with your other doe, Cinnamon. A lone kit barely ever survives.
It could definitely be the heat that killed them. When it's over 80 degrees you should take all the fur out of the box or the kits could overheat.
If you see the kits gasping for air, it means they're too hot.
In my experience, dead kits always look like they have bloody toenails. I think it's just how they look for some reason.

Or it could be a first-litter issue. Most first-time does have terrible luck with their kits even if they did everything right...sometimes all the kits will just die for no apparent reason.
Just rebreed Paprika tomorrow and the next litter should be better

Thanks for the reply

Paprika's kit and all 6 of Cinnamon's kits seem to be doing ok, they were all wiggly when I checked the nest boxes after work. If I move the kit to Cinnamon's nest, should I rebreed Paprika now or wait until after summer? Is there something I should do to help Cinnamon accept the kit? Use vanilla or something strong smelling? Or will she accept it if the kit is just in the nest with her babies?

I have another doe (Pepper) that just weaned her kits last week and I was hesitating to breed her again because I didn't want her to be uncomfortable having babies in July. I was thinking of waiting until September when it should start being cooler.

It got to almost 90 again, I think it's going to be hot all week. The cages are all in a row outside but I thought they got enough shade from the house to prevent them from getting too hot. I stood outside the different ends of the row and I think I need to add some sort of sun block or shade on Paprika's side. I'll bet that is why the kits died, she added a ton of fur to the nest and most of the shade disappeared in the late afternoon.

I forgot to say in my original post: Paprika is a Flemish/NZR mix, Cinnamon is pedigreed Rex (castor), Pepper is a chinchilla/Flemish mix, and my buck Frost is a pedigreed Rex (REW).

This morning I took both nest boxes out and was going to move Paprika's kit to Cinnamon's nest but I was concerned I wouldn't be able to tell them apart so I took some pictures, and Paprika's kit is huge compared to the others (top of second photo). 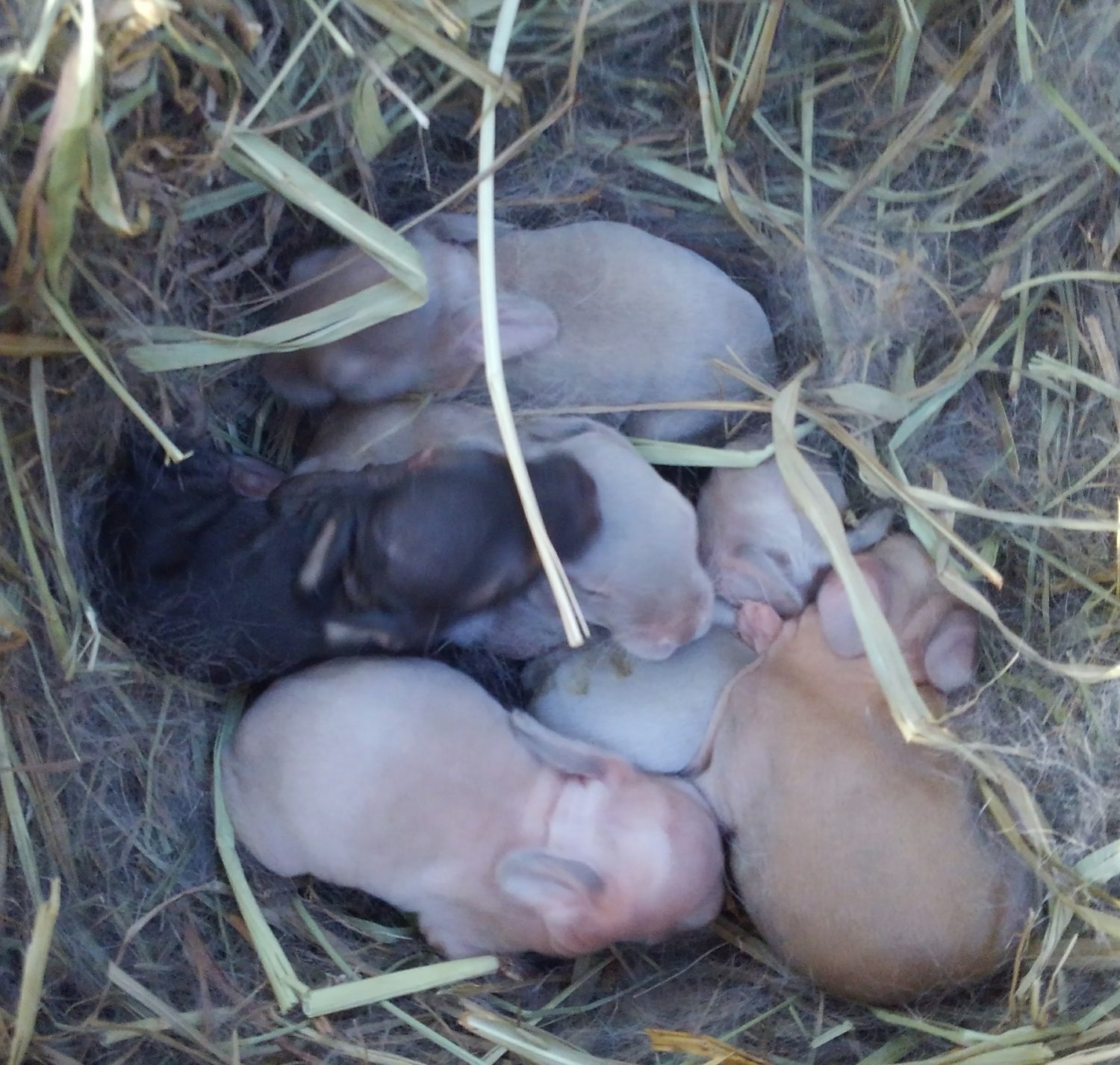 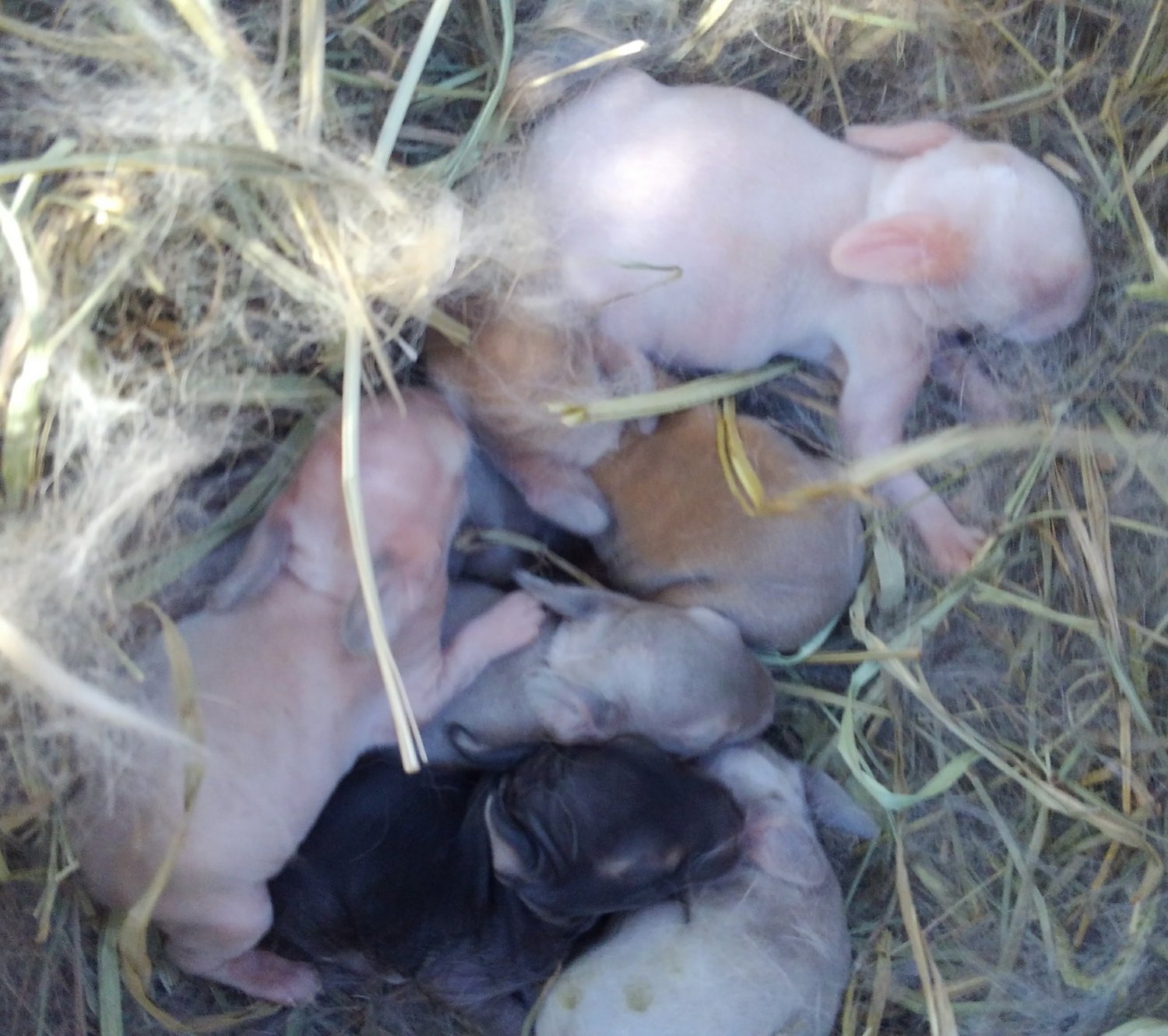 Two of Cinnamon's kits were thin, one was worse than the other and very wrinkly, backbone seemed pronounced. I put those two kits in Paprika's box and put the boxes back in the respective cages. I was going to try and hold the babies up to Paprika but when she sniffed the one baby in my hand she jumped into the box. I put the baby back in the box under her and did some chores. When I came back and checked on them, Paprika was out of the box and both kits had huge tummies.

I think I may give Paprika one more baby depending on how she does with these two today and not rebreed any rabbits until it cools down again. I added a tarp to shade the cage, hopefully that will keep them cool enough until I can get another fan set up.

Well i'm glad everyone is happy and fed now!
As for the vanilla theory...I've never done that and so far I haven't ever had a doe reject an orphan

AmberLops said:
Well i'm glad everyone is happy and fed now!
As for the vanilla theory...I've never done that and so far I haven't ever had a doe reject an orphan
Click to expand...

I didn't end up using anything, and she nursed them just fine. I haven't been home to check yet but I'm hoping all is well. I will keep adding updates as the litters progress.

Larsen Poultry Ranch said:
I didn't end up using anything, and she nursed them just fine. I haven't been home to check yet but I'm hoping all is well. I will keep adding updates as the litters progress.
Click to expand...

Oh good! I know when you google it, everyone is putting fear into you with the whole 'the doe will reject her babies if you touch them' and 'reject orphan kits if you don't put vanilla on their nose' but it's not like that!!
I had a doe take in a 3 week old baby with no issues at all!
She didn't even really look at it and It ended up being her favorite one too

Everyone is doing well and the does are ok with me peeking into the nests at least twice a day. Paprika has 3 kits: 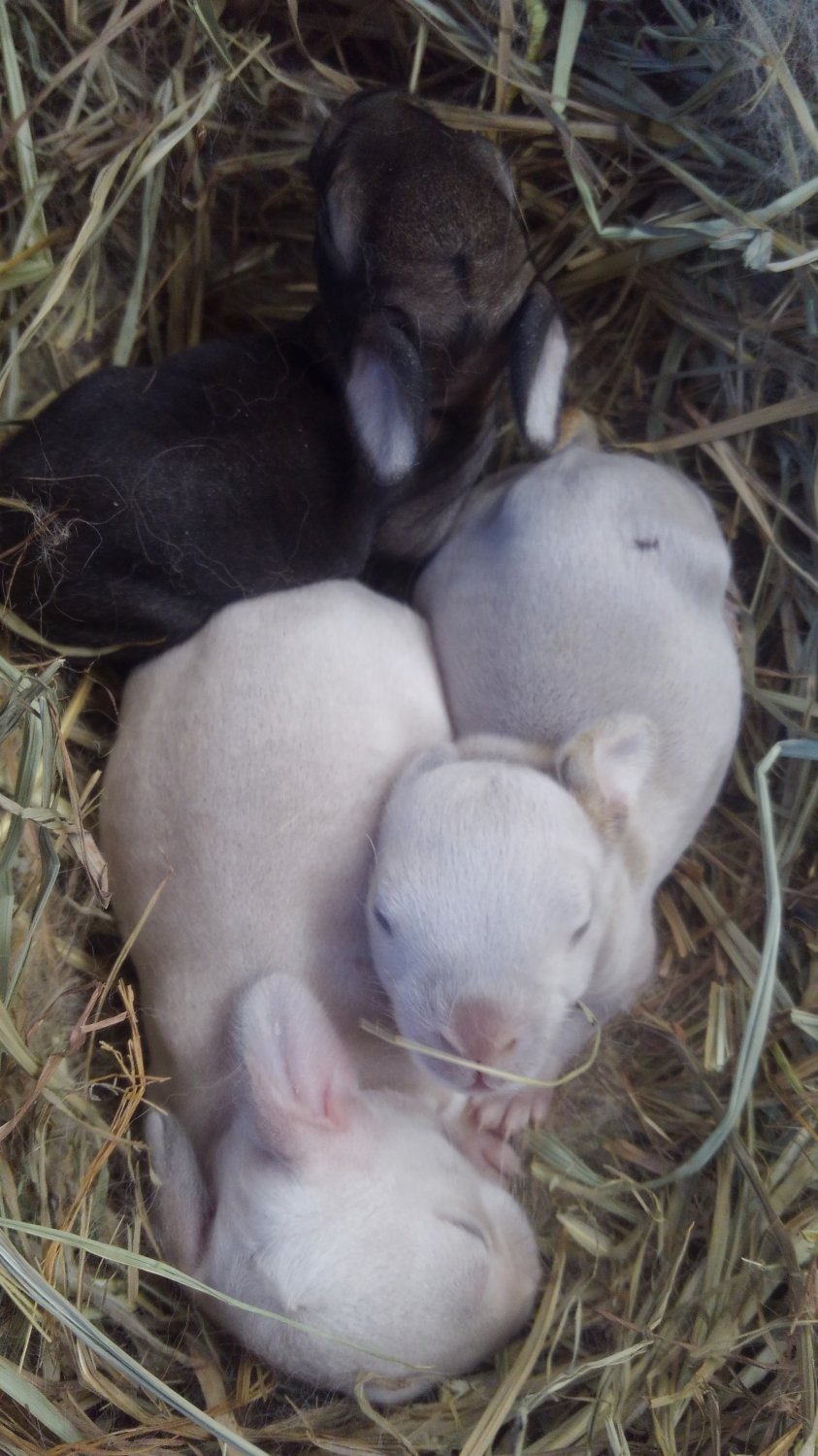 Cinnamon has 4 kits, the big white one is the one Paprika gave birth to. All the other kits are Cinnamon's. 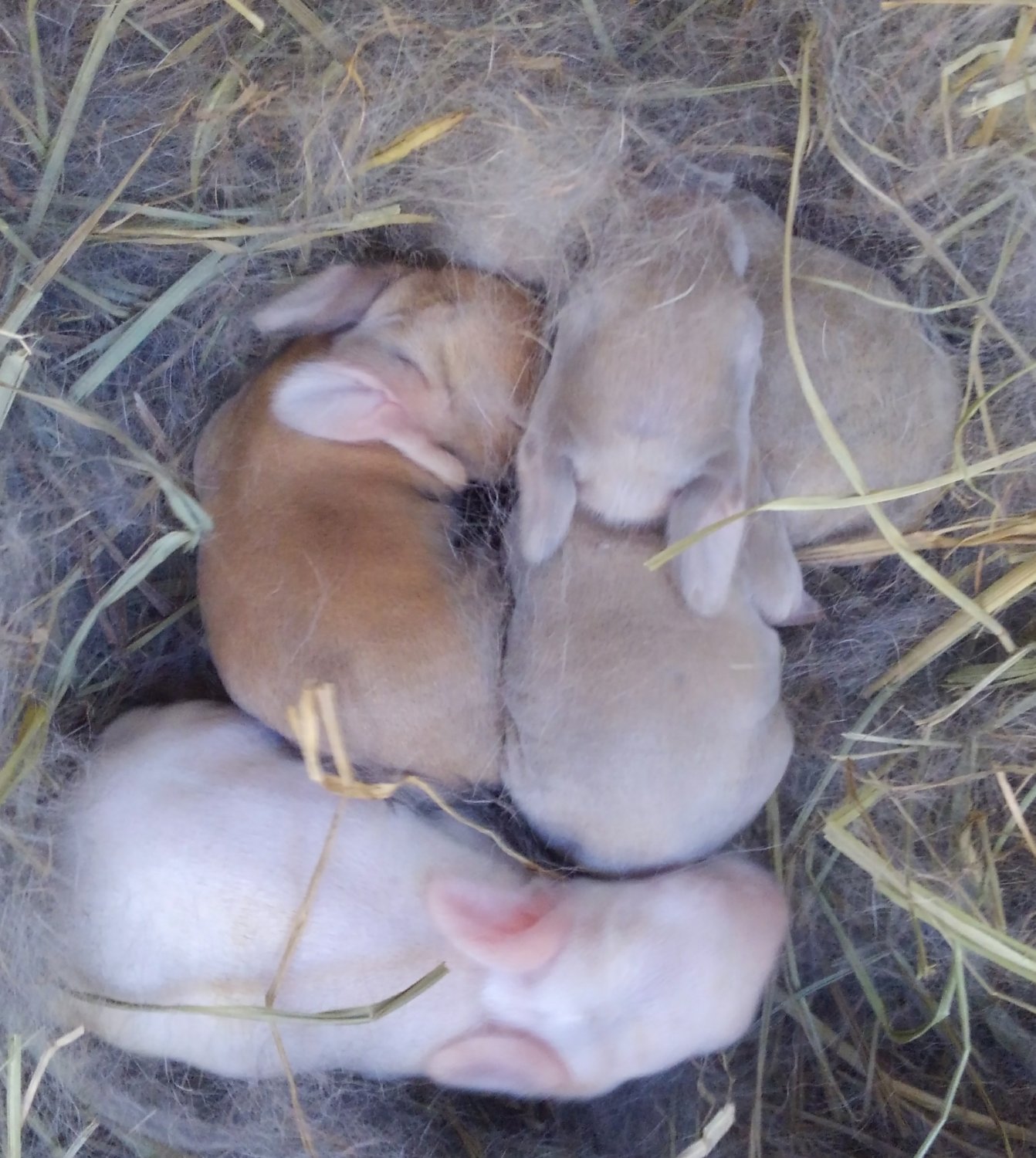 I think I'm seeing 5 colors from Cinnamon's kits? One is black, one looks buff colored, there are two pale gray/brown ones, an off-white, and a light gray. I am still learning the Rex colors, so I'm probably not calling them by the right names. I think some are dilute colors though.

The darkest one in the picture looks like a Castor (called chestnut in other breeds)
Paprika's big baby will either be REW or BEW...and there's a Red in that picture too
They're adorable!!

Thanks for the clarification on the colors, I looked again and you are right, the dark kit looks like a castor. It totally looked black when the fur was just starting to come in. Paprika's kit should be REW, the dad Frost is REW and I guess Paprika has Cc.

I just wish more of her kits survived, I think two or three were white and the others had a pale color to them. Now I have to wait until after summer for the next set of babies.