Sadly I just finished burying the little guy. I held him to his last breath. I knew it wasn’t meant to be. Opal knew too, as he was going she kept coming over and sniffing him. I gave him a little grave under my special ash tree. 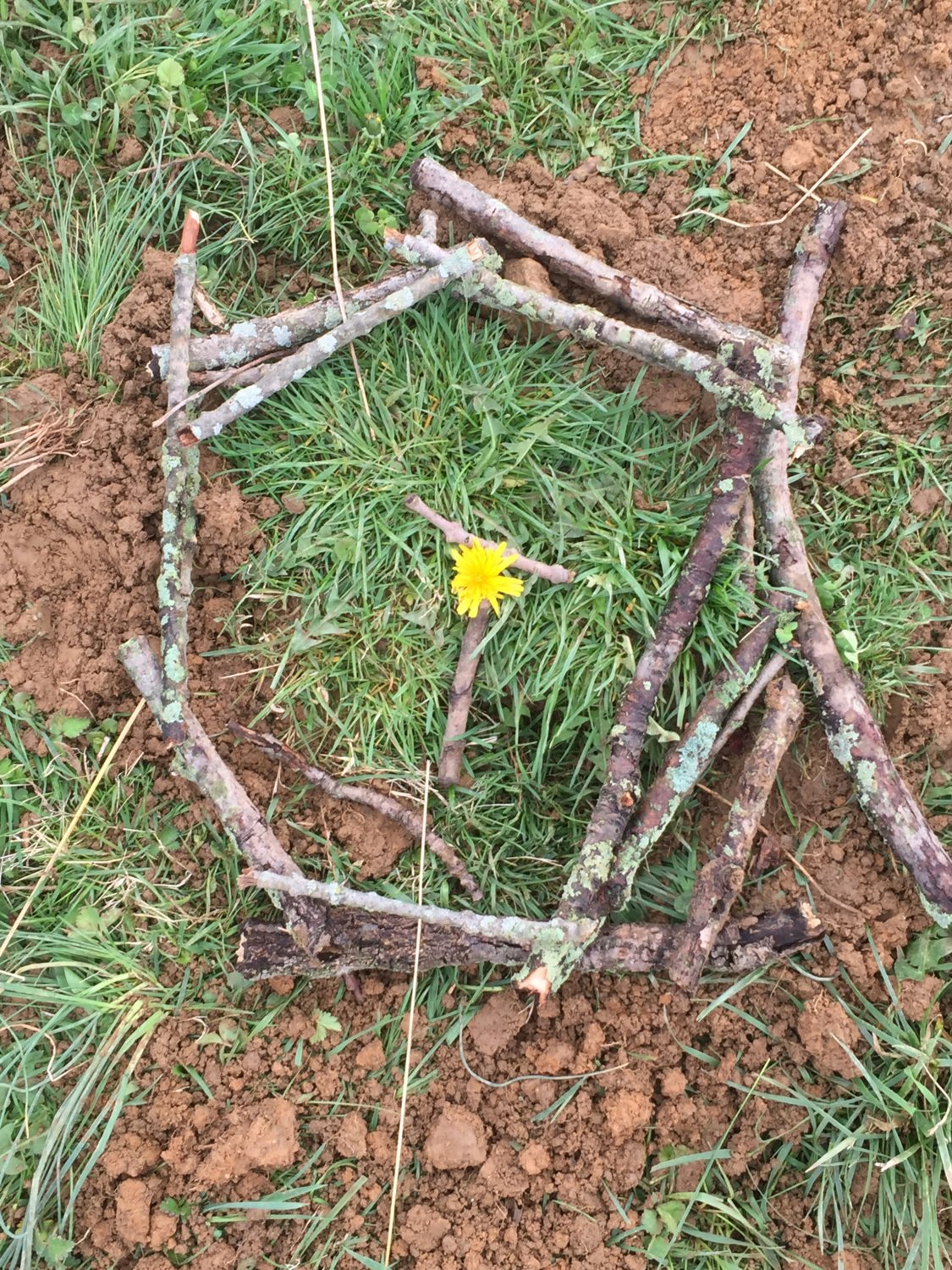 Sorry he didn’t make it

So sorry for your loss!

Does there seem to be a preference for blondes over swallows?

It's always hard to lose babies. I hold my lambs until their last breath. I get it. Sorry you lost him.

Thank you all for your kind words, truly

Rayla farrowed tonight, she is exhausted and I pulled my first baby. It sounds strange but its something Ive always wanted to do. Anyways im exhausted but I will update later dont worry!

Rayla started going into labor late Saturday afternoon. She got very pissy and pushed Opal and her brood out of their corner so she could have the entire space to herself for nesting. Opal’s babes got pushed into an area with barely any straw. So I gave them some more only for Rayla to steal it for her nest. Rayla spent about 1.5 hours on her nest, before she started laying down and getting up, trying to get as comfy as possible. Pushing started around 7 PM and after I saw the first bloody discharge the first piglet arrived a little after an hour. The second piglet arrived shortly after. The two piglets were both gilts and very large at that. I knew however that there was at least one more baby in there. She started pushing the third piglet about a half hour later, and so me and my dad waited. It was getting late at this point and my dad was getting cranky but something told me to wait for this baby. He kept telling me “its time to go” but I refused to move. Eventually the battery for the light in the farrowing shed went out so I had to get a flashlight. At this point my dad had gone to wait in the truck and I was starting to get worried as it had been about 40 minutes of hard pushing with no baby. See Im a very anxious person and I overanalyze every detail but my gut was telling me I needed to see what was going on. I used my hands to open her vulva as far as I could and I shined the flashlight to see what we were dealing with. I saw a tongue and a nose and I immediatly knew that this was one big baby! I held her vulva like this for about 10 minutes watching on each push to see if the baby was moving down at all. It wasn’t and I knew that Rayla needed help. It was about 10 PM at this point and I ran out to my dad to inform him of my discovery. He actually started his truck when he saw me only to realize I was headed straight back out. I grabbed a bottle of iodine and a glove from out medicine cabinet and I headed back out to Rayla. I lubed up and went in to feel what was going on. They often say dont go in if you are inexperienced but at this point I have read hundreds of articles and watched dozens of videos on assisting delivery. I was afraid as I didn’t want to mess up but I also knew this baby wasnt going to get out alive on its own. I knew I had to be firm but also gentle. The baby was in the birth canal so I really didn’t go that far only up to my wrist. I could feel the piglets head was past the pelvis but the shoulders weren’t. I could also feel the baby was alive as it periodically opened its mouth and wiggled its tongue. When I went in it stimulated Rayla to push, which was good as she was very tired at this point. I cupped my hand over the top of the babies head and pulled it from behind the jaw. Rayla pushed as hard as she could and I pulled but the baby wasn’t moving. It was jammed in there and I’ll admit at one point I got discouraged. Me and Rayla worked together for about 10 minutes before finally the shoulders come through and we got the baby out(more like it flew out). The relief from Rayla was instant. She had been pushing for so long that the placenta shot out right behind the baby. The baby was a boy, alive but definitely not ok. He was panting just like the lil guy we ended up losing and he was very weak. I rubbed his sides down with straw and sweeped his mouth for any fluid. I placed him at the teats to see how he was fairing, lethargic, head down, and panting hard. No way was I losing this little guy. I supported his torso and help him upside down because I realized he had most likely swallowed fluids during the labor. After a few swings I noticed his panting dimming down. I kept this up for a few minutes before seeing if I could get him to nurse, he was still weak. I continued swinging him and eventually drops of liquid came pouring out of his mouth. So much so I could feel it soak through my pants leg. I put him to nurse and he was trying, however he was still panting. I swung him about 5-6 more times even shaking him at one point to get the fluid out. And finally he stopped panting and was trying to move around and nurse. I knew then that I could go home. I think I stayed awake for dinner and that was it, I was out after that.

Here is the lil troublemaker in all his glory 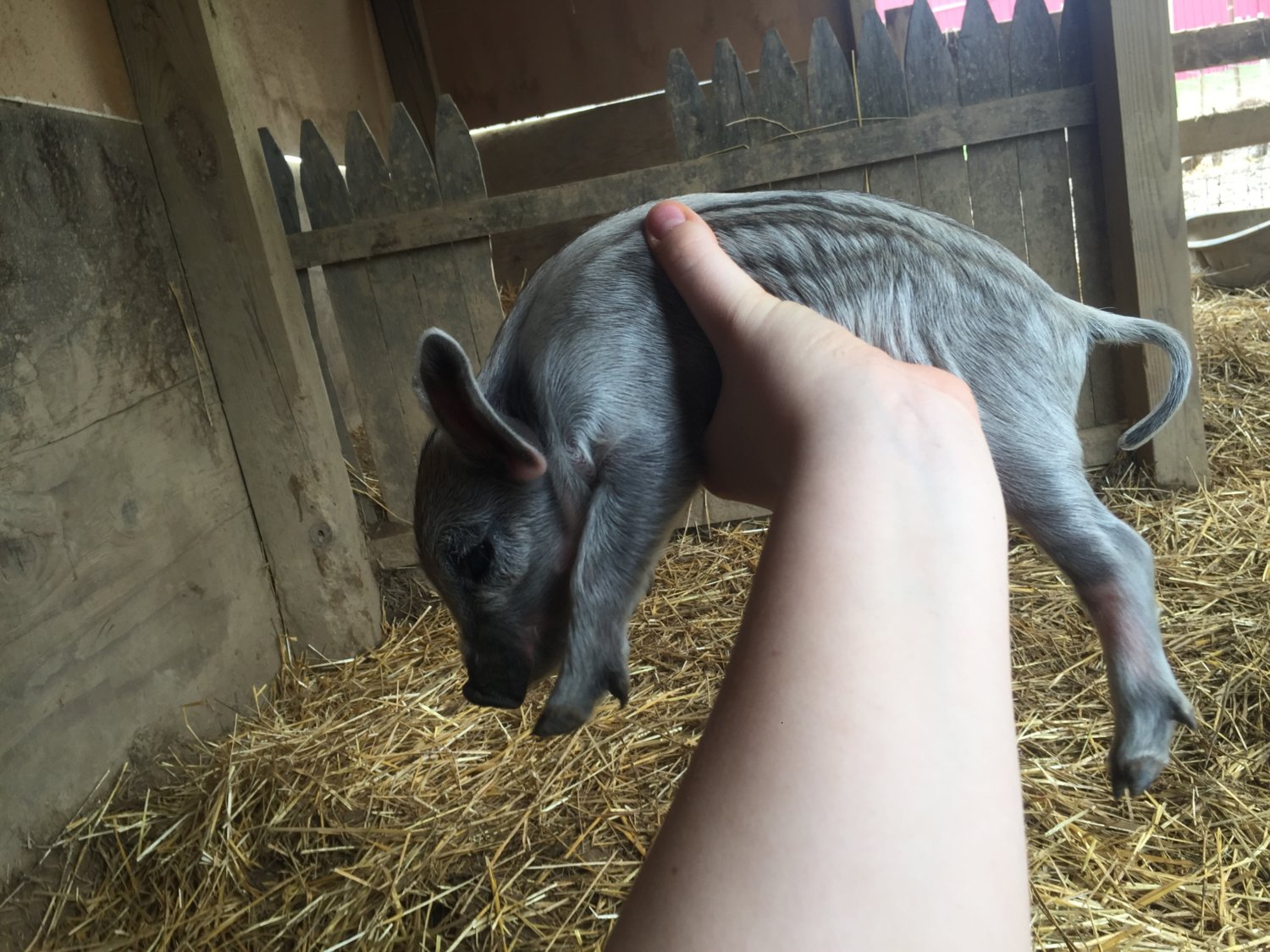 All mommas are doing amazing, all the babies are mixed in now and the girls take turns nursing them. 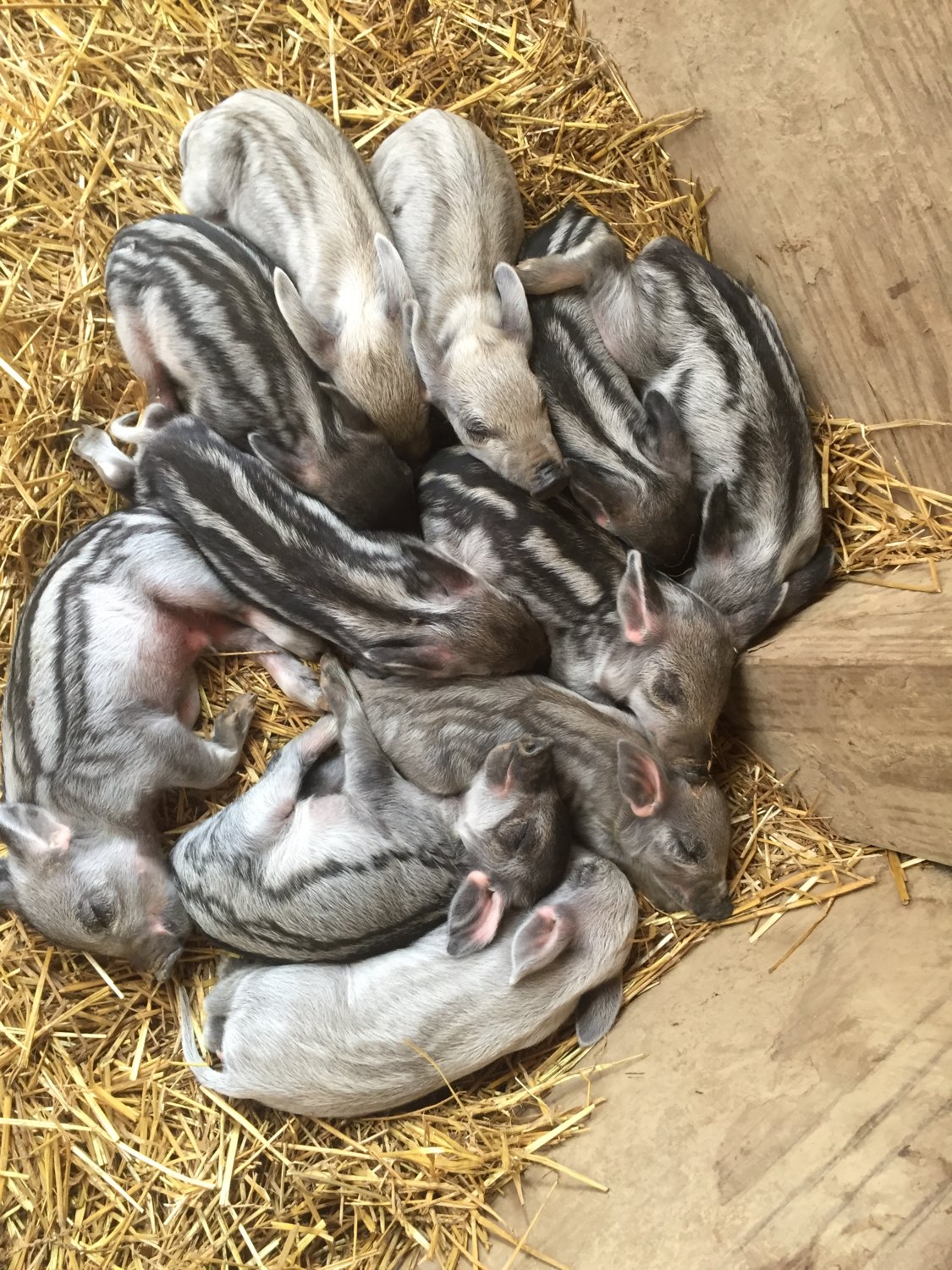 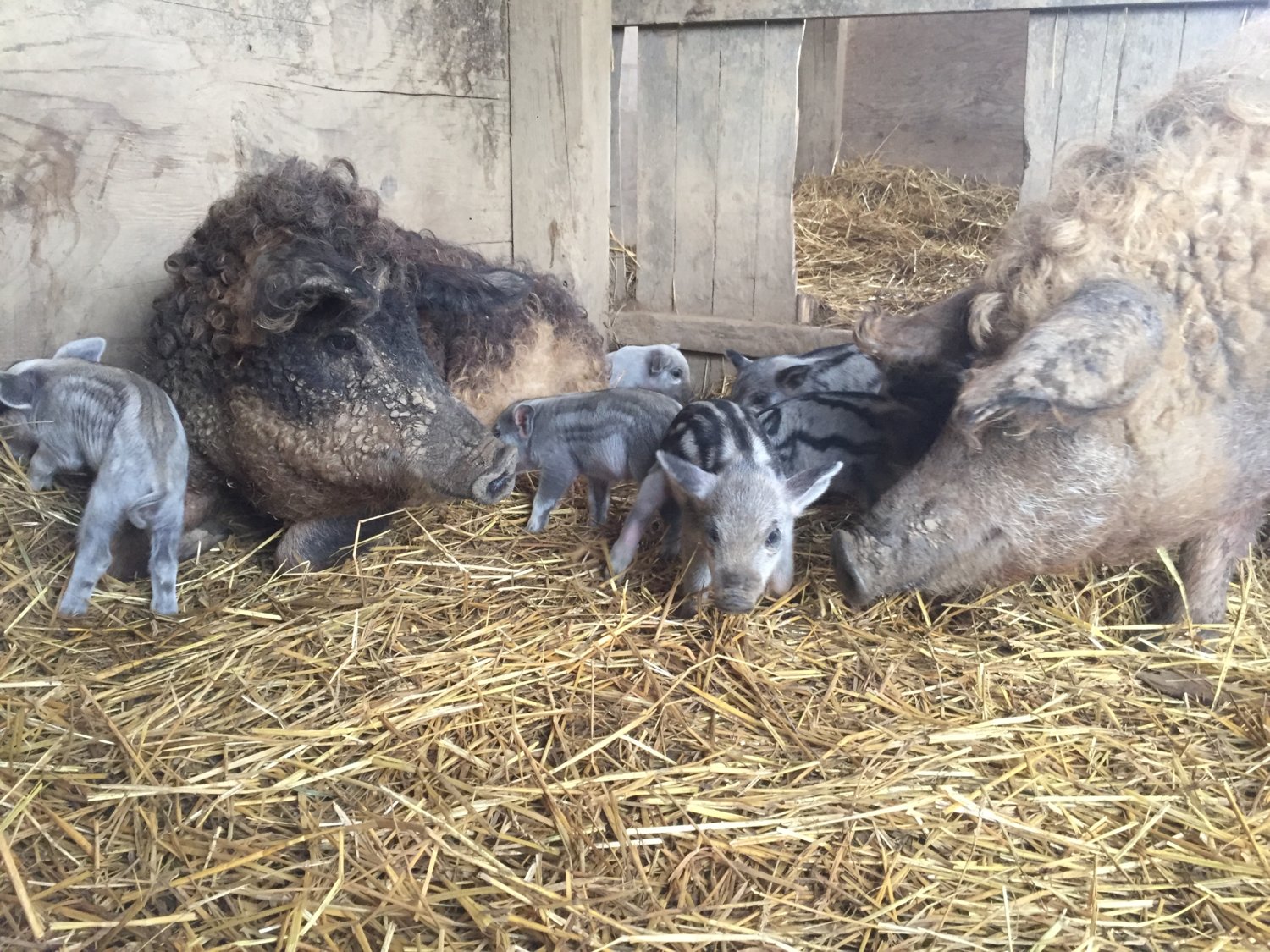 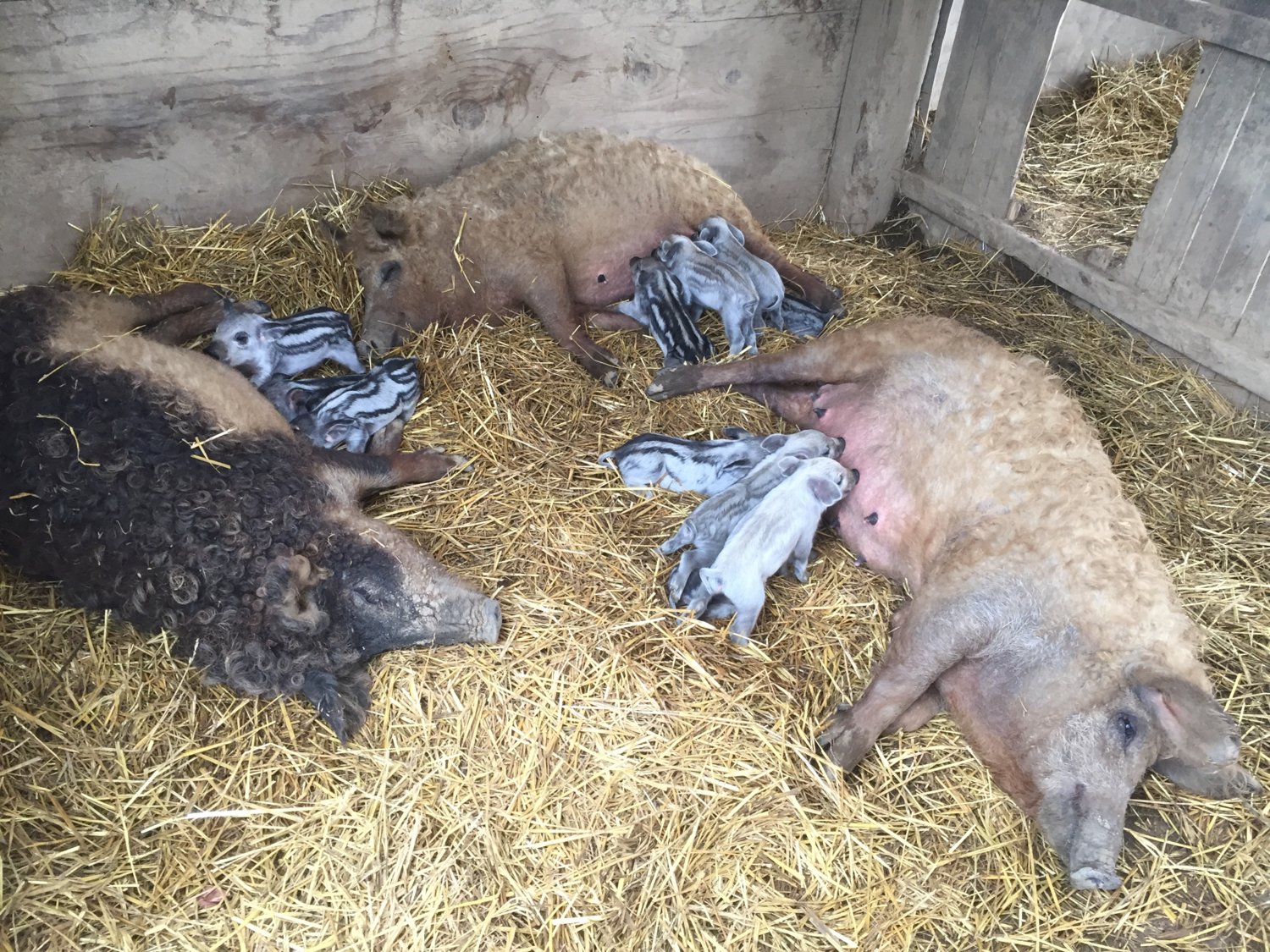 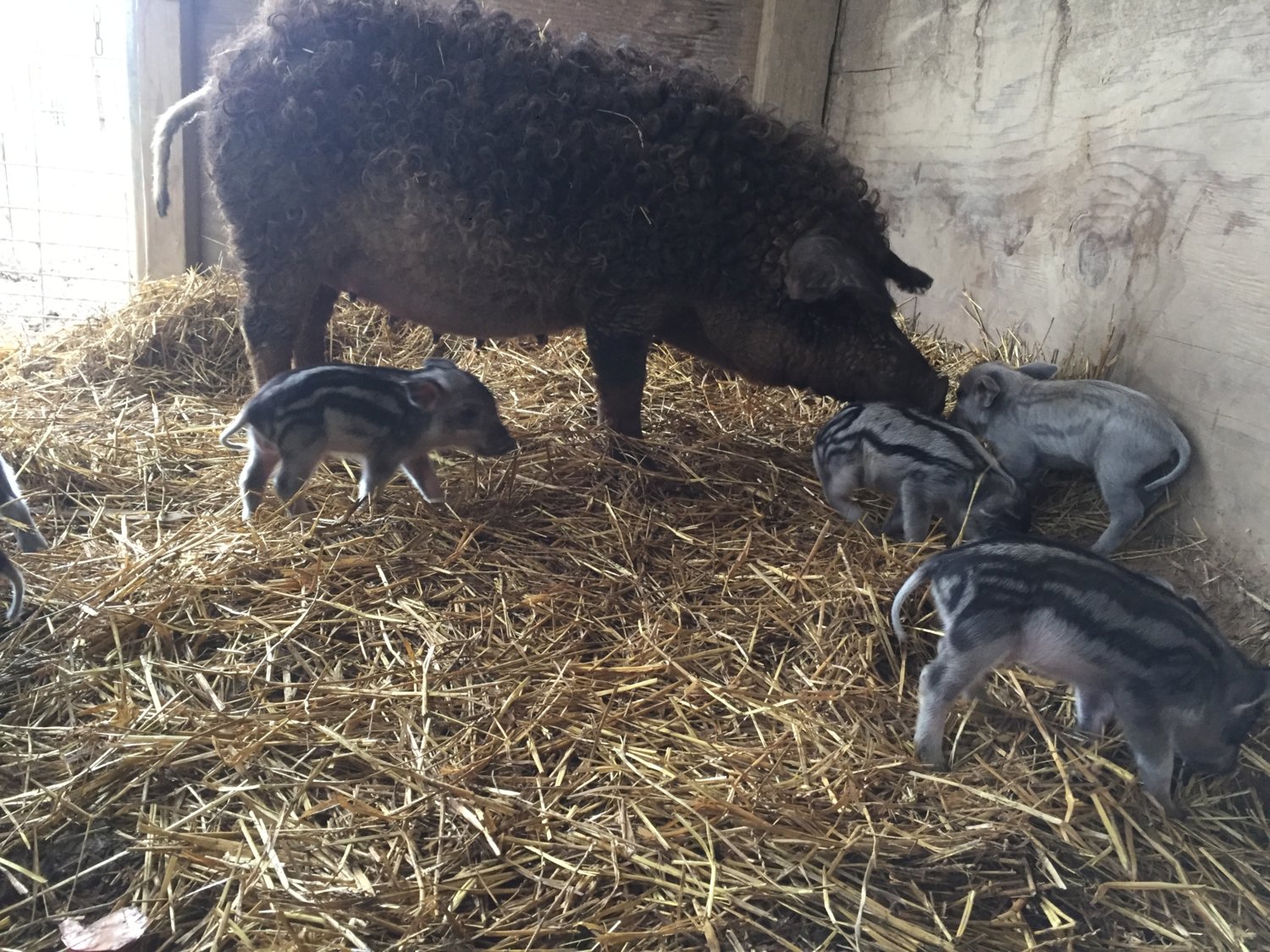 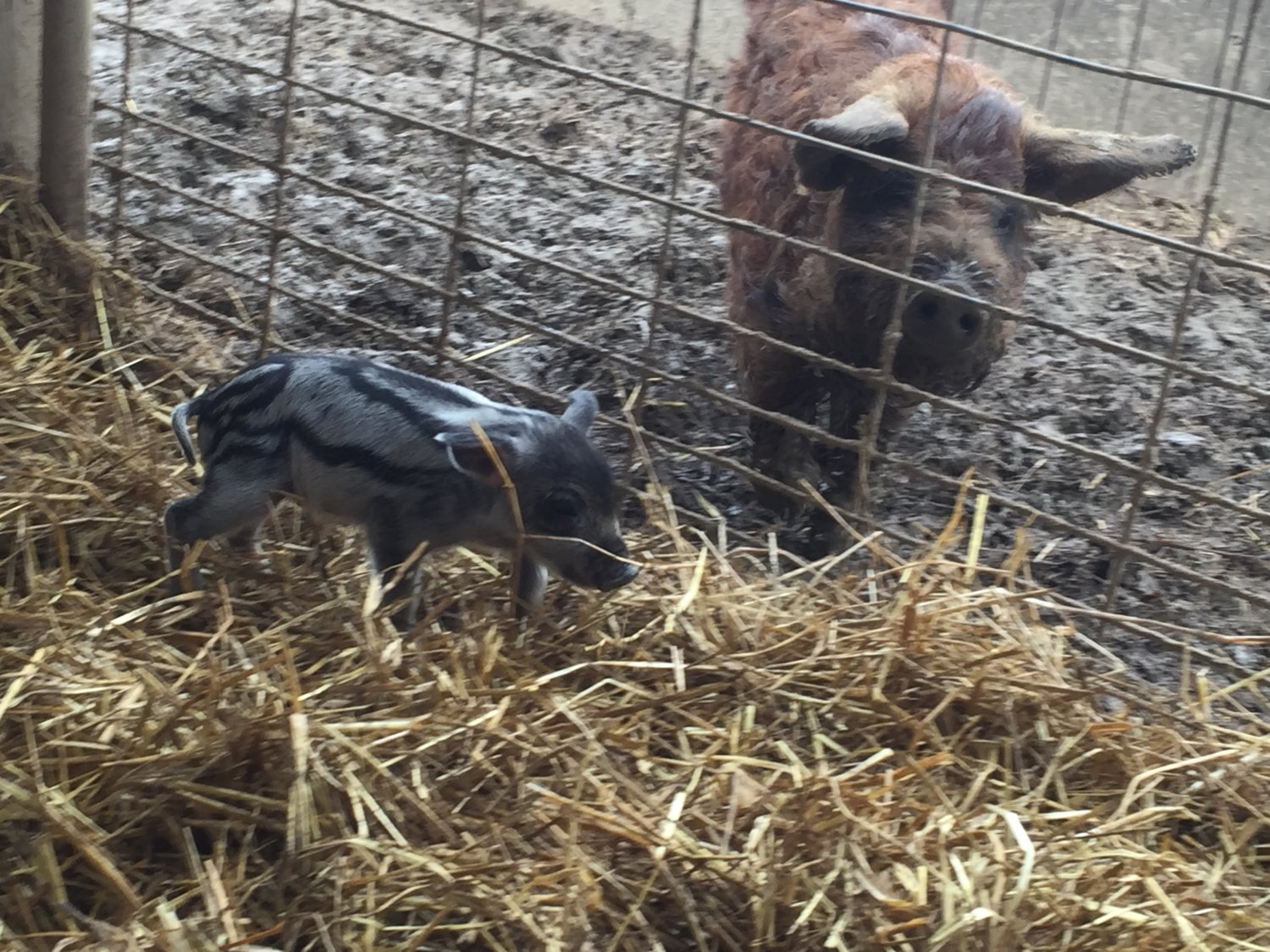 I also wanted to say that there were exactly 13 babies born between the three girls, even though we lost two. This was the exact number of babies we lost in the winter time. We feel truly blessed with these little ones.

Wehner Homestead said:
Does there seem to be a preference for blondes over swallows?
Click to expand...