Congratulations on a job well done and keeping your cool !

I bet your Dad was glad that you insisted on staying. Y'all would have lost the piglet and Rayla too. Good job on saving BOTH of them!

Guys i have some crazy news. Im in shock about it myself. My little baby Lucy was hiding a pregnancy, but today as I gave her some well deserved rubs, I saw/felt babies moving. If she takes after her sisters, it should be about 3 wks before she farrows. Im nervous because she is my baby, but she is a big girl now.

Why that little hussie!

So last week I left for a few days on a trip to the NJ FFA convention. I was gone Weds-Fri, and I told Lucy she better wait until I get home to have her babies. Well in typical Lucy fashion she didn’t listen and Friday afternoon when I returned from my trip my mom let me know that there was some drama at the farm. Lucy had farrowed Thursday night and when Erik(family friend) came to the barn Friday morning things were not looking good. So my dad met Erik about two months ago, as he bought a few pigs from us. They quickly became best friends and now Erik is doing everything in his power to help me keep our farm going. Erik told me that when he arrived Lucy was plopped in the worst spot and that he was only to save 2/7 babies. I couldn’t believe she was hiding 7 little ones. He told me he performed mini CPR on the piglet with lighter stripes so he naturally got naming rights. The other piglet needed to be stimulated but was much stronger than the other one. However the drama wasn’t over yet because Lulu was being a straight up jerk to her little ones. Erik pulled them and waited for me to return home to see if I could get her to accept them. The first thing I did was get Lucy out into the grass because its a very stress relieving behavior for her. I could immediately tell she was stressed out beyond belief. She didn’t even want to get up at first but I coaxed her out with an apple. Once I got her in the field I tested her reaction to the babies. It was not good and when they got close to her, especially near her face she would lash out at them. I knew my best bet was to get her to lay down for belly rubs and get the babies to latch on. I did this for over an hour before deciding on moving her into the barn. The good news was she let them nurse and even talked to them. Bad news is that once she got up she got aggressive with them again. I was exhausted from my trip and after talking to another farmer and doing my own research I decided to separate the babies for two hours as they would need to nurse again. So I went home, took a nap, and hoped that the time apart would let Lucy calm down. I put the babies back in with her that night and she was much better tempered but still not in “mommy” mode. That night I made the decision to leave them with her and prayed for the best. I got up extra early to check and when I checked on them not only did I find the babies safe and sound, they were all cuddled up next to Lucy. And minutes later I found her nursing her wee little ones on her own. She has been doing amazing with them and they are such lil cuties

This was before she had accepted them, 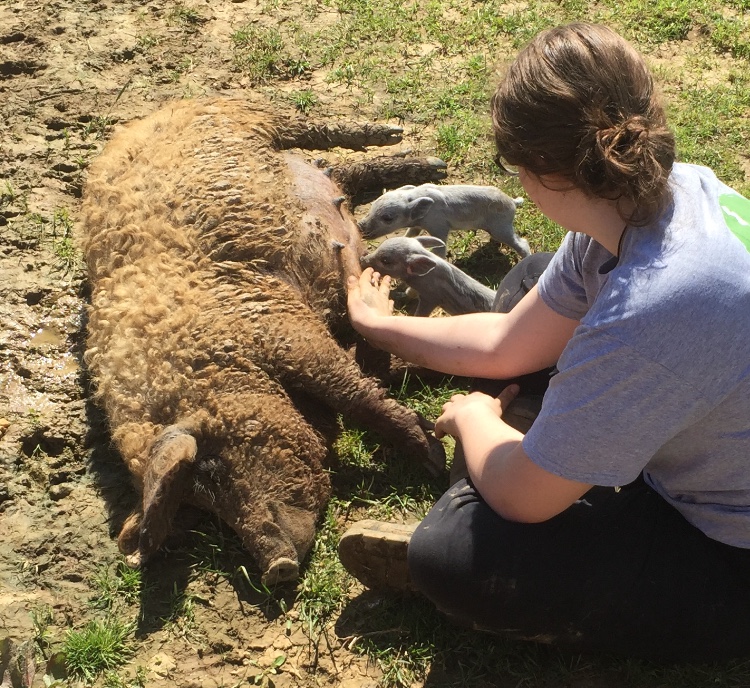 Such a good Luce, she had accepted her babies at this point. 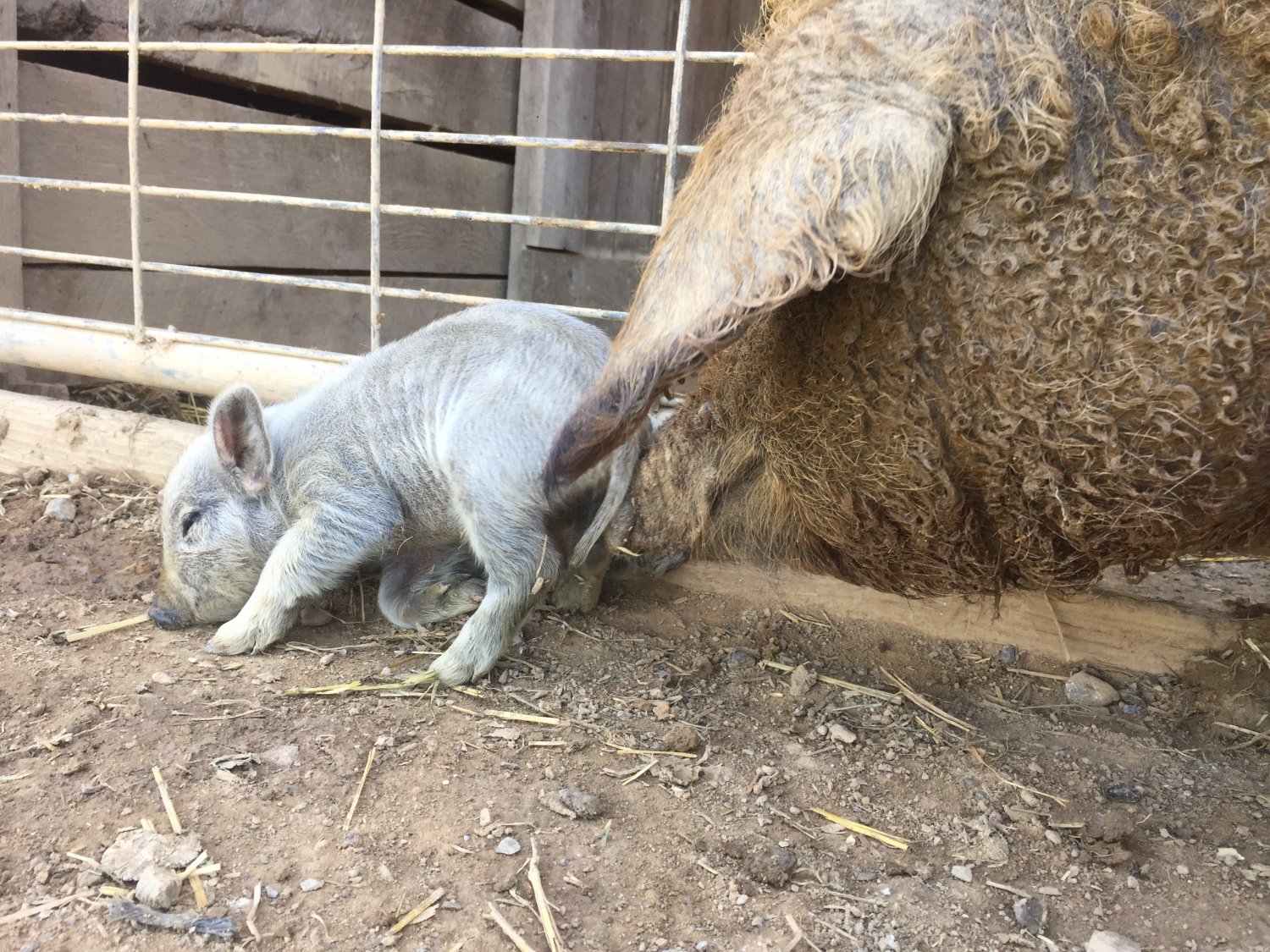 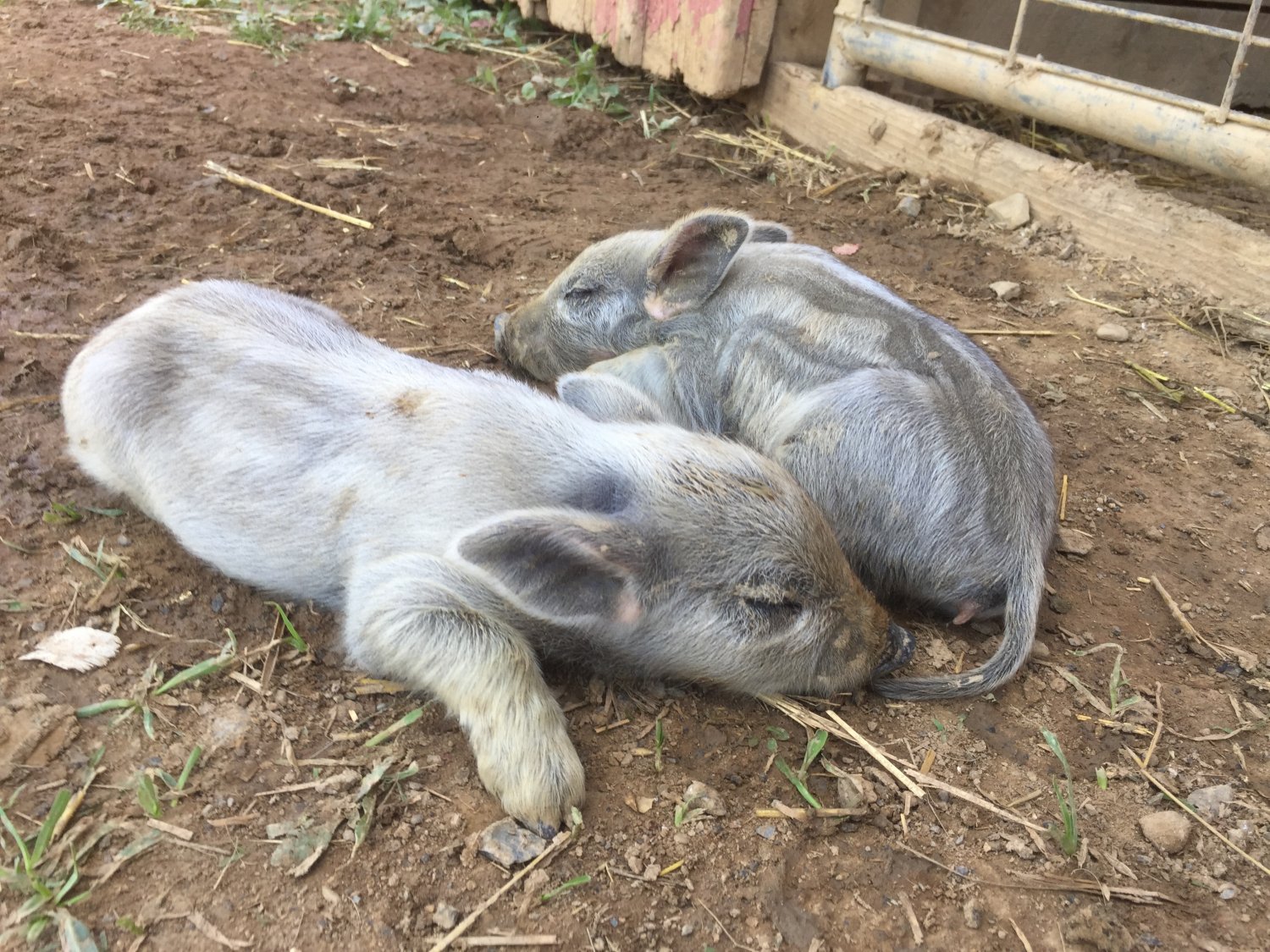 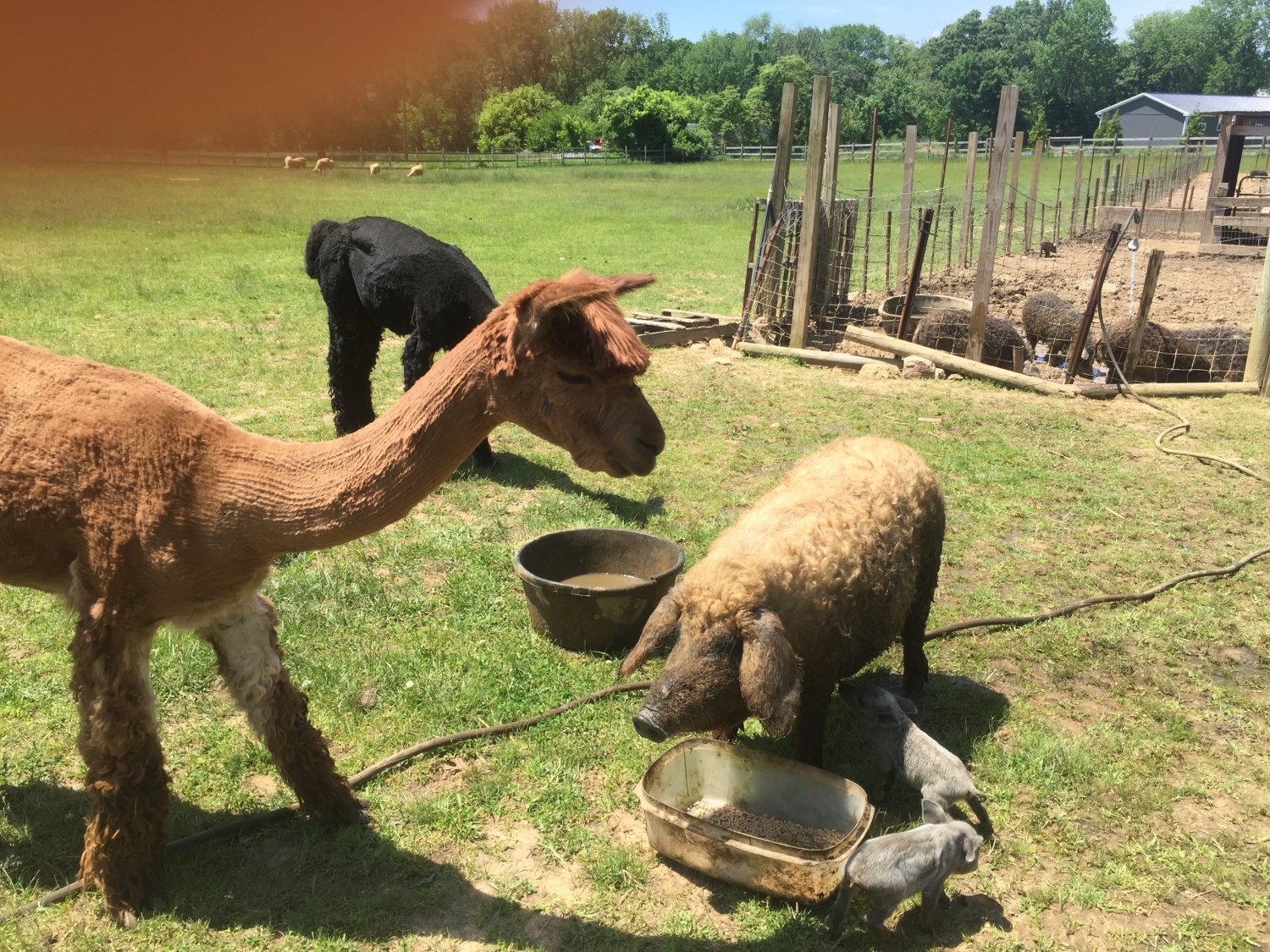 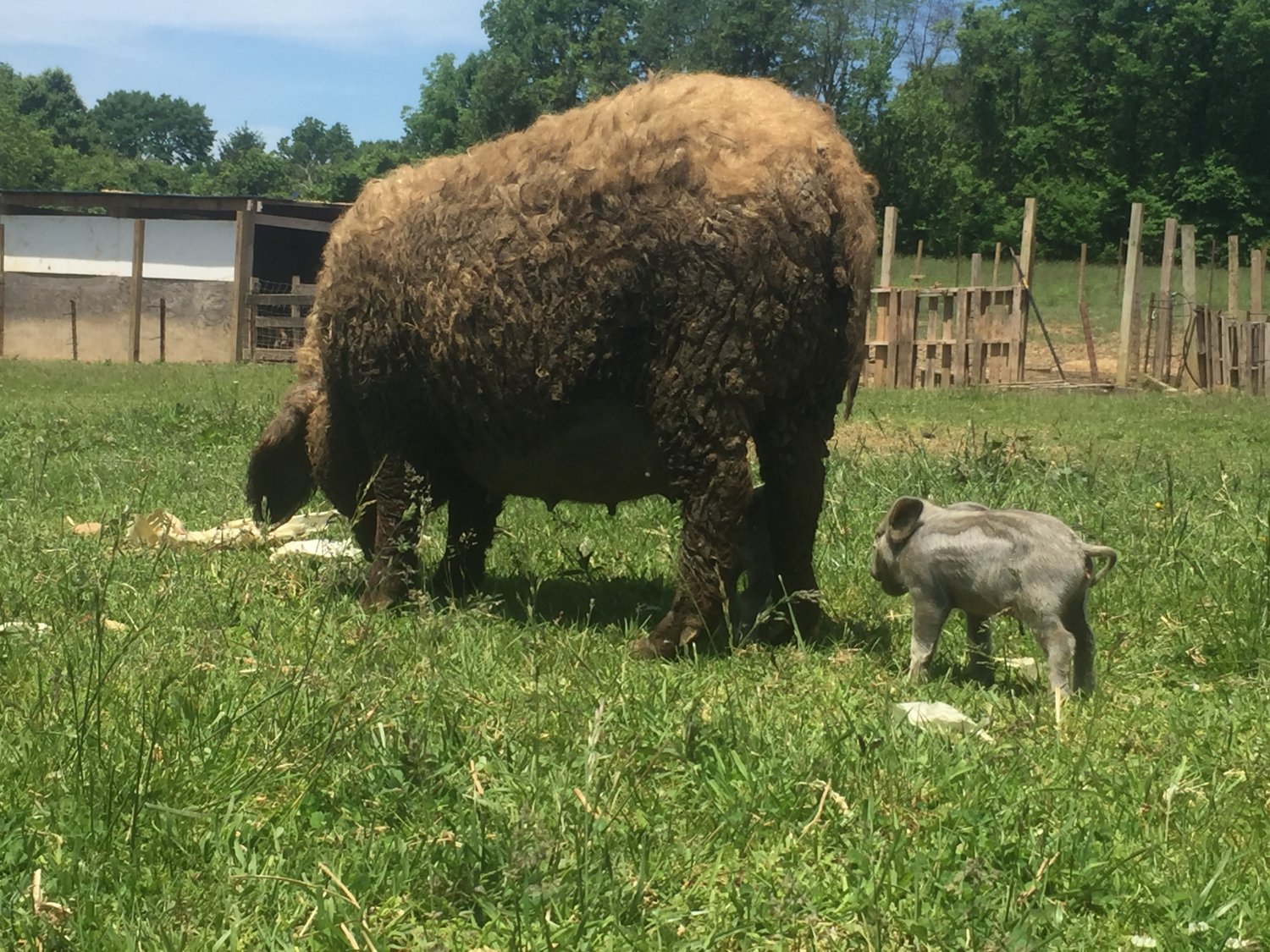 Prissy farrowed tuesday evening. I had, had a long day and was going to check on her. She already had three babes on the ground and was in hard labor. I did get concerned at one point as it took over an hour for piglet #4 to arrive, however I believe my arrival caused her to stall her labor. Priss let me in the stall to pet her and help clean off noses and clear out mouths. I left at 9pm and she had nine dry and nursing. She had also passed a small placenta. But just like her first litter she snuck two more babies and so she had 11. One did die, not sure how but the rest are doing phenomenal. 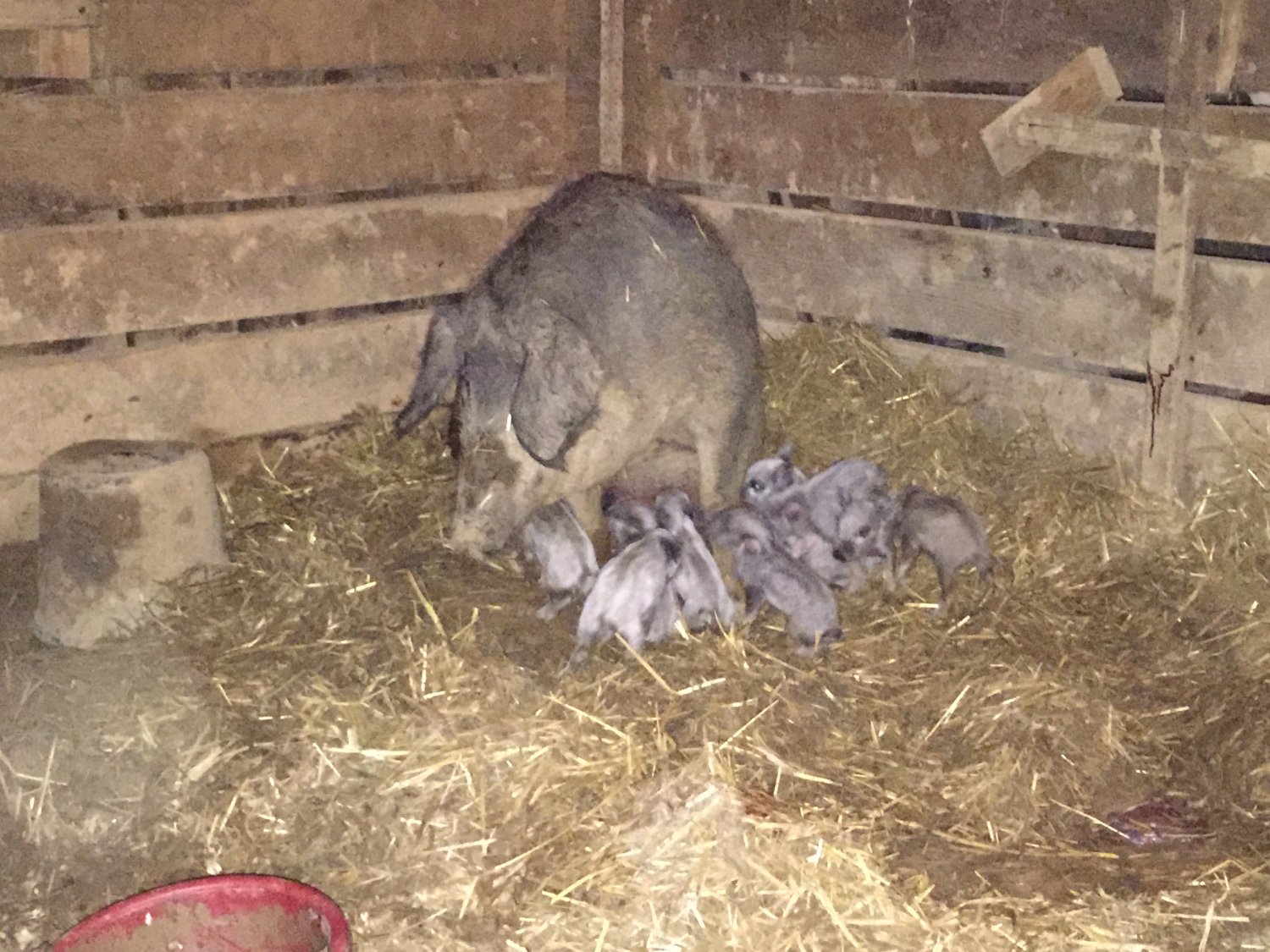 Go Prissy! She's being a good mama. Sorry Lucy got off to a slow start - but great that she came around!

and help when needed