Well, she's definately filling out in those sides!

Are the pigs moving also? Like all your animals are moving? Is it close to the other farm?

Will you be living at this other farm as well?

We've missed your posts. Hope you can visit more often.

Look at that lush grass, the sheep are gonna love that! Are you moving the pigs too?

Please do tell us about the new place and circumstances of the move!

Clover lambed Monday morning at 10AM with giant twins. Both looked the same size as Simon when he was born. The first born is a lovely ram lamb who is all legs, the second born was of course a DOA ewe. The ewe lamb was probably, 2-4 weeks behind in development, had no eyes, and all the soft tissues were reabsorbed so she was like jello. I helped deliver her as her feet were tucked under her belly, and I could tell something was off when I first saw her coming. She was huge, just like her brother and such a pretty little girl. It was sad but it happens. I let Clo sniff her before taking her away.

The little rams name is Mochi and he is super precious. Although its been a few years since Clo had lambs she is still an exceptional mother. Only problem is she always gets upset when I try to snuggle Mochi, she probably thinks Im taking him or something. 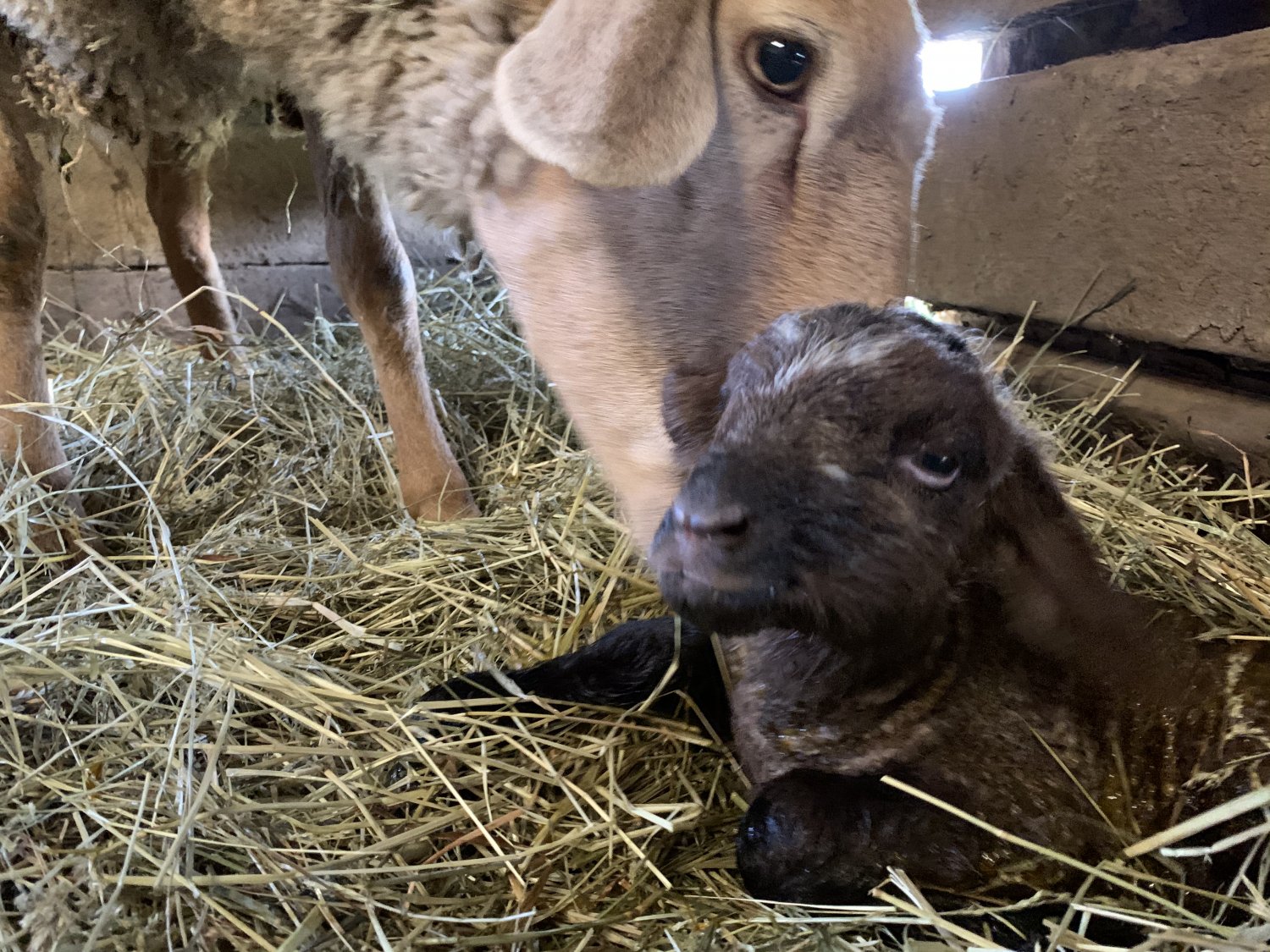 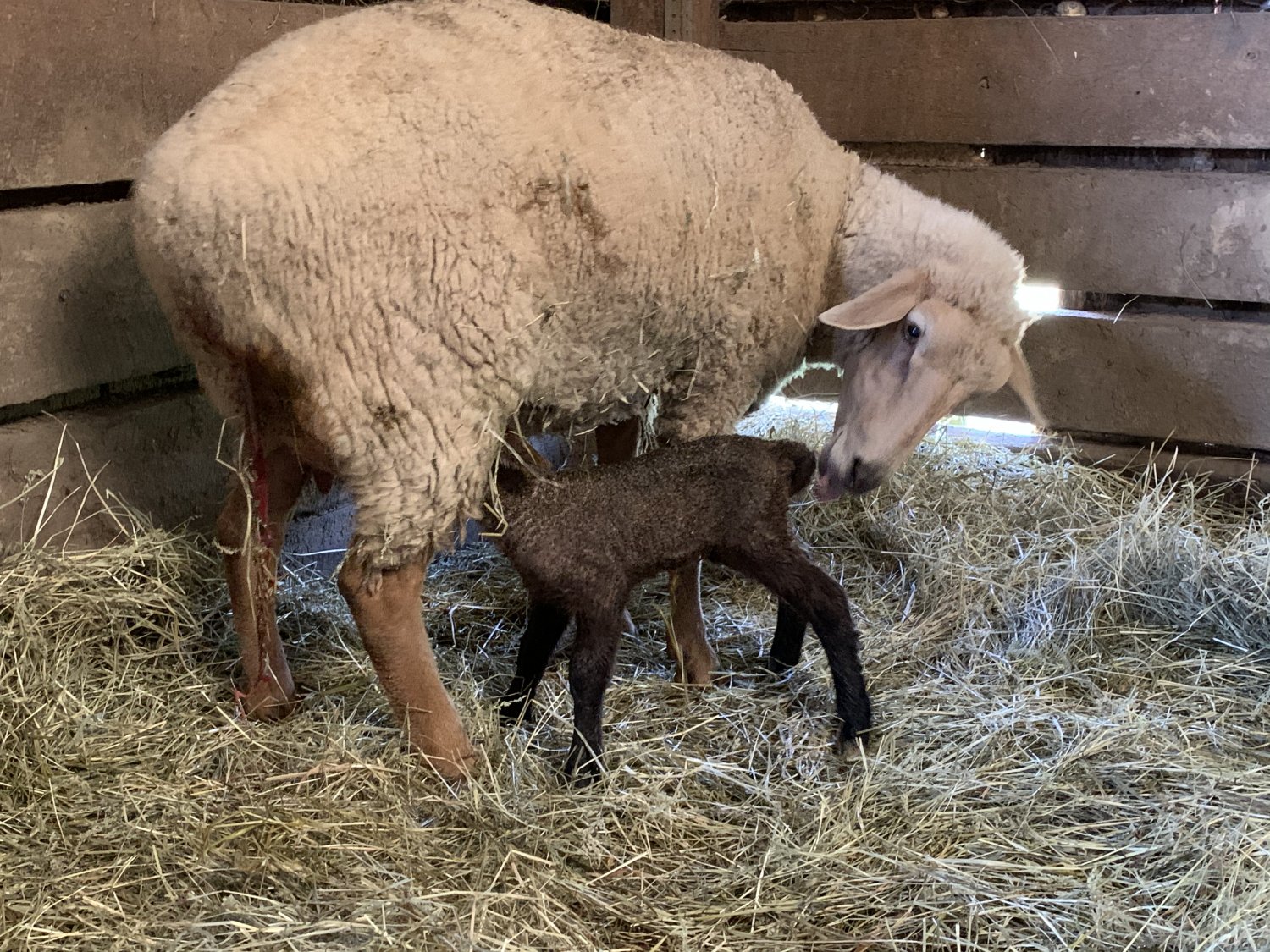 *panting* must...snuggle...mochi...
But seriously, he's super cute, and has a perfect name. Congrats!
And sorry about the ewe lamb.

birthing animals is not for the faint of heart, eh? Too many mixed feelings.

Good girl Clover! Beautiful ram lamb she has there. Sorry about the ewe lamb. Of course, it is always the ewe lambs. One of my favorite ewes had twins a few years ago, 1 a big healthy ram lamb and the beautiful ewe lamb was born with her organs outside her body and I had to put her down. @rachels.haven is right about birthing animals not being for the faint of heart.

I'm glad that you were there with Clover when she was giving birth. I know you probably averted a hard birth for her, helping to pull the ewe lamb. Good work by you and Clover.

Sad about the ewe lamb, learn something new every day. I've heard of stillborns but never anything like you described. Must be hard to see.

The ram lamb must be a Mocha Mochi from the color

Where do I even begin with an update. With the help of my Dad’s mason brothers we got all the hogs moved to the new property on Oct 3. I honestly cannot believe its been almost a month already. The hardest part was getting them in the trailer. Most of the sows loaded with some coaxing however to no ones surprise queen Lu was an absolute diva and refused to load. I tried every food under the sun but she wouldn’t budge. At one point i found her munching on some milk powder so O tried that but she still was being her hard headed self. So we grabbed some rope, got it wrapped around one of her legs while someone else grabbed the opposite leg, then we dragged her into the trailer. She was being incredibly dramatic and screamed the entire time. Once we got her loaded up we just had to get the boars loaded. However at this point everyone was exhausted and so I said “why don’t we try getting them in, if not we will do it another time”. As we assessed the situation I realized there was no way in hell that we were getting Atlas loaded without someone getting hurt.

Also side note I just realized I never shared my story of how Atlas cut my leg open. So it was a few weeks before farrowing was going to start. I had gone out into the field to go spend some time with the piggies and I went into the shelter because I have very low heat tolerance and I needed some cover. Atlas was walking into the shelter so I started giving him some back scratches. As I pet him he started angling his body into my leg which is something he does when he gets sassy. Well anyways he started getting really pushy and then he whipped around into my leg. His tusk cut into my leg like a knife in butter. I had to get 11 stitches and I was out of work for two weeks. And even better is even tho I was taking antibiotics, it still got infected and I had to get a shot in my bum. It was very difficult for me to walk for the first few days and now I have a permanent battle scar. 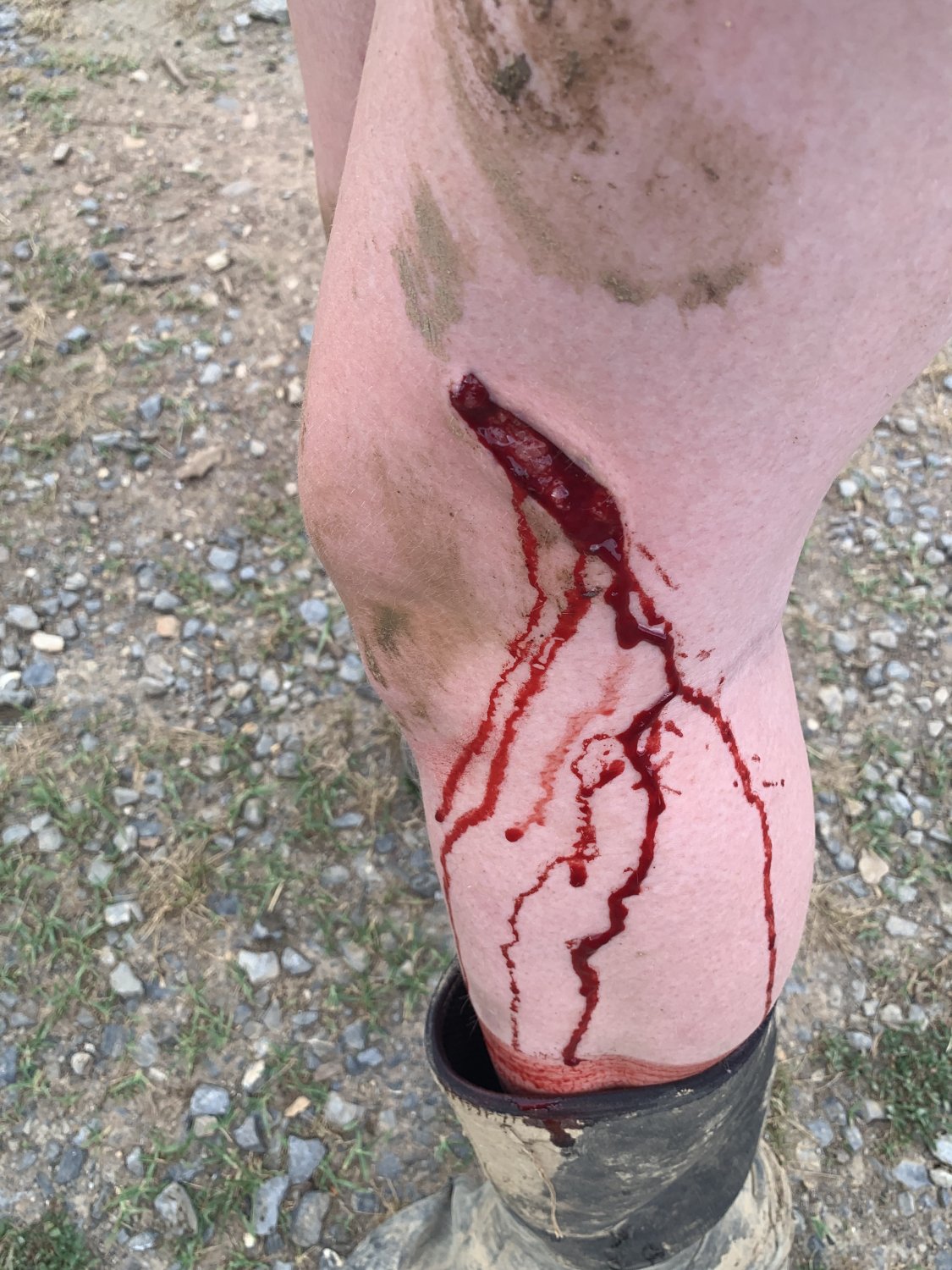 Back to loading the boars up. So I realized in that moment that I didn’t want to take Atlas with me and so I took his son, Salami, instead. He was hesitant until he saw ladies in the trailer and then he loaded up like no ones business. I talked to the owner of the farm and he said he would keep him and one of Lu’s daughters for breeding.


Now I know a lot of you have been wondering why I decided to move so suddenly. Truth is it all happened so fast Im still a bit in shock. It happened mid august when two loved ones told me I needed to step away from the environment at the farm. When the guy who bought the place(we will call him R) agreed to let me keep my animals it felt like such divine timing. However as I look back on everything I now realize how naive I was. I will forever be grateful to R for allowing me to keep my animals there without rent for over a year. With that being said I have now realized how much he had manipulated me in that time. It first started last summer with him saying I had to getting rid of half my sheep, I agreed to let him process Brutus and Stella and then for my ewes I would find a good home for. I tried finding my girls a new home but to no avail until one day R came to me saying he had found a home for the ewes. I should have realized what was going on when he told me they only wanted one at a time. He told me Rosie would be going to a good family and that they were picking her up that afternoon. That night I went for a late night check on the animals and as I pulled up to the barn I saw Rosie’s skin in a pile. The thing is he never apologized either, he just avoided me and I was so emotionally tired I didnt have the energy to be mad at him. When my mom called him out on it he said it was my fault because I didnt clean stalls. His whole thing was that “you cant have this many animals if you dont clean up after them”...And yet his calf stalls go unclean for months and he wonders why the die of respiratory infections. He talked me into selling the alpacas and always complained about how they ate too much and he didnt like their poo piles out in the field. And yet the 100’s of cow piles dont seem to bother him. He also kicked my sheep out of the field because “they bother his cows” when they are eating. In the beginning he took a bunch of the pigs to the butcher and yet I never saw any of the meat. Or last fall he told me the butcher wouldn’t take my pigs because they aren’t big enough. Right before the move R was going to make me sell all my pigs except three. In fact he talked me into selling 20+ piglets to someone who was going to feed them to snakes which that entire thing physically hurt my soul. I only got $150 bucks for all of them. Also his business partner has threatened to shoot all my pigs multiple times and doesnt like me at all. And while the manipulation was awful I think one of the worst parts about everything was the amount of death. I’ve lost track of how many bottle calves have died. So many dead animals. Dead calves in the dumpster, or a dead bunny that hasnt been taken out of the hut yet, 200+ chicks brought down to 10. I mean listen, farms always have loss but it was so constant with his animals. I am very sensitive to energy and what once was my happy place has now turned into something much darker. My dads legacy is with the hogs, and as long as I have them I’ll be ok. Every week R goes to the auction and brings back more animals and I honestly feel its going to turn into a hoarding situation.

When I realized all that he had done, I asked myself how could I have been so clueless. Looking back I was in survival mode and would do anything to keep my animals R saw that and used it to his advantage. All I have left is to find the sheep and alpaca a home and then I’m done with that place. The new farm is do much different and for the first time since my Dad was alive I had my new pig partner go in and sit down with the pigs and talk to them. He is very kind and helps on days I cant make it. The pigs are so happy and I finally feel that constant anxiety from the old place drifting away.

princess lu wallowing in the spring 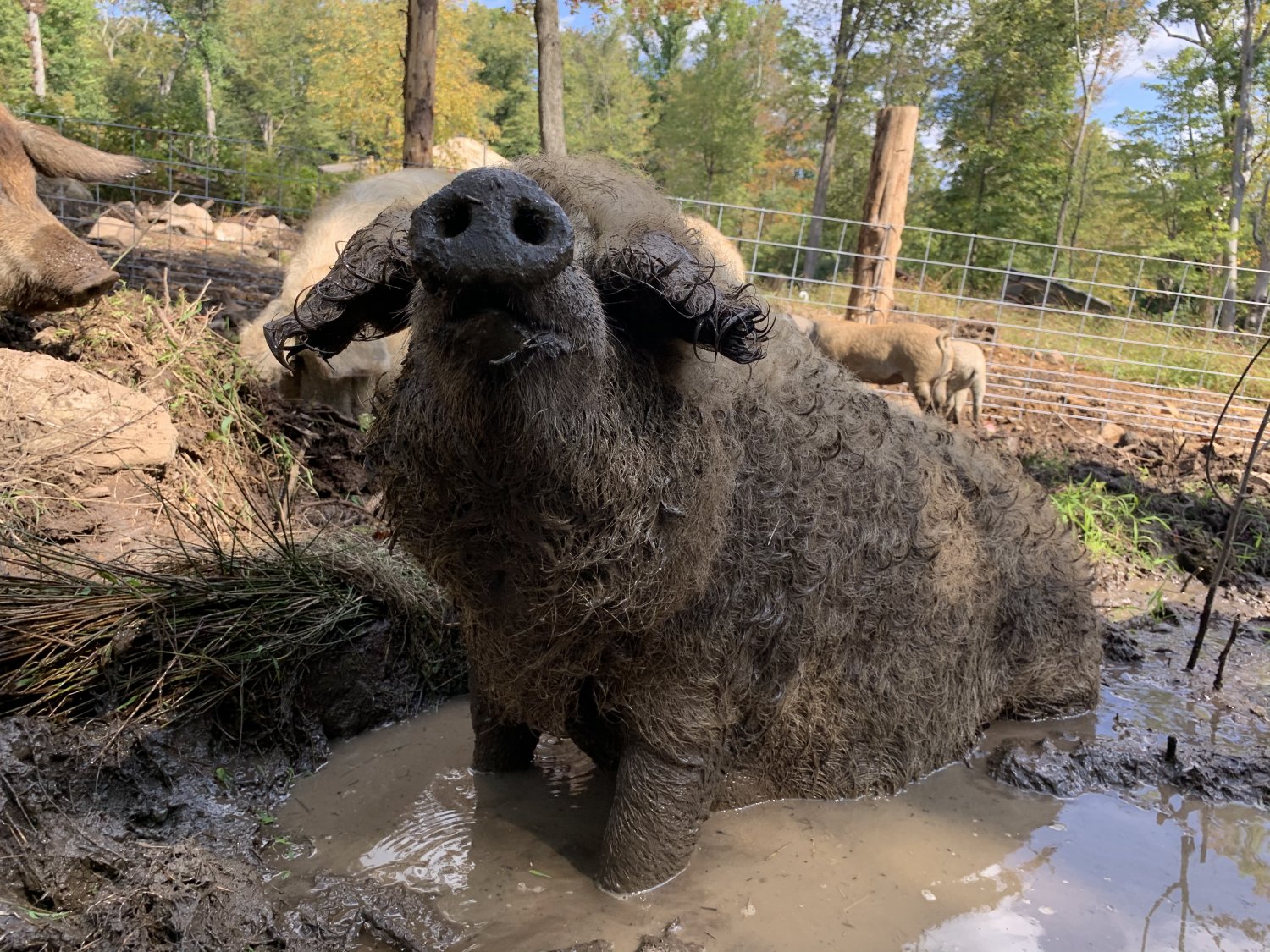 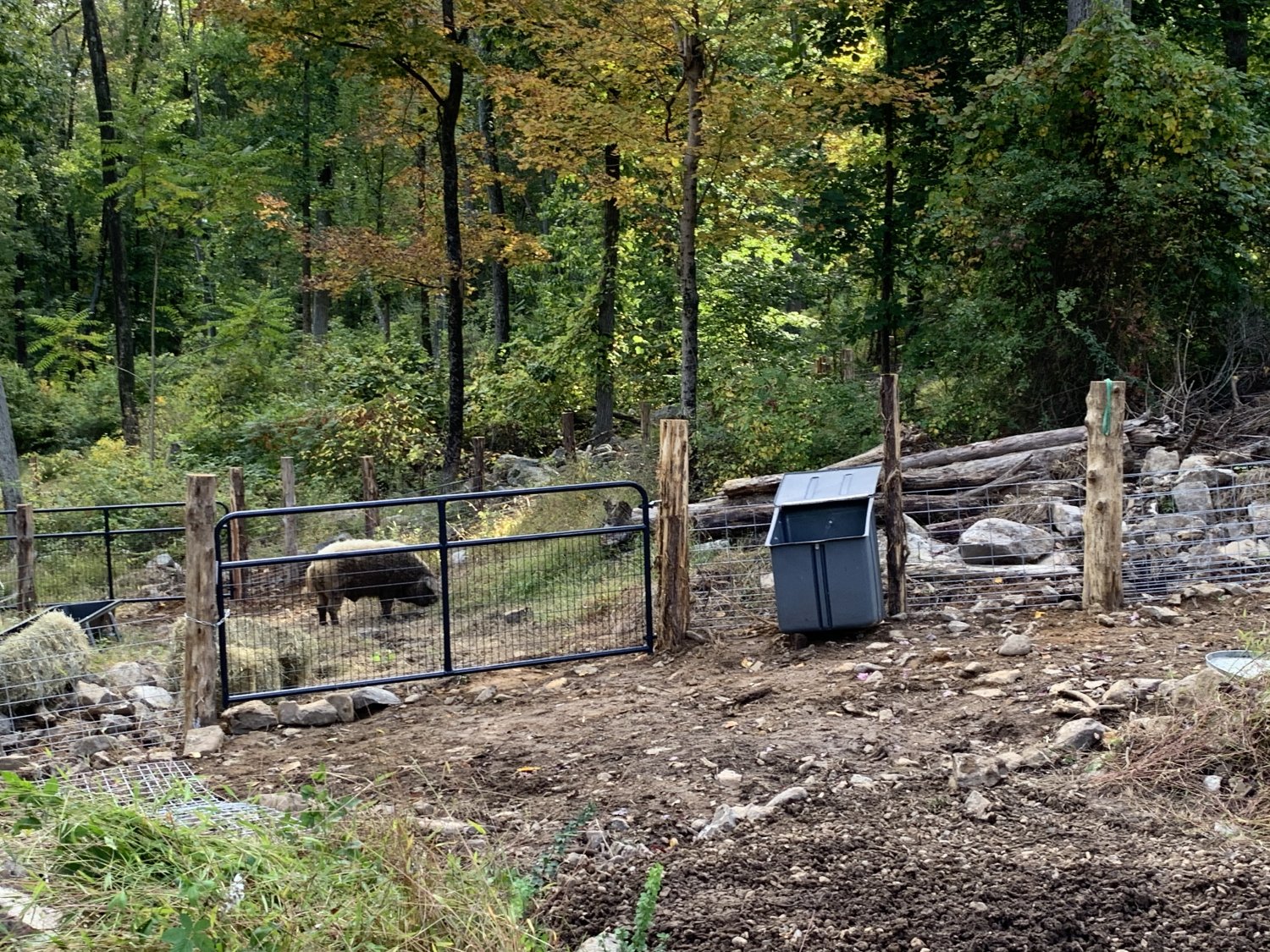 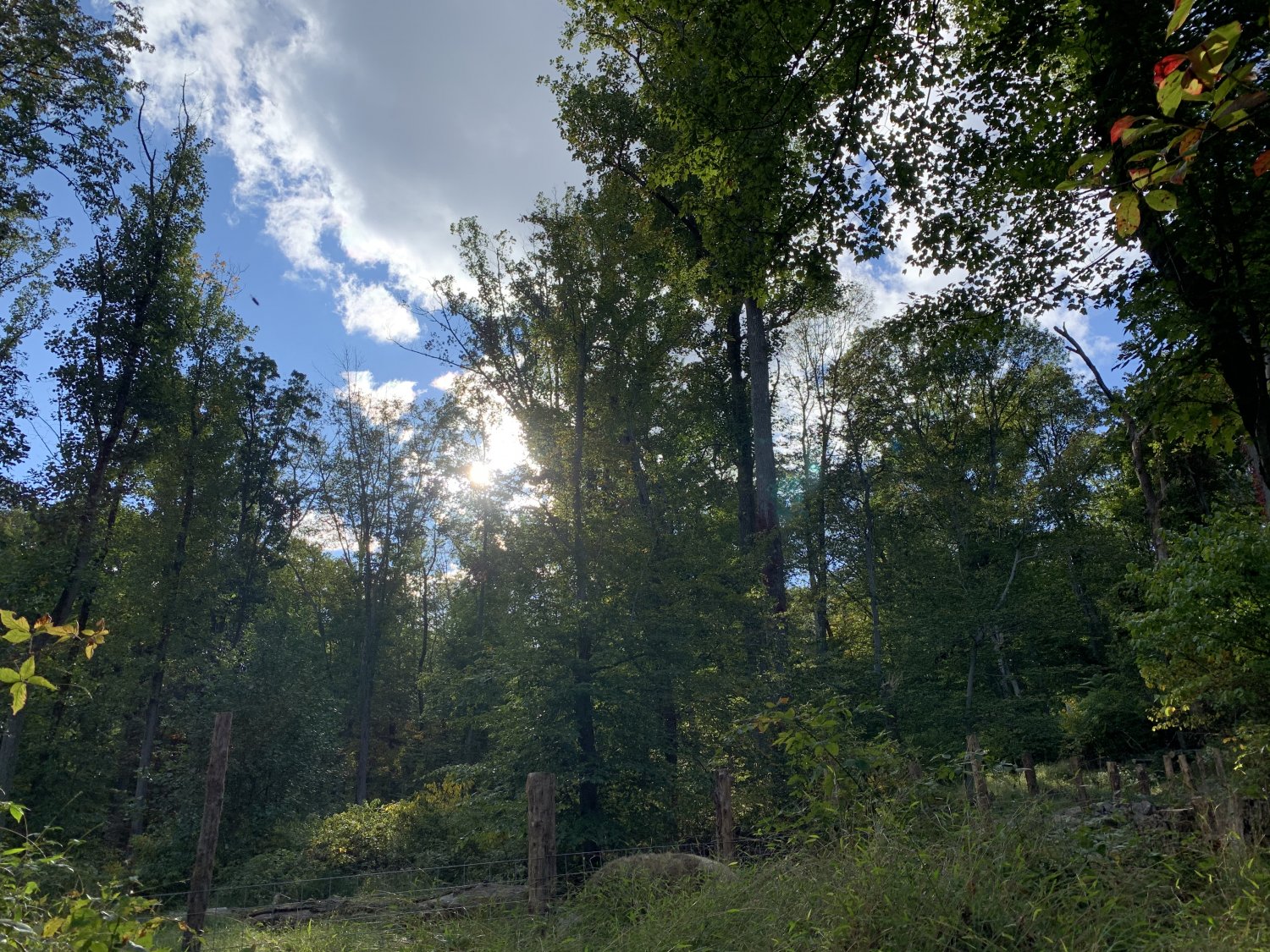 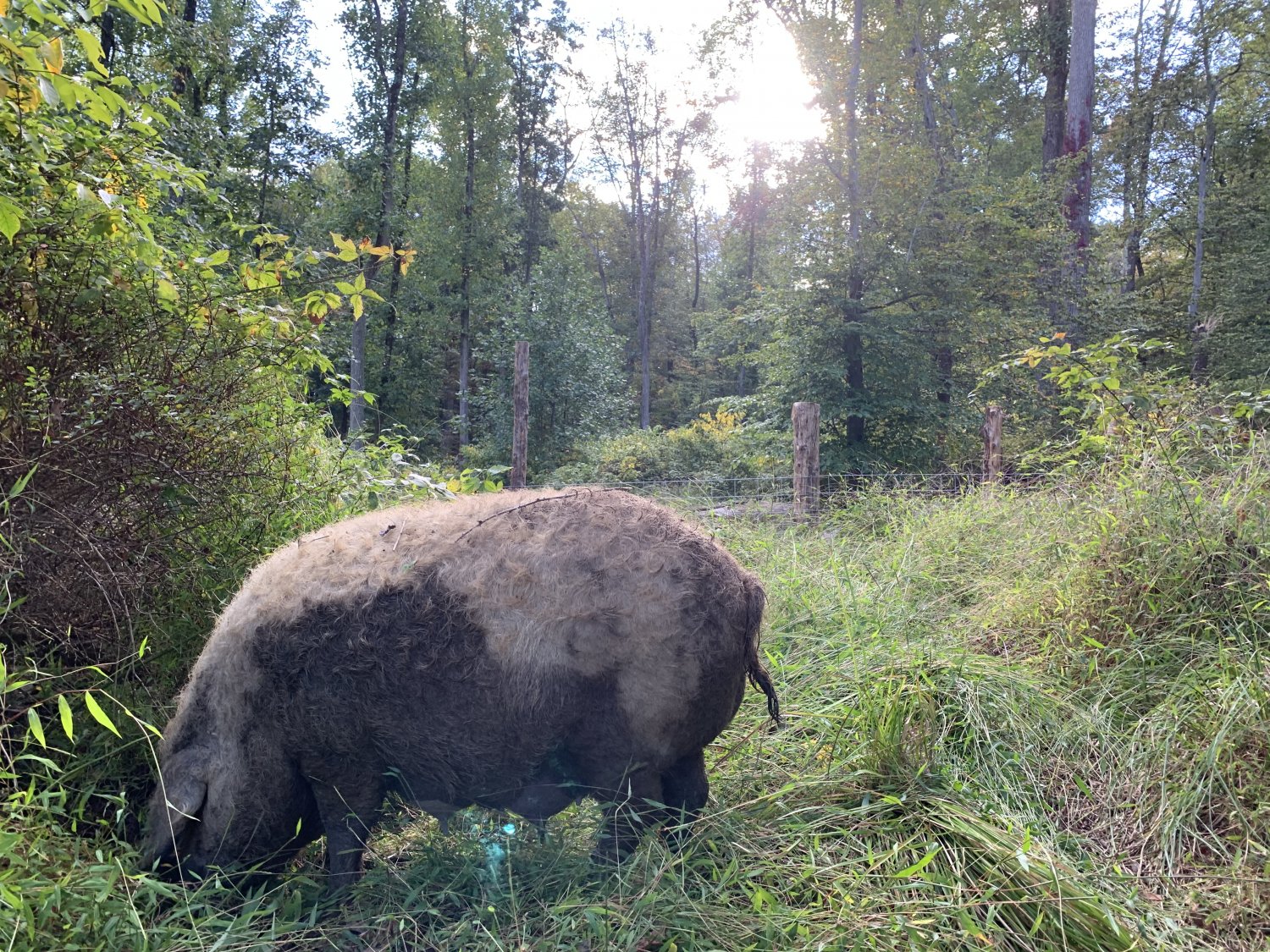 You have come through a trial by fire. Abuse of you and your animals in your weakened state, it is insidious and creeps up on you little by little. Hindsight is 20-20 vision. Now you can “see” and you will recognize the signs should you ever get in a situation with such a person again. You have learned. Now it is time to move forward.

You could never heal your heart in such turmoil and darkness. The new farm is a lovely place and radiates goodness and happiness. I look forward to your postings of the changes in your life.
M