Baymule said:
What about wethers for their wool and halter break them? Do you want to breed, keep a ram and ewes of are you mainly interested in the wool? Wethers can become pets and don't have hormones to make them crazy.
Click to expand...

I love my whethers, but the lambs will help pay for themselves. Plus, I’d like to try milking the ewe and could use some practice with babies. But I might end up with a whether at this rate lol.
M

misfitmorgan said:
You could also look into a small breed like miniature babydoll sheep.
Click to expand...

Those things are so freakin’ cute! If I find them I will get them. But we don’t have any around here as far as I’ve heard. And my capital is a bit small to start so not a likely possibility to get any from elsewhere. But just maybe someone will have little sheep!

messybun said:
I love my whethers, but the lambs will help pay for themselves. Plus, I’d like to try milking the ewe and could use some practice with babies. But I might end up with a whether at this rate lol.
Click to expand...

You would be farther ahead to get a milk goat and a wether sheep. Sheep dont give much milk and are hard to milk and train to milk. Plus lanolin.... Someone on here has dairy sheep but I dont recall who.

A dairy goats gives 3-6quarts a day for 10+ months. A sheep bred specifically as a dairy sheep can give up to 2 quarts a day, however just a wool or meat breed sheep is more likely to give around 2 cups a day for a really good milker and only milk for 5-6 months, a not so good producer is going to give a cup a day for about 3 months. Meaning the lamb the sheep had to go into milk is drinking pretty much all the milk for the first 2-2.5 months until you wean the lamb.

Our Toggenburg doe never stops producing milk. We have not milked her in probly a year and she had been in milk 24/7 for probly 2yrs. Even our Boer doe never dried off completely and we never milked her. Keep in mind though our toggenburg is a diary breed of goat and came from heavy milking lines.

messybun said:
Those things are so freakin’ cute! If I find them I will get them. But we don’t have any around here as far as I’ve heard. And my capital is a bit small to start so not a likely possibility to get any from elsewhere. But just maybe someone will have little sheep!

Also dairy sheep are not cheap. A dairy lamb is $200-800 and would still need to be raised for another 4-6 months before being bred, then be prego for another 5 months before having a lamb and then you have to wait at least 72hrs to milk after the lamb is born. So your $200-800 investment still means at least 9 months of feeding before you get milk and 11 months before you could sell a lamb. It would be all the same for a goat kid but you could skip that and buy a adult goat in milk for around $100-150 at least where I live you can. Do whats right for you, it's your farm.
Last edited: Nov 5, 2020

Did someone say tiny bundles of smiling wool?? 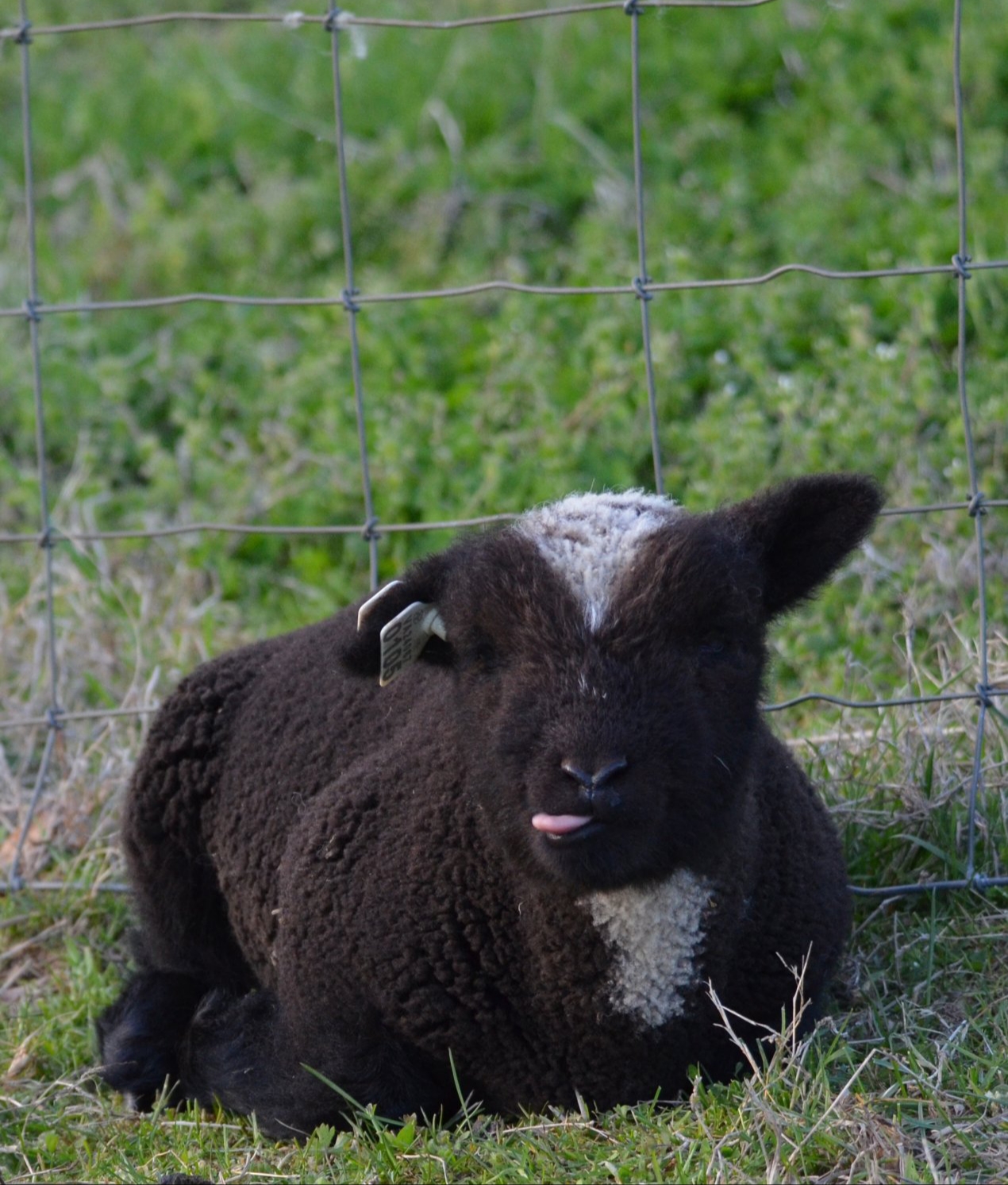 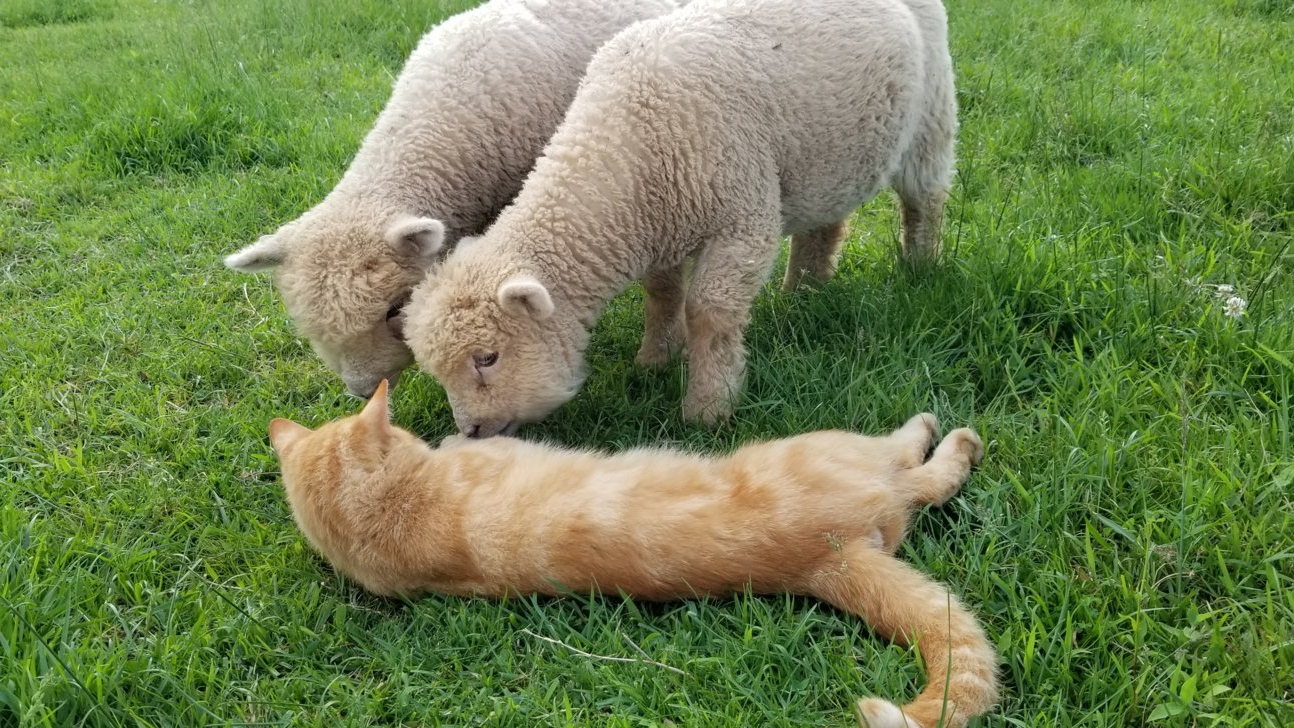 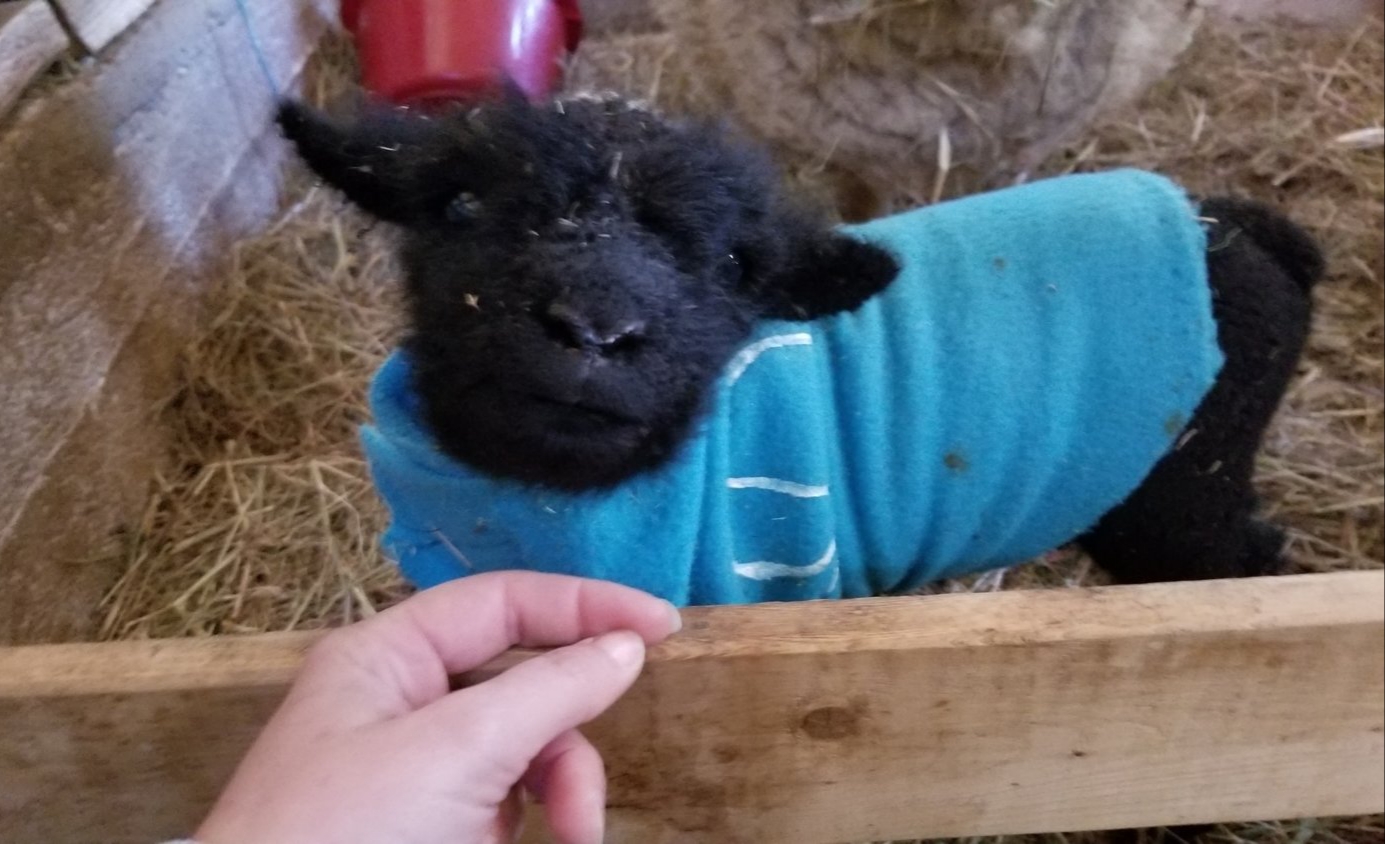 They're very common all up n down the east coast.

They're very common all up n down the east coast.
Click to expand...

If there was a market up here, bet your bottom I would have mini babydolls. They are so stinking cute, I esp love their little beards as babies.
M

What the heck y’all? Tonight’s feeding started with a chicken jumping in my arms so I could carry her to the coop, she hopped down as soon as we got there. Then I have migrating birds...flying the wrong direction! The geese were actually nice to me, which doesn’t happen. The geese don’t bite, but they don’t like me either so that was really weird. Then, I ended up giving two buckets of food, as opposed to 3/4 of one. And they almost polished that food off too. My rabbit, who NEVER misbehaves, has been flipping her food dish too. This rabbit is four years old and has never purposely done that before.
last night I moved my single baby and mom to the big coop. They aren’t happy but whatever. Tonight I tried to move my other mom and five young, they literally just walked through the wire and back to the brooder box. Apparently they can just waltz their way out!
M

Oh yay, my goats started working together to break the chicken coop. How do you secure your chicken coop wire, bottom to a goat’s standards? I’ll try to get pictures tomorrow to see if y’all have any ideas.
M 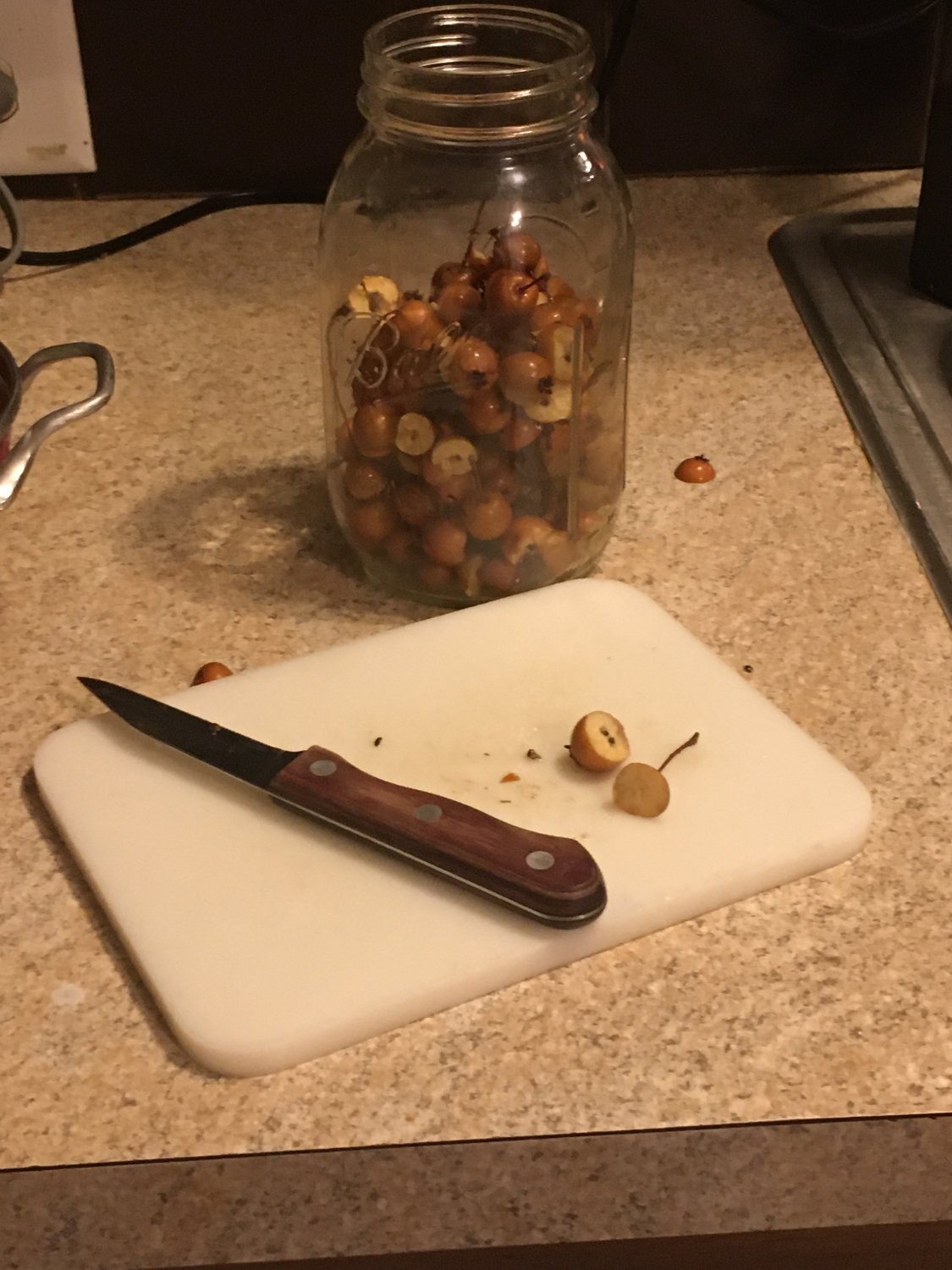 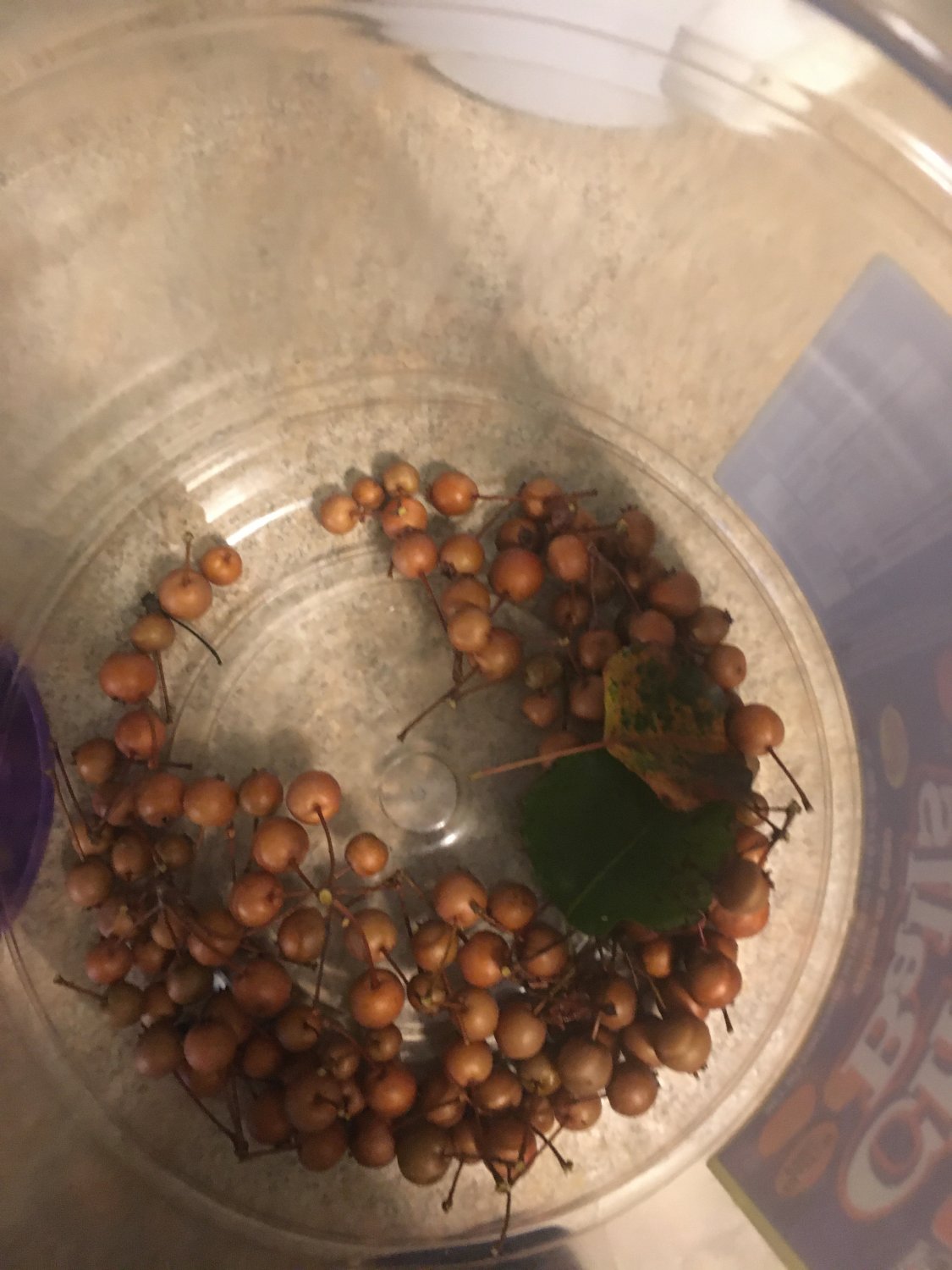 Well, a huge apple harvest lol. I’ve been meaning to get them for a while, but they kept not being ripe. It’s not like you can tell though, they are soo sour. But, for the tree’s first batch not too bad of a yield. Hopefully they will be better next year. My pears are on their third harvest, and the tree got fire blight earlier this year and took out my whole harvest, save one. I was trying to figure out what to do with the tree and my goats escaped the fence, ate most of the tree and now I’m not having blight problems. Seriously not what I was expecting, but don’t argue with succes? P.s. the pics are of acv I’m the making.

Hey, your apple harvest is about like mine this year.
From 7 trees we picked half of a 5 gallon bucket. They were all horse quality, which means I don't feed my horses beautiful apples, haha. There would have been more but the helpful cow moose and her two yearlings knocked a bunch off before they were ripe.

Yours are crabapples aren't they? I think they're supposed to be sour....