Well, got a load of dirt for all the holes yesterday. Then, got a turkey from the store. Of course, there was no room in the freezer, so an impromptu canning session to make room. Who doesn’t like spending most of the night canning? If I’m already canning I’m going to can the cranberries that are finally available. If I’m making cranberries then I might as well make apple butter, some of them are looking a bit bruised. If I’m making apple butter I might as well see what else can be tossed in a can; I mean everything’s already out and ready. I had a friend who came over for my random canning night, which was awesome. But there’s still at least five batches of cranberries left to cook and can among more apple butter! I love seeing all the jars done and laid out.

Ever use red hots cinnamon candy in your applesauce? I've never made it, but a friend gave me some once and it was delicious! What about combining cranberries and apples? That might be interesting.
M

Baymule said:
Ever use red hots cinnamon candy in your applesauce? I've never made it, but a friend gave me some once and it was delicious! What about combining cranberries and apples? That might be interesting.
Click to expand...

I have never thought about putting red hots in applesauce, might have to try it one day. Crapple jam could be good, but I don’t believe there is a recipe for it in the big blue book of canning, and the few recipes I have tried outside of that book have gone horribly wrong. Do you know another trusted recipe book for canned goods?

Cranberries are awesome in oatmeal cookies. I am not a big raisin fan, so I sub cranberries for them.
M

Ahh, thanksgiving is over. I think I’m more looking forward to left overs than I was to the meal

. I had two ducks hatch yesterday. I have one that pipped two days ago, but it’s not looking right. The membrane looks a bit yellowy and just something’s off. I might help that one in a little bit. The two ducks are currently in my brand new mistake of a brooder box. My plastic one broke and I decided it would be cheaper to make one out of wood. But it is a two man carry that barely fits through the door, and I didn’t even remember a floor. Don’t plan a building project late at night and when you have to finish it within 24 hours. Anyway, it is covered in plastic and cardboard to protect my floor and the ducklings seem happy. I’m also trying a mama duck heating pad for the first time. It took longer to heat up than expected, but they seem to be doing alright now. I think they’d rather be snuggled in my hoodie, but sometimes life is hard lol. Thank you @Beekissed for helping invent this wonderful brooding method. It is so much better than having a bright heat lamp in my room. Yes, the ducks are in my room, because the house is being remodeled, rearranged and reorganized; but mostly because I want them close. It’s going to be hard selling them I think, but I have a friend interested so hopefully they’ll take them.

I'd like to take credit for that method but there was one lady that did it before me and I found her vid when the thought about doing it had occurred to me. I was just the first to put the model and idea up on BYC. I had used a heating pad to hatch chicks, so it occurred to me to try to brood them that way also....so when I looked to see if anyone else had tried it, I found her vid. It didn't exactly show how to make the brooder but it wasn't tough to figure and we all put our own spin on it from there.
M

One quack attack had an unabsorbed yolk, it was my first time with that and eeek. But after the first day the little bit had bounced back and now runs around with everybody else. I don’t think it’s genetic, but should I be worried about hatching her future eggs just in case?

I have no experience with that, but I'd take the chance and set more eggs from her.
M

Today’s the day Amazing Neighbor wants three of the ducklings. I also need to get Amazing Neighbor’s silkie eggs to put in the incubator. I don’t know if it’s irresponsible to hatch for Christmas or not. Hopefully it won’t be. I finally got the duck house done, it took way longer than it should have, and it’s not purdy, but at least it’s done. Everything kept coming before it because they had temporary. I’m still waiting for the heat lamp to come in though, and I might need to add a front to it. But it is blocked from the wind on most sides so we’ll see. 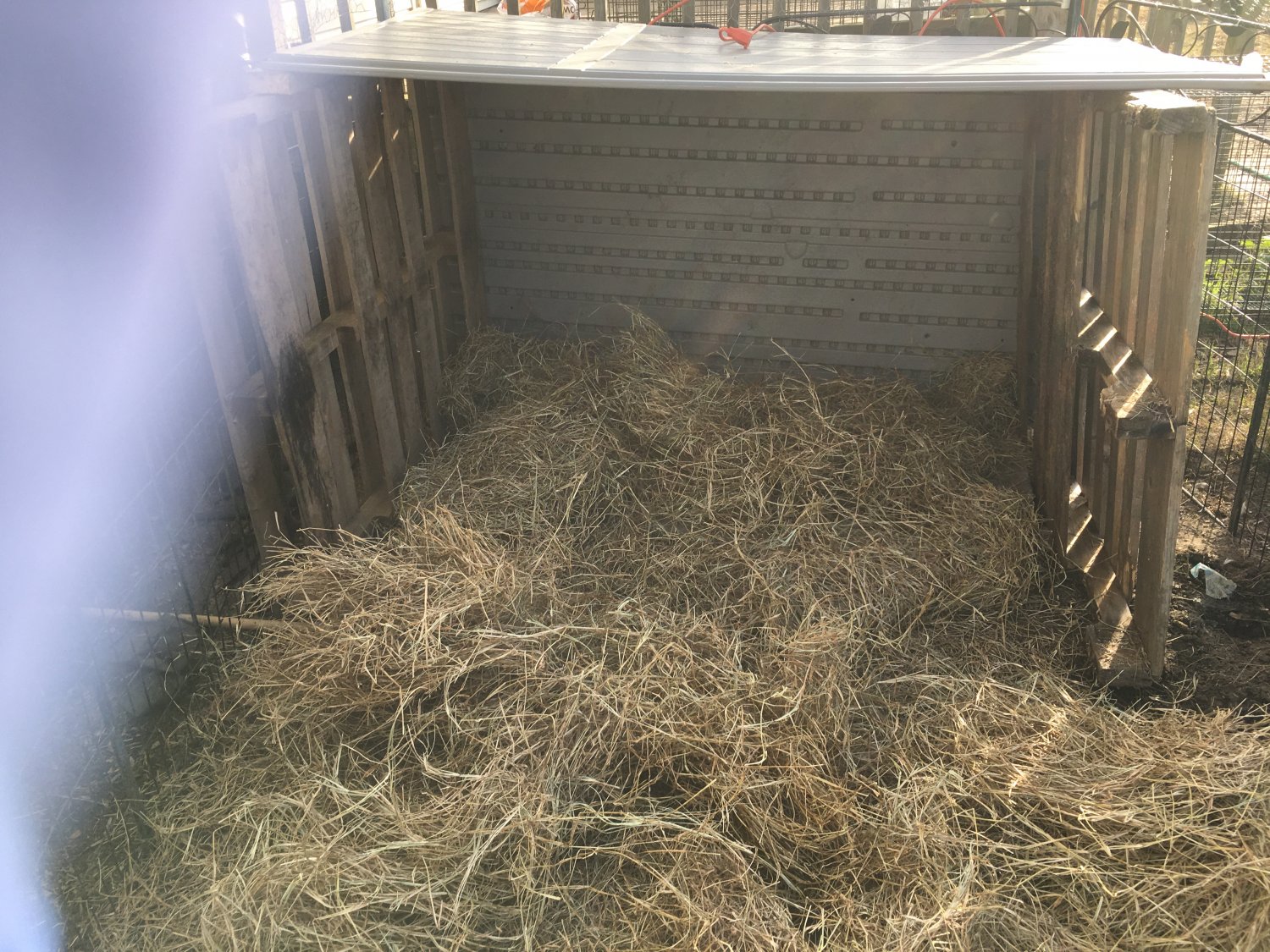 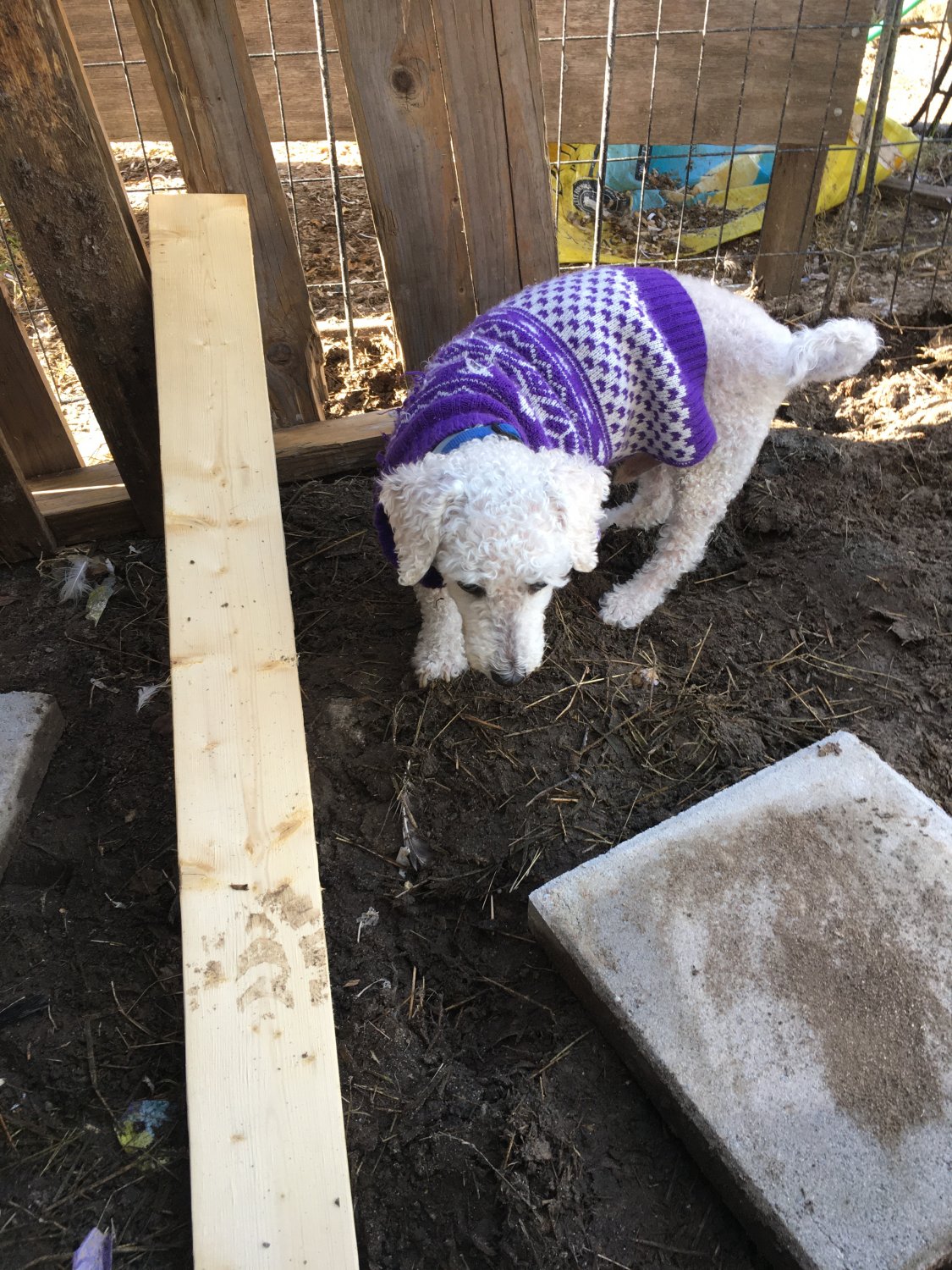 ) come and help. Have I told you about this dog before? He was for free on Craigslist and we had to know what a bichypoo was. It’s a bichon poodle mix in case you were wondering, which is great for allergies. 6 years old, lived with children for a few of those and super sweet. Until we got him home, he wasn’t potty trained and would get into the trash (aka elevated food dish) right in front of you and had no clue why he got in trouble for it. The worst part is this dog doesn’t respond to punishment. A quick swat is ignored, yelling is followed by a two second remorse and ignoring, giving the good dog attention is followed by whining...at least it gets to him. The squirt bottle is the best tool, but it takes about fifty times for it to get through and it’s not like he remembers for long. Anyway, after several years he is know an almost decent behaved dog. He’s lucky I love him some days

I know that blank stare......... a rolled up newspaper is still the best punishment. That and a deep gutteral AAAHHNNNTTTTT! (strikes fear in children and dogs)

My first duck shelter was a pallet with plastic feed bags stapled to it, set on 4 milk crates. They loved it and piled up under it to sleep.
You must log in or register to reply here.
Share:
Reddit Pinterest Tumblr WhatsApp Email Share Link