And so it starts.

Our first lamb was born to our FF ewe 308 on 01/13 between 8pm-midnight. 308 had a large single ram lamb who appears to be in good health, she is feeding him well and taking care of him well. 308 was a triplet so we will be hoping for multiples from her next season. (yes i will get you pics)
FF - single ram lamb (2018)

308's full sister 310 is we believe also bred and should be lambing in the next month. 310 is also of course a triplet and FF.

I will get pics and update on the other ewe's when i get time..hopefully tomorrow.

misfitmorgan said:
(yes i will get you pics)
Click to expand...

Congrats on the successful ram lamb.

I love lamb pictures! haha You are a Lammy Grammy!

Ok we are now not sure if 310 or 308 is the mother of the ram lamb. I saw a bag on 308 and the ram lamb hanging out by her for several hours and then yesterday DH said he saw the ram lamb nursing on 310 he thought. I was going to go out and check better but it was sowing like mad, i will have to go check today. We ended up getting a foot of snow, the drive into work was a bit insane.

I did get this pic from the back deck though when the snow stopped for a minute. Of course there is no lamb in it 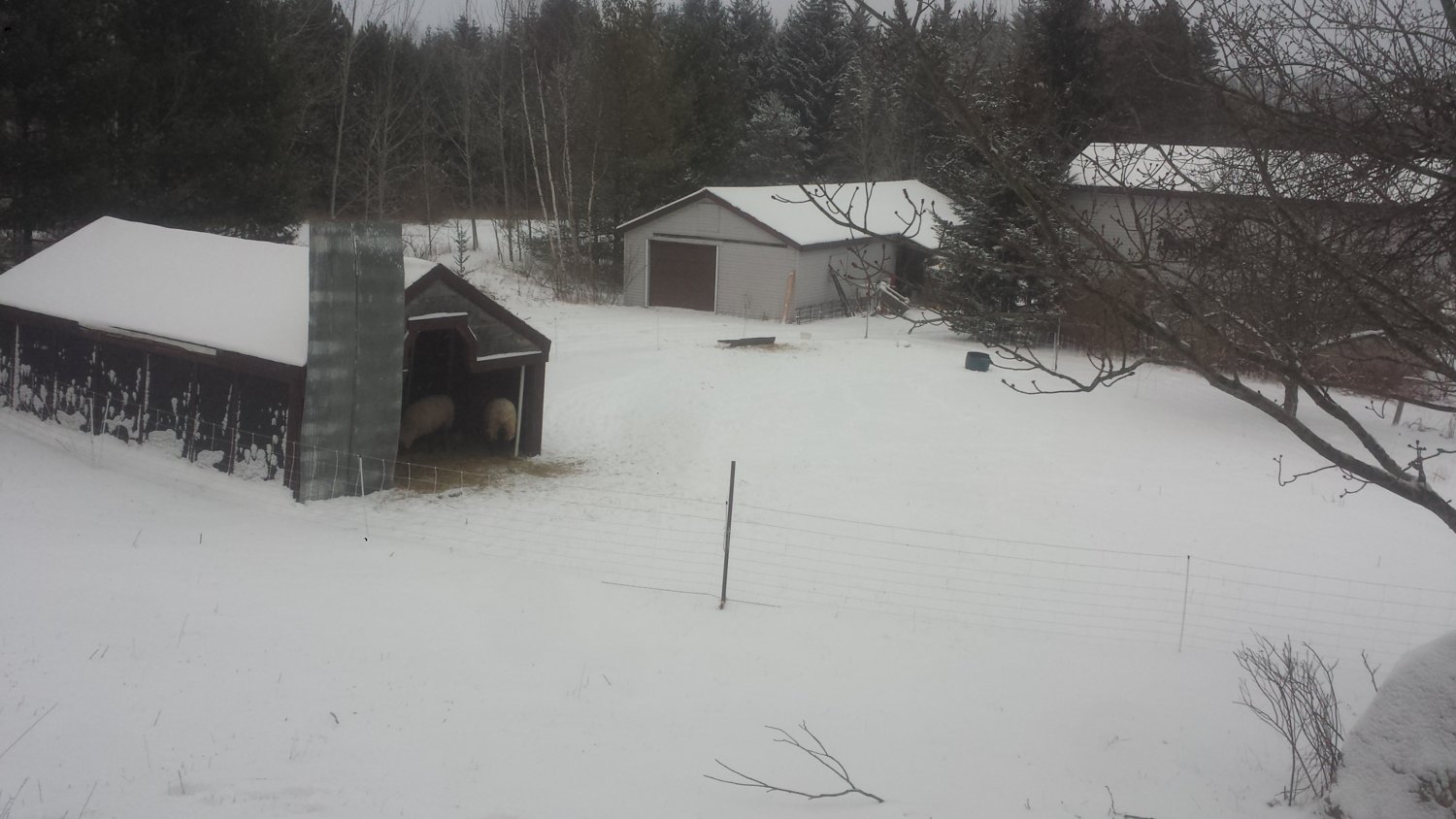 That is the sheep/goat/llama/goose shed. The building with the slider door is the shop, its actually much bigger then it looks in this pic and the building on the far right is the 2 story barn. You can see DH and our friend Carl went around the temp fence and pulled it up off the ground out of the snow with t-posts.

misfitmorgan said:
Ok we are now not sure if 310 or 308 is the mother of the ram lamb
Click to expand...

Um, isn't one of them still fat and the other not??

Ooh look at all the nice buildings!!

I've never seen a 2 dimensional silo before. How much grain can you store in that??

With sheep covered in wool, looking fat or not isnt exactly an easy thing to look at them and see. I will have to go in the pen today and feel them to see who is still prego feeling and who is not. DH said maybe they are both letting him nurse which would be bad because whoever hasnt had their lamb yet would have no colostrum for it. I will get it sorted today. I know for sure the polypay is bred and not lambed as of yet and sweetie as well. The others are not sure sure's yet, i was not even positive the young girls were bred until the lamb appeared. We dont britch our sheep for lambing because it stays so cold here so udders are harder to see, we typically just feel for them instead.

They are nice buildings really. We found out the previous owner was a mason which explains the first story of the two story being cinder blocks and the odd basement additions. He also had a sawmill for a short while which explains the second store of the 2 story building being all rough sawn lumber....including the outside steps which rotted.

Are you perhaps making fun of our tin? It was something like -10 with 25mph winds the day DH and i put that up..we were just glad we got it up to close off part of the doorway before we nearly froze to death. It is temporary. Surprisingly that little wood shed they are in(carport someone covered with wood and put a real roof over) is very wind tight and low enough it stays warmer inside then outside with the herd in there. Now if they would stop eatting their bedding it would help.

We are debating making some jugs, i want to but i dont want to stress out the expecting moms and at this point if we did that the only sheep left in the pasture would be the rams.

Honestly I thought it was a couple of panels of a silo that had been taken down. I'm surprised the wind hasn't flattened it over above the roof line. Would love to see more pictures of that 2 story barn inside and out.

What a great find on this house. Barns already in place, a shop, count your blessings!