Always glad to hear that damage was not as severe as it could have been and that all are safe. Power out is a pain, no doubt. Hope they have a way to keep any freezers powered up enough to keep frozen, and water to the animals (yeah, in the midst of a hurricane, and we have to worry about water....drinkable water.... for our critters.) It is supposed to be fairly fast moving, so should leave their area quickly....headed up and then a fairly hard turn east.... Think that @Mike CHS may be in line for some of it???? We are supposed to get rain, some wind and a potential for tornados....

Hi guys! Thanks so much for Baymule for updating you guys while we weathered the storm and suffered power outages. We finally got power back about 30 mins ago. I cannot tell you how wonderful it was to have your prayers for us and our BYH. We were very lucky that Laura was as far East as she was. We missed the brunt of the storm. All animals did amazing! Our rain barrel system worked perfectly so the animals never ran out of water! I will post pics of how we penned the little chicks up because it was very cool and they did great! Below are the pics of it and they are not that bad!

It could have been so much worse. We cannot tell you how grateful we are to have come through this with such good results. We pray for those who had it worse than us! Thank God for power being back on though! Texas heat is awful!!

We did freeze 2 cases of bottled water so our freezers stayed frozen while the power was out! JM (son) came up with the idea to freeze them and line the freezers with them to maintain the cold. It was great!!

Watching the flattened neighborhoods, destroyed businesses on the news in Lake Charles this morning........ I praise God that you and family came through unscathed. Lake Charles isn't too far from you and took a direct hit. I am glad that you and yours are ok. The heat after a hurricane is oppressive and I swear the mosquitoes are as big as mockingbirds. Glad power is back on for you.

Amen. So many lives upended and changed forever. If you have never experienced a storm or the devastating effects of it, before and after, it is quite terrible. We have been asked so many times why we don't move. I have thought about it. The Gulf Coast is quite lovely, although our water is usually brown on our beach, the community is amazing. Weather is everywhere and none of us want to do snow or tornadoes. I am much more nervous about Earthquakes than Hurricanes and cannot even fathom going West of Texas. If I were to ever cross the Ocean, I would not come back! So I stay here in Texas and visit all the States I can! I haven't found anywhere I'd rather live yet so we have set down roots here! And, we love it!

That’s how we feel about east Texas. I love the trees and green. Daughter and family moved to Odessa, we aren’t going!

Sure am happy to read you are all ok...hope that porta potty wasn't full

They had just placed it! Thank heavens!
@Baymule can't do any place West of Houston or North of Dallas......unless I go to OK. (TO VISIT, ONLY) We did 2 years in Midland and it was simply the worst place I have ever lived. I would never do it again!

Enjoying the farm and the fact that we did not flood!

Pearl, enjoying the random chicken feed that she and her buddies are finding, while drinking out of the chicken feeder and not the 5 gallon bucket of fresh water we placed for them (Alpaca).....

Silly girls.....squeeze your lips into that feeder and ignore the full bucket....yeah, that makes sense....

23 "baby" guineas (9 weeks old) inside the pen, day 2 of them being out of their coop but still penned in, one grown male or female guinea that just showed up at the farm 6 months ago....out of the blue, so we guess this is now home......we pen the adult guinea at night with the adult chickens in the big pen, we lock the baby guineas in one coop and we have 120 baby chicks in the other coop with an auto door that we removed the battery from until they are bigger. 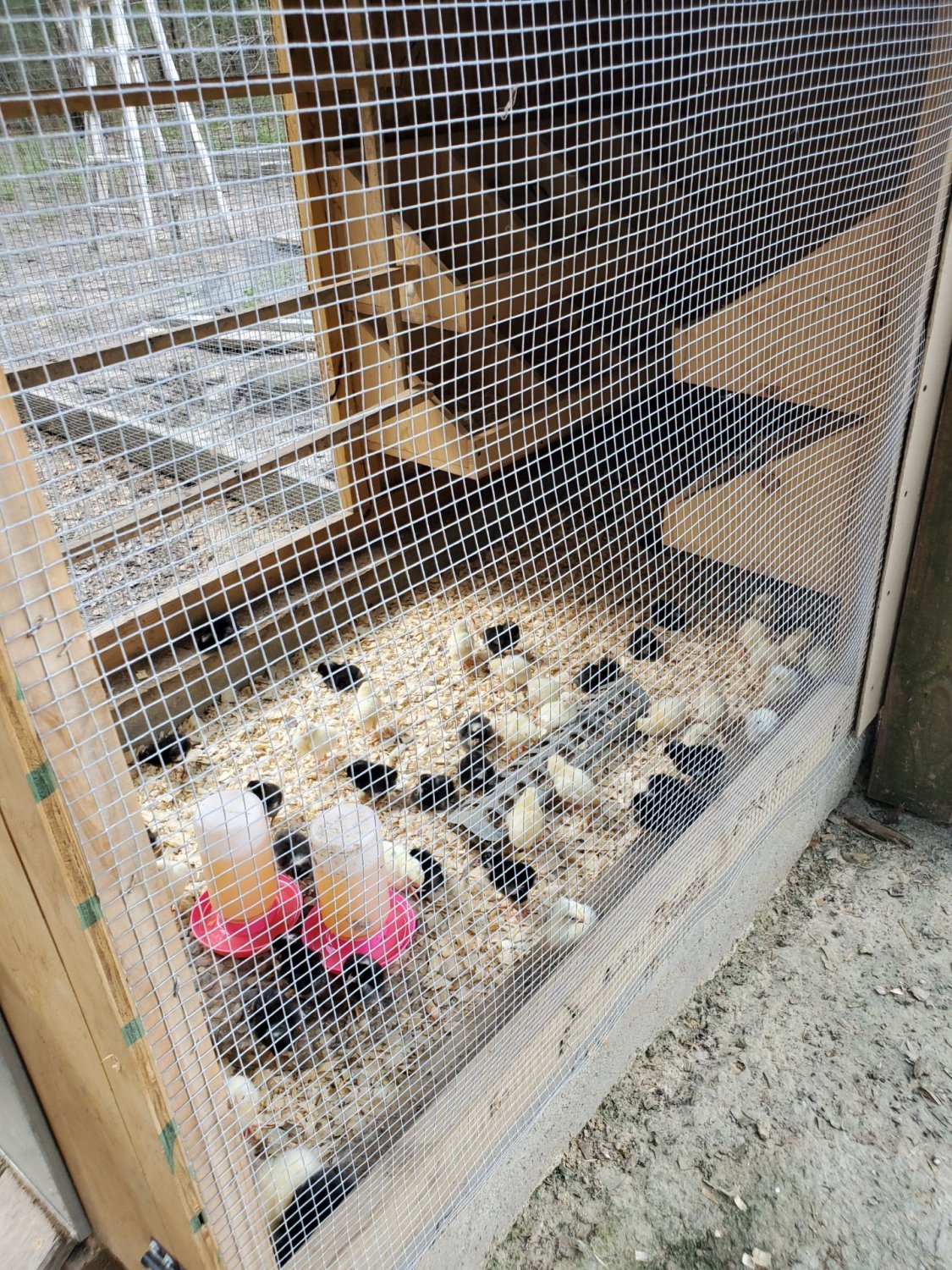 And Captain Spiderman joined us in bed at 3am because he was afraid of a bear in the house.....there was no bear that we could find and HOW does someone so small take up so much bed space?!?!?!?!

Much of the clean up has been done in the Alpaca pen and we started by the chicken coop today, well, we thought about starting.....mostly we just sat in the camp chairs and watched the animals and chatted about how much work we weren't getting done. Then we went to lunch.
Then DH got a swarm call so we went home, loaded up bee boxes, he went to get them and I went to do laundry! Well, tomorrow is a new day!

Sounds like a lovely day to me. I loved for my kids to come crawl in bed with us when they were small. Those years are gone all too quickly. Our youngest grand daughter insists on sleeping between us, enjoying it for as long as it lasts!
You must log in or register to reply here.
Share:
Reddit Pinterest Tumblr WhatsApp Email Link