Hello everyone.
I'm hoping those of you with experience might be willing to offer opinions on a pig I acquired a few days ago.
I have a 5yr/old Juliana that has been kept with my tiny herd of goats all her life. We have recently decided to "get out of the goat business" and rehome our last remaining goats but I was not willing to do so until we found a permanent friend for Piggy. I had been researching mini pig rescue groups, but as there are none in my immediate area (and none of the others around the state could offer local contacts) I resorted to just keeping an eye out for someone looking to rehome.
I answered a "free pig" ad. Owner seemed kind and genuine, and I honestly believe the state of this pig was just a result of lack of knowledge.
I was told the pig was a 2-3yr old mini female. (Gender being one of my only requirements as I do not wish to make more pigs.) It had been kept alone in a 15x15 pen all of its life. When we arrived to see the pig, the owners had already secured it in a large dog kennel, the bottom of which had cracked and broken under the weight and its leg had been injured.
Having only had a female pig myself, and this pig being quite overweight and seen only from above in a dog kennel, I did not question them as to gender. Honestly, he was breaking my heart between the obesity, overgrown hooves, and what I suspect is mange or lice... I probably would have still taken him (at least temporarily) even if I'd realized at the time. Got him home and he's clearly a boar, a real sweetheart though, which makes this even worse.
The injury was to his left rear leg. No open wound, and I cannot find a clear break, but its hard to tell with all the fat. He will pull it away when I feel it while he's laying down. I was hoping this is something that would improve on its own, but I have serious concerns about his weight complicating that. I brought him home on Saturday and as of Wednesday he will get up and move about, but less now than several days past. He may have just been more active inspite of pain for the first few days being in a new place with much more room than he's ever known and a female close by to boot. He attempts to hold up the leg in general (or at least take weight off of it), but will put some pressure on it.
As to suspected parasites, I gave him an ivermectin injection upon arrival and isolated him. In spite of his injury, however, he broke out and attempted to breed my Juliana. I separated them and resecured him, and gave my pig an oral dose of ivermectin.
Any thoughts are most welcome. 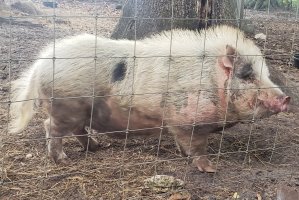 He has probably been over fed and will need to go on a diet. I have no experience with tiny pigs, but I would hazard a guess that he should receive about the same amount that you give your female. If you have an area where he could graze, I'm sure he would appreciate the green grass and the exercise would be good for him. If not, fresh leafy greens, or vegetable trimmings from the kitchen would be good for him. I'd take him to the vet and get him castrated and have that leg looked at. Any idea how old he is?
G

I was told he is 2-3yrs old. I started him on the same feed amounts as my pig as soon as he arrived.
Our property is entirely wooded, so no pasture, but we do rotational browse. My concern was keeping him isolated to one specific pen until I could get another ivermectin dose in him in 2 weeks. Unfortunately, that pen is bare. Is more movement helpful or harmful to the injury?
No farm vet around here. My vet will see pigs if brought to them, but they are quite expensive. I will take him to be castrated if I can get him healthy, but I'm hesitant to spend that kind of money on him at this point. (I know that sounds terrible, but DH and I have agreed to put him down if I can't treat at home) Is this leg injury something that only a vet can assess or is there anything I can do? Is wait and see unreasonable in this scenario?
M

Even a soft tissue wound is painful, so limping or non use would be seen. Since a decision on cost has been made, it seems only a wait and see will work for the leg issue. I understand not wanting to spend for castrate if leg is more than soft tissue damage. However, he WILL keep going after your female until fixed and will need separation after that for at least a month.

I'd say after 2 weeks you will see improvement if not a break. Then consider options.

let us know how he does.

Wait and see is perfectly reasonable. Many of pretty much do our own vet medical for our animals. If it’s a sprain, it will get better. If it’s broken, he sure wouldn’t be putting weight on it.
G

Are there any non-prescription pain relivers or anti-inflammatories that would be helpful in this case?

I don’t think OTC human meds would be good for him. I take turmeric for inflammation and you could give him that. It’s in the ginger family, bright orange-brown. I but it at the health food store in 1 pound bags, but you can find it in capsules. Sprinkle a teaspoon over his food.
G

I'll try that, thanks.
Yeah, I haven't found in research any reliable accounts of human OTCs for this, I was thinking more of farm store selection. I've seen livestock aspirin, but the one's I've seen aren't labeled for swine. Just wondering if there is something available in that realm that I might not know about.

I did find this:

How often can you give a pig aspirin?

Buffered aspirin - 5 mg per pound of body weight twice a day. Must be buffered and given with food. Do not give if your pig is not eating and do not give for more than 3 days without seeing your vet.

However - pain is the best signal for an animal not to use the affected limb and cause more damage. If he's still moving around, and trying to breed your female it is probably ok to just watch him for a few days. You're the one who sees him so use your best judgment for sure!
M