My hogs made the news

Truth be told I have been completely overrun with pigs these past few months. But there was one pig that really got to me. She was born in August to one of my sweet sows Maeja. However throughout her whole time on the property she did nothing but cause trouble. She was the instigator for every escape the pigs managed. While the young piglets often play outside the fence within a reasonable distance, she would lead them on all kinds of adventures. To the front of the property, the neighbors compost or the development behind the farm nowhere was off limits. I even had calls about her leading an older group of hogs into the road, however they were back in the yard by the time I arrived. And trust me I know how dangerous that is, but no matter how many times I repaired the fence and blocked their escapes she found a new way out. I had planned to take her to the auction a few months ago but the brat escaped during loadup and I did not have time to go catch her. So she caused even more drama until one morning I wrestled her into the barn to keep her locked up until I could sell her. And she was easily 70-100# and so I was hurting for days. However she even managed to escape a locked stall and escape the barn even though all the doors were closed. She dug her way out of the stall but I honest to god have no idea how she got back outside the barn. A few mornings later, I got her back in the barn, fixed her escape route and awaited her trial. The morning of Feb 18 we loaded her up without any issues and she went off to the auction along some other newly weaned piglets. Finally the brat was out of my hair. That is until the next morning I get a call that theres an article about a group of pigs that escaped the auction and went to the police station. I’m not the only one who sells hogs and the first article used a stock image and called them potbellies(the audacity!) but when I found the second article with the photo...there is no mistaking these guys as my own 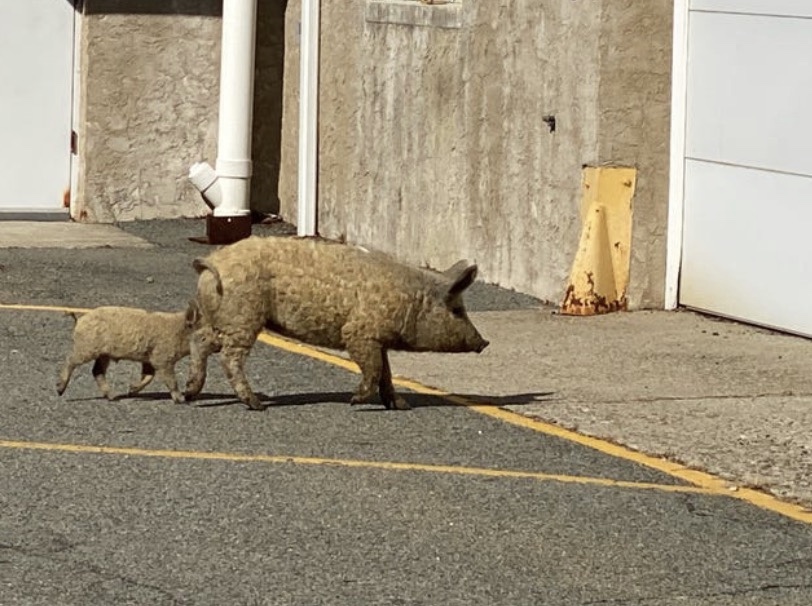 Leading the patrol is the one and only brat pig. They say one was still on the loose and whether that one is her or not is yet to be seen. But at this point the hogs had been sold and are no longer my problem so while in the past I would be stressing out, now I can just sit back and laugh.

Three were caught, but one fugitive was last seen by police in their lot just before noon on Wednesday, Sgt. Darren Tynan said.
www.google.com

Yep - not your problem anymore! ​
I'd say you made a great decision on selling that one!

Okay that's a naughty pig lol. Ours would break out only to stay in the pasture and eat the grass and would come running when called i can't imagine having one like that lol. My first pair were durocs thats the ones i am referring to.

Whew! You dodged a bullet on that one! Goodbye brat! Good riddance! Isn’t it wonderful that she is someone else’s problem and you can have a laugh.