Last night I was looking at Pyrenees rescues online.
DH asked why.
Me- I told him that we would have to have another dog, especially when we got sheep and had to keep the ram separate from the ewes.
DH- Why?
Me- Because you put the ram in when you want the ewes bred or else you never know when they are expecting lambs.
DH- Oh. Why do you need another dog?
Me-Because coyotes woke me up twice howling close to the house. If you have the ram by himself, the coyotes will get him. So we need another dog. And we have to have a wether so he can have a friend.
DH-grumble
Me-And it has to be a male, because Paris doesn't get along with other females.

This afternoon a man walked into DH's work with an 11 week old Pyr male puppy. DH bought him, told the man where we lived and the man brought him to me.

He scratches at the door to go out to pee. Good start. He ate like there was no tomorrow and has drank like a camel.

I was not looking to get a puppy or even a rescue right now, with moving and all the chaos and confusion for the next several weeks, but there he was. So what do you do when opportunity comes along? Now we have to name him. The man was calling him Bear, but I don't want that name. He has light blonde ears that look like the color will fade away. He bounced around Parker, our black Lab/Great Dane cross, and barked at him, wanting to play. He tried to play with Polly, our Aussie, but she snapped at him. She is not impressed. He was not shy or cowed down to either of them.

I took him in the back yard to meet Paris. Her teeth were chomping and she smelled him all over. He didn't know what to think about that. It will take a little time to properly introduce them so that she accepts him. It is her yard, her territory and I have to make sure that she doesn't hurt him until she decides he is ok to be in her space. She likes male dogs, so I think it won't take long.

I tried to get good pictures, but he just wouldn't stay still long enough! 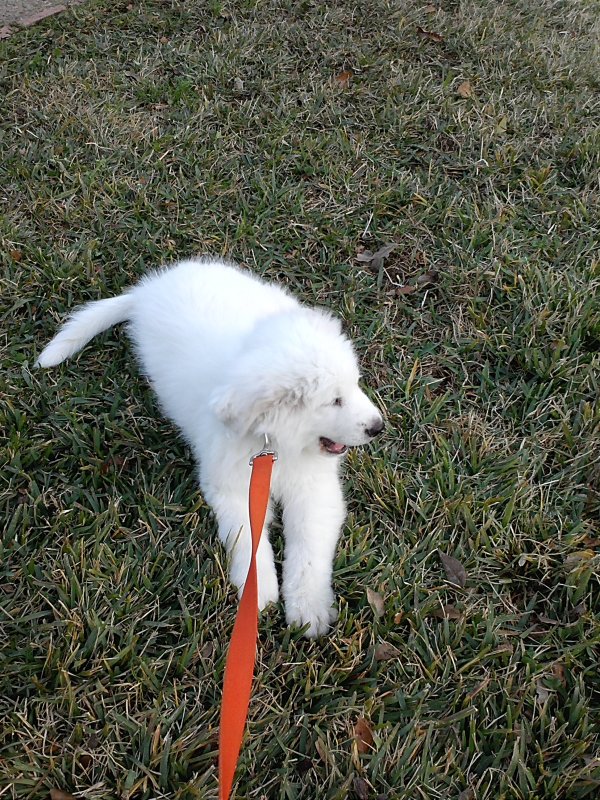 Finally, he sprawled out and took a nap! 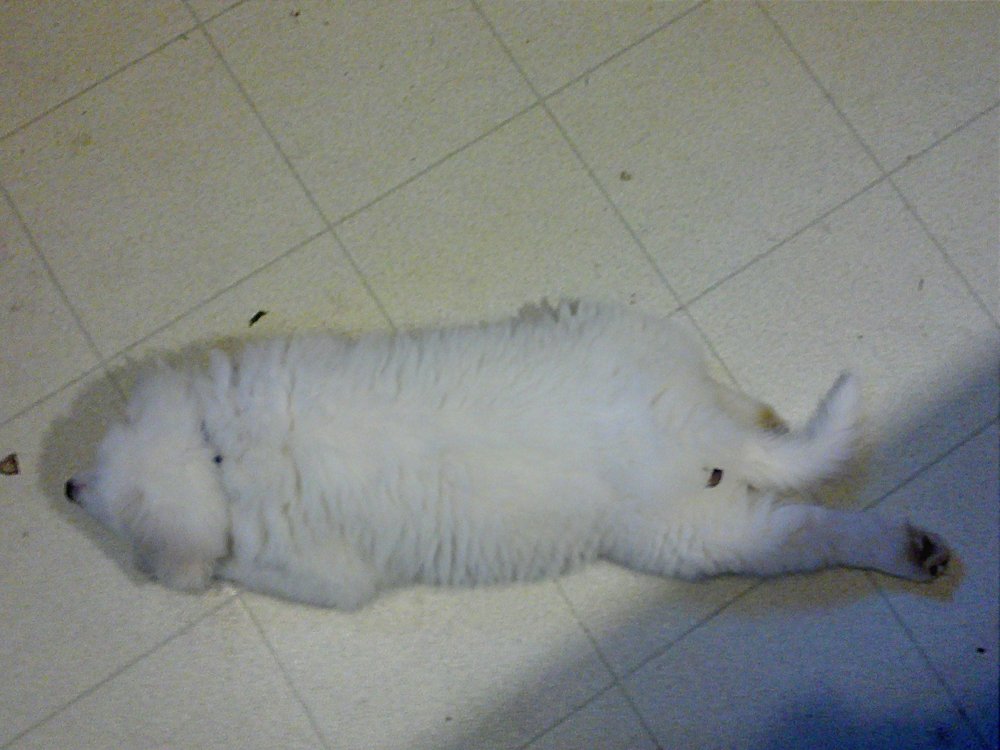 Ahhhhh, can you say CUTE! When God offers an opportunity and a blessing in the form of something that stinkin' cute - what other choice does one have??? Congrats!

A pyr! A baby Pyr! An adorable fluffy loveball!

X2 what frustratedearthmother said!
Sounds like he was meant for you!!!!! So precious. Congratulations!

We have named him Trip. His legs seem to be made out of rubber and he trips all over himself.

Plus, just watching him be himself is a trip, so Trip he is. We made several tries in the backyard with Paris last night, she wasn't too happy about the idea. This morning I took him in the backyard, holding him at first, then let him down on the leash. Paris tried to eat him. What a meelee. I was trying to pick Trip up, Paris was pinning him down, mauling him, and DH swung into action with the "chicken herding stick" and got Paris off of Trip. I snatched the squalling baby up and got swiped across my lip by sharp puppy teeth.

I put Trip in the house and had a talk with Paris, assured her that she was still Queen, but has to be nice to the puppy. DH also petted her and reassured her that he wasn't mad at her. I think he must've got within the "it's MINE" invisible line around her food bowl. There were no teeth marks on Trip, I think she was just scaring the liver out of him and asserting her dominance. And she did. She lets the chickens eat out of her bowl, but a puppy can't get within radar range of it. Go figure. When I try again, I will definitely make sure there is no food bowl in sight.

Trip spent the night in a large kennel in the garage where he whined and "OOOOOOOOOOOOOO" howled mournfully all night. DH let him out at 5 this morning and I got up to a pile and puddle in the front entry way. At least it was close to the front door. Trip wants to be outside, like a good farm dog should be, but he will just have to bear with us for the next few weeks.

I am racking my brains on what to do with him so he is happy, Paris is happy, he is safe and we can sleep. I think I will close off the run to the chickens, pile it deep in leaves and put Trip in the run. There is a small shelter in it so he will have cover. And if Paris can see, hear and smell him, she might warm up to the idea of having him around. Trip will be able to see, hear and smell the chickens so maybe that will help him later on with getting along with the girls. It is a 12'x8' run, so that should give him a good bit of room.

Paris did not draw blood on Trip and she could have very easily. Scary as it was, I really think she was setting limits on what Trip can and cannot do. Moving her to a new place will mean setting new boundaries for all the dogs, so maybe she won't be so possessive for enough days for them all to sort things out.

Anybody have any ideas on getting Paris to accept Trip and not have him for breakfast?

I am not a LGD expert in the slightest. But i do have pitbulls that i rescue, and have trained and housed MANY orphaned and rescued dogs. Paris behavior is 100% her asserting her dominance and establishing she is herd boss and queen. I do not know her, but if she did not do anything to him aside from pin him down and have a stern talk, it'll just take some time for little Trip to know her ground rules. As long as he doesn't get overly dominated, everything should be good. But just as you have intervened as YOU are herd boss, if she is allowed to bully him, he will remember that when he becomes a 100+tank.

I think the dog run sounds fabulous personally. But again, i am not a LGD expert. So happy you have him, and your ram will have a guardian!

I will not allow Paris to be a bully to Trip. She may assert her dominance, but not be down right mean about it. Paris might be the one exiled to the ram pen......

Not an expert at anything dog, and certainly not LGDs, but many years experience with dogs. She will be dominant and queen only until such time as Trip gets mature and full size and then they will finally determine/work out which will be the dominant one and who will be king/queen... IMHO the bottom line is that YOU should be/remain queen/pack leader and they should always respect you as the owner of that position. Sounds to me like you concur