I meant to wean the lambs a month ago, but didn't have their pen ready. So finally, yesterday, at 5 months old, we separated them from their mommies. I felt like a baaaaad sheep mommy for not weaning sooner, but read lots of posts on BYH and found that some wean at 3 months, some at 4 and some at 5 months. So I didn't feel so bad anymore. We built them a small pen in the backyard where Paris can keep an eye on them and I can begin training her to the lambs. It started raining last night and the lambs huddled in the corner, they didn't know they could go in the Hawg Hut. So DH and I took some feed and went out in the rain to put the feed in the Hawg Hut. FEED!!! All of a sudden the Hawg Hut looked awesome and they piled in to eat. They got the idea and took shelter from the rain. It was raining again today and I had to run out and get their picture.

This is their pen. It is small, but they won't stay in there long. See the long grass outside the pen? I haven't let DH cut the grass in the backyard so they could mow it down. Their pen backs up to the pasture the ewes are in now.

Since we were going to pick up our new ram, we needed to rearrange. The horses came out of their 2 1/2 acre pasture behind the house and went up to a small pasture up front. When I say pasture, don't envision a beautiful grassy field. Instead envision a wooded, brushy, briar infested wilderness. I call it pasture because I have to call it something and maybe it is wishful thinking.

We planned on putting the ewes in the horse pasture so they could browse on the brush. The horses had already done an amazing job, but there's plenty to go around and there's lots the horses wouldn't eat. I took Trip on a leash, to walk the fence line in the horse pasture. At the back, we jumped up a tiny spotted fawn. Trip hit the end of the leash and dragged me, in pursuit. We lost it in the thicket. I really didn't want Trip learning how to kill fawns, so I put him back in with the ewes. I got Polly and Parker and DH opened the side gate onto the pipeline. We haven't got that side of the property fenced yet, so we were hoping we could flush the fawn out. Polly and Parker had a grand time, barking and running around. I saw the fawn again, but the dummy dogs didn't. We made another sweep, but didn't see the fawn the 2nd time. We left the side gate open all night. This morning, before we moved the ewes, Polly, Parker and I made another noisy sweep through the woods and didn't see the fawn. YES!!

We left early this morning and went to this lovely ranch and picked up our Dorper ram. He is 8 months old. I snapped a couple of pics of him in the trailer.

We got home, moved the ewes and unloaded the ram. He found the hay and enjoyed himself.
He is in the pasture featured in my I Hate Green Briars thread. We have named him Prince.

I went walking in the former horse pasture with the ewes. They followed me down the trails the horses made, stopping to snatch bites of the abundant browse. This is at the back of our property. See the beautiful ranch behind us? It is over 1,000 acres, high wire fenced and has exotic deer in it. I covet that pasture....

there are two fences because the ranch fence is offset by 3 feet. There is a 2' strip of wire hog ringed to the bottom of the ranch fence, laid on the ground to keep dogs and coyotes from digging in.

This is the side that borders the pipeline, with the ranch in the background.

This is behind the barn. Lots of brush!

I covet your sandy soil!

I bet you do!!! I know what you have and I am glad to have my sandy soil! It pours down rain and we don't have mud!!

Is trip going to transition to the new pasture with the girls?

Yes, he loves it. He was upset when we took "his" lambs away. Now, their pen is up against the pasture he and the ewes are in. This afternoon, the ewes were close to the back yard and Trip was laying between them and the lambs in the back yard, watching over both of them.

I'll start getting serious with Paris in a day or two, it has been raining here. Paris is the one that is location bound. When it is time to reunite the lambs with the ewes, I'll open the gate from back yard to pasture and she can go in the pasture or go back to her back yard. Or she can dig out, climb the gates, do gymnastic back flips over the fence and run off. Who knows what Paris will do??

Trip wasn't sure about the ram. It's like he recognized the ram was "manly" and he was trying to sort out who would be the alpha animal. I took him in with the ram, on a leash and let them sniff each other. Trip tried to jump the ram, but I hauled back on the leash and scolded. It will take time, I think Trip sees the ram as competition. LOL

I remember discourse by Southern about young LGDs at breeding time. Trip ought to be a real trip when your ram joins his future harem later this fall and starts wooing them

Latestarter said:
I remember discourse by Southern about young LGDs at breeding time. Trip ought to be a real trip when your ram joins his future harem later this fall and starts wooing them
Click to expand...

And the ladies know that there is a MAN in the house--they have been baa-baaing at each other since we drove up with him in the trailer yesterday. I took Trip in with Prince again today on a leash and choke chain collar. I will work with Trip and Prince so maybe Trip won't see Prince as an intruder. They smell each other, get up in each other's business and smell each other all over. Trip then licks Prince's ears.

Trip and Prince getting acquainted. 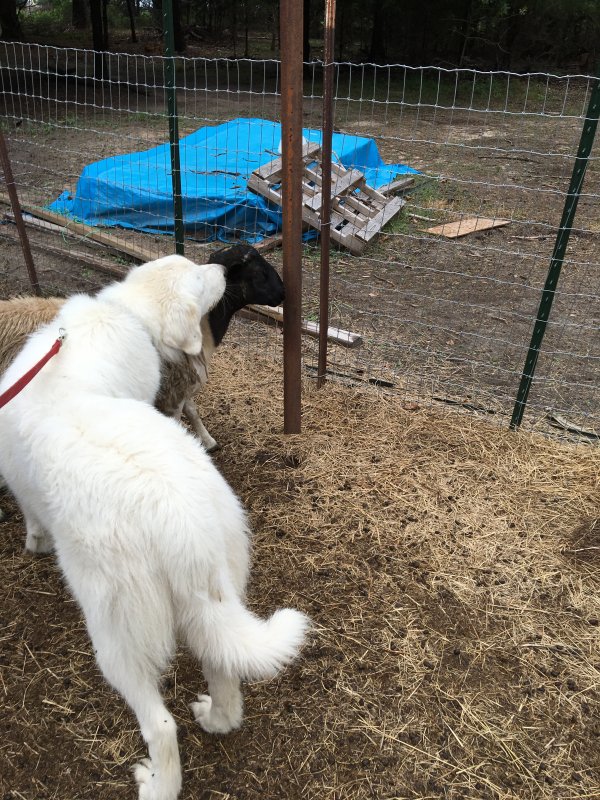