Hi all,
I just got a job mucking out stables in exchange for riding/horsemanship lessons. I lived in the city up until about 3 years ago, so although I have EXTENSIVE experience training and working with dogs, cats, and rabbits, ( I worked as a trainer in an animal shelter), I have zero experience working with horses. Except for a few times riding as a kid/teen, maybe once a year.

They are just going to start me leaning about tacking, grooming, and basic horse behaviors. The head trainer uses the Parelli method, which from what I read is controversial. It sounds good in theory, but I know a lot of people have issues with him.

As a dog trainer I practiced positive reinforcement training and I carry that belief with me towards any other animals I have worked with. But I know horses are larger and may require me to be more assertive.

Any tips? On clothing for working, what to bring, starting to work with horses and eventually riding?

Welcome to BYH!
Let's see JEANS, I like wranglers... men's as women's aren't as heavy duty. and Ariat boots. Staying calm around horses is a must as they will feed off of your moods/anxiety. There's a place for both positive and negative reinforcement training. For example my Mom's horses are constantly getting in her space, you fly spray them and they walk into you, you take them somewhere new and they're on top of you because they are nervous. Drives me nuts... EVERY time they do this I back them and they better do it quick... they don't do this to me too often anymore. But they still do it to Mom... It's not a commonly known issue like kicking or biting but it's still dangerous. All of my horses can be handled by my 4 year old, ground manners are SO important if they don't respect you from the ground they sure won't when you're riding.

When you buy a horse, make it an older, seasoned calm horse. You want a been there done that horse. Don’t buy a young inexperienced horse.
M

Horses are large & can hurt you just because of that fact. Learn their mannerisms, learn to "read" them. Learn their behavior.

Control their head -- large as they are, if you have a good hold of that halter you will find more control of their body. True if being lead or if tied. As Promiseacres says, using back up fast & well can sure get their attention when doing something wrong. Again, behavior-- they have to back from another horse correcting it. YOU are the "other horse". A firm yank on a halter and a verbal "stop" will normally correct small things they may do while handling.

As with dogs, use same voice, command words, etc., always praise good efforts, etc. Horses are usually more receptive to a good neck scratch reward than food treats (like a dog gets) and you don't want them looking for a snack! This can lead to nibbling fingers.

A mare will nip a foal on their shoulder, just above their leg as if a "smack" for bad behavior. Often a tap or poke there will work. REALLY depends on what you are doing or teaching at the time. Always speak as you approach...to prevent startling as they are prey oriented.

Definitely need good jeans, steel-toed boots, bring LOTS of drinks...you'll sweat more than you can imagine when you're working with horses...it's hard work!!
I'll try to think of some more things

I've heard of people who try to use positive-reinforcement-only type training with their horses, because they want to be their horse's friend, and I have often wondered how that works out for them long-term. Because this is how horses treat their friends: 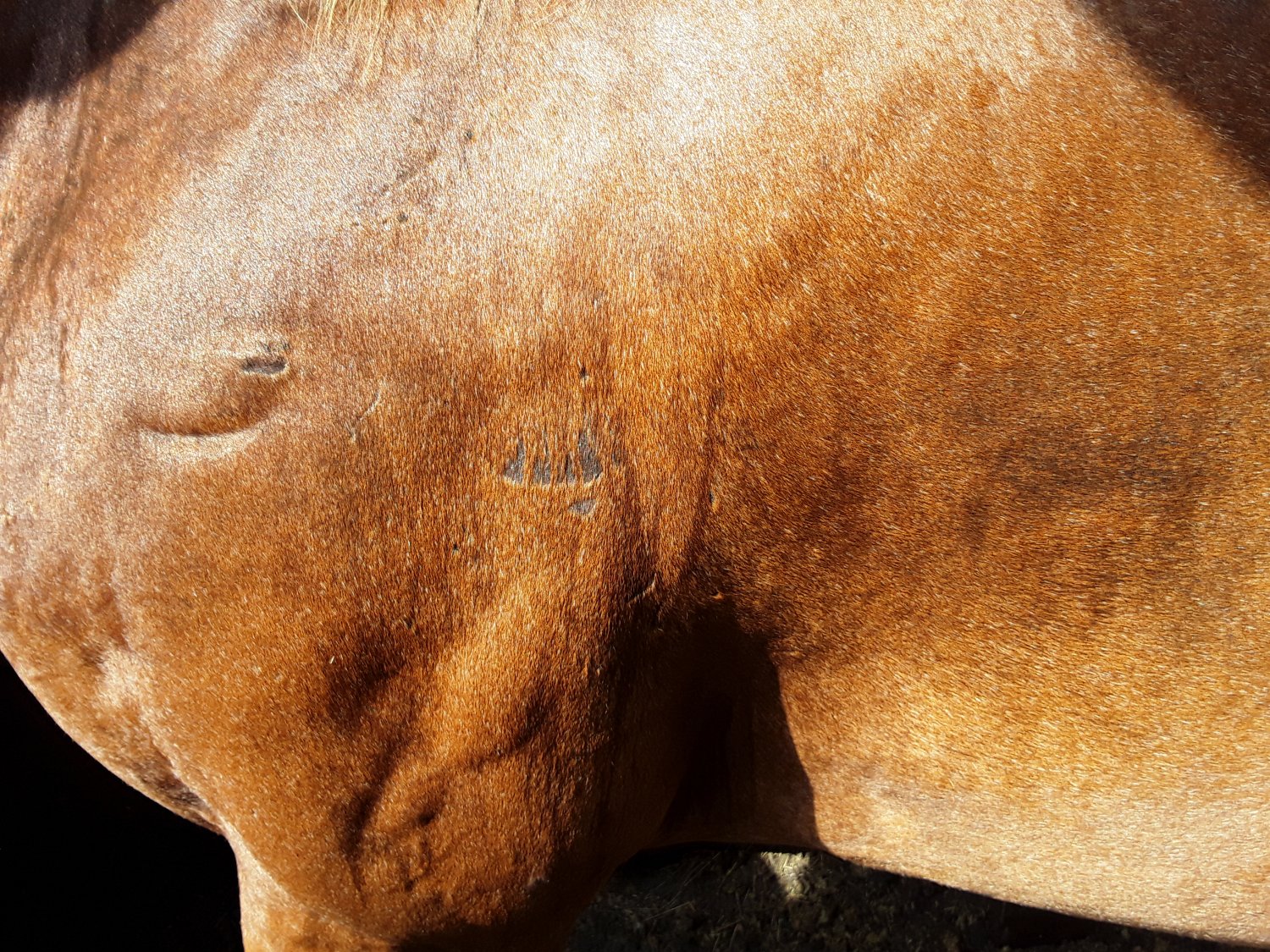 (That semi-circular mark is a permanent reminder of a kick from years ago, but how many bite marks do you see? I see at least 3, and these are middle-aged mares, not rowdy young geldings!)

The problem with "reward the positive, ignore the negative" is that horses never think, "OK, we have thrashed this out, and you are the supreme leader henceforth and forevermore." In a thousand little ways, a horse is constantly testing to see if the leader is still the leader. The problem with ignoring the negative behavior is that the horse reads that as, "oh, I can get away with this," so it then tries something else. If you get kicked or bitten by a horse, you may not have seen it coming, but it didn't come out of nowhere. The horse has been working up to it, either with you or someone else, and it was only when it got that bad that it was recognized for the lack of respect that it represents. These are thousand pound animals that can kill us without even trying, and we have to be mindful of that. You don't have to be a bully, but you need to cultivate an aura that says, "you really don't want to go there." I worked as a feeder at a barn for a few years, during which I wound up handling something in the neighborhood of a hundred horses, and every blessed one of them had a go at me in one way or another - some, a lot more times than once! Mostly, they were small acts of disrespect, which only required small corrections (feeders aren't "trainers," so are seen as easy targets by the horses), but lest you think I was mean, I was also the only person who could catch some of these animals in the pasture. Horses understand firm but fair, and actually appreciate it; when they respect you, they trust your judgement, and don't have to do too much thinking for themselves. It's a matter of safety, the horse's as well as yours (it takes a lot of trust and respect to put yourself between two gelded 'band-stallion-wanna-be's' that have decided to battle over a group of mares, and lead one off before anybody got seriously hurt).

Incidentally, Sunny has an Olympic-caliber talent for just ignoring pressure, which is probably why she is sporting so many bite marks. I used to think that Latte was just a bully, but having had to "ramp it up" on Sunny countless times, I've decided that most of the time, Sunny has it coming.

As for gear, I'm not sure I'd go with steel-toed boots. I've talked to people who have seen those things cut off of people's feet when they got stepped on.