Been a while since I've been on here, but I got some goos new! My Hereford mama finally had her calf, a little heifer! This is her 2nd calf. She's a great mom too. As soon as she had her she got right to work and was right up cleaning her off. Calf was up within 20 or 30 minutes. She's got a good sucking reflex and was nursing a little within the hour! I think she's gonna be just fine! 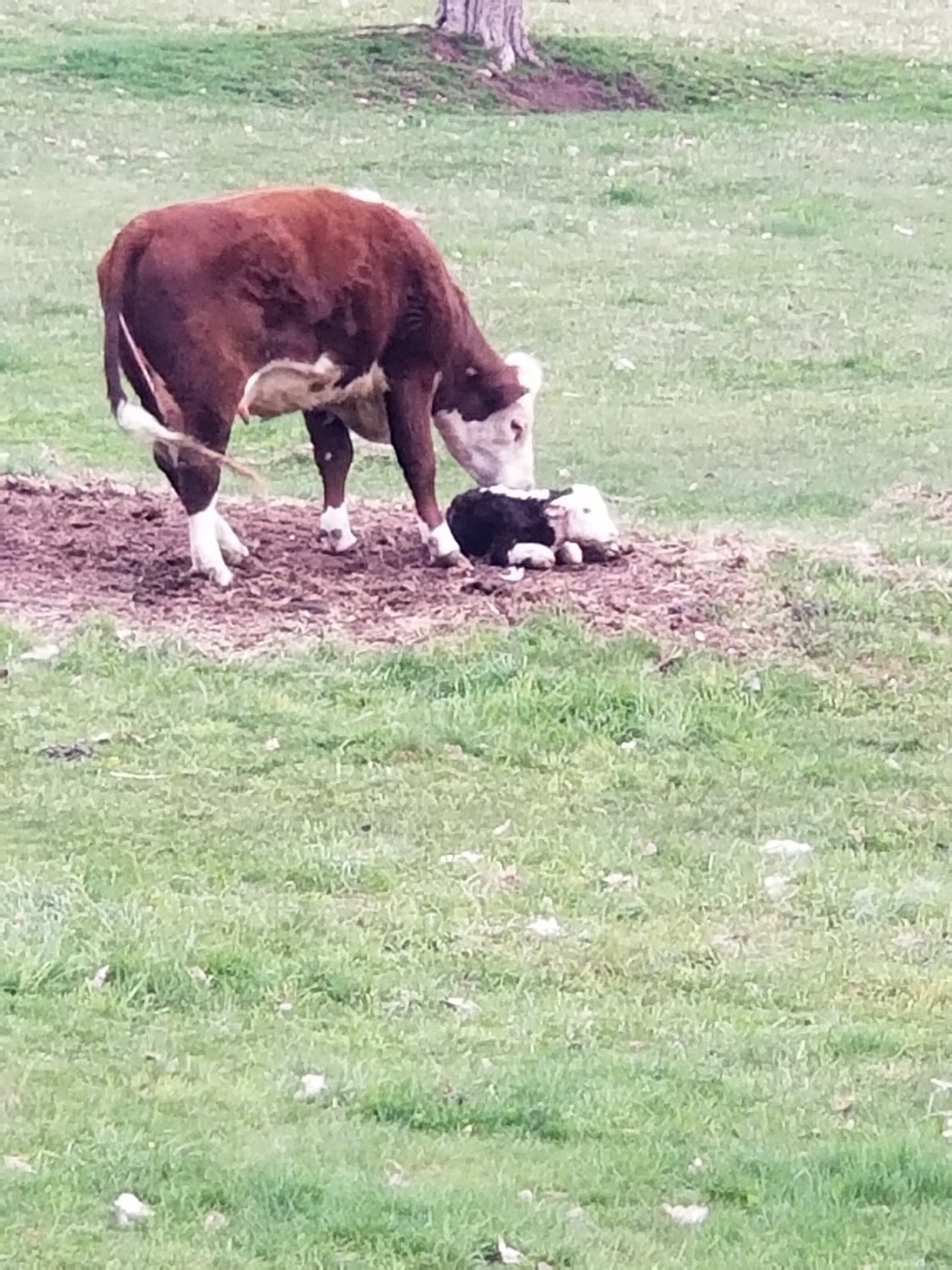 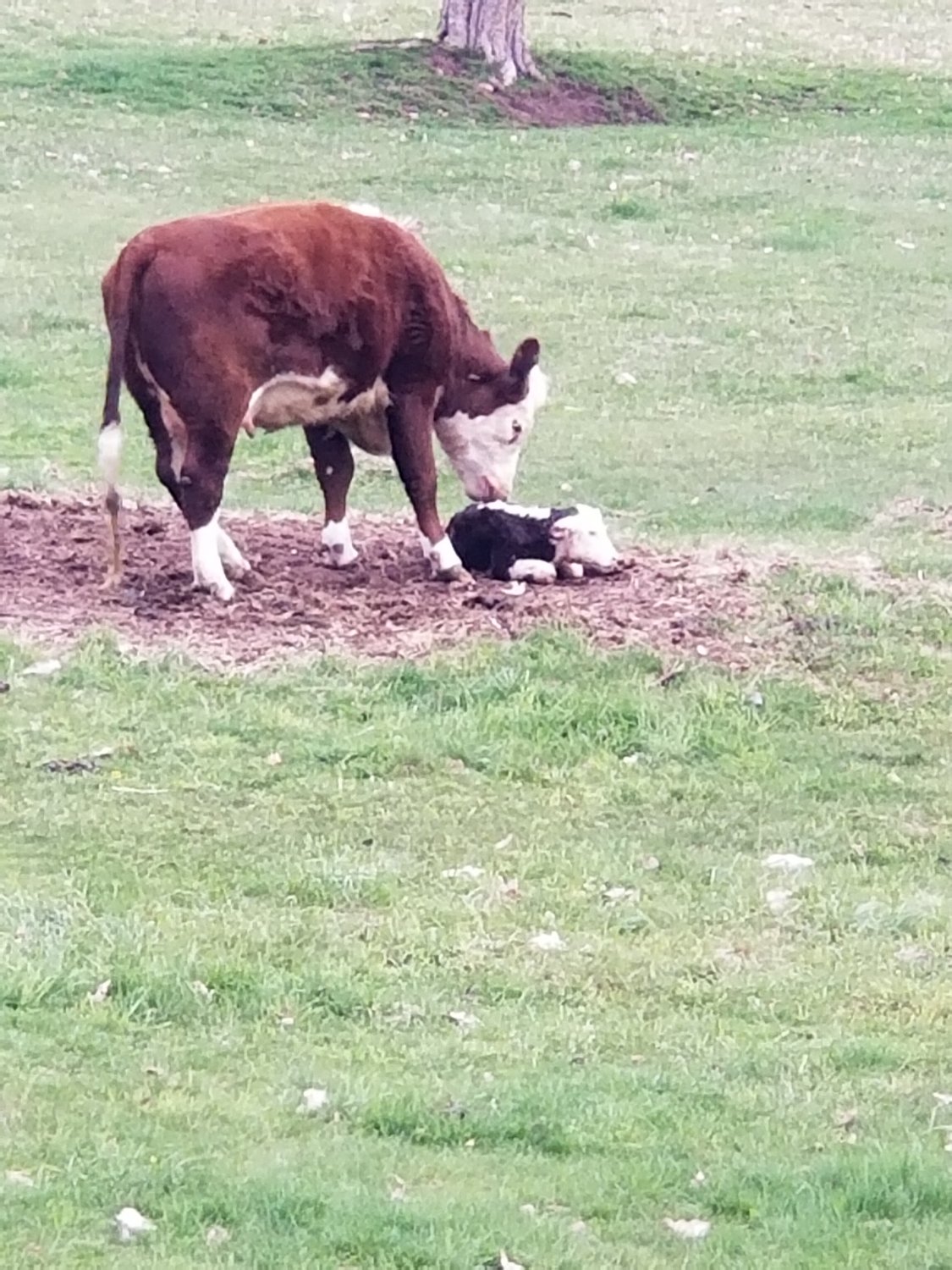 Congrats on a good calving result!!! Feels good when everything goes right and a fine heifer to boot!

I like Herefords. One of my favorite cows. I like the color so much, I even find Hereford Hogs to raise as feeder pigs. LOL

Welcome back..... glad that it was a successful calving and a heifer to boot. Congratulations.
G

Congrats and a great start for your new calf.

I spoke too soon. Turns out my little "she" is in fact a little "he". The problem I'm having now is the orphan calf that mama raised last year started nursing off of her again! It's really pi**ing me off!! She was supposed to be sold by now but I keep getting the run around from the buyer. Is this just a phase or is she likely to continue to nurse? 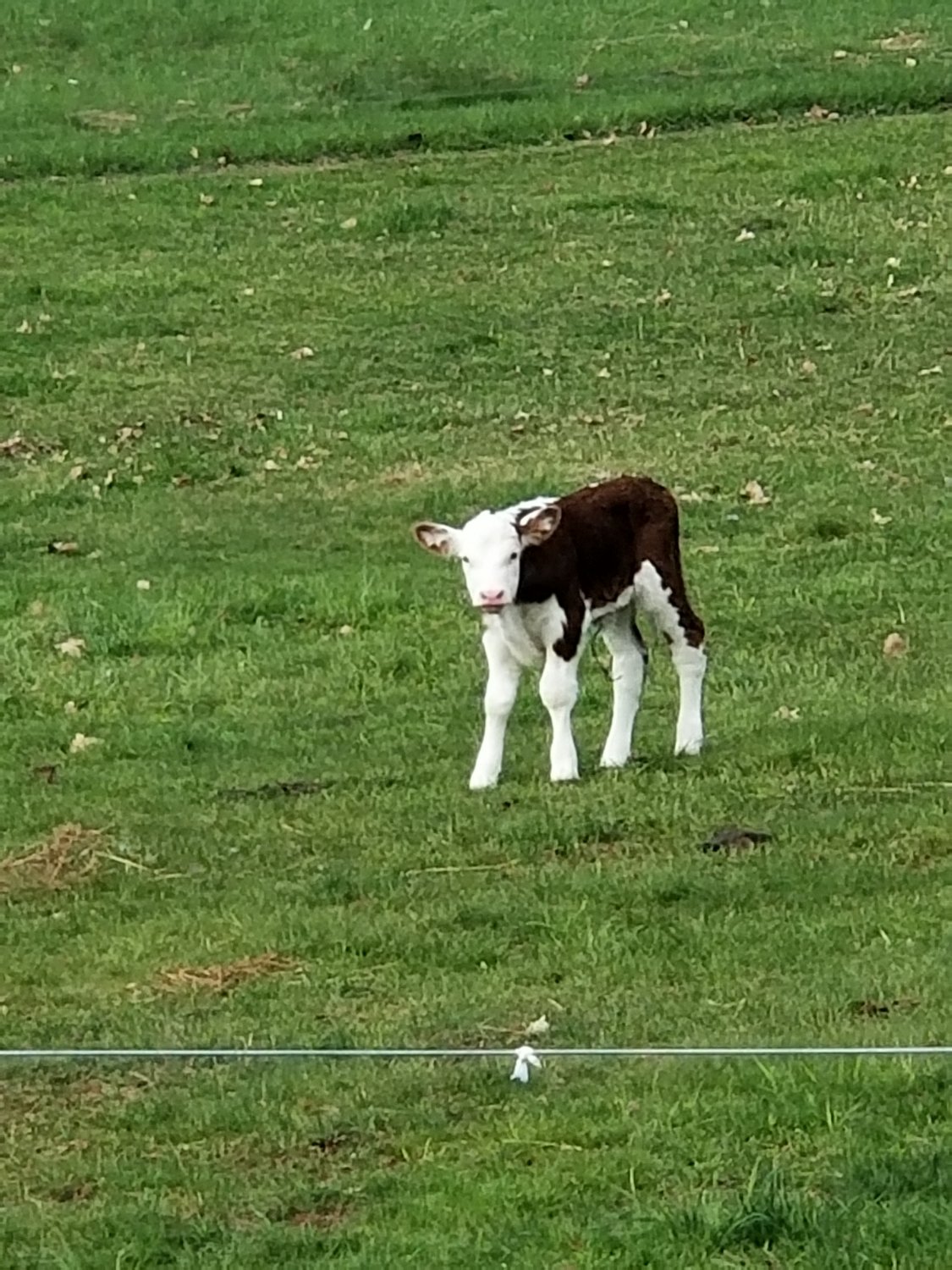 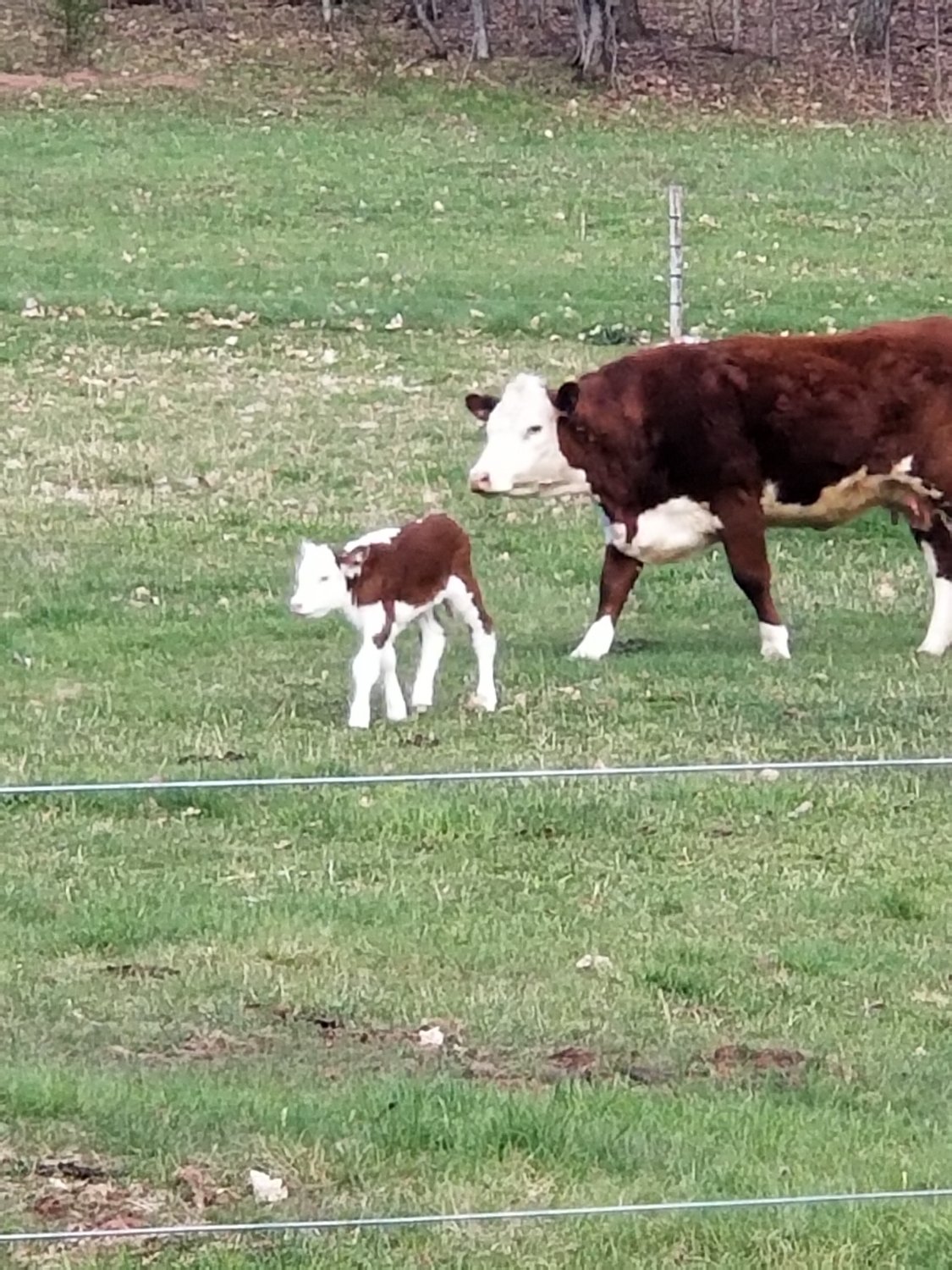 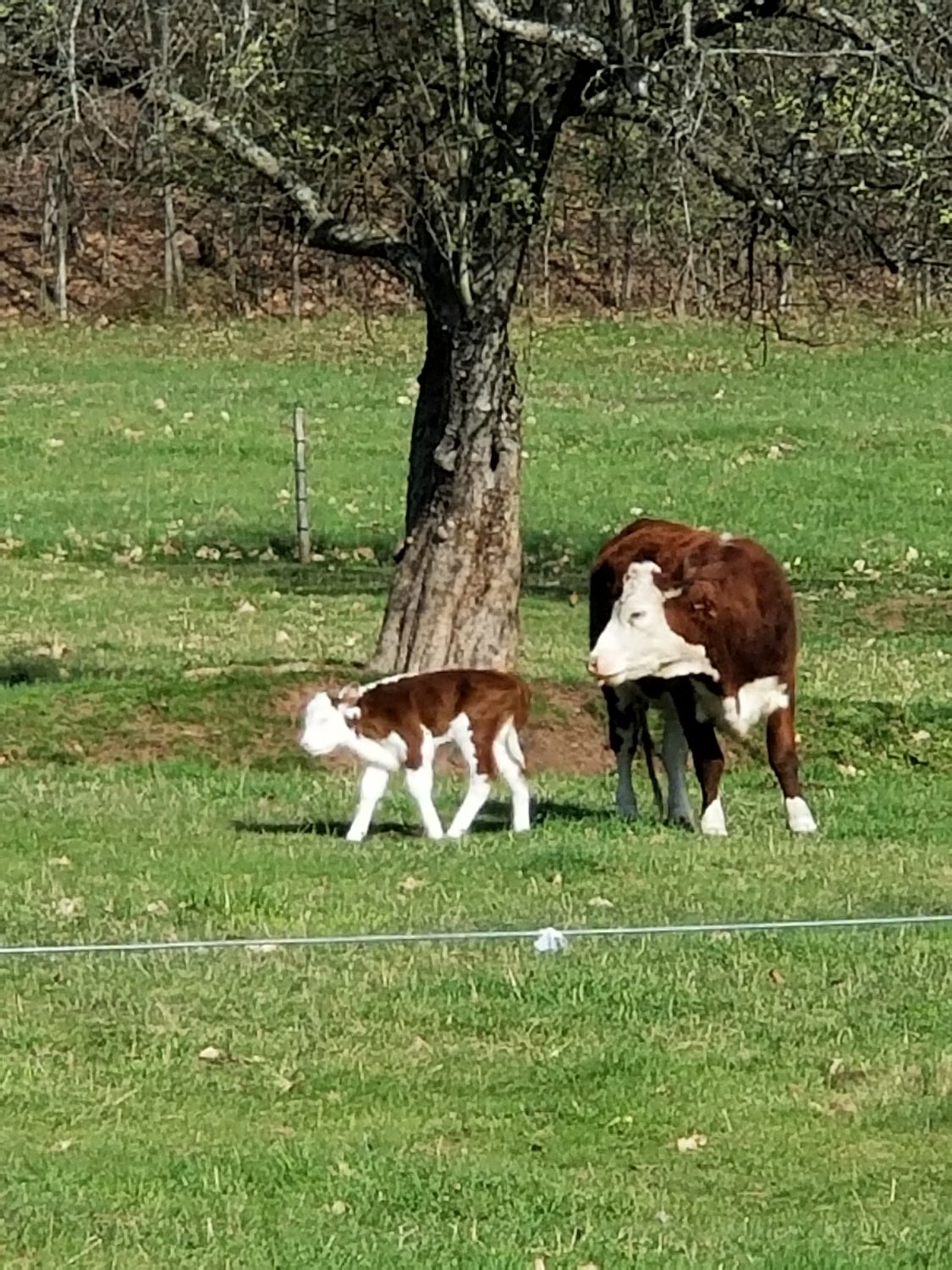 All dried off that’s a real looker. Last years calf will probably continue unless you separate them.

Grant said:
All dried off that’s a real looker. Last years calf will probably continue unless you separate them.
Click to expand...

Thanks Grant! I think he'd make someone a nice bull if I could find a buyer early enough, otherwise I'll have to steer him. The yearling heifer is going down the road soon enough!

Make him a steer and raise him for the freezer.
F

She will keep nursing. And like one of the ones I have, if you were to keep her and breed her, she may even nurse the cow while her own calf is nursing. Mine was weaned and totally away from the other lactating cattle for over a year while she was getting bred .... then calved and now we have caught her nursing other cows while her own calf is right with her... She is going....
You can get a "nose flap" and they also make an anti-nurse ring that goes in their nose like a nose lead and it has spikes on it so every time she tries to nurse she will get kicked.... but then the momma might not let the new one nurse. Anything that gets weaned needs to be kept away from any other cows that are nursing/lactating...... Then when they calve themselves, they should pretty well have outgrown nursing. Like mine though, it doesn't always happen.
Weaned young should not run with mature animals that are nursing other calves. They may do it "in nature" but I can tell you there are more cases of yearlings nursing than alot of people think.
Separate her somehow, so the calf gets what it needs.
Give the buyer an ultimatum, and then ship her or pen her separate if they don't come through. Let me tell you from MANY LONG YEARS of experience.... they either want it or they want to hem and haw..... Being the nice guy is costing you feed and time and now it is costing the new calf the milk it should be getting to grow.
Find a stockyard and sell her. Get paid that day, no questions asked. Might not be what you want, might be more than you thought.... but it will be gone and the aggravation will be done.
You must log in or register to reply here.
Share:
Reddit Pinterest Tumblr WhatsApp Email Share Link